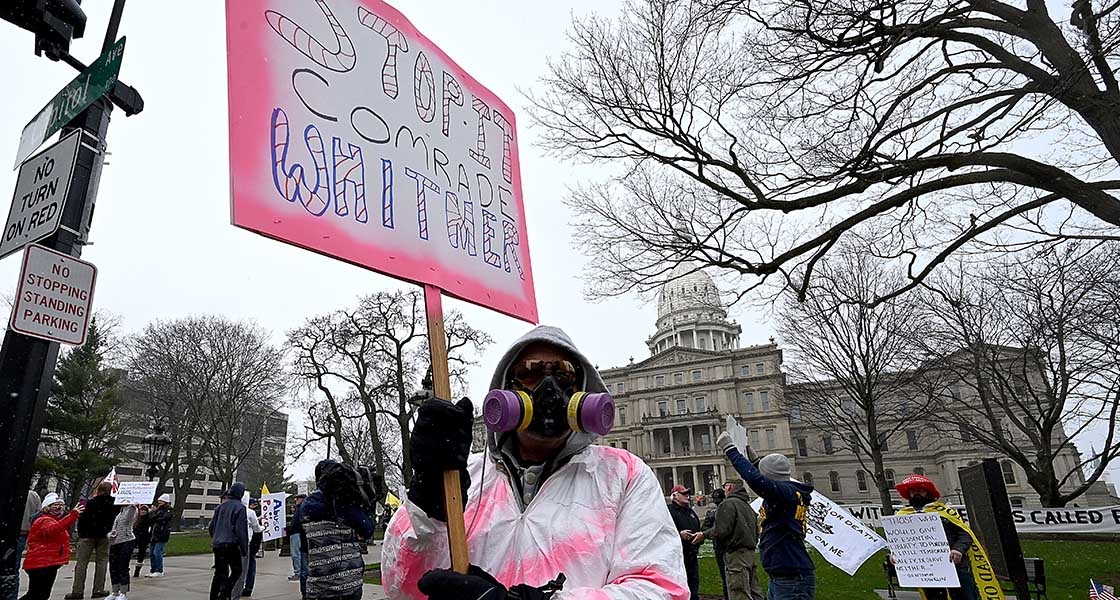 In hindsight, the protest signs with nooses outside Michigan’s Capitol might have been a warning.

Or the state Senate Majority leader calling her a dictator.

Or the president of the United States extolling protesters on Twitter to “LIBERATE MICHIGAN.”

The alleged plot to kidnap Whitmer and storm the Michigan Capitol with 200 armed militia members followed months of provocative, sometimes violent rhetoric against the governor, who imposed a long list of pandemic-related executive orders last spring to try to limit the spread of the virus.

Those steps, from stay-at-home orders to the closures of most of the Michigan economy and its schools, led to angry all-cap tweets from state and national figures, and numerous armed protests at and inside the Capitol.

It was at one of those protests that two men arrested Thursday met.

The series of events doesn’t surprise Jon Lewis, a research fellow at the George Washington University Program on Extremism, who has tracked a surge of domestic anti-government violence and threats of violence since the pandemic.

“The lockdown has been a lightning rod of sorts for these anti-government types,” Lewis told Bridge Michigan on Thursday. “It’s emboldened some, and some who wouldn’t have been driven to violence before.

“For some of them, it’s easy to go from First Amendment protests to plotting to kidnap a governor” they consider a tyrant. “This type of lockdown and government control, it flicks all the warning lights in their heads.”

Those warning lights began flashing within weeks of the first confirmed cases of the new coronavirus in Michigan in March.

By early April, Whitmer had issued a series of unprecedented executive orders, from closing schools and indoor dining at restaurants, to mandating residents stay in their homes unless they were essential workers.

You can buy a bumper sticker with Whitmer’s image and the word “tyrant” on Amazon. (Screen shot)

Initial, begrudging acceptance of the executive orders by state Republican leaders began to ebb. They and others noted some studies showing that economic shutdowns take their own tolls, both physical and emotional.

On April 30, armed demonstrators entered the Michigan Capitol with rifles as part of a protest against Whitmer’s COVID-19 orders. Some protesters carried Confederate flags. One sign declared “Tyrants Get the Rope.”

The heated public rhetoric was boiling hot on social media. Members of private Facebook groups called for Whitmer to be hanged or beheaded.

In May, Michigan Attorney General Dana Nessel warned the Michigan Capitol Commission, a bipartisan group that oversees operations of the Capitol, that the commission would have “blood on their hands” if it failed to ban guns from the Capitol.

The commission had been asked to ban guns in the building, as they are banned in many other state buildings, after armed demonstrators entered the Capitol in April. It turns out, at least two men arrested Thursday were among the armed people at the Capitol that day.

The commission has so far declined to ban firearms and appeared willing to stand pat on Thursday, after the conspiracy charges were announced.

As protests escalated, Whitmer began drawing criticism from conservatives nationally. On May 27, conservative national talk show host Dan Bongino posted on Facebook, “Gov. Whitmer is a tyrant.” A comment from a Michigan resident called for rebellion against Whitmer, and a commenter from Wisconsin posted a meme displaying three nooses, overlaid with text reading, “Noose flash, treason still punishable by death.”

Two days later, Turning Point USA, a conservative nonprofit organization, posted a video titled “Michigan has a message for tyrant Gov. Whitmer” that showed clips of anti-Whitmer protesters in front of the Michigan Capitol building. Among those interviewed were four young men wearing Hawaiian shirts – the uniform of members of the far-right Boogaloo movement – carrying long guns. The host of the video points to the men and says, “This is the future that President Trump wants.”

At an “American Patriot” rally at the Capitol on June 18, several people later arrested for plotting to kidnap the governor met for the first time, according to an affidavit by federal authorities unsealed Thursday.

State and federal officials announced Thursday that 13 people had been arrested in the alleged plot to kidnap Whitmer and overthrow the state government. Several of the men now in custody had allegedly surveilled Whitmer’s Northern Michigan home in preparation for a kidnapping attempt.

Kelsey Snyder, daughter of former Gov. Rick Snyder, tweeted that she was “tearing up” watching Whitmer’s news conference Thursday after the arrests, as she recalled death threats made against her father when he led the state.

“I remember frantically scrolling Twitter seeing death threats and hate against my father,” she wrote. “These politicians are HUMAN. They have families. Several years later reminiscing makes me feel sick. We must do better.”

Shortly after the arrests were made public Thursday, Shirkey, the Senate Majority Leader, wrote on Twitter that “a threat against our governor is a threat against us all.

“We condemn those who plotted against her and our government. They are not patriots. There is no honor in their actions,” Shirkey wrote. “They are criminals and traitors and they should be prosecuted to the fullest extent of the law.”

Shirkey took a different tone just hours later, speaking at a rally at the Capitol protesting pandemic restrictions. Shirkey told the crowd “this is no time to be weak in our commitment to freedom. We need to be strong … and not be afraid of those who are taking our freedoms away from us.”

For her part, Whitmer implied Thursday that President Trump bore some blame, saying he is “giving comfort to those who spread fear and hatred and division.”

“If we want to talk about hatred,” Miller said, “then Governor Whitmer, go look in the mirror.”