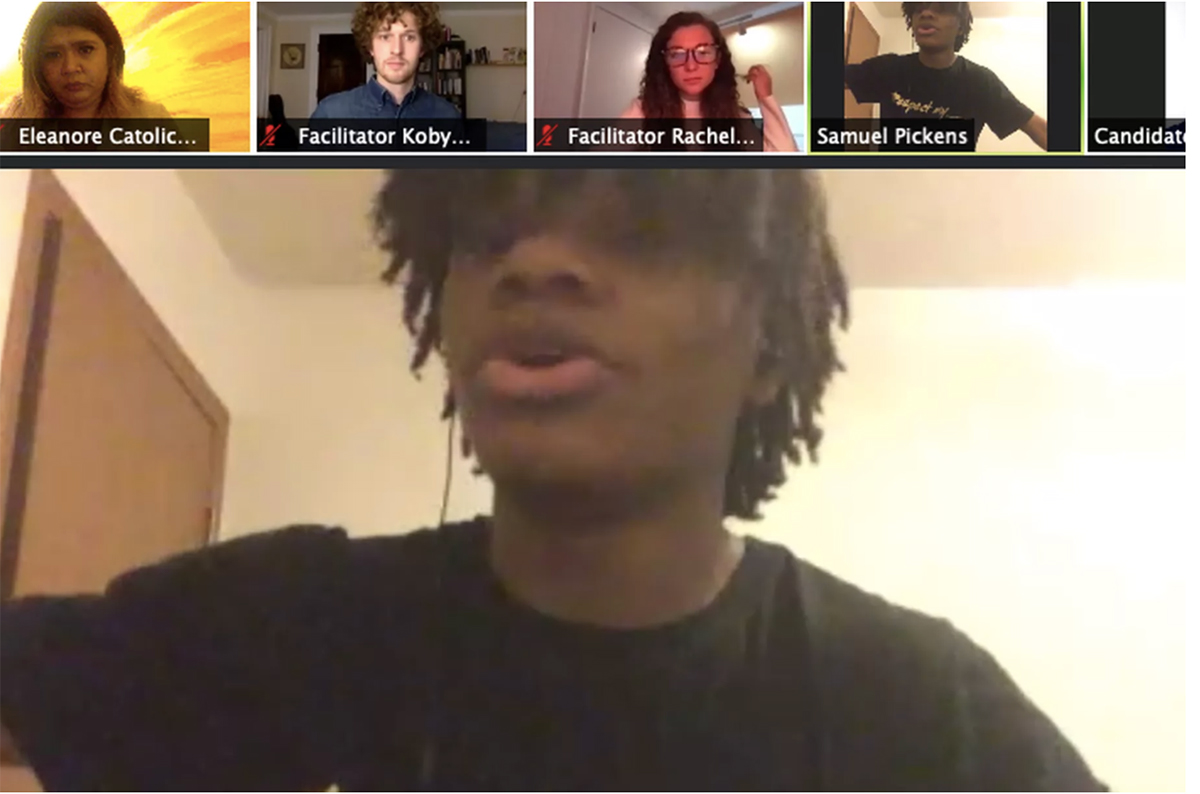 Samuel Pickens, a student at Detroit School of Arts, asked school board candidates how they can help schools get better resources and technology during a virtual candidate forum last week. (screenshot)

Detroit School of Arts student Unique Pierce told a school board candidate just how tough it’s been to weather the stresses of virtual learning during this unusual school year.

She feels the heavy load of assignments piling on her plate. She had to get a stronger prescription for her glasses because too much screen time strained her eyes.

“The pandemic has been economically, emotionally, and physically draining,” she said.

“What can you do to help students’ emotional needs?”

Pierce, along with other Detroit district students, grilled school board candidates on how, if elected, they’ll better support student success during a virtual candidate forum held last week. The students asked about navigating the academic challenges of online learning, policing in schools, and updated learning resources and technology — all areas the school board has the authority to change.

Fourteen candidates are vying for three spots on the Detroit school board in the Nov. 3 election.

Eleven candidates participated in the event, hosted by CitizenDetroit, Bridge Detroit, and Chalkbeat Detroit. Participants pitched their vision to students, parents, teachers, and other school community members. The event had a “speed-dating” format. Pairs of candidates were moved to different breakout rooms using Zoom, a video conferencing application. Candidates answered questions from some of the 120 people who were watching and listening in the breakout rooms.

Renaissance High School student Yamah Bah-Deh told school board president Iris Taylor that she is frustrated with the online school schedule. Bah-Deh said she spends too much time looking at a screen.

Bah-Deh also wants better communication between the district and students. Taylor explained that when considering issues like screen time and the school schedule, school officials have to weigh student learning needs and also the state’s attendance requirements. The district is holding focus groups, including students, to address these complaints. “It’s creating that balance that’s necessary,” Taylor, a former healthcare executive, said.

“I would call for more investment and appropriation to address the mental health needs” of students and parents candidate Sherry Gay-Dagnogo said. Gay-Dagnogo is a state legislator and a former teacher. She also called for more counselors in schools.

“You can’t get emotional needs through a screen,” he said.

Candidate Zsa Zsa Hubbard is a community advocate and DPS alumnus. She told Pierce that she would recommend using software designed to help students signal to teachers if they’re struggling or feeling out of sorts during online school.

“This is your education,” Hubbard said. “One of the things that teachers, staff, and administrators have to understand is that you all have an opinion too. You all have things you have to deal with on a day-to-day basis. Teachers and staff need adequate training when it comes to emotions.”

Another DSA student, Samuel Pickens, was frustrated with a lack of updated textbooks and technology, comparing his experience as a district student with those in more affluent schools.

“There’s a big gap between who’s excelling and who’s not,” Pickens said. “I’ve looked in textbooks and information was out of date…what would you do to take action?” The district updated its curriculum last year.

Current board treasurer Sonya Mays, who has a background in real estate and finance, stressed the need for funding equity for schools.

“There is not a clear solution to it. It is gonna take a lot of problem solving. A lot of state level resourcing,” she said.

Students also asked questions about investing more resources in the district’s neighborhood schools, noting that the city’s application schools such as Cass Technical High School seem to be better supported than other schools in the district.

Former school board member and current candidate Ida Short would push for the district to install special academic programs at neighborhood schools to attract more students to attend. The district is already building some special programs at open enrollment schools, including one in aviation.

“It’s important that all of our schools have what they need,” she said.

Cass Tech senior Lamont Satchel Jr. asked current school board member and candidate Misha Stallworth what the board can do to address the negative effects of COVID on families. Stallworth has a master’s degree in social work.

Stallworth highlighted the current board’s work in providing meals to students during the shutdown and the importance of offering both virtual and face-to-face options to families with limited options.

“Communities rely on our schools to do things but we don’t get the dollars to do those things in the same way. That advocacy is really important,” she said.

After the killing of George Floyd, a Black man, by a white police officer in Minneapolis, activists called for the removal of police in district schools. This summer, the board established two public safety panels working to improve officer-student relations. Not all candidates agreed police should be eliminated from schools.

“I don’t believe police belong in schools,” said candidate and longtime activist Elena Herrada. Both Herrada and Short served on the school board when the district was under state-appointed emergency managers. At the time, the board held limited power. Herrada believes over-policing could lead to the criminalization of more students of color.

Hubbard disagreed. Some schools need police, but students and staff should feel safe and protected.

“They need to know that the police officers have their back not have a bullet in their back,” she said. “Certain situations don’t have to escalate if communication is in place.”

Here is the full list of school board candidates.

LaMar Lemmons, Terrance Lemmons, and Richard Carl Clement did not participate in last week’s’ virtual candidate forum. Vijay Virupannavar has dropped out of the race.