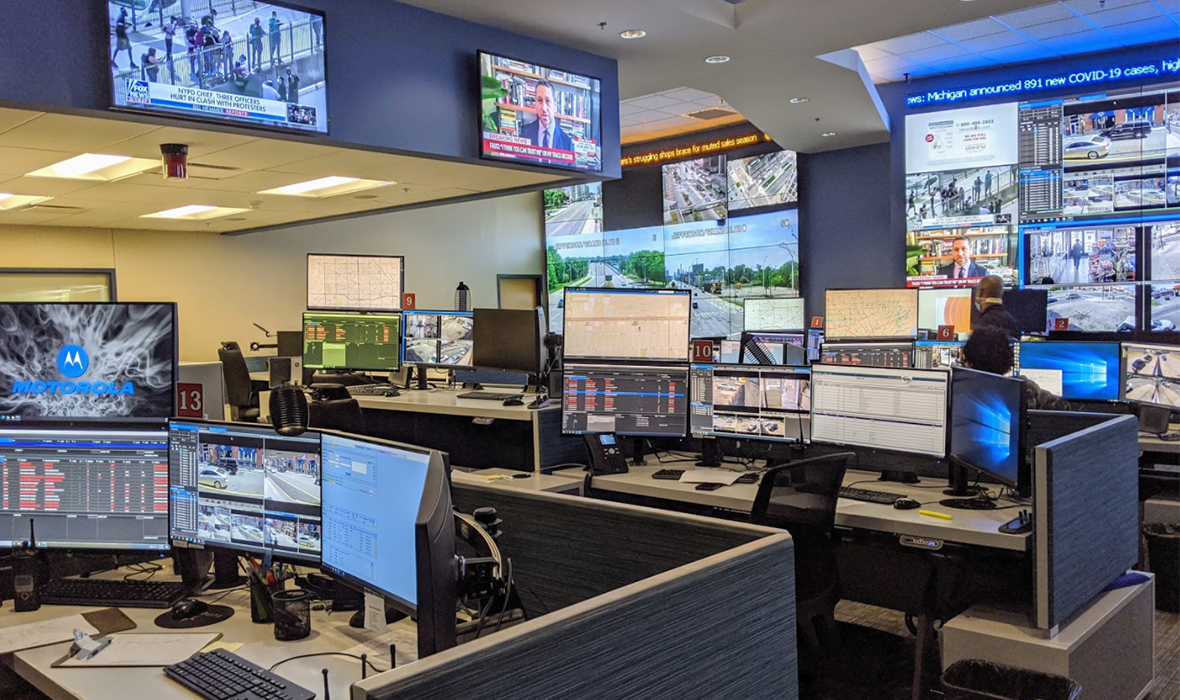 The Real Time Crime Unit must report each week on how many facial recognition requests it fulfills, what crimes it is investigating, any software updates, and any policy violations. (BridgeDetroit photo by Bryce Huffman)

When solving a violent crime, Detroit police use facial recognition technology to compare pictures of a suspect with a database of images culled from public records, social media and other sources. The software is supposed to provide matches based on facial features, but it is known to misidentify women and Black and Brown people, in particular.

The controversial technology has been the subject of debate at City Council meetings and Board of Police Commissioners (BOPC) meetings since the City Council first approved a two-year, $1 million contract for facial recognition software in 2017.

“We have leveraged facial recognition surveillance against Black residents, despite the fact that the technology is racially biased and being banned in predominantly white cities,” Tawana Petty, the national organizing director for Data 4 Black Lives, said at a Detroit City Council meeting last year.

Facial recognition technology became a highly contentious national issue last year when the Detroit Police Department’s use of the technology led to the wrongful arrest of Robert Williams.

The city renewed the contract last fall, despite growing concerns over civil rights violations, and Detroit police use the technology at its Real Time Crime Center downtown. However, the department can use the technology only under specific guidelines, per the policy the BOPC approved in 2019.

The Detroit Police Department publishes weekly reports about its use of facial recognition technology, which has expanded its pool of possible suspects, mostly Black men.

Here’s a look at how DPD has used facial recognition so far this year.

Over a third of facial recognition searches are a ‘no match’

So far this year, DPD has used facial recognition software to generate a total of 69 leads. Of those leads, 26 have come back as “no match” — meaning the software could not identify a match with any of the images in its database.

Detroit police have, however, expanded its pool of suspects 63 percent of the time.

Phil Mayor, senior staff attorney with the ACLU of Michigan, says the high rate with which DPD uses facial recognition to search for Black male suspects “caught my eye.”

“So, essentially, this is being used almost exclusively against Black men,” Mayor said.

Critics of facial recognition often point out that the technology is notorious for misidentifying Black and Brown faces. A National Institute of Standards and Technology report from 2019 found that facial recognition algorithms work overwhelmingly better on middle-age white male faces than on any other demographic.

Last year, IBM, Amazon and Microsoft announced they would pause or end sales of their facial recognition technology to police in the United States, in part because the technology misidentified darker faces more often than white faces.

Fox 2 Detroit reported last week that a Black teenage girl was turned away from a Livonia skating rink after being pinged on its facial recognition software. The girl’s mother, Juliea Robinson, told Fox 2 the facial recognition algorithm racially profiled her daughter. Increasingly, stores and businesses are using facial recognition on customers.

Despite those error rates for women, DPD used facial recognition software looking for women seven times this year — or about 10 percent of the time.

On each of the department’s facial recognition reports, there is a section that shows where the source image used in the search came from. Though 29 of the source images used this year have come from the City’s controversial Project Green Light cameras, 25 of the images used came from social media.

Rudy Harper, the deputy chief of media relations for DPD, says these intel specialists do more than just monitor social media. Harper says they are mostly monitoring it for the department’s ongoing drag racing and drifting detail, but the specialists will also monitor social media when investigating shootings, carjackings and robberies.

Nearly half of all searches were for suspects of aggravated assault

Of the 69 facial recognition searches done this year, 34 searches — or about 49 percent —were for aggravated assault suspects. Harper, like others in the department, reiterated to BridgeDetroit in an interview that DPD uses facial recognition software only when investigating violent crimes after they occur.

David Martin, a professor of urban studies at Wayne State University and a research partner for a U.S. Department of Justice-sponsored crime reduction initiative in Detroit, said the weekly facial recognition reports suggest the department uses the software sparingly.

“Looks like a pretty judicious use of the technology, probably for very serious cases where they had few leads,” Martin said in an email to BridgeDetroit.

Martin points out that the number of searches DPD made in its facial recognition software accounts for only about 1 percent of the city’s violent crimes this year.

You can find this report and the other weekly facial recognition reports on the Board of Police Commissioners website. How do you feel about DPD using facial recognition? What more would you like to know about their use of this technology? Let us know your thoughts on Twitter @BrideDet313. Don’t forget to subscribe to our free biweekly newsletter.