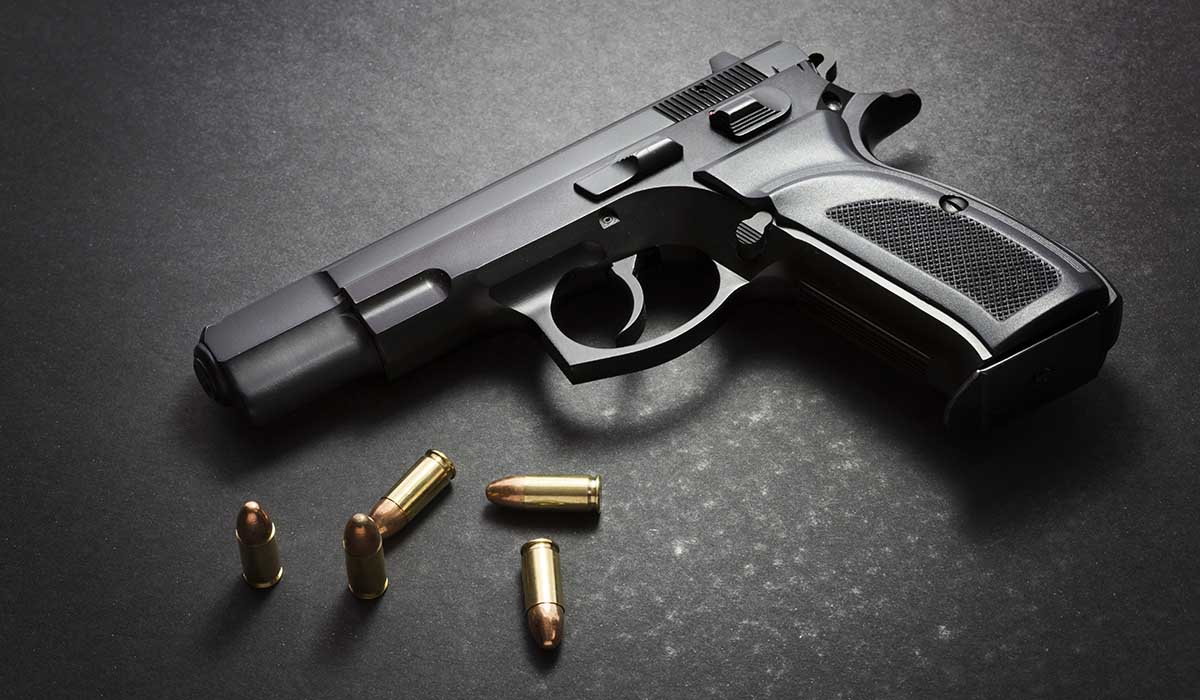 This post has been updated to note the correct spelling of Sherlyn Fleming’s name.

Detroit has a history of violence. The city routinely pops up on the FBI’s most dangerous cities list. And it often comes in the top three cities for murder per capita. The police chief, [James Craig], has talked about recent upticks in fatal and nonfatal shootings this summer. So today we want to talk about gun violence, but this isn’t a story about law enforcement. This story is about three mothers who have all lost a child to gun violence. This is a story about loss. 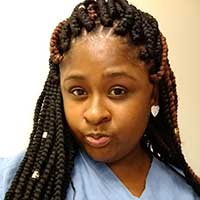 Sherri Scott: Francesca was a bundle of joy.

BD: This is Sherri Scott. She’s telling me about her daughter Francesca Marks.

BD: Frankie wasn’t the oldest of her siblings, but Scott says she often acted like it. She says Frankie just wanted to protect everyone else. So she got into a lot of fights growing up.

SS: It wasn’t her battle, people would go get her to help them. And she was always there — she even saved the principal from getting beat up.

BD: Eventually though, she says, Frankie grew out of that. She went from being known as a bully to being known as someone who would feed you. Making barbecue was her speciality.

SS: Every other day, she had burnt me out on barbecue really, ‘cause she kept cooking. She would just cook these big meals all the time. She could work 12 hours a day and still come home and cook a big meal.

BD: Frankie ended up having a baby at 19 years old. Scott says Frankie was nervous about it at first.

SS: Then she just turned into a beautiful mother, woman, hard-working wonderful person.

BD: She went on to have seven kids total. Frankie’s favorite thing to do with her kids was take them to the park. She would start grilling and she would let them run around.

Unfortunately, on a nice warm day last August, Frankie decided to take her kids to the wrong park.

‘On the day of the shooting, how did you find out about it?’

SS: Um, Tamia called me, her twin. Because she was there, her and her twin, she had ran and they was like ‘aww, man’ when they heard the shooting. They, like, ducked, but the babies were still up. She turned around to get her baby, that’s how she got shot.

BD: Frankie had nothing to do with the actual shooting. She wasn’t even near where the shooting took place. But just like that, Detroit lost another innocent bystander, Sherri Scott lost her daughter, and seven kids lost their mom.

Scott says Frankie’s death has had a big effect on the family.

SS: Yeah but the kids are healthy as far as physical, but mentally, it’s hard to adjust. It’s even hard for me to even sometimes look at them because they all look like walking Frankies

Frankie was 30 when she died. Her youngest kid was only 2 months old at the time. Scott says Frankie’s youngest kids won’t ever get the chance to really know their mom.

Unfortunately, Frankie Marks is just one of the many innocent people to die from gun violence in Detroit.

As of this month, there have been 215 homicides in Detroit, which is 25% more than this point last year. 2019 ended with 273 total homicides. And nonfatal shootings are up 53% from this time last year.

With all those shootings and murders, it can be hard to focus on what one family loses every time. But please, take a moment. Frankie was one of 273 murders. This story isn’t about policy or law enforcement or campaigns to end violence. This story is about mothers from Detroit. It’s about the loss that Detroiters have grown so accustomed to seeing.

Scott has only had about 13 months to process this loss. But what about mothers who have had more time to grieve? Justine Thornhill, for example, has had more than 11 years to think about losing her oldest son, Justin, to gun violence. 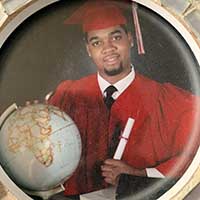 Justine Thornhill: ‘What was Justin like as a kid?’ Funny, silly, outgoing, friendly, He loved to dance, even when he was a kid.

BD: Thornhill sent her son to Roseville public schools, because like many Detroit parents, she didn’t believe the schools in the city were as good.

Despite going to school in the ‘burbs, Justin had a lot of friends and loved to joke with them. Sometimes too much.

JT: He was a silly student, he was silly. That’s what he would get in trouble for lots of times.You know, just cracking jokes, outgoing.

BD: Justin was mostly a “B” and “C” student, but he had a knack for creative writing.

BD: Justin never went on to pursue creative writing in college. That’s because he didn’t get the chance to go to college.

A friend of Justin’s came knocking on the door on an August night in 2009. That’s how Thornhill found out her son had been shot.

JT: So, in turn, me and my husband and my children, we all rushed to St. John Hospital where they had us sit in this room, and when they came back that’s when they told us the news.

BD: Justin was shot and killed two days before enrolling in community college classes. He was only 19 years old.

Thornhill says the days leading up to the funeral were especially hard for her.

JT: Just hurt, angry, you know wishing that I could reverse it like Superman did Lois Lane, but I knew I couldn’t do that. And somewhat blaming myself.

BD: Despite all these feelings, Thornhill says she tried her best to keep it all inside.

JT: I felt that I had to be strong for my other three children because they were young.

BD: Thornhill’s other kids were 14, 9 and 4 years old when Justin died. Similar to how Frankie’s youngest kids won’t remember their mom much, Justin’s youngest sister has few memories of her brother. When the shooting happened, she didn’t really understand death.

JT: Even when we was at the funeral, she stayed at the casket and she said ‘Mama, are we gonna take Justin home? Is he coming home?’

BD: Justin’s other two siblings reacted to his death in different ways. His brother, who was 9 at the time of the shooting, started lashing out in school.

JT: He got in trouble in school a whole lot, like fighting…you know, when he got a little older went through depression, and I had to pull him out of school and have him online school because he was getting Ds and ’s.

BD: Justin’s oldest sister, who was 14 when he died, couldn’t even handle sleeping in their house for a while. Thornhill says she let her daughter stay at a friend’s house for a few weeks.

JT: You know it’s like, people grieve differently. And how I grieved about my son was talking about him, like good things. And she didn’t like that.

BD: Eventually, the family began to adjust to their new normal. A world without Justin. But it took moving out of the city and a lengthy trial that saw the gunman and his accomplice serve time before that happened.

Thornhill says that after a while, she forgave the people responsible for Justin’s death.

BD: She says part of the reason she was able to forgive the shooter was because the case had closure. She knows who killed Justin and she knows what happened to those responsible. But that’s a luxury not everyone who loses someone to gun violence has. 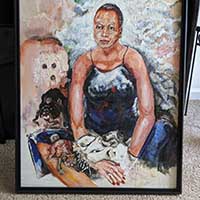 Sherlyn Fleming -A painting of Sherlyn Fleming by her friend Eugene. Fleming worked as a social worker before becoming a police officer. (Courtesy photo)

Doris Fleming: There’s no closure because we don’t know what happened, why it happened

BD: This is Doris Fleming. Back in 2001, her daughter, a retired Detroit Police officer, was picking up clothes from the dry cleaners. That’s when she was gunned down by an unknown assailant. Her name was Sherlyn Fleming.

Sherlyn worked as a social worker before becoming an officer, and during her time as a cop and after, she worked with a youth drug prevention camp in Port Huron.

Her mother is now 90 years old. The shooting happened nearly 20 years ago, but to her, it feels like the shooting was yesterday.

DF: Every day I think about it. Not a day that doesn’t go by, and I just wonder why did this happen to her?

BD: In the background you can hear Sherlyn’s best friend fidgeting with plastic candy wrappers. She declined to be interviewed, but she takes care of Fleming now that she’s older and needs help getting around. She got up during the interview several times to cry or grab tissues.

Fleming says the wound still feels fresh to people who were close to Sherlyn. But it seems, to her, that most people have forgotten about the shooting. She says the police don’t even update her about the investigation.

DF: You wonder, they don’t even call you, they don’t say anything about it or say ‘Well, we’re working on it or  ‘We’ve got some leads.’ There’s nothing. Just nothing.

BD: Fleming says she never calls the police to ask about it. She’s afraid they know details about the shooting that they aren’t sharing with her.

DF: So I’m not gonna keep opening up old wounds and get upset again. Because I got upset when you called yesterday, I was a basket case.

BD: Fleming says she wasn’t upset at me necessarily, just upset that her daughter is gone. She says she misses her daughter every day, but some days it’s even worse.

DF: It’s the holidays that are the hardest for me.

DF: Well we used to have a lot of dinners, my mother and family, but now there’s not a lot of people left.

BD: Sherlyn never had kids of her own, and although she was married at one point, she got divorced and never remarried.

Fleming says on most days she wonders what her daughter might look like if she were still alive.

DF: Doesn’t a day go by where I don’t think about her. It’s something that will go on in here that I’ll do and I’ll think ‘hmm, I guess Sherlyn would be doing this today, she would be doing that today.

Losing people who you were supposed to grow old with is too common for people in Detroit. Sherri Scott, Frankie’s mom, says people need to think more and shoot less.

Scott: Stop the violence. Literally stop the violence because we’re killing our people, you know. They done left these kids here with no mother. Whatever they were fighting over wasn’t worth these kids losing their mom.