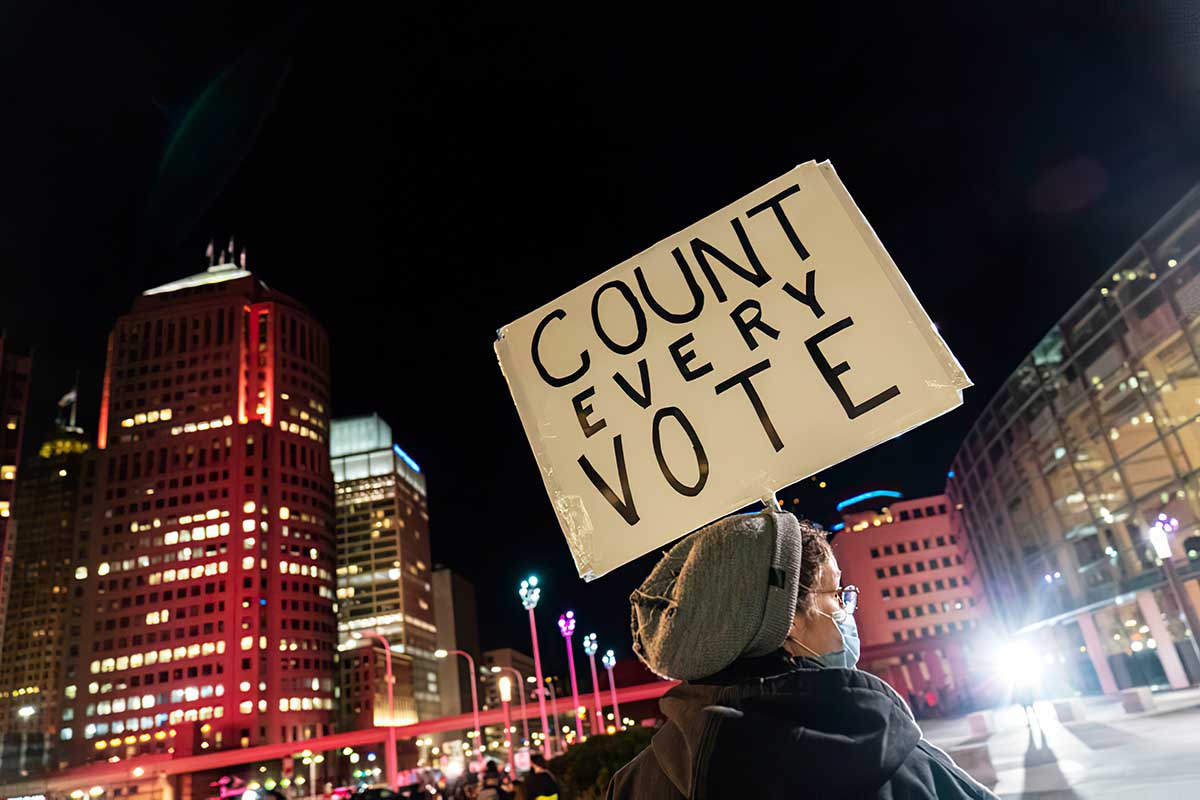 The Wayne County Board of Canvassers is expected to certify Detroit’s election results next week. (Shutterstock photo)

As supporters of President Donald Trump attack Detroit’s elections, the next methodical step in verifying the city’s ballots continues.

At stake are the 250,318 votes cast by Detroiters. The ballots are now being “canvassed” by a group of workers at the Wayne County Board of Canvassers on East Jefferson, near downtown.  The board “canvasses” elections by reviewing forms and certificates filled out by poll workers and officials throughout various stages of the voting process. The paperwork is intended to document the votes cast. The board then “certifies” an election by declaring the final vote totals obtained, the names of the candidates elected to the offices involved, and the outcome of any questions on the ballot.

Stopping that certification is the new line of attack by Trump and his supporters. On Monday, a group called the Great Lakes Justice Center said it would file a lawsuit to block the certification of Detroit’s election. A similar suit was filed in Pennsylvania.

The latest suit is off to a rocky start. Initially, the group said it would file the suit in federal court in Detroit. Now, the group says it intends to file the suit in federal court in Grand Rapids. The suit is on behalf of two Michigan residents who allege Detroit election officials counted ineligible absentee ballots and improperly excluded observers from the ballot-counting process. The lawsuit also contains allegations of a Detroit election worker who contends city employees coached voters to cast ballots for President-elect Joe Biden.

On late Tuesday, Trump’s campaign said it will file a separate lawsuit in federal court in Grand Rapids that also aims to stop county and state canvassing boards from certifying the election.

Last week, a lawsuit was filed by Trump supporters aimed at stopping the counting of ballots — though the counting was essentially over by the time the suits were filed. The suit was dismissed.

The Detroit city clerk and Michigan secretary of state have not commented on the latest suit.  The city’s lead attorney, David Fink, called the latest suit “baseless” on Monday, in several media interviews.

The latest lawsuit has many of the same allegations that Secretary of State Jocelyn Benson  responded to last week, when the chairwoman of the Republican National Committee and others began to hone in on Detroit’s election results.

Joe Biden won 94 percent of the vote in Detroit and won Michigan by nearly 150,000 votes. Trump, however, falsely claimed on Wednesday that it appeared he won Michigan even as votes were still being counted.

After Trump lost the state, he then began to accuse Detroit and other heavily Democratic cities of having rigged elections.

“Detroit and Philadelphia are known as two of the most corrupt political places anywhere in our country — easily. They cannot be responsible for engineering the outcome of a presidential race,” Trump said during a White House speech on Nov. 6.

Michigan officials have defended and praised the state’s election system, which handled record turnout of more than 5.5 million voters, including more than 3.1 million absentee ballots statewide.

On Monday morning, the room in Detroit where the canvassing of Wayne County votes was taking place was at capacity with workers and observers, and both the room and the building were guarded by Wayne County sheriff’s deputies.

The Wayne County Board of Canvassers, like all county canvass boards in the state, has two Republican members and two Democratic members. It’s rare that the board doesn’t certify. If that occurs, it becomes a court battle in which the Secretary of State, the county, campaigns, or even the other canvassers seek a certification.

While lawsuits and unfounded internet rumors swirl around the Detroit election, the canvassing of votes is one step in the bureaucratic process to authentic votes. Facts, not political beliefs, are supposed to guide the vote of the four board members.

“We don’t go through and make sure whether Jane Doe is a legitimate voter, that’s not our part. We just make sure for every ballot cast on the tape that there is an actual ballot there,” said William Hartmann, one of the two Republicans on the Wayne County canvass board.

“Once we certify, any lawsuit or recount gets handled” by others, Hartmann said.

“Our job is ministerial,” said Jonathan Kinloch, one of the canvass board’s two Democrats. “All we do is review and authenticate the forms. All these complaints that people are making of what they believe they have seen or heard, none of that falls within our purview.”

Both Republican members of the county canvass board, Hartmann and Monica Palmer, spent hours at the TCF Center in Detroit last week when absentee ballots were being processed and counted.

The two shared some of their suspicions about the election through their personal social media accounts.

On his Facebook page, one of Hartmann’s posts urges people to look up videos online that allege software used in some ballot machines, along with a computer program, were used to change the ballot counts. The claim is “nonsense,” says the head of the U.S. Cybersecurity and Infrastructure Security Agency.

Palmer is chairwoman of the Wayne County Board of Canvassers. On her Facebook page on Nov. 6, she posted that she seeks any of her fellow Republicans who may have applied to be a Detroit election inspector but was not contacted by city officials for the temporary job. Denying Republicans equal access is one of the allegations being used to depict the Detroit election as unfair.

“I fully expect that our voters will be targeted with false information about their rights and the integrity of the voting process. That our state will be the target of misinformation shared on social media and elsewhere,” Michigan Secretary of State Jocelyn Benson said last week. “Unverified claims of things occurring will be posted on social media, circulated by some news outlets, and candidates may make statements that will be proven ultimately true.”

Donations to BridgeDetroit are being matched dollar for dollar

As reporters in a nonprofit newsroom, the BridgeDetroit team works hard to write the stories that keep you informed about what matters most to our community. Right now, donations to BridgeDetroit go even further! Will you stand up for BridgeDetroit as we prepare for 2021 and beyond?