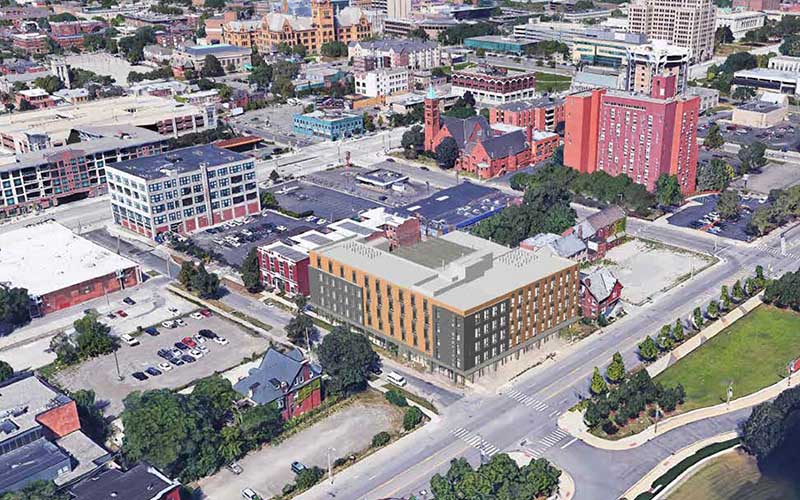 The Sugar Hill Arts District is a $32 million mixed-use development that has affordable housing for veterans and leases commercial space to women-owned businesses. (Develop Detroit rendering)

Sonya Mays walked up and down the North End streets in June pointing to houses and an apartment building that her nonprofit, Develop Detroit, has built. The group’s mission is to deliver accessible and affordable high-quality housing for people across income levels.

As she walked, Mays talked about the importance of community engagement when entering a neighborhood with longtime homeowners. Residents in the North End told Mays’ team the new homes needed pitched roofs and front porches — so they were added to the homes Develop Detroit built in the neighborhood.

That’s important in Detroit, where longtime residents have questioned whether developers consider their wants and needs before building properties with price tags well above what most Detroiters can afford. The City’s Planning Department has hosted dozens of community meetings to ask residents for input on neighborhood improvements, but a lack of trust and mismanaged timelines have Detroiters asking: when will we be able to afford the new Detroit?

That remains unclear, because what’s affordable according to federal housing guidelines and what’s affordable to Detroiters is very different. As the City works on long term strategies to address neighborhood needs, nonprofits are acting where private developers still say there’s too much risk.

“Affordable housing has almost two meanings,” Mays said. “There’s this technical meaning that people in the housing industry throw around and it’s rooted in an actual set of incomes, and then there’s a more casual way that people use affordable which usually just means something that is affordable to them. Though it’s easy for people to personalize, it’s not terribly helpful.”

Residents in one of Develop Detroit’s affordable housing apartment buildings could pay as little as $150 per month. Detroit’s average monthly rent of $1,115 per month has consistently trended $300 below the national average.

However, about 62% of Detroiters are “house burdened,” meaning they spend more than 30% of their income on housing and utilities. The housing cost burden is driven by low incomes, according to Detroit Future City. In the think tank’s recent report, researchers found Detroit’s median household income has only increased from $30,230 to $33,970 between 2010 and 2019. The national median income in 2019 was $68,703, according to the census.

Detroit used to be a city of homeowners, but now more than half of Detroiters rent.

About 20% of Detroit’s rental market is listed at $700 or less per unit. Downtown Detroit has the highest average rental rate at $1,558, although most Detroit apartments are listed between $701 and $1,500.

Mays, who grew up in Detroit and left the city to work in New York and North Carolina, returned in 2014 as the senior adviser to the emergency manager during Detroit’s bankruptcy. At the time, she implemented legal, financial and economic development plans for Detroit. She said private entities and investors can usually outbid nonprofits like Develop Detroit and charge market-rate prices with high returns instead of committing to long term partnerships with the government.

“Going against displacement and gentrification, it’s really hard to compete against somebody who has free access to capital,” Mays said. “They show up with more and they’re willing to do more things with the property that we won’t be able to.”

But Mays, who is also treasurer of the Detroit Public School Community District School Board, said finding solutions to Detroit’s housing problems requires problem-solving and collaboration. 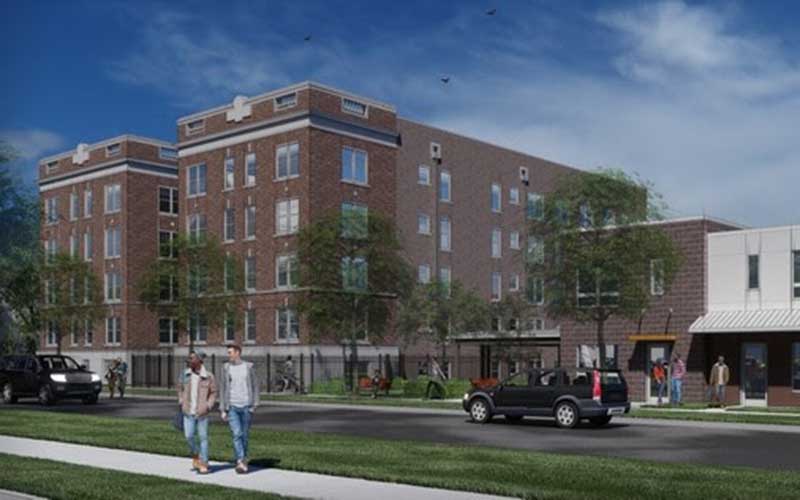 Where Low Income Tax Credits Are Going in Detroit

Julie Schneider, director of housing and revitalization for the City of Detroit, said LIHTC funding is the largest available public funding source for affordable housing.

Six new developments that will provide 517 total units include the AFG Miller site at McNichols and Burt Road, the Preserve on Ash in North Corktown, Woodward Avenue Apartments at Woodward and Glynn Avenue, Brush Park development at Brush and Winder Streets, and the new construction at MLK on 2nd. The Lewis College of Business site is the only structure to be redeveloped and will serve as senior housing through a partnership with Presbyterian Villages .

Each of the new developments will have varying area median income limits, which the city says will ensure mixed income neighborhoods and build equity into the rental housing market.

Schneider said the City of Detroit is working with building owners and developers alike to maintain and grow Detroit’s affordable housing units. The Housing and Development lead said unbeknownst to many residents there are 22,000 affordable rental units in Detroit today. Meanwhile, there are only 18,102 registered rental properties with the City, as landlords failed to comply with new registration rules in 2016.

“We’re trying to preserve them (units) in place, prioritizing those that are at risk of potentially turning the market or becoming obsolete and no longer being able to operate as housing,” Schneider said.

Schneider said that existing affordable housing developments are bound by old agreements with their funding sources. The City tries to identify affordable housing that is about to expire and reach out to property owners and potential community partners early.

LIHTC awards are federally backed funds made available through the state housing agency and can only be used for rental housing. The LIHTC awards incentivize developers with a tax credit for ten years and can help fund up to 80% of a project. In return, developers must offer affordable rates for 30 years to 45 years. Elizabeth Rademacher, LIHTC allocations manager at MSHDA said affordable rates in Michigan have a history of lasting 45 years.

Rademacher said 70 developers applied across the state and the Detroit projects scored among the highest marks for funding.  The LIHTC awards are determined based on a set of criteria that includes neighborhood amenities like access to transportation, parks, grocery stores, doctor’s offices, libraries, schools, employment centers and community organizations.

The allocations manager said the amenities list is not all-encompassing and may not be the best tool to measure for every community, however, the organization finds it helpful based on a state Housing Needs Assessment conducted a few years ago.

“We have had a hard time trying to determine what amenities are necessary or helpful or help contribute to quality of life,” she said.

Two of the Detroit developments qualified for MSHDA’s “open urban” category to build new construction in an urban setting. In these instances, community amenities can be up to one mile away from the site, according to Rademacher. 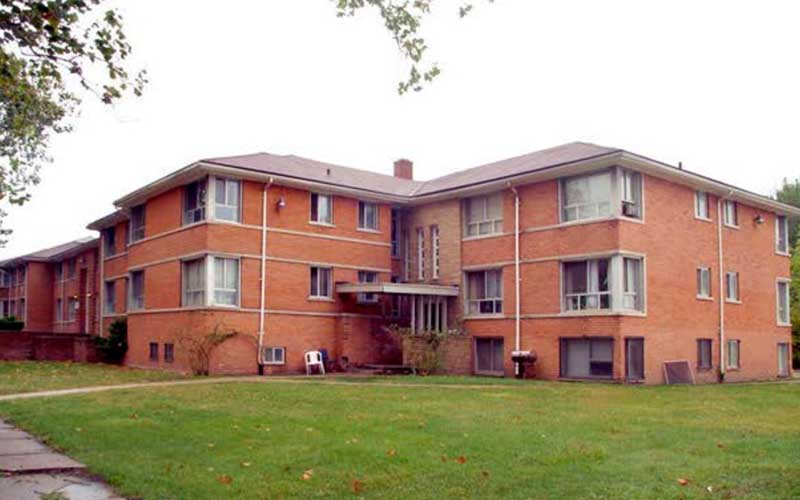 Develop Detroit received diverse funding to preserve affordable housing units that will rent apartments for as low as $150 per month for some residents. (Develop Detroit photo)

Much like older affordable housing, new developments are also tied to restrictions that incentivize developers. Tax credits help developers pay down costs and take out smaller mortgages or pay less cash up front.

Develop Detroit recently received Housing and Urban Development funding to extend affordable rates for 25 years at the West Boston apartments in the Boston-Edison neighborhood. Residents who qualify will pay $150 to $200 per month for updated and some completely remodeled units.

The nonprofit had to seek funding from multiple sources to procure the property and received a loan from Detroit Housing for the Future Fund (DHFF), a private fund with low interest rates in partnership with the City and an affordable housing initiative.

While the continued support for affordable housing in Detroit is a win for single residents, there are still few places for low-income families since most rental units are one-bedroom apartments or studios.

Historically, West Boston is supposed to be a family-centric property, but just nine of the 27 apartments will be two-bedroom units.

Develop Detroit’s recent project in Midtown Detroit will require some units be made available to veterans.

The Sugar-Hill Arts district development at Garfield and John R. streets is a $32 million mixed-use project. There are 84 rental units with space for parking and commercial space on the bottom floor. There are 44 two-bedroom units and all already have prospective tenants. Monthly prices are expected to list from $894 per month to $1,925.

The commercial space is rented to several women of color-owned businesses. Develop Detroit worked with several community partners and a renown artist to ensure pieces of Black history, like Motown’s legacy, were incorporated and celebrated throughout the project. The back alleyway of the building has a greenway that pinpoints local shops and creates a safe walkway for pedestrians, according to Mays.

West Boston and Sugar Hill are seen as successes in affordable housing projects in Detroit. But Mays says she’s still stumped on how to quickly build homes that are sustainable, modern, energy efficient, and low cost for Detroit families.

The diversified funding strategy has been necessary for developers who are building affordable rental housing in Detroit.

“Detroit institutions that have capital still see it as far too risky a place to allocate their money when they could put it in places like New York or Chicago,” Mays said.

Meetings now for housing in the future

Detroit has planned on increasing access to affordable housing for years, but developments are slow to follow.

The City’s Neighborhood Planning Department has drafted Neighborhood Framing Planwork Studies through a series of meetings and focus groups to understand what residents want and need in their neighborhoods. The city’s goal has been to create deep and meaningful relationships with residents as changes are implemented across neighborhoods. The Planning Department divided the city into three areas several years ago, combining two to three council districts at a time.

The meetings have been resident-driven to help the City understand what residents need.

Kevin Schronce, design director for the City, said mixed income developments in Detroit are unique because they’ve been vetted by residents to incorporate community needs. According to Schronce over 20 in-person community meetings were held in Corktown before the City switched to virtual meetings due to the coronavirus pandemic.

Detroit was awarded $50 million in HUD Community Choice Neighborhoods Initiative funding to develop rental housing north of Corktown. More than 500 affordable units are expected to be built, serving households between 30 to 80 percent of Detroit, Livonia, and Warren’s combined Area Median Income (AMI) of $62,800. Some find using the combined AMI unfair, given the metropolitan median income is significantly higher than Detroit’s. The property on Bagley Street, between Rosa Parks Boulevard and Trumbull Avenue is a redevelopment of publicly funded Clement Kern Gardens.

Some of the new affordable units that are coming to Detroit will have “people services” that support community needs and improve overall quality of life, according to Schronce. If projects like the North Corktown development go according to plan Detroiters will see new affordable housing structures toward the end of 2023 with overall improvements to quality of life some time after.

“In five years if this all goes according to plan you’ll see the (benefits),” Schronce said.