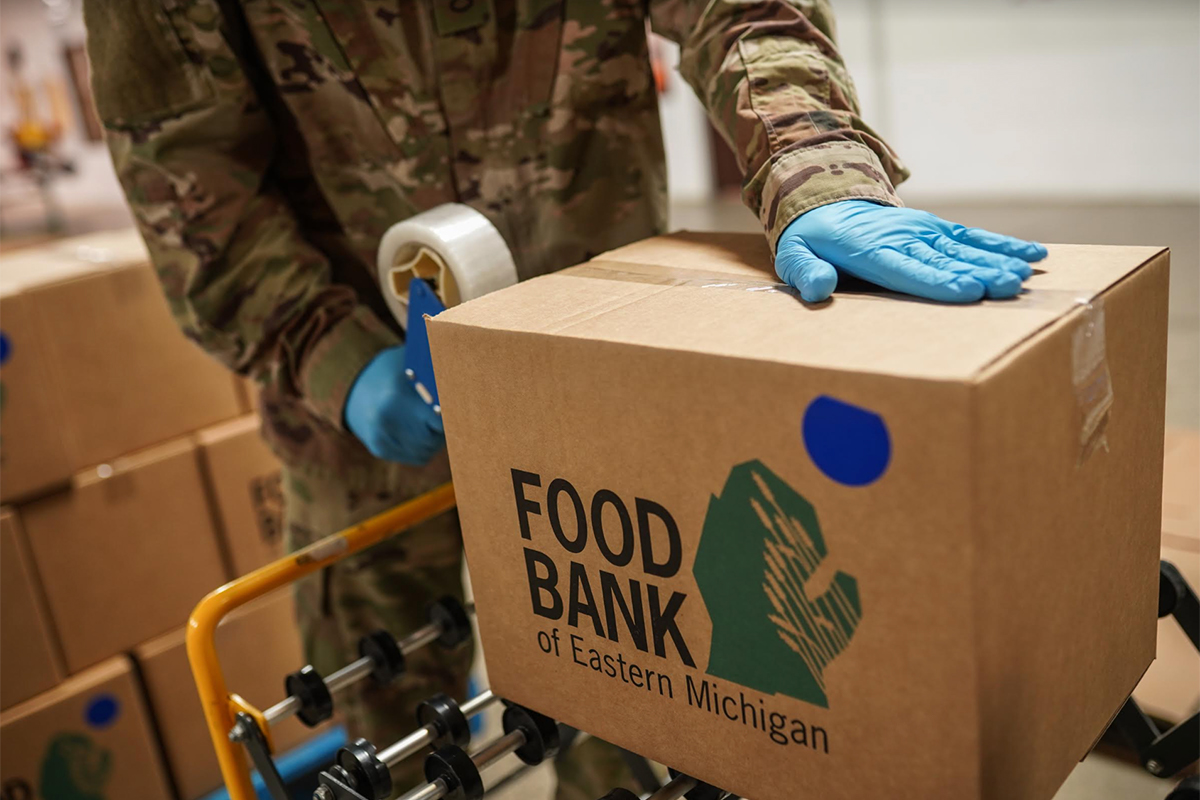 In 2018, childhood food insecurity ranged from 6% to 26% in Michigan depending on the county, a new report shows. (Ryan Garza, Detroit Free Press)

One and a half million households, among the 3.9 million across Michigan, were struggling to make ends meet in 2019.

The average annual cost for an infant in a Michigan child care center accounts for more than half of a minimum wage worker’s income.

The state ranked 28th in the nation when it comes to overall child well-being — an improvement from its ranking of 32nd last year — but the pandemic could halt progress.

These findings are just a few from two wide-ranging reports released Monday, by the Annie E. Casey Foundation and the Michigan League for Public Policy, that provide a snapshot of Michigan childhood and family well-being between the Great Recession and the year before the COVID-19 pandemic. The data points are generally from 2010 to 2019, with some findings from 2020, when the pandemic upended the economy.

“The broad takeaway is that we have made a lot of progress in a number of areas over the last decade and there is still is work to do,” said Kelsey Perdue, Michigan Kids Count project director. “And the well-being of our children and families depends on the decisions of policymakers to make smart choices and investments that prioritize kids and families.”

Areas of progress include: The rate of kids in poverty fell by a quarter from 2010 to 2019. That’s roughly 169,500 fewer children living in poverty. Michigan in 2019 had one of highest rates of health insurance coverage for kids below 18 years old in the country. Teen pregnancies decreased to less than half of what they were 10 years ago.

Still, 1.5 million Michigan households are struggling to afford the basics — housing, childcare, technology, health care, food and transportation. This was before the pandemic.

“Poverty rates today are still higher than they were 20 years ago in 2000,” Perdue said.

Fourteen percent of Michigan children live in high-poverty areas, or U.S. Census blocks where 30% or more of households are at or below the federal poverty line (in 2019 the federal poverty level was $25,750 a year for a family of four). Nearly half of the state’s African American children live in these areas, according to the report. Among the country’s 50 largest cities, Detroit had the highest rate of children living in high poverty areas, at 72%.

Researchers have said that expanded child tax credits could cut child poverty in half and be a stabilizing force for families. Monthly payments are expected to be sent out starting next month to eligible families. The City of Detroit and partners kicked off a campaign last weekcq Thurs June 17 to get more families to file for their taxes and get the benefit.

Families are burdened by costs related to housing and child care. Nearly a quarter of Michigan children are in families that pay 30% or more of their income on housing expenses, according to the report. Research has shown that high housing costs increased food insecurity, difficulty paying bills and skipping needed medical care.

The average annual cost for infant child care is $10,861 (or $905 per month) in Michigan, which accounts for 54% of a minimum wage worker’s income, according to the report, which looked at Jan. 2021 data from the Economic Policy Institute. More parents could enter the labor force if child care were more affordable, the EPI notes.

Gov. Gretchen Whitmer this month announced a $1.4 billion plan to expand affordable child care with federal funds. The plan seeks to increase access to child care for 150,000 more Michigan kids. It would also expand eligibility for subsidized child care from 150% of the federal poverty level — $39,300 for a family of four — to 200% of the poverty level, or $53,000 a year for a family of four, from this August to Sept. 30, 2023.

When it comes to education in Michigan, the national report found the state lagging, coming in at 41 in the country. In 2019, the state had the third-highest rate of fourth grade chronic absenteeism in the nation, an increase of nearly 47% since 2015, according to the statewide report. Between 2017 and 2019, 125,000 young children were not in school.

The pandemic exacerbated food insecurity, but even before that, in 2018, childhood food insecurity in Michigan ranged from about 6% to 26% based on county, with the statewide average being 15%. Michigan’s rural and northern counties had the highest rates of food insecurity, according to the report.

Here are some other takeaways from the report:

“When we consider basic needs and when we consider families’ ability to make ends meet — childcare, housing and health care really bubble up to the top to me as being opportunity areas, and areas where we really can’t let off the gas,” Perdue said.