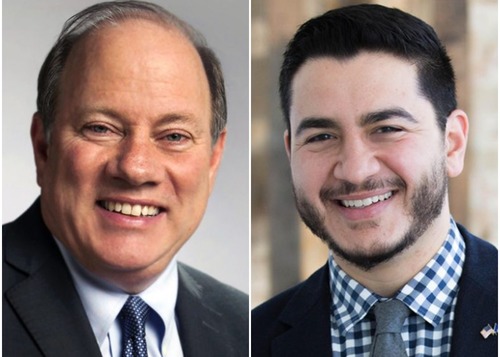 Mayor Mike Duggan is known as a moderate Democrat, but in recent days has made news for a new policy from far to his left: Imposing a moratorium on water shutoffs, while saying that the ban may be permanent.

Duggan announced this step with Dr. Abdul El-Sayed at his side, his former health director and a 2018 gubernatorial candidate, a man whose progressive bona fides are well-known in southeast Michigan. It lent weight to the policy shift, and advocates for the city’s low-income citizens might have hoped that this time, we might really see a solution to the problem of too many Detroiters living without running water in their homes.

We hate to be spoilsports, but we’d advise those advocates to hold their applause for claims by El-Sayed and Duggan to end water shutoffs. We’ve seen this play by Duggan in the past.

Detroit’s difficulty with its water customers is well-known. Bills are high, and for years, the Water and Sewerage Department effectively ignored non-paying customers for long periods, allowing them to run up balances far beyond their ability to pay. That ended during the city’s financial restructuring, when mass shutoffs drew international attention and left many households to flush their toilets with buckets of rainwater, or fill gallon jugs at sympathetic neighbors’ or family members’ houses.

What’s more, new, adjusted, and needless to say higher fees for stormwater drainage have been assessed, for the treatment of rainwater that drains off impervious surfaces into the city’s combined sewers.

And there’s where our suspicion of this new, progressive Duggan begins.

In 2017, when the mayor was running for re-election, these drainage fees threatened the financial stability of hundreds of Detroit churches, many of which have vast areas of impervious surfaces in the form of roofs and parking lots. Threatening Detroit’s churches is a bad look for anyone seeking office. Duggan was quick to negotiate some fees down, and announce a suspension on their collection until the following year.

Once re-elected, though, the fees returned. Today, drainage fees are the primary cause of unaffordable water bills for Detroiters.

In the city, a number of activists have proposed a tried-and-tested solution to the affordability and shutoff problem: Tying bills to the ability of the customer to pay.

Middle-class ratepayers may see such a system as unfair, but it works better for everybody; it keeps customers connected and frees them from the shutoff-and-reconnection dance that can endanger human health. Philadelphia has already implemented this plan, with the idea that offering more manageable bills could lead to even higher collections overall.

This was proposed in Detroit City Council years ago by former Councilwoman JoAnn Watson and recently brought forth by We the People of Detroit and approved as a charter revision by the Detroit City Charter Commission.

The primary obstacle is Mike Duggan.

El-Sayed should ask his new ally what changed his mind about water-billing policy here. After all, a permanent ban on shutoffs for nonpayment would, essentially, make water free for any customer who opted not to pay their bills, and no one believes Duggan would support such a system.

Far more likely is a repeat of the 2017 strategy: Offer relief until the election is held, then quietly reverse course.

“Using a moratorium on water shutoffs as a political bargaining chip in the midst of the Covid-19 pandemic is unconscionable and morally reprehensible,” says Rev. Roslyn Bouier of the Brightmoor Connection food pantry.

And those who have worked on the issue doubt this deal will result in a water affordability plan that is sustainable and meets the needs of Detroiters.

If Detroiters have learned anything in the recent past it’s that we cannot count on politicians to save us. We must organize, build power and put forth our own solutions.

No wonder the Duggan/El-Sayed proposal has been met with widespread skepticism. El-Sayed claims his decision to endorse Duggan was to end water shutoffs permanently. That his endorsement was supported by what he deemed “real grassroots” activists is a distraction often used by non-residents seeking to take leadership in our community. We understand the value of building allies to advance our policies. However, we draw the line when it results in undermining our voice, co-opting our leadership and splintering our relationships within our community.