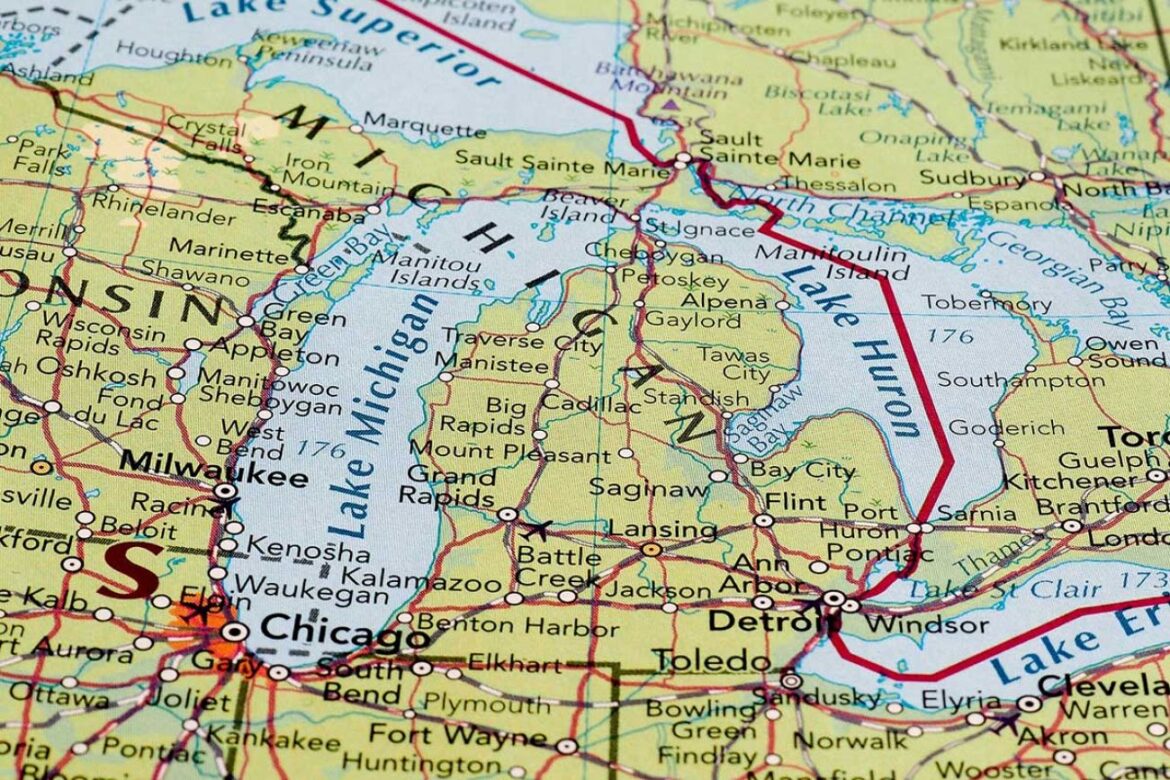 Michigan's redistricting chair Brittni Kellom, bottom left corner, has missed 42 percent of the commission's meetings since elected to a six-month term. Her attendance record has raised concerns among members of the public. (Claudio Divizia / Shutterstock.com)

The biggest recent offender is the commission chair, Brittni Kellom, a Democrat from Detroit. She has missed 14 of 33 (42 percent) of the commission meetings since being elected chair March 18, according to minutes and other records analyzed by Bridge Michigan.

Overall, Kellom has missed 17 meetings of 60 since the commission started its work Sept. 17.

As the Michigan redistricting commission draws new state legislative and congressional maps, some have raised concern about members missing sessions. Here’s a breakdown of who has missed redistricting meetings from September 2020 to Aug. 24:

The commissioner with the second worst attendance is Juanita Curry, also a Democrat, who has missed nine of 60 meetings since September.

In the last three meetings, three members of the 13-member commission have been absent, raising concerns within the panel that it was close to lacking a quorum for the meetings.

Just on Monday, Rhonda Lange, a Republican, joined the panel via Zoom but was hesitant to support a motion to extend the length of the meeting.

“I’m not feeling good today and I’m here today just to make sure we have a quorum,” Lange said.

The spate of missed sessions prompted a reminder from the organization whose efforts led to the commission’s creation through a statewide vote in 2018. Nancy Wang, executive director of Voters Not Politicians, noted in a statement to Bridge Michigan that the commission’s work will have an impact on voting rights and political boundaries for the next decade.

“The public needs every commissioner to show up and actively participate in every aspect of the redistricting process,” Wang said.

The state’s redistricting commission has 13 members: four Democrats, four Republicans and five independents. According to rules adopted by the panel, a quorum consists of nine commissioners, and must include at least one member from each of the three groups.

In a statement, Kellom told Bridge on Tuesday she has been open with the commission “regarding any unexpected personal and family health challenges and work conflicts, especially against the necessarily evolving MICRC schedule.

“Like other Michigan residents, and the only commissioner who works full-time, I do my best to juggle all my responsibilities effectively, efficiently, and ethically,” said Kellom, founder and executive director of Just Speak, an advocacy group that focuses on childhood trauma. “Nevertheless, I remain committed and resolute in raising my voice to ensure fair maps through public engagement.”

It’s unclear how Kellom is providing input if she’s not participating in the meetings.

Edward Woods, the commission’s communications director, told reporters last week Kellom was doing her “homework” as commissioner, and that she was listening to the meetings and public comment, despite not being in attendance.

“She’s a part of the team … She’s been present and engaged just like all 13 have been,” Woods said. “Despite their schedules and their absences,  they’re part of the process.”

Curry, the commission member with nine missed meetings, told Bridge in a statement that “as a single senior, I battle health challenges with my back and knees that require frequent medical attention,” adding that she has to drive herself to the doctor.

The Michigan Independent Citizens Redistricting Commission was created by voters in 2018 to assume responsibility for drawing state and federal political maps; a duty previously in the hands of whichever political party was in power. When redistrictricting was under Republican control in recent decades, Michigan produced some of the most gerrymandered districts in the nation.

Since its formation, the commission has faced some significant setbacks because of pandemic-related delays in the U.S. Census Bureau’s latest population counts. It has said it will likely miss its Sept. 17 constitutional deadline to have initial political maps ready for public review. It’s now hurrying to draw boundaries after the Census released population numbers two weeks ago.

According to the panel’s timeline, commissioners are supposed to draw the drafts of 110 state house districts, 38 state senate districts and 13 congressional districts by Sept. 30.

It’s time-consuming work. During its map drawing meeting last week, the commission took about 5 hours to draw one senate district.

Kellom’s absence has caused some concerns. During Tuesday’s commission meeting, Wayne County resident Callie Burley said she worried the commission’s schedule was the reason some commissioners — in particular Kellom — were missing sessions.

“Being a fellow Wayne County resident, I see her as, you know, the best representation for me on the commission,” Burley said. “I’m sure she has her reasons why she can’t attend and I don’t need to know them.

“If there’s a reason that one commissioner consistently cannot make meetings, the commission should be having a more variety in meeting scheduled time so that everyone has the opportunity to attend.”

But under commission rules, members are allowed to participate in the meetings virtually if they can’t attend any of the multiple meetings commissioners have every week.

The commission went full-on virtual throughout the pandemic, but it went back to in-person on May 11 as COVID cases eased, when it started touring the state to gather input from the public.

Even then, commission members have been free to participate remotely as they choose. Commissioners Lange and Erin Wagner, both Republicans, have made liberal use of the remote option.

Of the 25 commission meetings since May 20, Wagner, of Charlotte, and Lange, of Reed City, attended 18 remotely

Wagner has missed seven meetings out of 60, and Lange six.

According to the commission’s rules, commissioners are expected to “perform his or her duties in a manner that is impartial and reinforces public confidence in the integrity of the redistricting process.”

But there’s no requirement for how many meetings a commissioner must attend in order to be considered performing their duties.

Earlier this year, Commissioner Anthony Eid, an independent, tried to implement an attendance requirement, but was not successful.

He told commissioners in January he thought it was needed if in the future a commissioner wanted to “simply to collect a check and then never (show) up to the meetings at all.”

“While it’s not a likely scenario, I could foresee it happening,” Eid said then.

On Tuesday, Eid responded to a reporter on Twitter who noted that Kellom was absent and that some members of the public had expressed concerns.

In a since deleted tweet, Eid said that when the commission made its rules of procedures, “I tried to add an attendance requirement but it was voted down.” 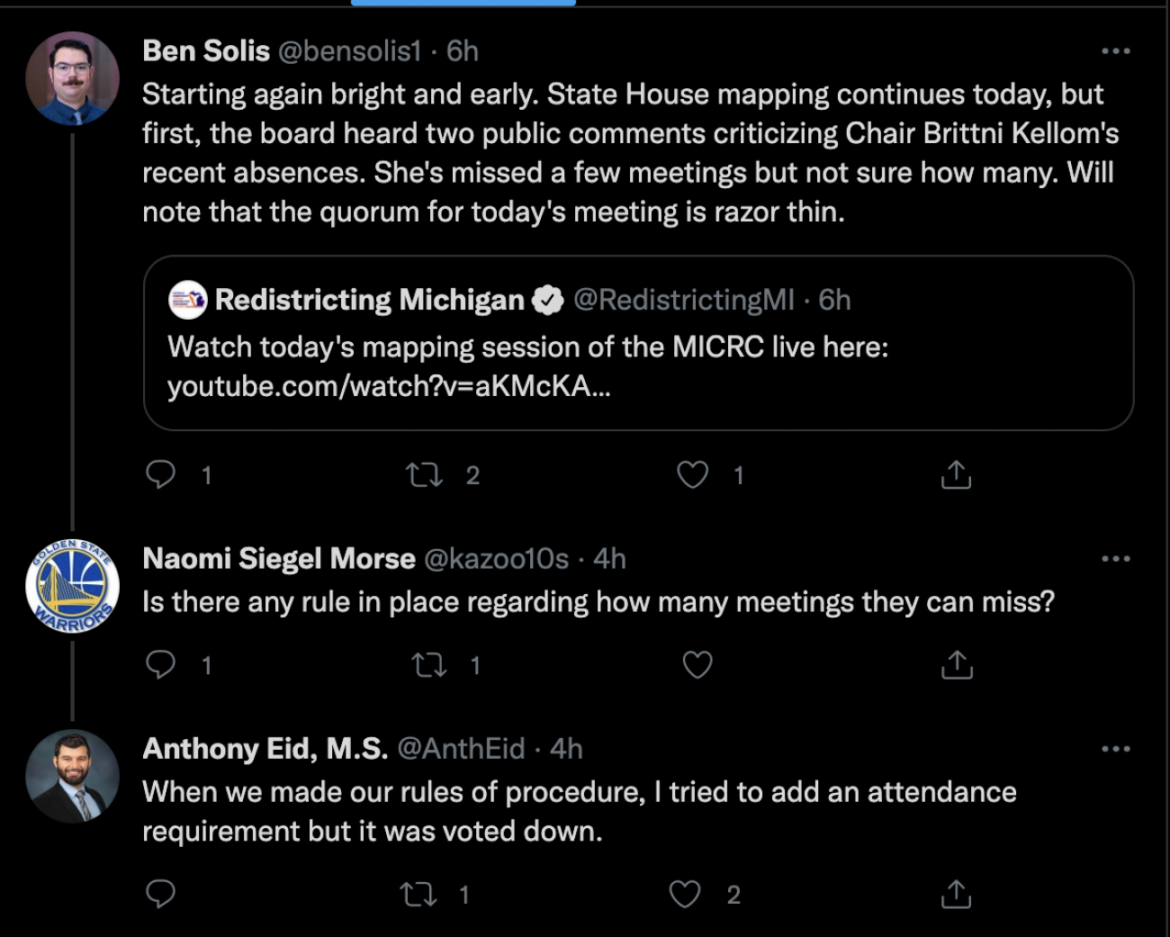 In a now deleted tweet, Commissioner Anthony Eid told a reporter Tuesday he had tried to push the commission to implement an attendance requirement, but that it was rejected by his colleagues. (Screenshot)

Eid declined a request for an interview, but in a statement said his tweet “gave the impression that I was critical of Commissioner Brittni Kellom’s attendance. On the contrary, Commissioner Kellom shared openly and transparently the personal reasons for her absences.”

“In proposing an attendance policy in January, I desired to ensure that the Commission benefitted from hearing the diverse voices of each commissioner.”