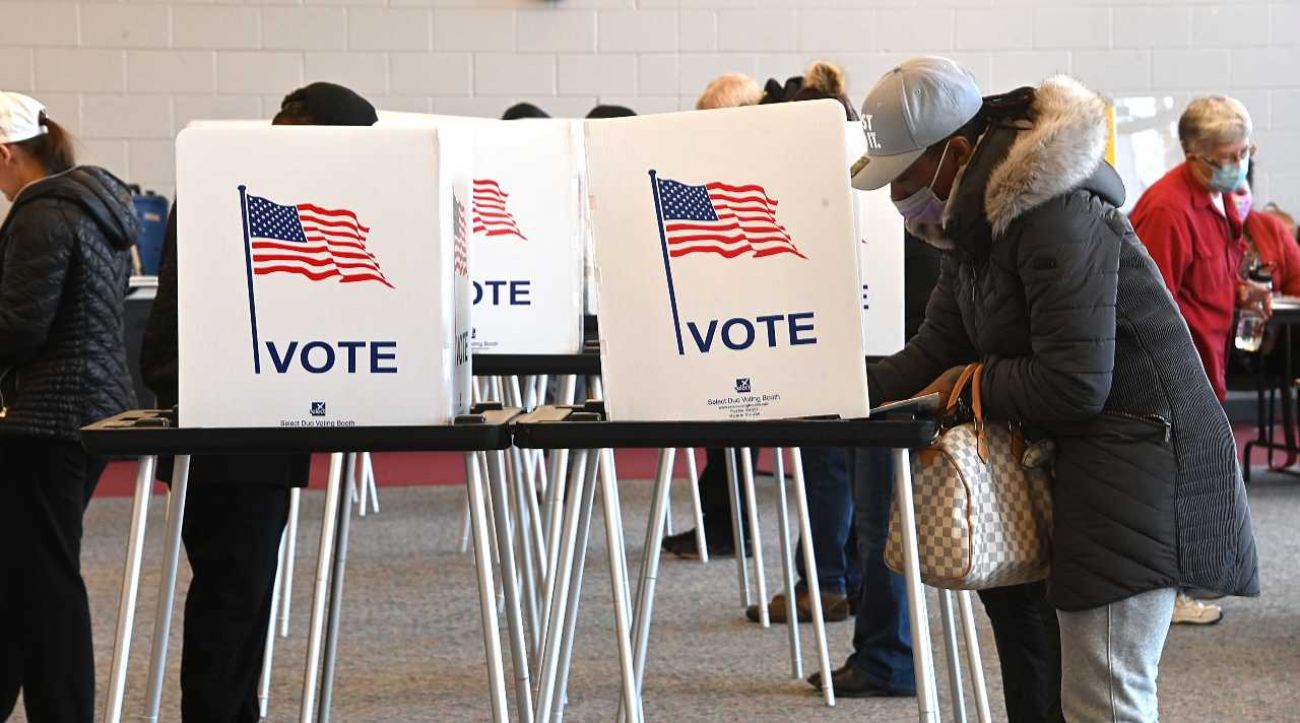 The Michigan Supreme Court has upheld Michigan’s voter ID law because it allows those without identification to sign an affidavit. Bills moving forward in the Legislature would eliminate that option. (Bridge file photo)

LANSING — Fourteen years after Michigan’s voter identification law survived a legal battle because of an affidavit option Republicans are now moving to eliminate, critics are threatening litigation again as the legislation moves to the full Senate for a potential vote.

Because Michiganders without an ID can currently vote by signing an affidavit, existing law does not amount to a “poll tax,” the Michigan Supreme Court ruled in 2007, rejecting claims the statute disenfranchises low-income and minority voters who may struggle to obtain ID.

But that would change under a trio of bills advanced Wednesday by the Republican-led Senate Elections Committee in a series of 3-1 party-line votes. The proposal would end the affidavit option for in-person voters and also create new voter ID rules for absentee ballots.

Sponsoring lawmakers say their bills would close “loopholes” that criminals could exploit for voter fraud purposes.

Democratic Gov. Gretchen Whitmer has promised to veto any bills that make voting harder, including the ID proposals. But the Michigan Republican Party is planning to bypass Whitmer with a petition drive.

If that happens, the law would invite legal challenges, said Mark Brewer, an attorney and former chair of the Michigan Democratic Party who represented a ballot committee that advocated for Proposal 3, which enshrined a host of voting rights in the state constitution in 2018.

“A photo ID requirement is unconstitutional for a variety of reasons,” he told Bridge Michigan. “I think (the GOP bills) have got really severe problems, and those problems are compounded by Proposal 3, which has very clear rights to vote an absentee ballot without any preconditions.”

But state ID is already required to do many things in Michigan, like buying beer or getting a fishing license, and voting should be no different, Senate Elections Committee Chair Ruth Johnson, R-Holly, told reporters after Wednesday’s panel vote.

“Ensuring the integrity of our elections is critical to a healthy democracy and requiring voters to verify their identity with ID is the best way to protect the ‘one person, one vote’ standard,” Johnson added in a statement.

Critics contend the bill is a solution in search of a problem that could impose a large burden on a small number of voters, especially low-income and minority voters. Researchers estimate racial minorities in Michigan are about five times more likely to lack access to ID than white voters.

“Voters have had the option to use an affidavit, or use their signature to get a ballot for decades, and it has always worked and it has been secure, and people have been able to have confidence that their vote has been counted,” Edevbie told Bridge Michigan.

“To change that is just really uncalled for and wrong.”

Senate Majority Leader Mike Shirkey, R-Clarklake, has said he wants to eliminate barriers to obtaining an ID in Michigan. Senate Republicans will introduce additional legislation to do so “in the next couple weeks,” spokesperson Abby Walls said Wednesday.

Supporters note that polls indicate a majority of voters favor strict ID laws, and some statutes in other states have survived legal challenges.

But the Michigan bills “run contrary to the text and spirit of the Michigan and federal constitutions, as well as the federal Voting Rights Act,” Merissa Kovach of the ACLU told lawmakers last week.

“If their legislators choose racist voter suppression techniques rather than full enfranchisement, we will vindicate voters’ rights in court,” she said.

Michigan first adopted a voter ID law in 1996, but the statute went unenforced for more than a decade after then-Attorney General Frank Kelley said the government had no “compelling interest” to restrict ballot access because there was no evidence of substantial voter fraud.

“For the poor, those who do not drive, especially the elderly, the handicapped and those who, for whatever reason, do not possess a picture identification card, this requirement imposes economic and logistical burdens,” Kelly wrote in an official legal opinion.

The Michigan Supreme Court overruled Kelley in 2007. The conservative majority dismissed claims the law amounted to a “poll tax” because voters without an ID could sign an affidavit instead, affirming their identity under penalty of perjury but without cost.

Michigan ID cards cost $10, but the state waives those fees for low-income voters who qualify for government assistance programs. But there are other costs associated with obtaining an ID, including transportation to a Secretary of State Office, taking time off work and documentation needed to qualify for an ID, such as a birth certificate copy.

Writing for the majority in 2007, then-Justice Bob Young acknowledged those cost concerns but said the state had an interest in preventing voter fraud.

“Nothing in the statute contemplates that a voter is required to incur any costs in the execution of an affidavit,” he wrote.

Under the new GOP proposal, in-person voters without a photo ID would be allowed to cast a “provisional ballot.”

But that ballot would not count unless the voter returned to their local clerk’s office within six days and presented ID and proof of residence, such as a utility bill.

“That is far different than signing an affidavit,” said Chris Thomas, a former state elections director who told Bridge he thinks the new GOP proposal “will be found unconstitutional by the Michigan Supreme Court” if enacted into law.

The legislation would make voting a “two-step process” for registered voters who forget their ID on Election Day or do not have one, said Thomas.

He called the measure an “abuse of provisional balloting, which is designed for people who are registered to vote” but do not appear on a precinct voter list.

“I think it’s just a way to tamp down the vote,” he said.

But Johnson, a Republican former Secretary of State, said it is important to update voter ID laws because of the 2018 ballot initiative that expanded absentee voting in Michigan.

It is now possible for a first-time voter to register and cast a ballot without ever being seen by a “real person,” Johnson said.

“It has left some loopholes in the system and it’s very, very important to get it fixed.”

Roughly 11,400 Michiganders submitted an affidavit to vote without ID last year, which is about 0.2 percent of the 5.5 million voters who participated in the presidential election. There is no evidence that anyone successfully impersonated a voter to cast an in-person ballot.

As Bridge Michigan has reported, roughly 1 in 4 voters who used the affidavit option in 2020 were located in Detroit, but the practice was not limited to large cities or Democratic strongholds. Voters in 82 out of 83 Michigan counties signed affidavits, often because they forgot to bring their ID to the polls, according to local clerks.

The affidavit option was more popular in 2016, when 18,580 in-person voters cast ballots without an ID, about 0.5 percent.

There is “strong empirical evidence” they were used most by low-income and minority voters, according to a recent analysis by Daniel Smith, who chairs the department of political science at the University of Florida.

Researchers from the University of Michigan, University of Pennsylvania and Harvard came to a similar conclusion in a March 2020 report: “While the rate at which voters of all races lack access to ID is low, minorities are substantially more likely to do so,” they wrote.

Ten other states currently have “strict” voter ID laws similar to the proposal advancing in the Michigan Senate, according to the National Conference of State Legislatures.

The U.S. Supreme Court in 2005 upheld an Indiana law that only allows voters without ID to cast a provisional ballot on Election Day, ruling it did not “represent a significant increase over the usual burdens of voting.”

However, justices noted a unique provision that is not part of the Michigan proposal: Provisional ballots in Indiana can eventually be counted if, within six days after the election, a voter returns to their local election board and signs an affidavit saying they cannot afford ID.

State and federal courts have more recently struck down or suspended similar election laws in North Carolina, Missouri and Texas, where lawmakers in 2017 were forced to weaken what had been the strictest voter ID law in the nation.

In Michigan, Democratic nominees now hold a 4-3 advantage on the state Supreme Court, unlike 14 years ago when a conservative majority upheld the state’s voter ID law.

It’s those justices who may decide the fate of stricter voting rules if Republicans manage to enact them by petition drive, a rare maneuver allowed under the Michigan Constitution that lets the Legislature avoid a gubernatorial veto by collecting about 340,000 voter signatures.

“You expect the justices to play it straight, and I think they would all listen to our arguments,” said Brewer, the Democratic attorney.