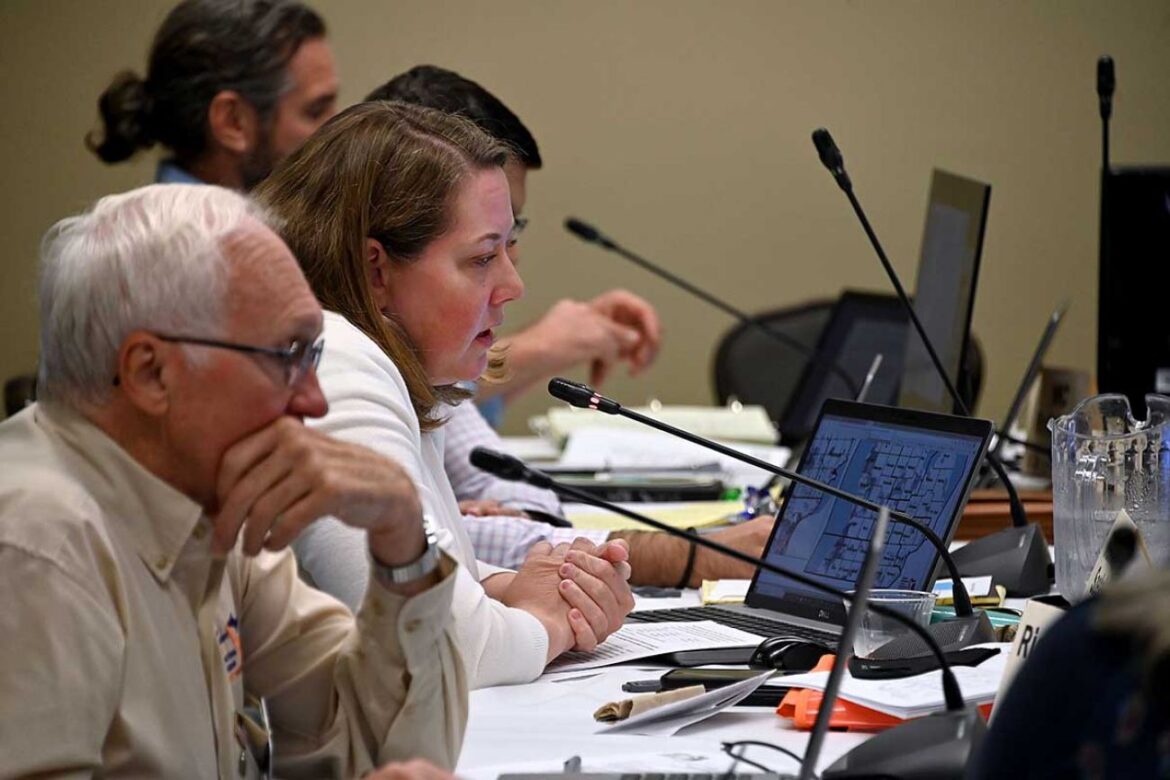 Rebecca Szetela, an independent who serves as chair of Michigan’s redistricting commission, works on some maps at a September meeting in East Lansing. (Bridge photo by Dale Young)

LANSING — Michigan’s redistricting panel agreed on Monday on four congressional maps that will be brought to the second round of public hearings scheduled to start next week.

Bridge Michigan analyzed the drafts and concluded that, combined with the loss of one seat in Congress because of stagnant population, Michigan’s congressional districts likely will become far more competitive regardless of which map is adopted.

Republicans and Democrats now have a 7-7 split, but most current districts are safe seats for both parties, resulting in few competitive races. The new drafts have several districts in which 8,000 or fewer votes separated Democrats and Republicans out of about 775,000 voters.

And perhaps most notably to voters: Few incumbents are safe, as at least eight representatives are now placed in districts with at least one other member.

And one draft district centered in Macomb County would have no incumbent whatsoever.

Representatives don’t have to live in districts they represent, but the disregard for incumbency — which had been a hallmark of gerrymandered maps — shows how radically redistricting has changed in Michigan.

Voters approved the 13-member Michigan Independent Redistricting Commission in 2018 after decades in which the party in power in Lansing redrew districts largely in private after the decennial census.

That resulted in districts that a federal judge panel concluded made it easier for Republicans to maintain power, even in years they received fewer votes total than Democrats in Michigan.

The maps approved Monday are the result of two months of drawing, balancing both “communities of interests” — like-minded groups of individuals including minorities — with partisan fairness and federal law.

Detroit, for instance, would keep two congressional districts, even though its population has dropped to 637,000.

While Michigan now has two districts with a majority of Black voters, that would drop to one with all maps, and be centered in Detroit. Other drafts preserve another district composed of a majority of minority voters, including Hispanics and other races.

The commission has decided to rename the maps using native Michigan trees for the sake of clarity. Bridge Michigan will refer to them as such.

Bridge Michigan analyzed the maps, and here’s what we found:

This map keeps Kalamazoo and Battle Creek in two different districts, but lumps Midland in a district with Saginaw, Bay City and Flint.

According to the commission’s partisan fairness analysis, which uses a composite score of the last 13 elections in the state, this map would split the delegation 7-6 Democratic.

Congressional map (‘Birch’) proposed by Rebecca Szeleta (I) on Oct. 8

This map would give Democrats a 7-6 edge based on the 2020 presidential results, but three of the districts are incredibly close.

However, Bridge Michigan’s analysis of the 2020 election results give Republicans a majority with seven seats.

However, three districts could be considered a toss-up, with one close GOP win, and two close Democratic wins.

Depending on the metric you use, this map could give either party a razor-thin majority in the congressional delegation.

This proposal is the only one that has a district that stretches from Grand Rapids, all the way south to Kalamazoo and Schoolcraft, creating a solidly Democratic district.

Congressional map (‘Apple’) proposed by Dustin Witjes (I) on Oct. 5

This map breaks down 7-6 Democrat based on the 2020 presidential results. It creates a solid Democratic district connecting parts of Grand Rapids and Kalamazoo.

This map covers a significant portion of the state’s west coast.

It keeps Grand Rapids and Kalamazoo in different districts. Instead, it puts Ottawa County in the same district as the city of Kalamazoo, and the city of New Buffalo in the Indiana border.

This map breaks down 8-5 GOP based on the 2020 Presidential results, but four districts are toss-ups, separated by less than 8,000 votes for Democrats and Republicans.

This map was worked together by the commission, but tweaked by Commissioner Anthony Eid, an independent.

Congressional map (‘Juniper’) proposed by Anthony Eid (I) on Oct. 7

This map breaks down 7-6 GOP based on the 2020 presidential results but with four districts where the margin is less than 8,000 votes.

This map would put Lansing in a more compact district, sharing a representative with Clinton, Eaton, Livingston Counties, and parts of Ionia and Owosso counties.

According to the commission’s partisan fairness analysis, Democrats would hold a majority with seven seats.

One thought on “Michigan congressional redistricting drafts are done. Few incumbents are safe”