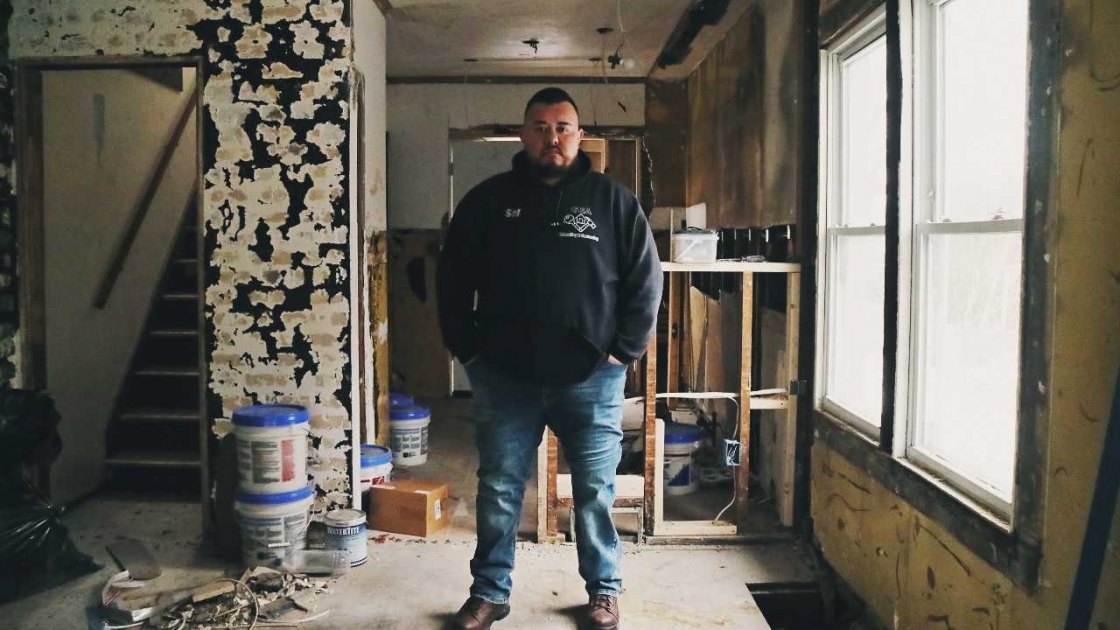 Selicio Alvarado, owner of S&R Consulting and Contracting, is now lead-abatement certified. He will be contracted by the City of Detroit as part of a $9.7 million grant from HUD to remove lead paint from homes in the 48209 ZIP code—something he says would not have happened without the support of the Michigan Hispanic Contractors Association. (Bridge photo by Cybelle Codish)

Bridget Barnes Espinosa set up pan dulce coffee hours, visited taquerias and passed out 8,000 flyers, all toward a single goal: to increase construction opportunities for Hispanic contractors in southwest Detroit.

Major projects worth billions, such as the redevelopment of Michigan Central Station and construction of the Gordie Howe International Bridge, along with related I-75 work, are taking place in the neighborhood that has the largest Latino community in Michigan.

Yet studies showed that few of the skilled workers who live in and around Mexicantown are employed on those projects or have other wider industry connections.

Since 2019, at least 140 contractors in the area have responded to Espinosa’s efforts to build the Michigan Hispanic Contractors Association (MI-HCA). The group connects independent contractors and small construction companies with jobs, creating  economic development in southwest Detroit, where the per capita income is $17,747, compared to the Michigan average of $57,144.

“I went to church because that’s where the construction workers are on Sunday,” Espinosa said. “Sometimes the priests would allow us to make announcements.

“I sat at Mexicantown Bakery every Monday for over a year meeting workers.” 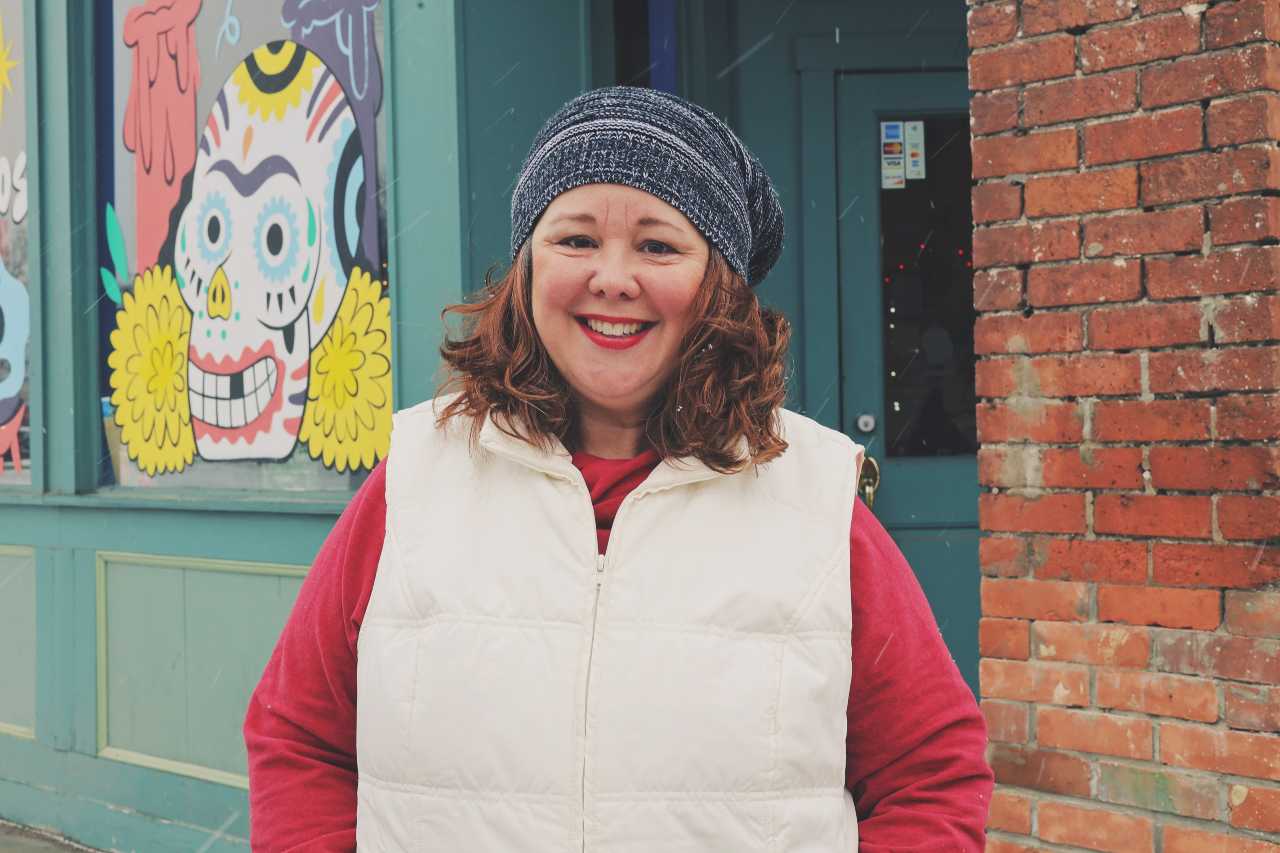 Bridget Barnes Espinosa stands outside of Mexicantown Bakery in southwest Detroit, where she met with construction workers every Monday for a year to help them fill out paperwork and join the Michigan Hispanic Contractors Association. (Bridge photo by Cybelle Codish)

Recruiting is how Espinosa met Juan Pedro Martinez, who once thought he’d follow his father and grandfather and become a butcher in San Ignacio, a small town in Mexico’s highlands. Instead, he is now a successful carpenter who says he once bought the most broken-down dilapidated house he could find just to prove he could remodel it from the ground up.

His services in high demand, he has work lined up through the end of March. Next,  Martinez wants to work on bigger, more significant projects.

For years the Southwest Detroit Business Association (SDBA) had been analyzing construction projects in southwest Detroit, where the population is roughly 116,000.  Yet SDBA found a surprising lack of inclusion of the Latino construction professionals living in the very community where these projects were being built. Minority contractors, for example, make up only 5 percent of the I-75 gateway project.

Complexities around bidding requirements and lack of capital are among the reasons, a state official said.

“Contractors need to have that working capital in order to do our projects,” said Tony Kratofil, chief operating officer and chief engineer for the Michigan Department of Transportation. “They have to pay for materials and pay their labor costs up front, and then they get reimbursed later.”

So with seed money from the Michigan Hispanic Chamber of Commerce and the backing of SDBA, business consultant Espinosa was hired to build an organization that would give construction workers the resources and opportunities to grow their business.

“Smaller businesses don’t get seen, they don’t get recognized, and that doesn’t enlarge the wealth generation, or the income distribution,” said Bruce Pietrykowski, research scientist at the Institute for Research on Labor, Employment and the Economy at the University of Michigan. “Once people start making money and spending money in the community, that’s the real benefit.”

In addition to billions of dollars in infrastructure projects, southeast Michigan also is experiencing a residential construction and renovation boom. COVID-19 has kept millions of Americans at home, turning basements into offices and bedrooms into classrooms.

The Home Builders Association of Southeast Michigan said the demand outpaces the trade base. Yet many contractors like Martinez want to be part of the boom, but they don’t know how. One of the issues is the absence of bilingual outreach efforts on behalf of construction companies.

“Businesses want to reduce their search costs when searching for contractors,” Pietrykowski said. “So they go with who they’ve always gone with, which oftentimes shuts out people from the communities.” 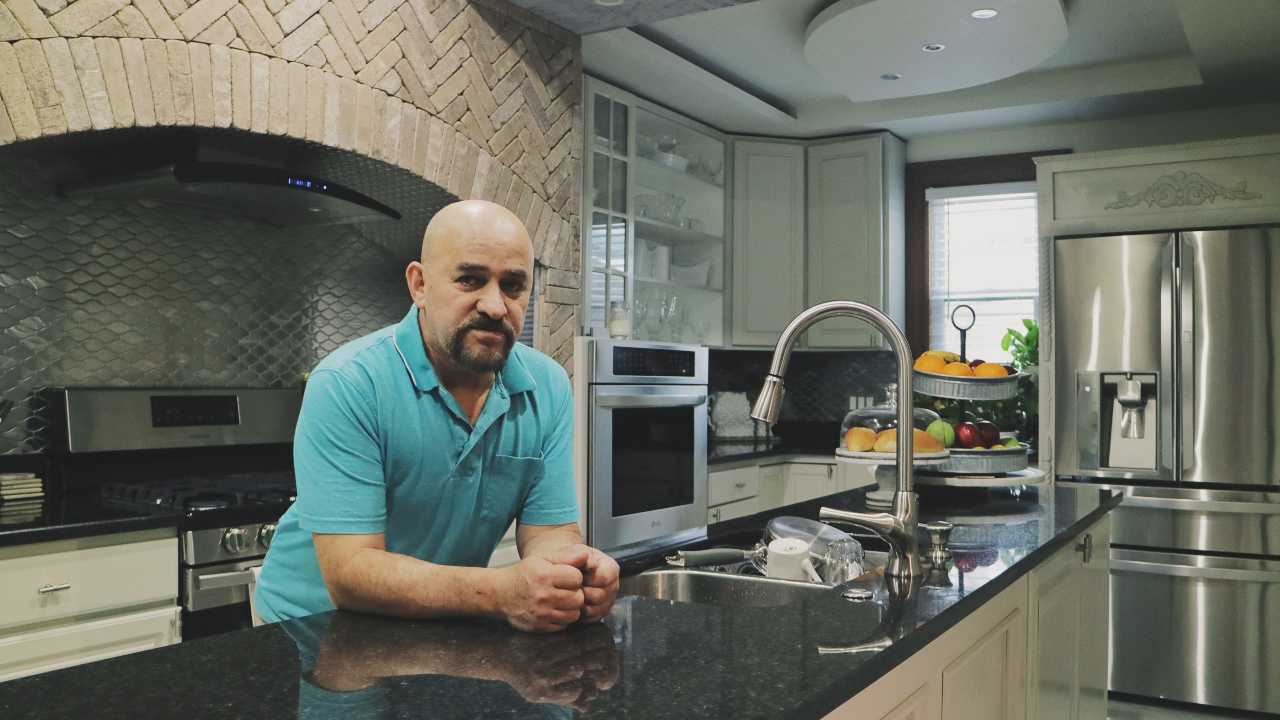 Juan Pedro Martinez stands in a kitchen he designed and constructed. Martinez was the first member of the Michigan Hispanic Contractors Association. (Bridge photo by Cybelle Codish)

After months of administrative work, Espinosa and her team put together a comprehensive grassroots strategy to recruit members from every corner of the community.

“If you want to be truly inclusive, you have to meet people where they are,” Espinosa said.

One of the issues confronting the tradesmen was a lack of legal know-how to take the next step, or understanding how to fill out paperwork, she said.

Doing basic accounting, choosing a business structure and getting an employer identification number (EIN) are all things MI-HCA helps members do.

The group’s first meeting was held at the Ideal Group. Fifty-five people showed up, including Martinez. He was the first of 140 entrepreneurs who’ve gone on to become members of MI-HCA.

“Having a collective group or an association is an important way of raising the visibility of Latino contractors,” said Pietrykowski. “It also gets past the argument companies use like, we don’t know where these people are, we can’t find them.”

Selicio Alvarado, a general contractor and president of SRA Consulting and Contracting, is third-generation Mexican-American who has been in the construction and remodeling business since he was 17. He showed up to his first MI-HCA meeting at Mi Pueblo Restaurant wearing busted up work boots and his hard hat. He says he was overwhelmed by the resources – something that had never existed for him before.

“The beautiful thing about the networking meetings is that they’re in the neighborhood, and it’s inclusive,” said Alvarado. “I mean, every type of company that plays a role in real estate development, whether it’s commercial or residential development, was there.”

He met other electricians, roofers, concrete workers, landscapers – everything and everyone he needed to build his business.

“There are so many of us in the neighborhood that have these skills that are exceptional,”  Alvarado said. “We definitely are an asset to our neighborhood, to our community and to surrounding communities.”

In 2019, the city of Detroit received $9.7 million from the U.S. Department of Housing and Urban Development to remove lead in the 48209 ZIP code — smack in the middle of southwest Detroit.  As soon as it was announced, Espinosa and Roberto Torres, director of the city’s Office of Immigrant Affairs and Economic Inclusion, connected to see how they could work together.

The interest was there. Latino construction workers were eager to have a city contract, but many didn’t speak enough English to take the lead abatement classes and pass certification.

So Torres and MI-HCA created a second class for Latino contractors who primarily spoke Spanish.

“Southwest Detroit is made up of Spanish-speaking families, and we realized that there was a great need to have Spanish-speaking contractors from the community,” Torres said. “There has to be a relationship between the individual family that’s awarded the grant and the contractor.”

Both Martinez and Alvarado took the lead abatement classes and passed. Martinez is now one of seven lead abatement supervisors. Alvarado and his entire crew have gone through the training but haven’t been able to start because of the pandemic.

In the spring, the SDBA will break ground on  La Joya Gardens, a $19 million mixed-use development with 53 residential units and 7,600 square feet of commercial space. Alvarado is determined to be part of it.

“A few years ago, I would have had a very negative opinion about a new construction project,” Alvarado said. “I would have thought, ‘Here come these large construction companies that are non-Hispanic owned, and make money in our neighborhood. They’re going to build these things and we don’t get to be a part of it.’ ”

But not anymore, since joining MI-HCA and receiving mentorship, and support, Alvarado feels more confident and driven to bid on the big developments like the Gordie Howe Bridge and Michigan Central Station when they are in the finishing stages of the project.

“This isn’t a Walmart. This isn’t a gas station,” Alvarado said. “These are monumental developments and historical buildings. If I get the job, this is the thing I get to drive by and tell my grandkids. I built that. I worked on that. I had a hand in it, my DNA is in that building.”