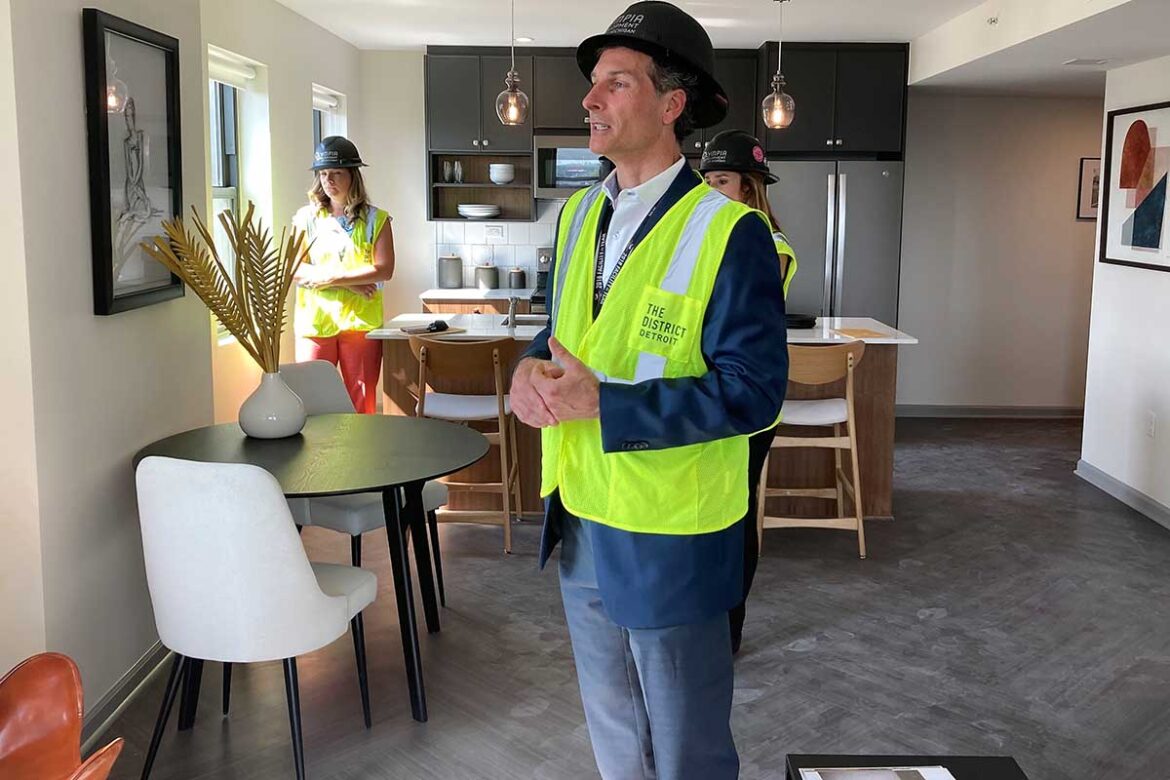 For the first time since the Ilitch organization moved its Little Caesars headquarters to the Fox Theatre more than 30 years ago, the family-run empire is on the verge of restoring and occupying a historic building in Detroit.

The Eddystone, a 13-story structure a few yards from Little Caesars Arena is set to reopen as upscale apartments with ground-floor retail by late November, according to the Ilitch’s Olympia Development of Michigan. 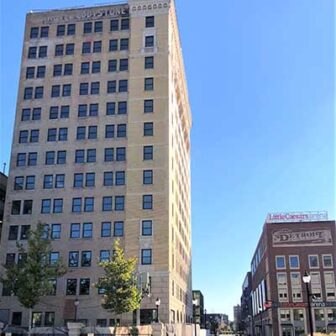 Last decade, the Ilitch group vowed “five new neighborhoods” would be created by the time the LCA opened in 2017. The Ilitches call the plan The District Detroit. Filling the area with new offices, stores and residences was the linchpin in the billionaire group’s argument of why it needed $324 million in taxpayer money to help build the massive arena.

The long-delayed promises show just how much the plan depends on the Ilitch organization.

That’s because Ilitch-linked companies own or control at least 60% of the properties in the 50-block District Detroit, according to property records. The properties add up to any area larger than the city’s Central Business District, which is the downtown area between the freeways and the Detroit River.

Much of District Detroit is in the Cass Corridor, one of the poorest, most desolate sections of the city. But now it is surrounded by prosperous neighbors – Midtown, downtown, Brush Park, Woodbridge and North Corktown — where housing prices are often far higher than the rest of the city. 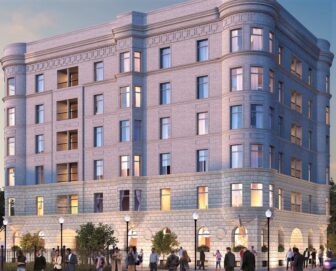 A rendering that Olympia Development released years ago that depicted a restored Alhambra. It had plans for 163 apartments and ground floor retail.

The group has rarely, if ever, sold a property once it gains control. In some cases, the family has held onto vacant property for decades.

The Eddystone would be the first historic Detroit building that the Ilitch group will have restored and occupied with tenants since The Fox Theatre and Hockeytown Cafe. Some improvements of the Fox were already underway when the Ilitch family bought the property in 1987. The group took over and began an extensive renovation that returned the theater to its original glory and upgraded the office tower.

Marian Ilitch, the matriarch of the family, owns the MotorCity Casino & Hotel. That’s in a renovated historic Wonder Bread factory, but it was a previous casino owner who initially performed that work. However, the Ilitch group has invested $300 million in the facility, including adding a 400-room hotel, a conference center and a 1,800-seat theater, according to company officials.

The Eddystone is amid the eight-block area the Ilitches have transformed with entertainment and sports venues, its new corporate headquarters, the recently built Wayne State University Mike Ilitch School of Business and another new office building next to the arena. 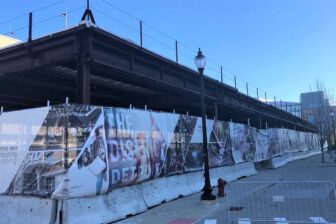 The site of the once-proposed Arena Lofts is a partially built structure. (BridgeDetroit photo by Louis Aguilar)

The Ilitch group has invested $1.4 billion in the District. The group has also reaped hundreds of millions in taxpayer subsidies, grants, loans and other benefits. That includes the razing of more than a dozen structures, and helping accumulate land for the arena.

Loss of housing and residents

At this point, the Ilitches have created an island of big-ticket attractions that’s surrounded by blocks of parking and plenty of empty land owned by the group.

Recently released 2020 Census data show a big part of the area encompassing District Detroit has lost population and housing since the opening of Little Caesars Arena. The information is based on census tract data, which drills down on a small geographic area. 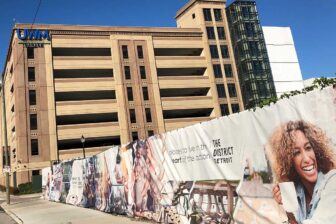 The site of the proposed One 11 West remains an empty space. (BridgeDetroit photo by Louis Aguilar)

There’s a census tract whose borders are Woodward Avenue to the east, the Fisher Freeway to the south, the Lodge Freeway to the west and Martin Luther King Jr. Boulevard  to the north. The tract, officially called Detroit Census Tract 5225, includes more than 35 of the 50 blocks in District Detroit.

Another way to show the stagnation in District Detroit is to compare the housing prices in the surrounding neighborhoods. Across the street from LCA on Woodward Avenue is the western border of Brush Park. At least seven historic homes there have sold for more than $1 million in recent years, according to MoveInMichigan.com, a real estate site. Downtown condominiums can fetch over $1 million. The cheapest nearby housing is in North Corktown, where homes can range from the mid-$100,000s to over $350,000. 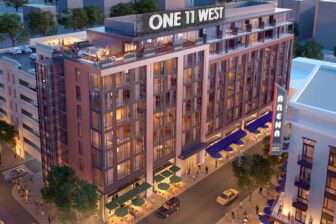 An original plan for One 11 West at 111 Henry, a new building with 80 upscale apartments and ground-floor retail. (Olympia Development rendering)

In the District, there’s a dilapidated house in the shadow of the arena that’s asking $3.9 million and has been on the market for a few years now. There are no other residential properties listed for sale, nor is there any record of any recent sale.

And yet, the Eddystone could be a sign of steady developments coming online. One key reason is that two years ago, the Ilitch group hired a permanent, large-scale real estate team to oversee its plans. The staff of 40 is the first time the organization has had an in-house development unit since the company moved to the city more than 30 years ago. Before that, it relied on outside consultants. The team oversees the firm’s overall development strategy, including reaching out to local residents and organizations, handling construction projects and managing properties. 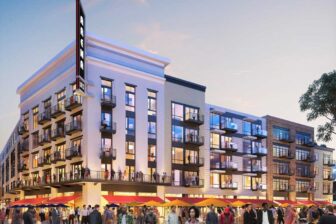 The proposed Arena Lofts at 120 Henry. The original goal was to have 153 residential units. (Olympia Development of Michigan rendering)

The Eddystone is one of three major residential developments planned in historic buildings controlled by Olympia. Another project would restore seven buildings on the Cass Avenue and Henry Street block. The other is the revival of the former United Artists building on Grand Circus Park. Plans to redevelop two other historic properties in the Ilitches’ portfolio — the Alhambra and Hotel Fort Wayne — were announced in 2017, but have not seen any discernible progress. 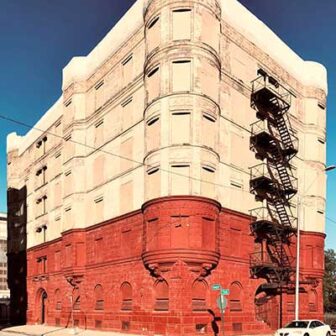 The former Alhambra at Park and Temple is among the vacant buildings that the Ilitch group promised several years ago to restore with housing and ground floor retail. (BridgeDetroit photo by Louis Aguilar)

“This is not a five-year development, flip it, and you go do something else.  We’ve got a very, very different horizon than most people do, and, that is, we are in this for the long term,” Bradford said.

The development took time during the pandemic to look at the overall master plan, he said

“We still believe there is an optimal mix,” of residential, retail and office in the District.

Soon, the group plans to do more public outreach to the community to share some of its potential plans.