This photo essay was inspired by a recent recording of my podcast, Authentically Detroit. As my co-host Donna Givens and I were interviewing our guest, he said that while he lived in Detroit (2014-2016), he sometimes felt, and even later reminded himself, that he was a guest in our city. He didn’t have the privilege of being able to claim neighborhoods or high schools like some longtime Detroiters, he said. At that moment, I began thinking about my journey through Detroit Public Schools from 1993 to 2007 and the beautiful neighborhoods that surrounded the district’s buildings. I remember the excitement in seeing the trees sprout and flowers bloom as our days grew longer in great anticipation of summer break. This essay is the recollection of a black boy who enjoyed stunning buildings and academia in a city that embodies resilience. These neighborhoods and schools are currently the homes to our future journalists, politicians and artists. While we ponder and consider our city’s appetite for a strengthened education system, don’t forget to think on how our DPS experience makes us Authentically Detroit. BridgeDetroit invites you to tell us your DPS story through photo essays, videos and words! Email us at info@bridgedetroit.com to submit your story for publication. Looking forward to hearing from you! 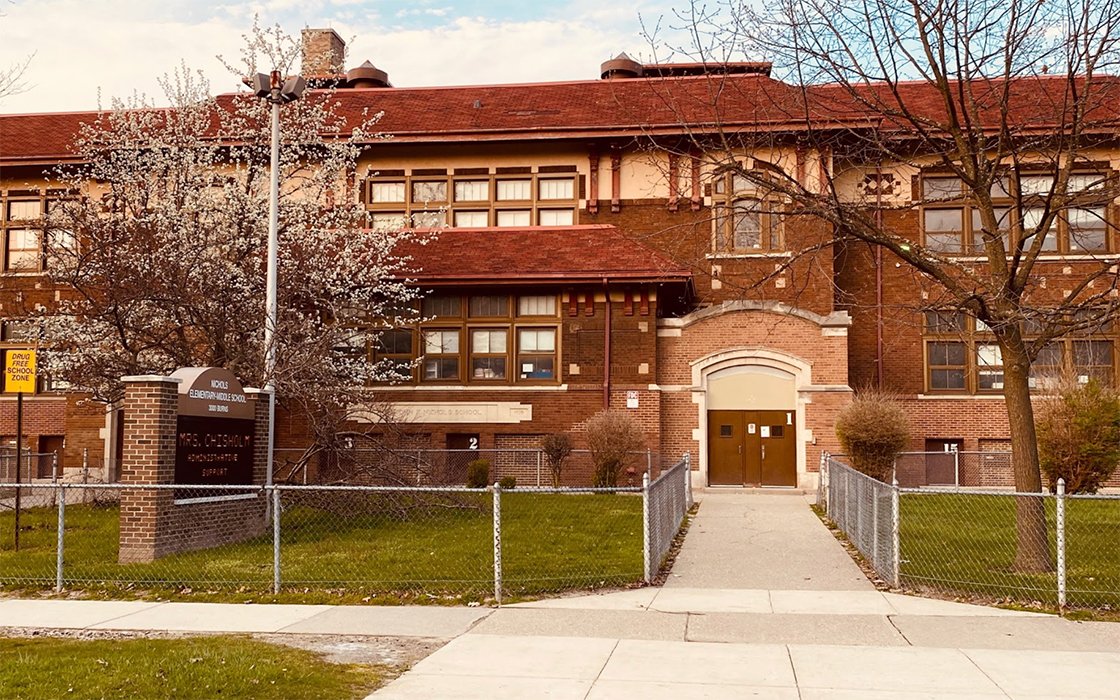 I loved going to Nichols, my very first Detroit Public School, because it was located in the Indian Village neighborhood. We’d often ride down the blocks and marvel at the stately, old beautiful homes that to my amazement were technically located on the city’s “east side.” The small part of the east side I had known was my grandmom’s block that had only a few houses with many vacant lots. Granny owned the lots next to her home and used them to create a gathering space for the family. We had many picnics and birthday parties and played epic games of tag on those lots. My time in kindergarten at Nichols was unfortunately cut short. As the story goes, school staff placed me on the wrong bus home after dismissal on day and I was lost for a few hours, much to the dismay of my parents. My mother pulled me out of Nichols. 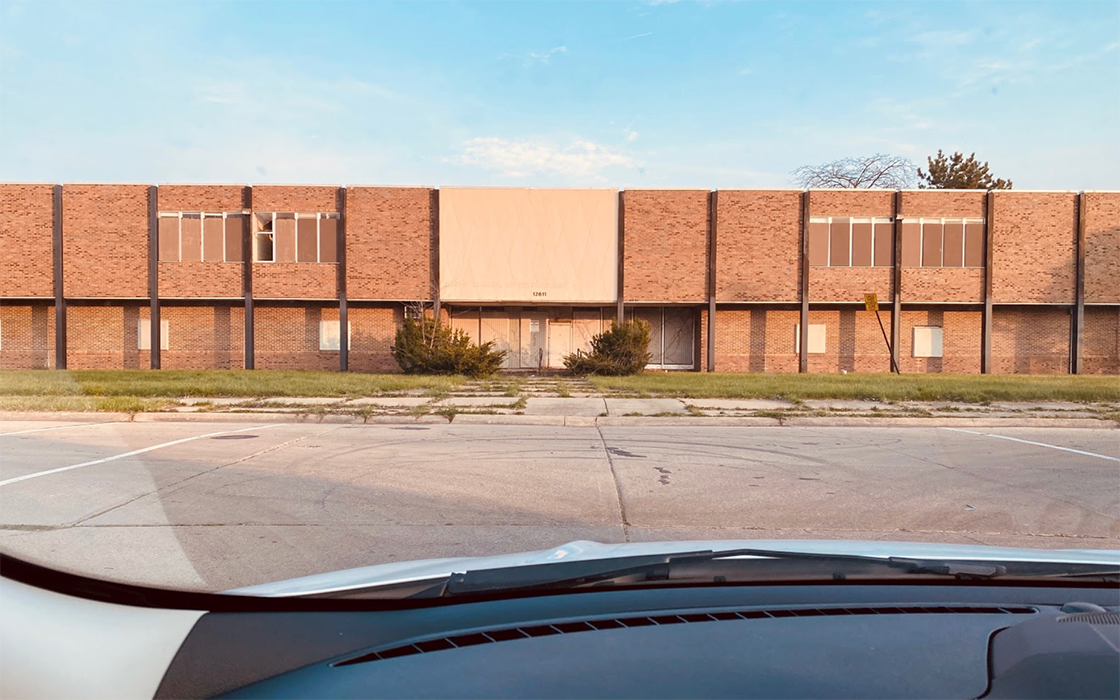 Stark School of Technology, at 12611 Avondale St. in the Jefferson-Chalmers neighborhood, afforded views of the Detroit River. It closed in 2012. (Photo: Orlando P. Bailey)

Stark was special to me and my family. My mother and I shared the same kindergarten teacher, Ms. Dear. Most of my cousins, aunts and uncles attended Stark because it was our neighborhood school. When my great-grandparents migrated to Detroit from Mississippi, they settled in the Jefferson-Chalmers neighborhood. Their home is still in our family generations later. I went to Stark up through the first grade, leaving at the start of the second-grade year after my family moved farther east. What I remember most about Stark was that during recess we had a view of the Detroit River. I also had my first “wannabe bully” there, but my older cousin Tiger put an end to that real quick. Stark closed in 2012, leaving the building vacant. There is so much to be said about the trauma a neighborhood experiences when one of its institutions is closed down and the remnants are left to rot. 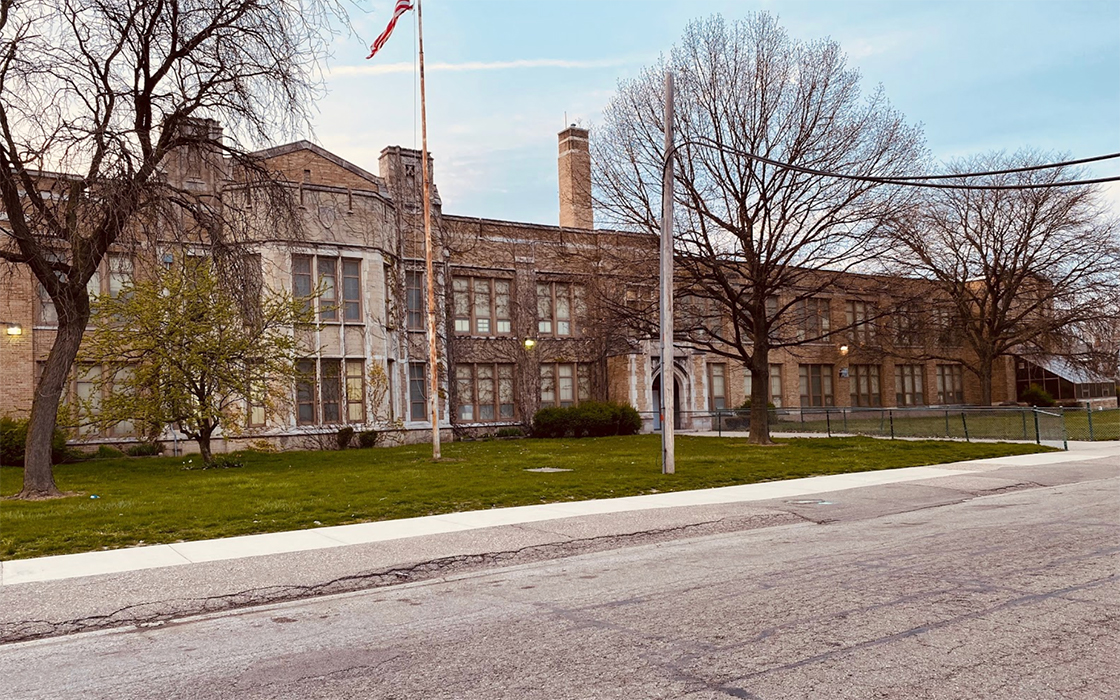 My time at Clark was disastrous. I arrived there in the middle of second grade and was traumatized. The move forced me to try to make new friends, at a new school, in a new neighborhood. I missed my friends at Stark and I missed our old neighborhood. I remember adamantly opposing Clark to my parents. Clark was the place where my lifelong fear of bees, specifically  yellow jackets, began. One day at recess while playing “catch,” I missed the ball and went to retrieve it from under a bush. I emerged with bees all over my head, face and shoulders. I was stung numerous times and scarred for life! I begged my parents to let me go to another school and they eventually obliged. 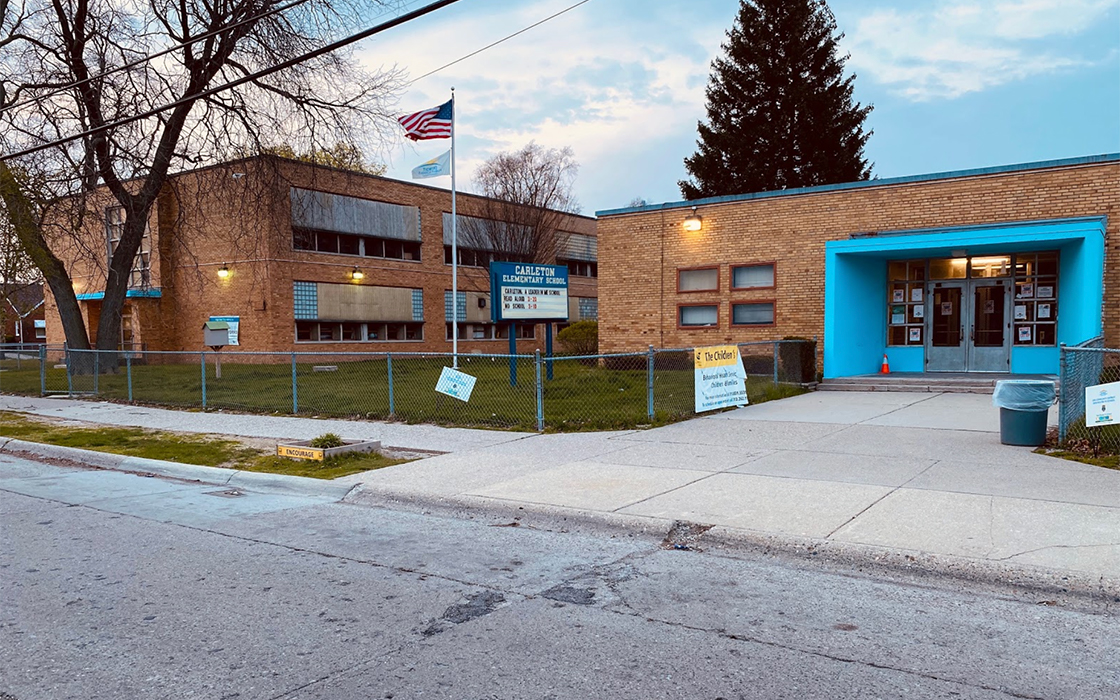 After the run-in with bees, I transferred to Carleton Elementary to finish second grade. I thrived at Carleton. I loved my teachers and my new friends. I was in the Future Teacher Club, Glee Club and the Service Squad. I had my first girlfriend there, too. Ms. Majchrzak and Ms. Yancey were two amazing teachers who helped shape my lifelong affinity for books. It was also at Carleton where I met my best friend to this day, Henry Richardson. I was sad to leave after I finished fourth grade (Carleton was a K-4 school). 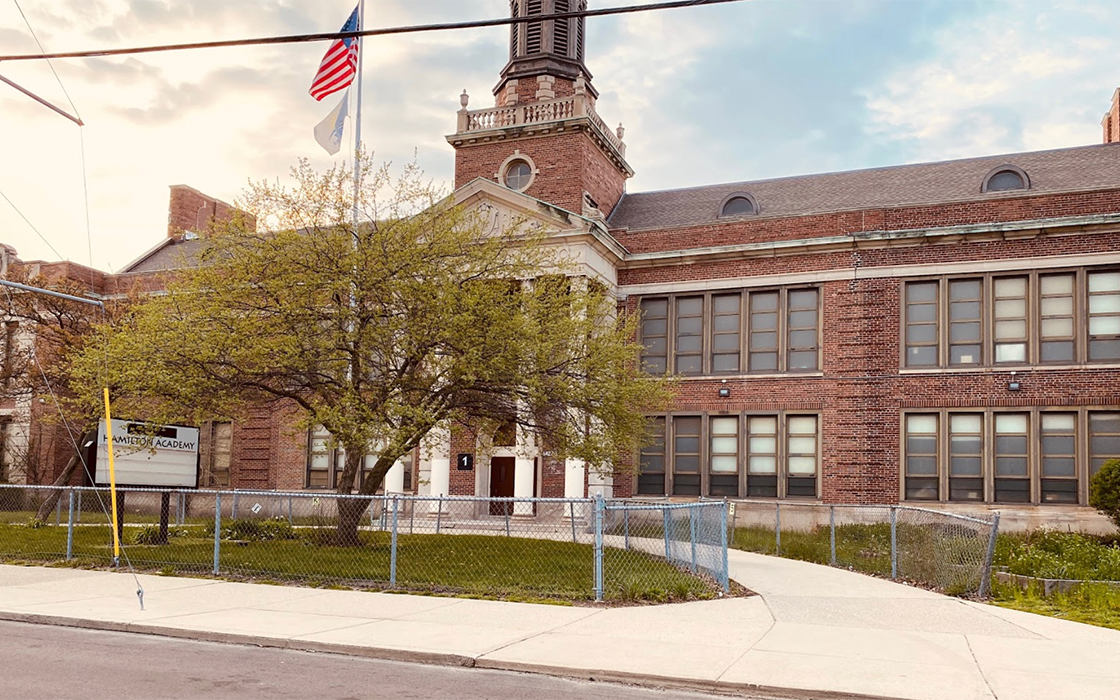 Hamilton Elementary, a K-5 school, is at 14223 Southampton in Detroit’s Chandler Park neighborhood. It was here that I had my first Black male teacher. (Photo: Orlando P. Bailey)

I was bused to Hamilton, a K-5 school, for fifth grade. I only spent a year there, but what an action-packed year it was. I got into my first fight — in Ms Reed’s science class — over a pencil. Dwayne would not give me back my pencil! It was at Hamilton that I had my first Black male teacher, Mr. Eason, for homeroom and math. Mr. Eason was a super cool teacher but also was a U.S. military veteran. At that time, I didn’t know how monumental and rare it would be for me to sit in a classroom with a Black male teacher. I cherish that memory, now more than ever. 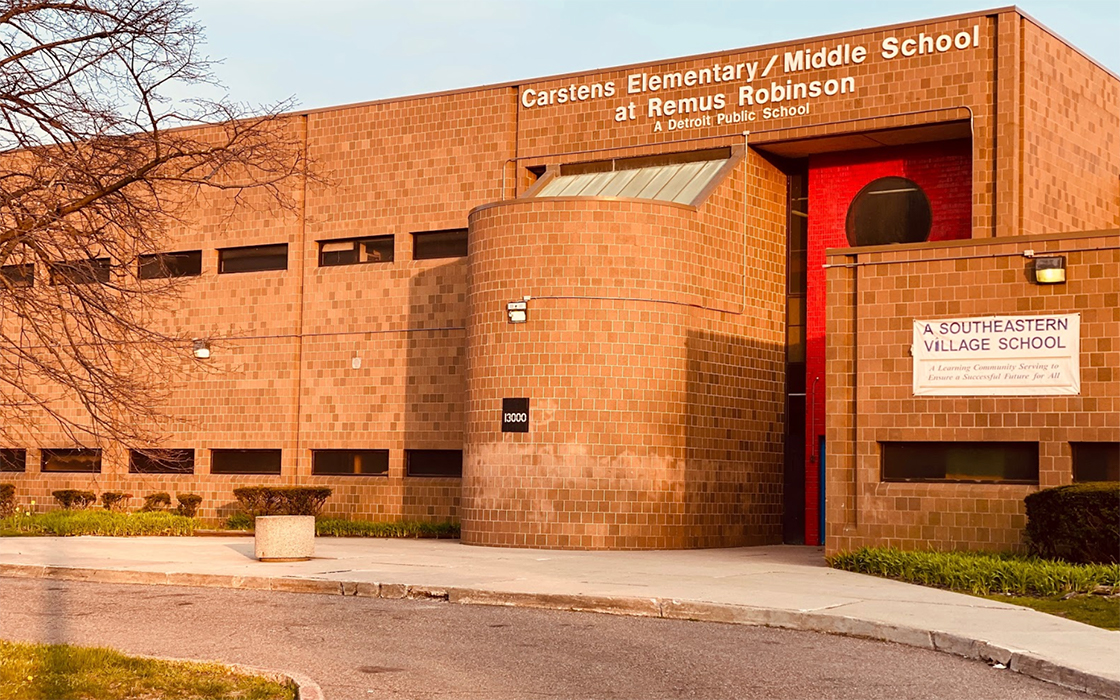 Remus took me back to the neighborhood where my family’s Detroit story originated. My times at Remus, in Jefferson-Chalmers, were some of the best of my young life. At Remus, I made lifelong friends. My best friend, Henry, and I participated in all of the extracurricular and after-school activities together. Henry was a whiz kid without ever having to try, while I was the one who had to study to be half as good. We both connected with the Warren/Conner Development Coalition (WCDC) youth program, a program that I had no idea would be the launching pad for my career in community development in Detroit. 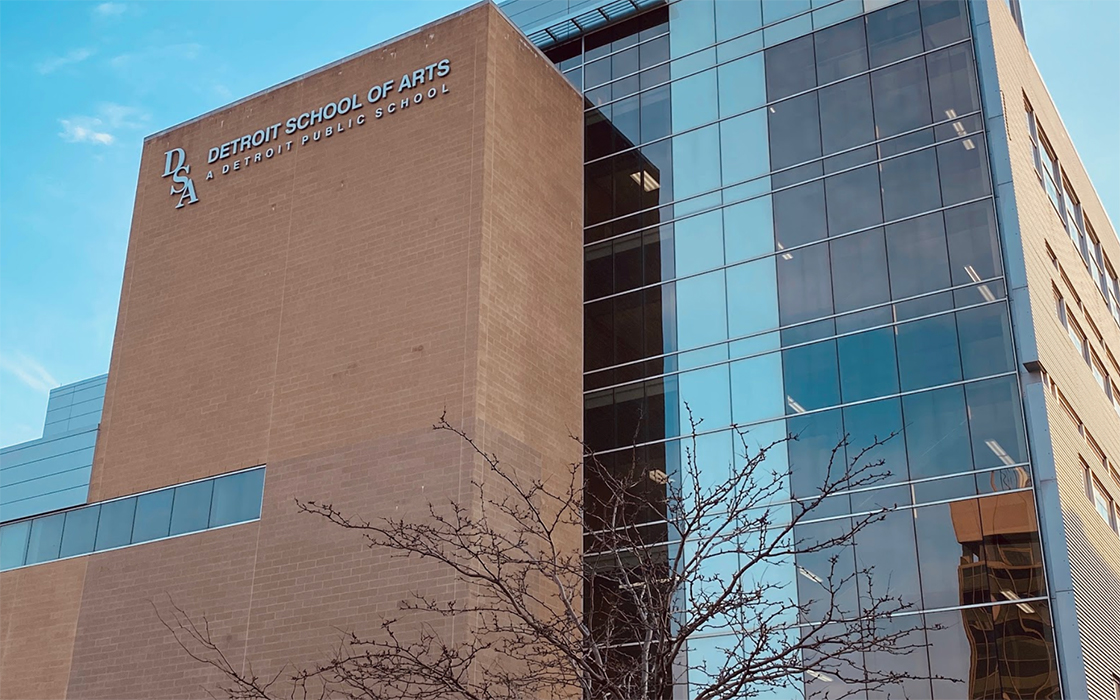 Detroit School of Arts, formally the Detroit High School for the Fine and the Performing Arts, was originally inside of the old Wilbur Wright building at 4333 Rosa Parks Blvd. The newly built location is at 123 Selden in Detroit’s Midtown. (Photo: Orlando P. Bailey)

Detroit School of Arts, or DSA, was a place that celebrated differences. Walking through the halls, I would see dancers practicing pirouettes, students singing at the top of their lungs, and actors talking to walls, all to the sound of improvisational jazz on a saxophone from a young musical prodigy, while Sheefy McFly was sketching something great. DSA embodied unstifled joy. It was Detroit’s “Fame,” a place that gave us room to explore our proclivities and as a Blue Ribbon School of Excellence, it challenged us academically. As our principal, Dr. Denise Davis-Cotton always told us that, “our first performance begins in the classroom,” and not the stage that we were all itching to stand on.. I was trained in classical and contemporary theater, as well as radio and television broadcasting by Marsha Sakwa. It wasn’t unusual to hear me on the public address system in the morning giving the school’s announcements. DSA gave me a deep appreciation for the fine and performing arts, and helped me to crystalize my “third eye.” I met my forever friends there, and cemented relationships that still add so much value to my life.