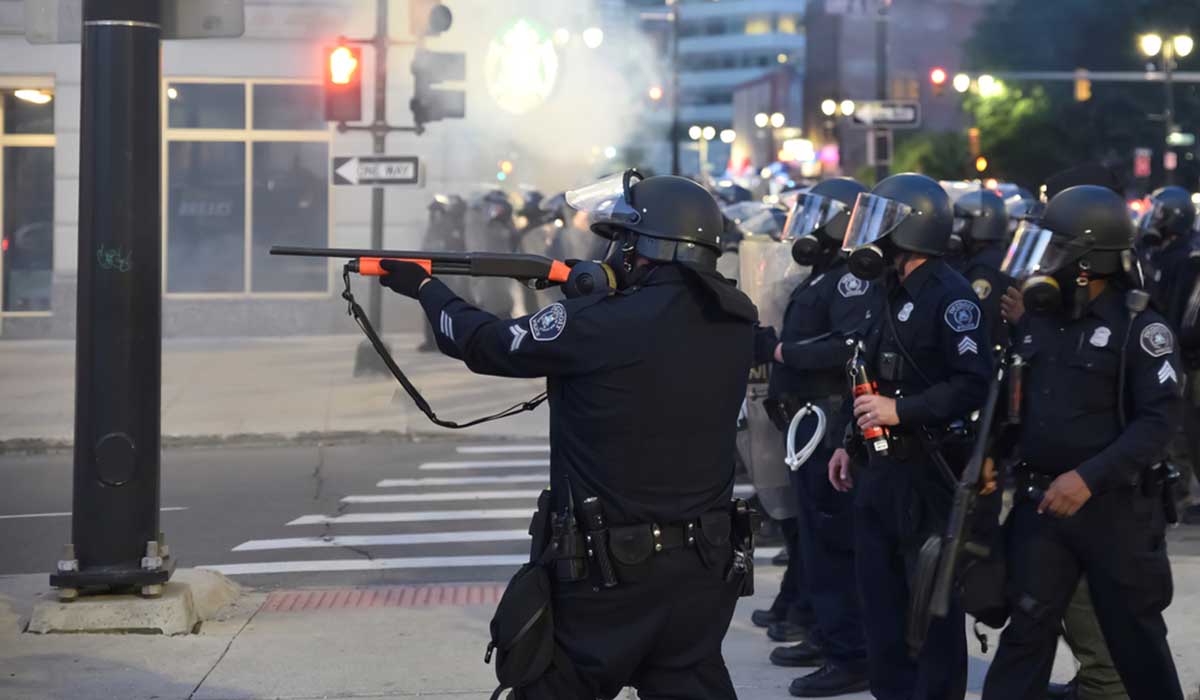 A Detroit police officer with a non-lethal gun fires at protesters May 31. (Shutterstock photo)

Born in the wake of George Floyd’s killing at the hands of Minneapolis police earlier this year, Detroit Will Breathe —  a group of social justice advocates that has been on the streets every day since May — filed a lawsuit Monday against the City of Detroit, Mayor Mike Duggan, and Police Chief James Craig. The suit alleges Detroit Police officers have used excessive force against protesters. It also names individual police officers Stephen Anouti, Timothy Barr, David Hornshaw and Mariah Erard.

Amanda Ghannam of Schulz Law PLC, one of the attorneys in the group’s lawsuit, believes her clients have a good chance of winning this case.

The city’s attorney, Lawrence Garcia, responded to the announcement of the lawsuit saying he was “pleased to hear it” because it gives the city the opportunity to countersue.

“After 13 weeks of protest and demonstration, what has been recently happening in the streets of Detroit is not about raising awareness around legitimate racial justice concerns,” Garcia said. “Wearing a bulletproof vest to a protest shows a certain desire and intent. What is going on nowadays is more about provocation and public nuisance than bringing power to the people.”

It is unclear who exactly Garcia is referring to with the remark about wearing a bulletproof vest, but Ghannam says she is curious to see what counterclaims the city plans to bring.

“It seems like this is further retaliation against our clients for exercising their first amendment rights and conveying their message, but we’ll see if and when they get filed if that’s the case,” she said. Ghannam points to cities like Seattle and Portland that have had protesters take legal action against police and city officials over excessive force. She says there haven’t been any countersuits to arise from those lawsuits.

“I have not seen counterclaims in any of these other cities,” she said. “What we’ve seen is claims by protesters, similar to ours, seeking injunctive relief, seeking a stop to excessively forceful police tactics, and those have been successful.”

Since Detroit Will Breathe — or DWB — formed in May and began calling for the DPD to be defunded, Craig has previously referred to some protesters with the organization as a group of “outside agitators” who aren’t from the city.

The co-founders and two most prominent figures of DWB, Nakia Wallace and Tristan Taylor, reject the claim that anyone involved in their group incited violence. They also say protesters aren’t outsiders, as they are both from Detroit.

Wallace even points out what she considers the irony of Craig’s outside agitators claim by saying most police officers in DPD don’t live in the city. Last month, Crain’s Detroit reported that 77 percent of DPD’s 2,485 officers live outside of the city.

Wallace and Taylor recently spoke to BridgeDetroit about the ongoing, and seemingly escalated, tension between Craig and the protesters. Craig responded to the lawsuit in a brief statement saying, “this is another example of how [Detroit Will Breathe] perpetuated a false narrative.” The department didn’t elaborate on which claims in the suit it believes to be false, but the two sides — protesters and city officials — have entirely different views of what’s happening in the city.

The protesters believe now is a moment for the city to reckon with issues of systemic racism and over-policing Black and Brown communities, while city officials say now is the time to recognize the successes of the police department and the resilience of Detroiters during a year with lots of loss and uncertainty.

The tension seems to be best exemplified by the July 10 clash between protesters and police over the death of Hakim Littleton. Protests erupted on McNichols and San Juan that afternoon after police officers shot and killed Littleton. A crowd of demonstrators gathered in the area within hours of the shooting, and reporters and protesters began live streaming the protest.

Officers deployed tear gas in a residential neighborhood, used a chokehold to subdue Wallace, and donned riot gear to break up the protest briefly before it resumed as a march to the 12th Precinct a few miles away.

Police said they needed to subdue a fast-growing crowd. Craig held a news conference that night to provide information and share a video of the fatal shooting. He said officers were justified in using deadly force.

At the time, on a Facebook livestream of the protests some said they supported Craig and voiced their disapproval of the protest movement to defund DPD. But a month-and-a-half later, there is still disagreement about what the video shows and if killing Littleton was necessary.

In August, DWB along with 16 other civil rights and community-based organizations called for an independent investigation into the Littleton shooting. The Coalition for Police Transparency and Accountability wanted Michigan Attorney General Dana Nessel to lead the investigation, but Nessel’s office has said it won’t be getting involved.

More recently, Craig has taken to programs like “Tucker Carlson Tonight” and “Cavuto Live” on Fox News to further demonize the protesters as “misguided radicals that have tried to incite violence in our city.” Craig also recently took a helicopter ride with U.S. Attorney General William Barr to look at the progress of Operation Legend — the federal response to the city’s uptick in gun violence.

DWB was among the groups who were critical of Operation Legend when it launched last month and Operation Relentless Pursuit, a similar initiative that launched in December. Wallace spoke about the move to put more federal resources in Detroit and wonders why the federal government seems to care more about aiding law enforcement than helping Detroiters.

Although protesters may not like seeing federal agents here, Craig said in a joint statement with Mayor Duggan that the federal government is assisting in fighting gun violence, not stopping protesters, as some activists had feared when Operation Legend was announced.

“So long as those staff are used in the continuing effort to enforce federal laws on illegal gun trafficking and gang violence, [Detroit Police] will continue its strong partnership with those agencies,” the joint statement said.

On Aug. 22, police and protesters clashed again. Protesters, critical of additional federal agents in the city, had a showdown with Detroit police on Woodward.

Craig says his officers did what they had to do to prevent a “Seattle zone of lawlessness” from happening during demonstrations that turned violent. But the protesters, many of whom claim they were beaten and hospitalized, will say that police showed up in riot gear and brought the violence to them.

In the press conference announcing the lawsuit against the city of Detroit this week, several people present at the protest told stories of being pepper-sprayed or maced in the face while being held down, beaten or bruised with billy clubs, anddenied medical attention. One such person was himself a street medic who says he was beaten so badly he suffered broken ribs and a collapsed lung.

Along with the lawsuit, DWB filed for a temporary restraining order, which is asking the court to put an immediate stop to the tactics described in the lawsuit. It is unclear if the courts will approve the restraining order or even if the department will further review the incident that took place on Aug. 22. Neither group appears to be backing down.

Wallace said Tuesday that DWB will not privately meet with city officials again unless they publicly address the attacks on protesters.

What do you think? Are the protesters right about the department’s excessive force tactics or is Chief Craig right to call them misguided radicals? Is there anything that can be done to repair the relationship between the two sides? Let us know your thoughts on Twitter @BridgeDet313 and don’t forget to subscribe for more Bridge Detroit content.