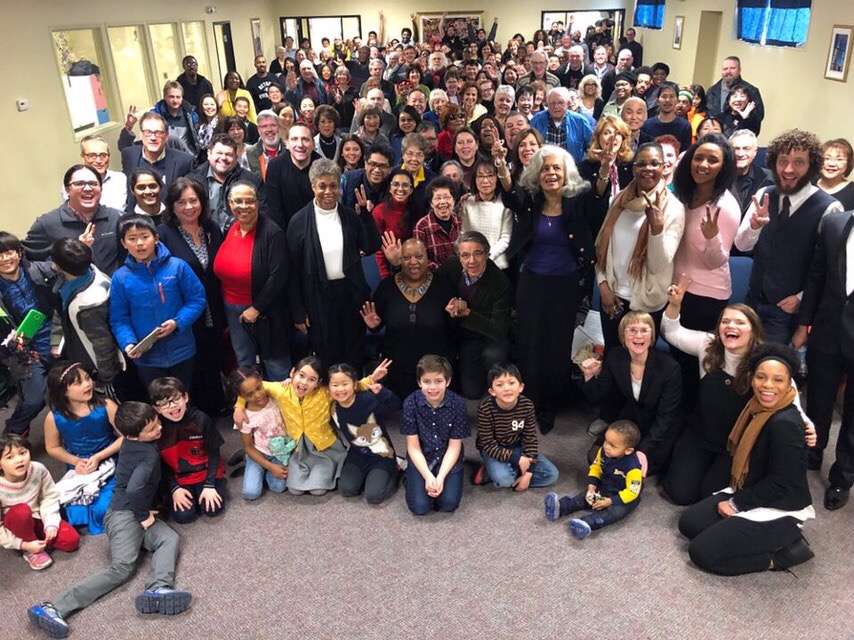 It’s been a hellish year. A good time, then, for Detroit to gain an institution devoted to peace and personal growth.

That’s what is planned for a former CVS in New Center. An international Buddhist organization with a track record of attracting Black and Latinx members has signed a lease to set up the Soka Gakkai International-USA Detroit Buddhist Center.

The building is at the southwest corner of Woodward and West Bethune avenues.  Across the street is the maintenance and operations facility for the QLine streetcars. Two blocks south is the intersection of Woodward and Grand Boulevard. The community center will occupy more than half of the 11,000-square-foot building, which has its own parking lot, according to members of the organization.

The community center is moving from Southfield. Its current location on West 12 Mile opened in 2005, said Tony Armstrong, a Detroit native and longtime member of the organization.

It’s long been a goal to move to Detroit, Armstrong said.

“For a lot of years we’ve called it the Detroit Community Center even when it’s been in Southfield,” Armstrong said. “This is just a continuum of the idea and spirit we’ve been working toward.”

More than 1,000 Metro Detroiters are members of the SGI-USA Buddhist community, said Danny Hall, a national spokesman for the organization.

There is strong support among local members to move to Detroit, Hall said, who is based in Washington. “They feel a kind of affinity to the experience of Detroit as of late; the struggles the city has gone through, but its history of flourishing and the opportunity to revitalize itself,” Hall said.

That strikes a chord for Buddhists, he said. “Especially, our tradition of the lotus flower, which is a very important symbol. It doesn’t really grow well in clean water, but, only in the dirtiest and muckiest swamps. But as it grows, the flowers appear very pure and pristine and it helps cleanse the water. In the same way, members feel like that through their Buddhist practice they are able to exert a positive transformative effect on the environment they are living in.”

The Soka Gakkai International (SGI) has 12 million practitioners in 192 countries and territories. Soka Gakkai emerged in Japan in the 1930s and reached prominence after World War II. SGI-USA has its headquarters in Santa Monica, California. Soka Gakkai means “value-creating society.”

SGI has no priests or clergy. It practices Buddhism as equals, encouraging one another to overcome life’s difficulties. SGI members base their practice on the Lotus Sutra and Nichiren Buddhism, which teaches that each person has within them courage, wisdom and compassion to face and surmount any of life’s challenges.

“We don’t have temples, we have local centers,” Hall said.  “We have lay leaders and volunteers. It’s a very democratized experience. “ Community centers are where “people go to chant together, to study together and encourage each other within the context of their daily lives.”

Detroit native Armstrong became a Buddhist in 1976 when he encountered the practice while serving in the Air Force in the Philippines. He grew up a Christian. “There are no negative feelings toward that experience, but I always considered Buddhism the next stepping stone in my journey.”

The emphasis of being the best person in your own community appealed to him, Armstrong said, who still lives in Detroit. His wife and children are also Buddhist. He was a Detroit firefighter for 18 years and he still works as a nurse.

“The practice mainly is in your home,” he said. “We pray, or chant, twice a day. We take this Buddha nature, take this spirit of peace to the rest of the world, out into your neighborhood, to your family, to your job. You move the world by moving your own community.”

The centers often host various chapters and departments within the local area, he said.  Sometimes that’s based on various neighborhoods, Armstrong said. “There have also been meetings for African American members, for Spanish speakers, for women, for younger people, for people over age 65,” Armstrong said, describing events that have gone on at the Southfield center.

The community center will have rooms for chanting and praying but also plenty of meeting space.

“We have a lot of members who do things culturally, artists and entertainers,” Armstrong said.

SGI-USA also has a larger proportion of Black and Latinx members than other convert Buddhist groups, according to several religious scholars. The latest estimate is that about 15 percent of SGI-USA are Black. Prominent members include recording artist Tina Turner and U.S. Rep. Hank Johnson, a Black Democrat from Georgia.

A Buddhist center is rare in Detroit. The Still Point Zen Buddhist Temple has been in a converted home in the Woodbridge neighborhood for close to two decades. In nearby Hamtramck, the Detroit Zen Center was founded in 1990.

The former CVS is being converted into the Buddhist community center. COVID19 has changed the original plan for the center to open by the end of this year. The new goal is to have staff working in early 2021.