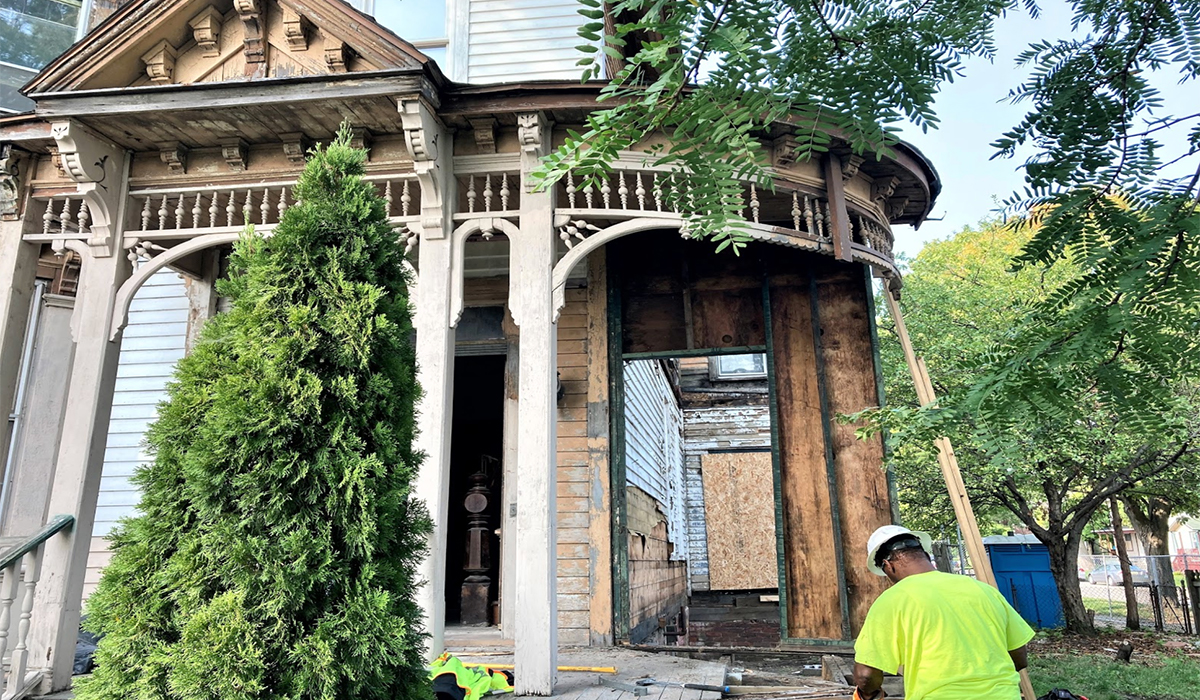 Renovation of a historic home in Corktown. Most Detroit homes were built before 1960 and many need major repairs. (Photo: Louis Aguilar/BridgeDetroit)

A key selling point in a proposed city plan to eliminate 16,000 blighted homes is that it will secure 8,000 of those properties and sell them. That campaign is called Proposal N for Neighborhoods. City government wants to borrow $250 million from Wall Street investors in the form of municipal bonds to fund the program. Proposal N is on Detroit’s ballot this November.

Mayor Mike Duggan and other Proposal N supporters contend the new goal of saving homes is why the current plan is better than a similar bond proposal rejected last year by City Council. That council rejection meant the earlier plan never made it to voters.

“We’re changing our approach now. Our first priority is we are going to save the 8,000 homes that are structurally sound,” said Duggan during the July debut of Proposal N.  Previously, the properties were targeted for demolition.

Proposal N’s focus is properties that have gone through tax foreclosure and are now owned by the Detroit Land Bank Authority.

Beyond that inventory, though, thousands more Detroit homes are falling apart and becoming dangerously unsafe, according to community groups and various studies. Finding affordable home repair is now viewed as a key way to strengthening neighborhoods and preventing blight, many Detroit housing advocates contend.

Eighty percent of  Detroit homes were built more than 60 years ago. And older residents make up a larger portion of Detroiters, U.S. Census data show.

Without the repairs, the homes become unhealthy to live in, and, the property’s value dwindles.

Eight in 10 housing units in the city were built before 1960, and 34.4 percent built before 1940, according to Census data. Nearly 27 percent of city households have residents who are 65 or older, according to the Southeast Michigan Council of Governments. And while the city’s overall population declines, the number of residents between 55 and 64 is growing.

Longtime Detroiter Idella Dixson is a retired social worker who has lived in and owned her northwest home since 1974. A decades-long stabilizing force in her neighborhood, she raised three children in her home, and now her grandchildren spend time there.

“I took out a home-equity loan when I was still working, but I’ve been retired for 10 years now. I don’t want to take that on again on my fixed income,” she said.

Shingles began to fall off her roof about six years ago. Her windows are becoming less able to block out the fierce winters. For several years, she’s been applied to city programs aimed at helping with home repairs, including one that offers no-interest loans for repair. She’s still waiting.

Last year, she applied for a $7,500 home repair grant through the nonprofit U-Snap-Bac. She was approved but then the nonprofit ran out of grant money for the year. This year, she received the funding through U-Snap-Bac. Her roof is repaired. She still hopes to get city help to upgrade her windows.

Dixson sometimes thinks about moving back down South where she was born. “I’m grateful. It gives me options because it increases the value of my home,” she said. “But, beyond that, I would just hate for the home to fall apart and just go empty. That’s terrible to see when that happens.”

More than a dozen Detroit nonprofits that deal with housing issues have programs to help residents find low-interest loans and grants for home repair.

Most of those “programs are at capacity, with long wait lists”, according to a 2019 home repair resource guide by Poverty Solutions at the University of Michigan, a research initiative by the university.

The U-M group is compiling a report expected to be released later this year. The repair guide, released in October 2019,  lists the kind of funding available and the local agencies that offer assistance.

The U-Snap-Bac nonprofit has been offering home repair programs for 13 years, said Linda Smith, executive director of the organization.

“Definitely, the need is growing,” Smith said. “More people are living on fixed incomes. That doesn’t leave a lot to pay for a home-equity loan, even if one is available to them.”

Last year, more than 500 people applied for the nonprofit’s $7,500 grant for home repairs. It was able to help 40 homeowners. The funding comes from a regional federal bank.

“There is a clear growing need,” said Ted Phillips, executive director of the group.  A “major cause,” he said, is there are more renters than homeowners in Detroit. More rental properties lead to more deferred maintenance on many properties, he said.

Late last decade, the number of people renting homes in Detroit became higher than the number of homeowners for the first time since 1950, according to a 2017 Detroit Future City report.

Behind on taxes, behind on repairs

It’s no surprise that many homeowners behind on their property taxes have delayed home repairs.

A 2019 survey of tax-delinquent homes estimates that 38 percent of those properties are in need of critical repair. The estimate is from the 2,500 residents who told the Neighbor to Neighbor survey that key home repairs have often been delayed indefinitely due to lack of money.  The survey tried to reach residents of the 57,518 tax-delinquent homes in the city, and the response rate was 59 percent.

“That 38 percent is a good sample size,” of tax-delinquent homes that need major repairs, said Laura Grannemann, Vice President of Strategic Investments for the Quicken Loans Community Fund, which pays for and manages the annual survey. That amounts to 21,856 homes in need of  major repairs.

The Quicken Loans Community Fund has contributed $2 million in repair grants and no-interest loans in a program called Make It Home. Fixing the roof is the most common need followed by furnace, water heater and plumbing repairs, according to the community fund.

The city estimates that 8,000 homes owned by Detroit Land Bank are salvageable.  But the number changes as properties sit unoccupied, according to city documents. City officials also say they will work with community groups to help identify properties that can be saved from demolition.

The city doesn’t plan to fully restore the homes. Just to do enough work on the properties to prevent further deterioration and be ready to sell, city documents show. That means getting rid of debris, fixing a leaking roof, if necessary, and securing the windows and doors. The city estimates spending about $15,000 on each home to secure it, said Arthur Jemison, group executive for Housing, Planning and Development for the City of Detroit.

Once a home is secured, the city aims to make it quickly available for sale through the city land bank so the property doesn’t become blighted again, Jemison said in a recent interview on the podcast Authentically Detroit.

To help buyers of those secured homes, the city is also working to “create a loan product that gets people a rehab loan of $50,000 to $60,000,” Jemison said on the podcast. The potential loan program would be available for people with low credit scores. Further, the goal would be to keep monthly payments in the “$500 to $600 range,” Jemison said.