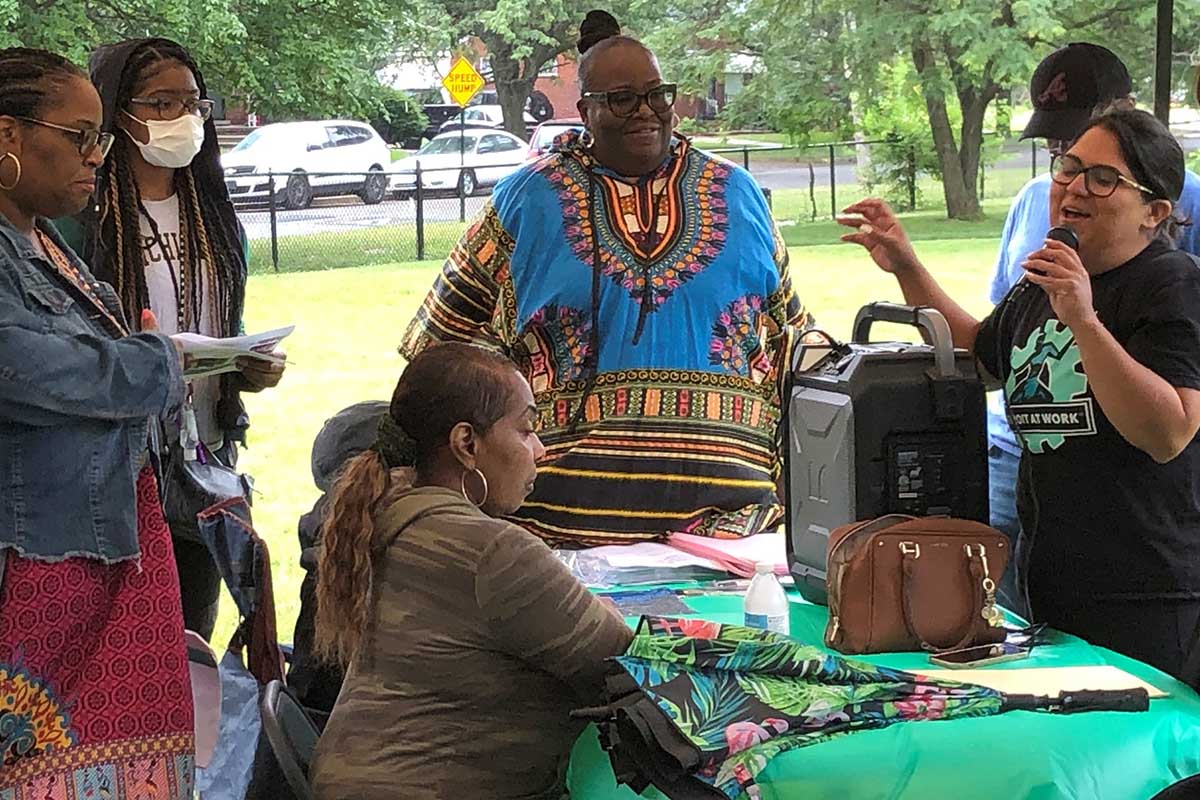 As Mayor Mike Duggan presses to secure local approval on how to spend $426 million in American Rescue Plan Act funds, a rising number of voices are emerging on how the epic amount of federal money should be used to transform Detroit.

On Tuesday, City Council can vote to either approve, reject or delay action on Duggan’s plan. The Mayor has described the federal funding called American Rescue Plan Act (ARPA) as a once-in-lifetime-chance to lift Detroit out of poverty.

Here is a link of Duggan’s resolution to the City Council outlining his spending priorities.

Duggan’s priorities are based on six broad categories that he outlined in late May. Duggan officials then attended 60 community meetings held across the city, and posted an online survey asking  residents to rank the categories. The categories: fight intergenerational poverty; increase neighborhood investment; spruce up parks and recreation centers and cultural assets; improve public safety; reduce the digital divide; and boost small business.

More than 3,200 participated in the meetings. The City said it received 1,014 responses to the survey.  To see the survey results, go to this City link.

Bridge Detroit, Outlier Media and Detroit Documenters teamed up to attend or listen to a dozen community meetings. One event was the Esper Street/Robert Aviation block meeting held on a rainy Juneteenth. Typical of most community meetings, it was an intimate gathering of neighbors. About 25 residents huddled under a tent set up in Harold G. Cross Jr. Park to hear two City officials outline Duggan’s priorities.

“We appreciate being heard. This really hasn’t sunk in yet; how much of an opportunity this represents,” said Sabrina Luvine.

People listened more than talked. Two residents brought up home repairs. Two others asked why paying back the thousands of homeowners who paid too much in property tax during the Great Recession was not part of Duggan’s plan. (It’s not a permissible use for the funding, officials said).

Someone brought up the need for more stop signs. Another said they were sick of trash-filled streets and alleys. Another resident questioned why public safety and more police funding to police was being considered the same thing by the Duggan administration. (City officials said they would have to get back to them on that.) 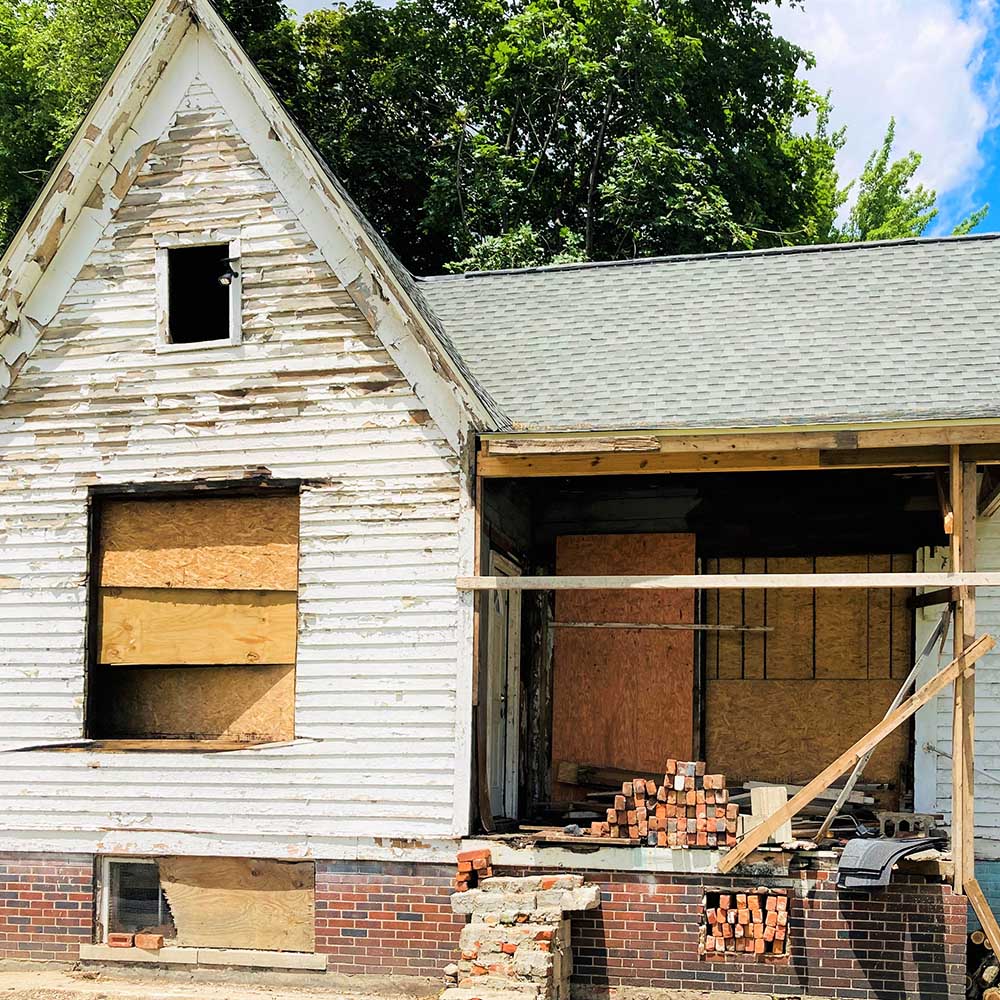 Home repair is the top priority named by Detroters when asked how the City should spend American Rescue Plan Act funding. (BridgeDetroit photo by Louis Aguilar)

“Help with home improvement needs is long overdue,” one Virginia Park resident said at a community meeting.  “We’re talking about issues that make some of our beautiful homes dangerous for people to live in. We need that help.”

An attendee at a District 4 meeting said the need for stabilizing homes was high: “There are so many beautiful homes and neighborhoods that are in need.”

Many residents who attended meetings wanted more time to digest the information about the funding.

“This is a great opportunity. I appreciate the chance, but how can you expect to learn the details and then vote on the mayor’s recommendations” within a few minutes of a meeting, a Virginia Park resident asked.

Angela Wilson, during a District 6 meeting, said, “It’s unfair for the city to want us to only focus on what’s within the six categories when more funds should be allocated to affordable housing.”

Samantha Knight, during a District 3 and 4 meeting, said, “It’s not easy to prioritize; the categories don’t make sense.”

The survey results released by the City didn’t reveal how many residents asked for more time to learn about the ARPA funding. 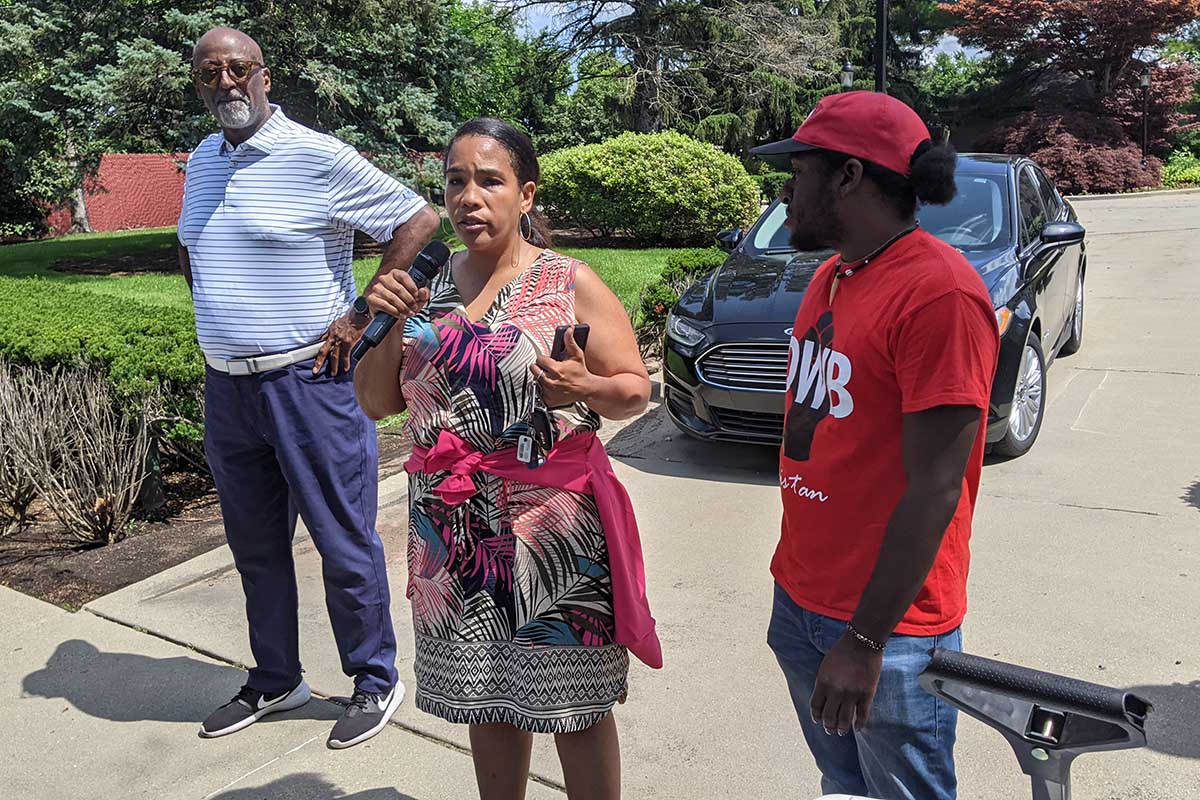 Anthony Adams, Nicole Small and Tristan Taylor were among a group of activists that gathered at the Manoogian Mansion on Monday to urge the City Council to vote against Mayor Mike Duggan’s ARPA spending plan. (BridgeDetroit photo by Bryce Huffman)

Part of the reason the Duggan administration seeks approval is because the new fiscal year starts July 1. The $426 million is just part of $826 million that the City is getting through ARPA. The City aims to use $250.2 million to offset the revenue shortfalls caused by the economic impact of COVID-19. The sooner the money can be used to fill the gaping budget cuts, the better, officials contend.

Home repair may be the people’s choice, but it is not Duggan’s. His administration is recommending spending more on other issues, ranging from razing empty commercial buildings, boosting small-business investments and expanding various public safety measures.

Duggan has earmarked $30 million for home repair for properties owned by senior citizens, low-income and disabled residents. That’s $10 million more than originally proposed, and many more issues will get more funding. One example is the $95 million earmarked to tear down vacant commercial and industrial buildings.  No one brought up that issue during the dozen meetings attended by BridgeDetroit, Outlier Media or Detroit Documenters.

At two separate City Council meetings last week, several City officials said the $30 million for home repair is partially based on the amount of contractors who would be able to do the work. Also, other funding appears to be available, officials said.

The need for major home repair — with leaking roofs, broken furnaces and faulty wiring among the top issues — has reached crisis level citywide. It’s a health risk to the many residents living in the conditions. The dwellings undermine the rebounding housing market in many neighborhoods because it lowers the overall value of residential property.

One U-M study estimates that more than 24,000 housing units in Detroit are “severely or moderately inadequate” — a description covering a wide range of risky living conditions. It’s the first time any group has attempted to estimate the number of Detroit housing units in need of urgent repair. The 24,000 figure represents 5 percent of the city’s occupied residences. But many nonprofits dealing with the issue say 24,000 vastly undercounts the real number of Detroit residences in urgent need.

“Neither my colleagues’ suggestions, nor the mayor’s …. proposal takes the steps needed to address the systems that keep Detroiters oppressed,” Castañeda-López said in a press statement. “The Mayor’s ARPA proposal perpetuates the status quo, benefits only certain segments of the population, and does not address racial, social or environmental inequities.”

On Monday, Councilmember James Tate joined a coalition of grassroots groups, called LIVE FREE Detroit, that called for $16 million to help fund frontline workers who work directly with gun violence. Members such as Pastor Mo Hardwick, founding pastor of the Power Ministry’s Church, said they have risked their lives for their work and often offer immediate comfort to people in crisis.

“When that 2-year-old boy was shot on the freeway, it was activists like me who were there for the family,” Hardwick said. He’s often put himself in dangerous situations to help quell potential violent scenes, he added. “It’s activists like us who need to get paid” for their roles, he said.

A coalition of about 30 progressive Detroiters gathered outside the Manoogian Mansion on the city’s east side on Monday to urge the City Council to vote against Duggan’s plan.

“Like some of the people who have holes in their roof, and they can’t get them repaired because now you want them to go get a loan because you rather take the money and go give it to suburban contractors,” Smalls said.  “Or you want to give away land to the rich like Dan Gilbert and everyone else, but there’s never any benefits for us.”

This story was done in partnership with Outlier Media and the Detroit Documenters.

The Detroit Documenters and BridgeDetroit have teamed up to better understand and document city residents’ spending priorities for the American Rescue Plan Act.