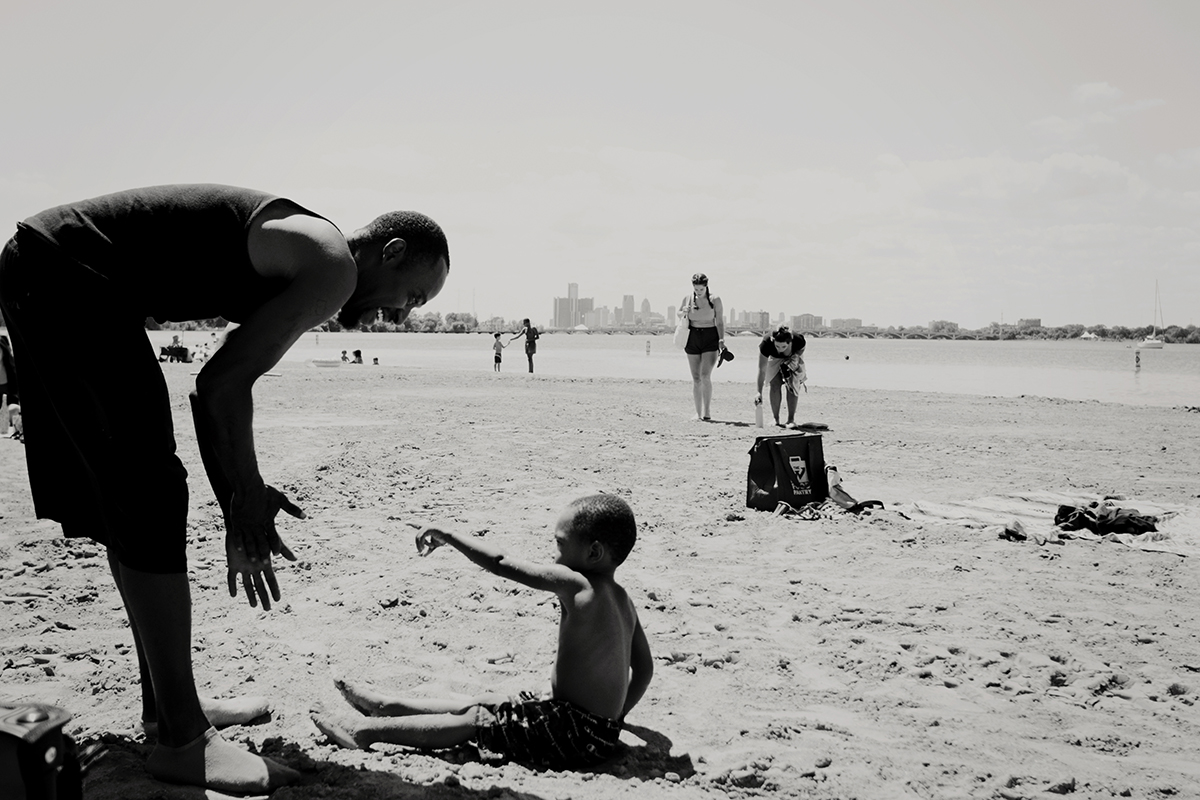 Kevin Jones, 31, brings his children to Belle Isle to swim at the beach. His three-year-old son enjoys playing on the sandy beach. (photo by Cybelle Codish) 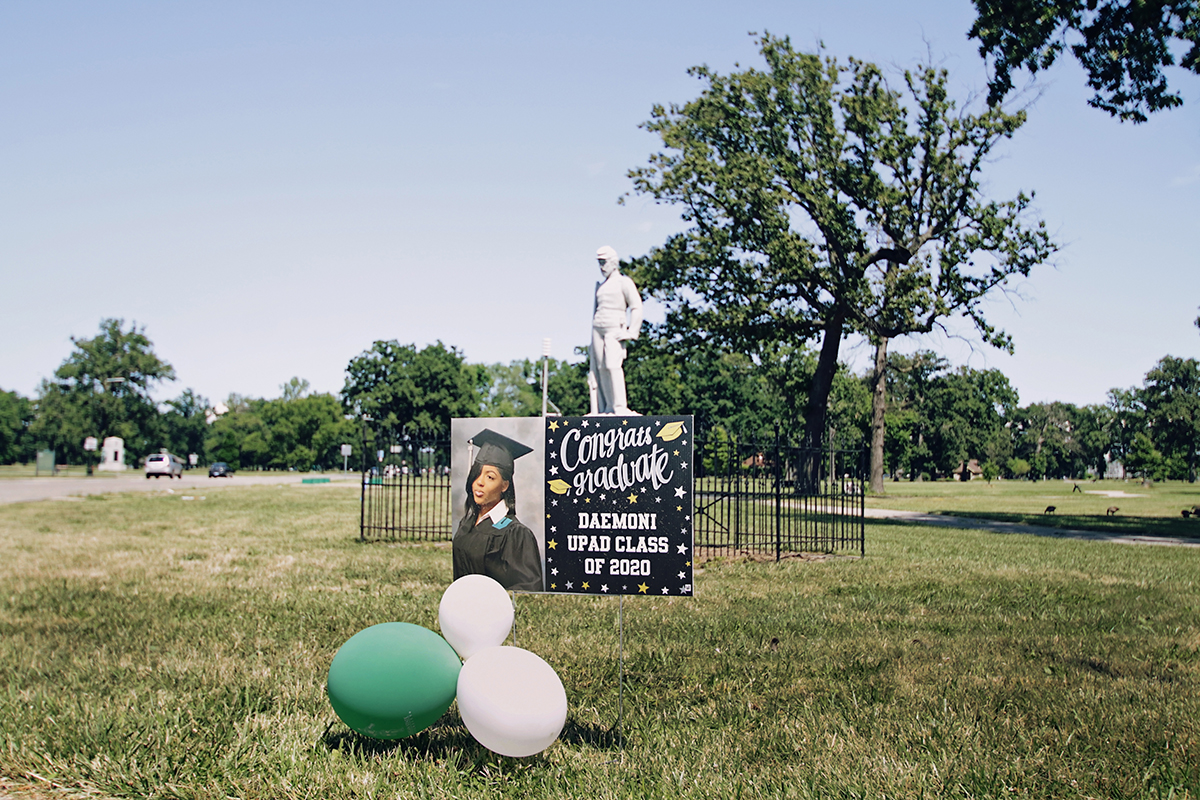 Generations of Detroiters have held celebrations with family and friends at Belle Isle. (photo by Cybelle Codish) 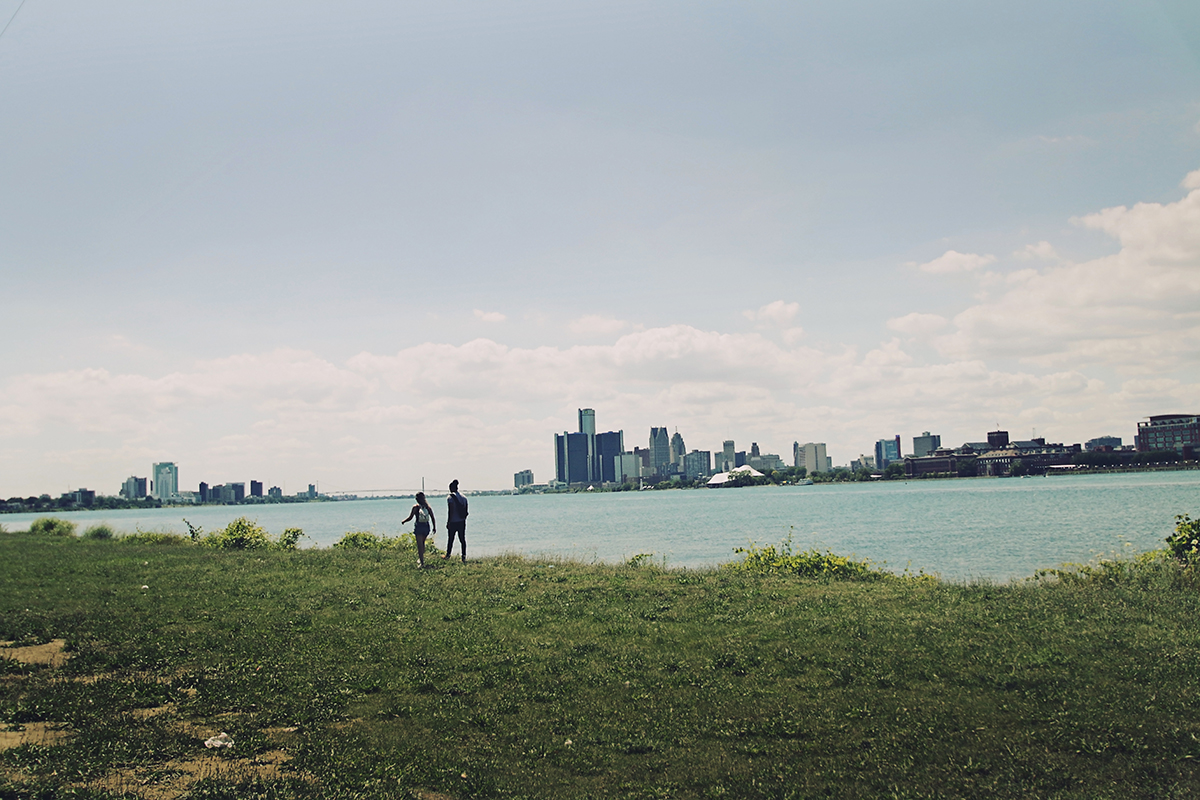 Belle Isle is located along the Detroit River. The 982-acre park sits between Detroit and Windsor, Ontario, giving visitors a view of two countries at one time. (photo by Cybelle Codish) 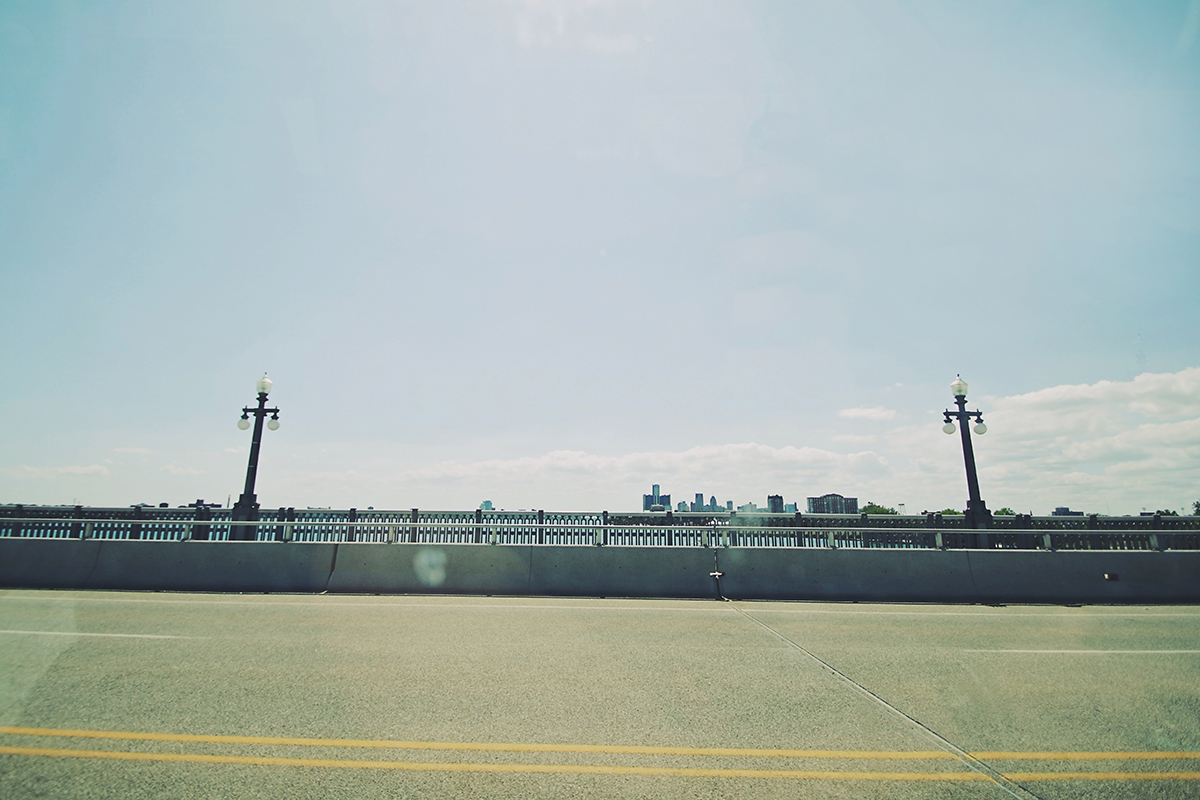 Visitors access Belle Isle by bridge on the east side of Detroit. (photo by Cybelle Codish) 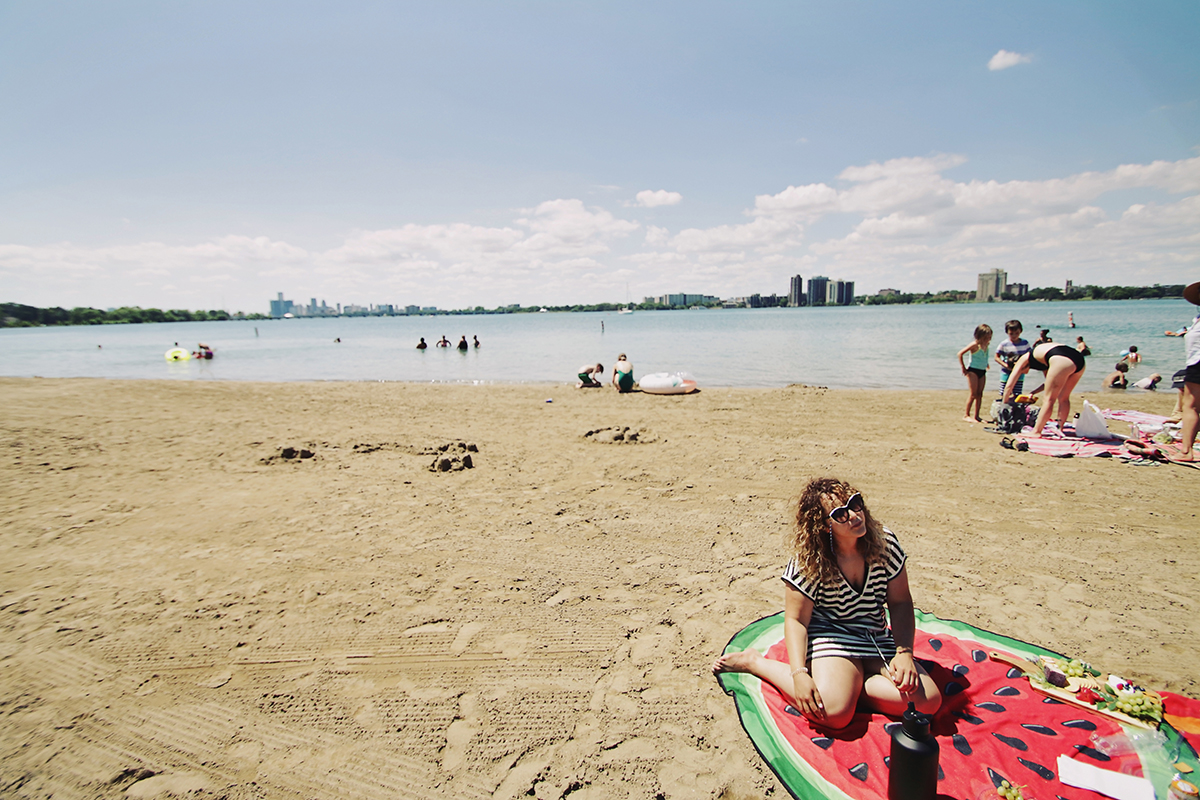 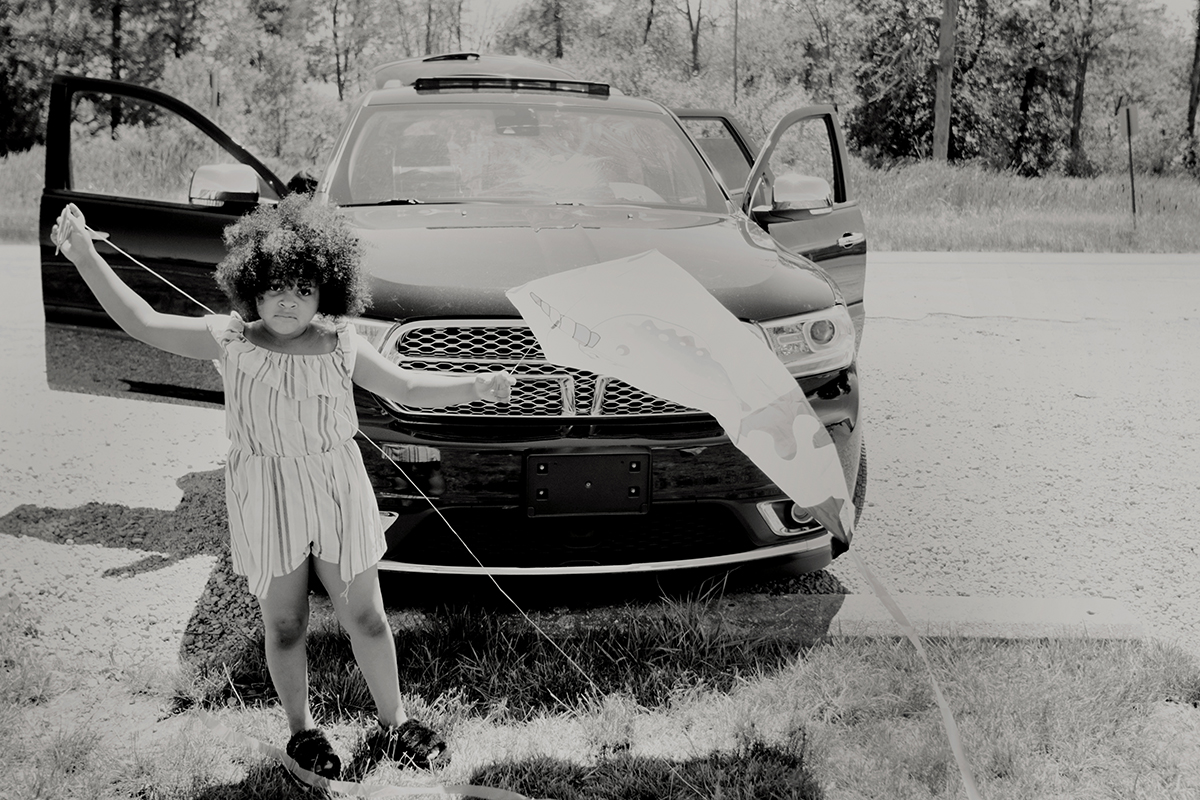 Belle Isle Park is known for being a family-friendly space for Detroiters to enjoy. (photo by Cybelle Codish) 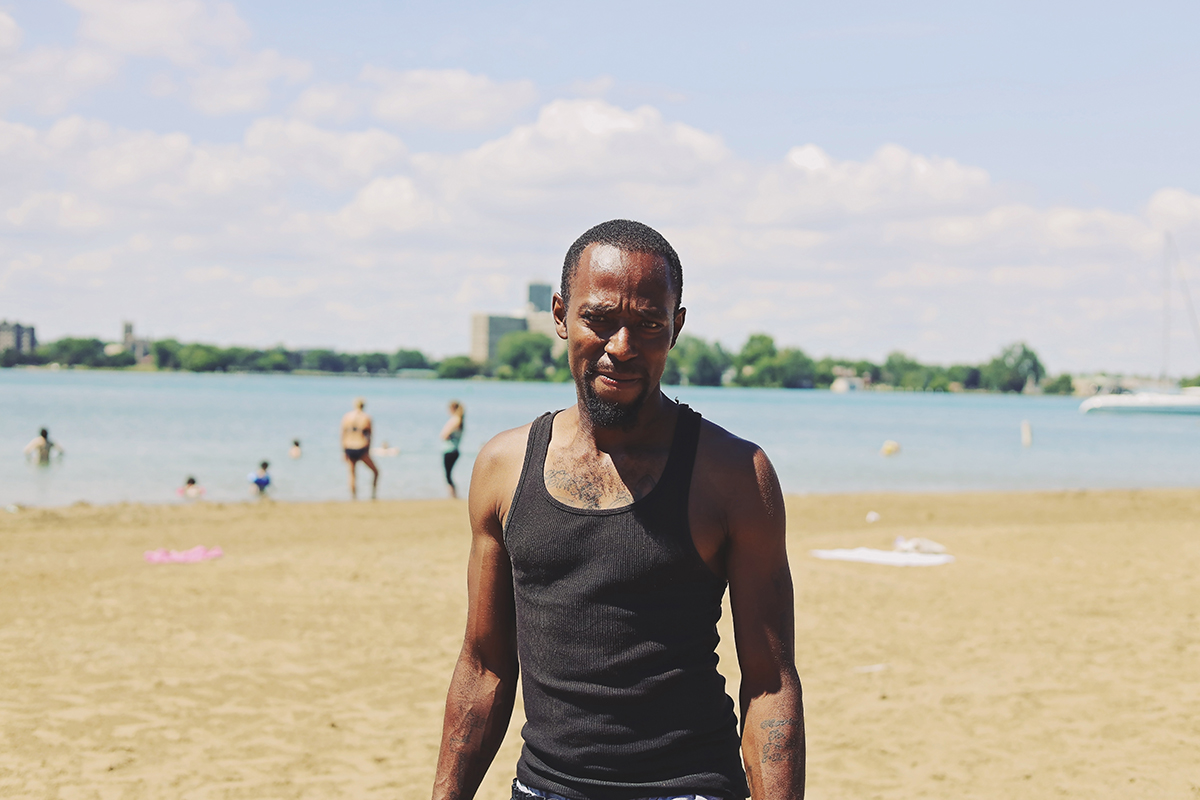 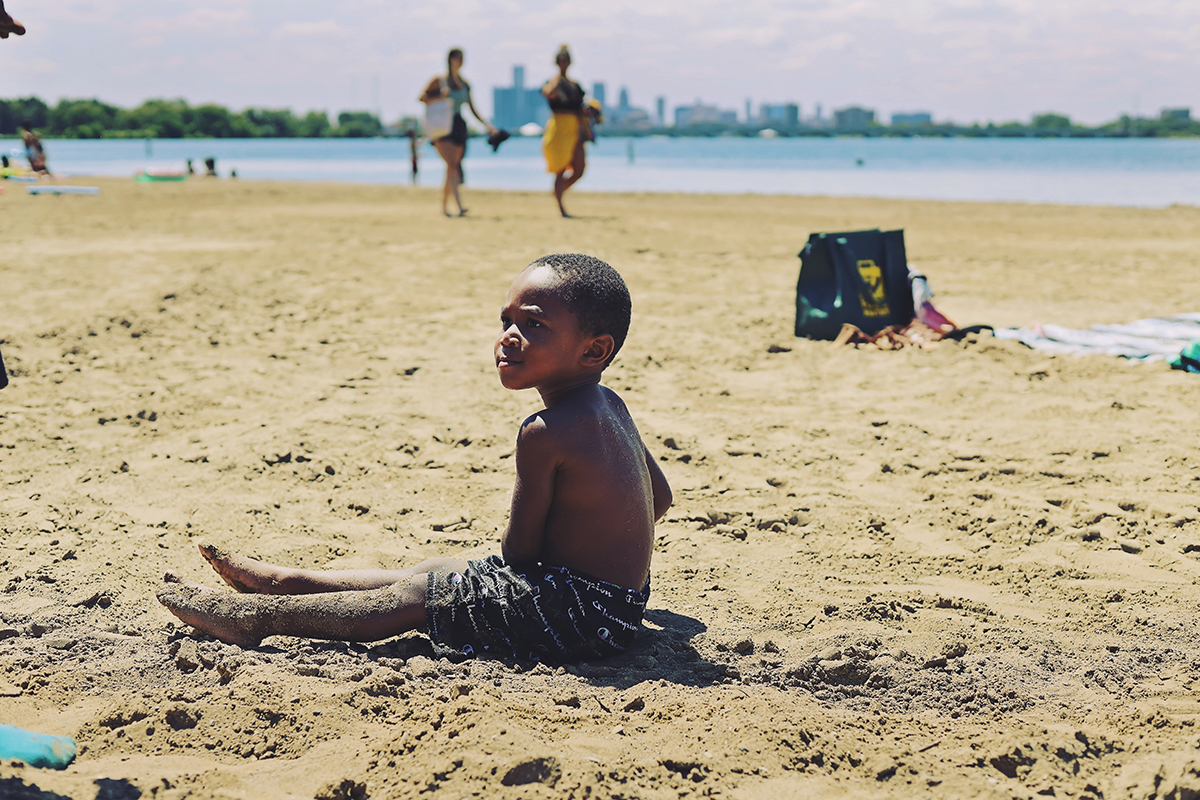 The swimming beach at Belle Isle is a place for everyone to enjoy the sandy beach and cool water during the summer months. (photo by Cybelle Codish) 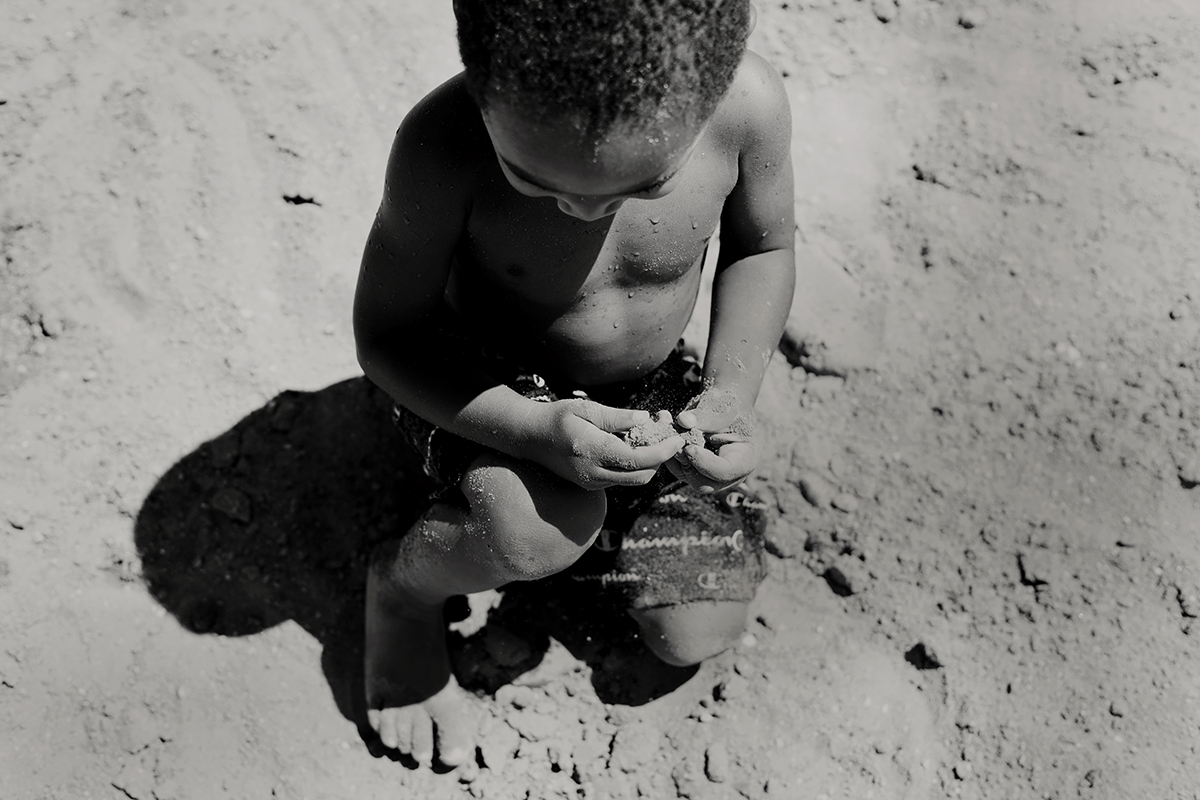 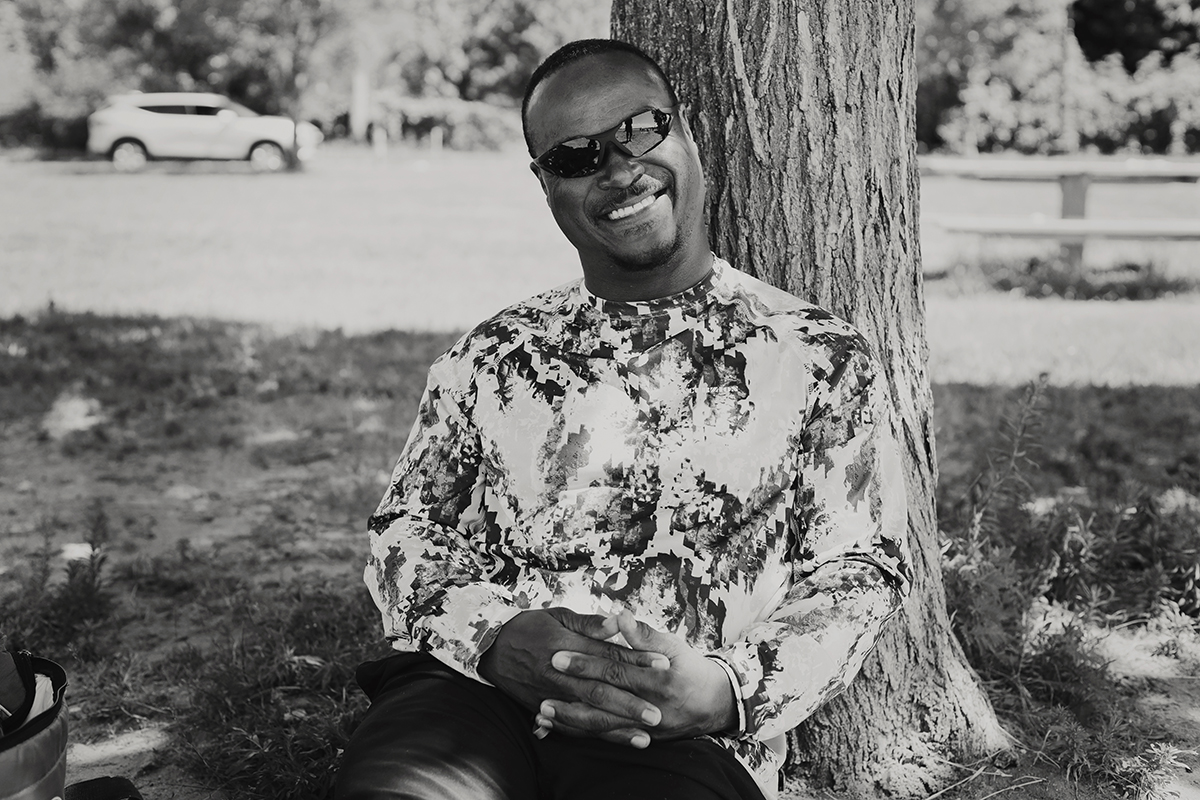 James Hughes, 47, returned to Detroit due to family deaths during the coronavirus pandemic. He has used Belle Isle as a place for peace and relaxation during this difficult time. (photo by Cybelle Codish) 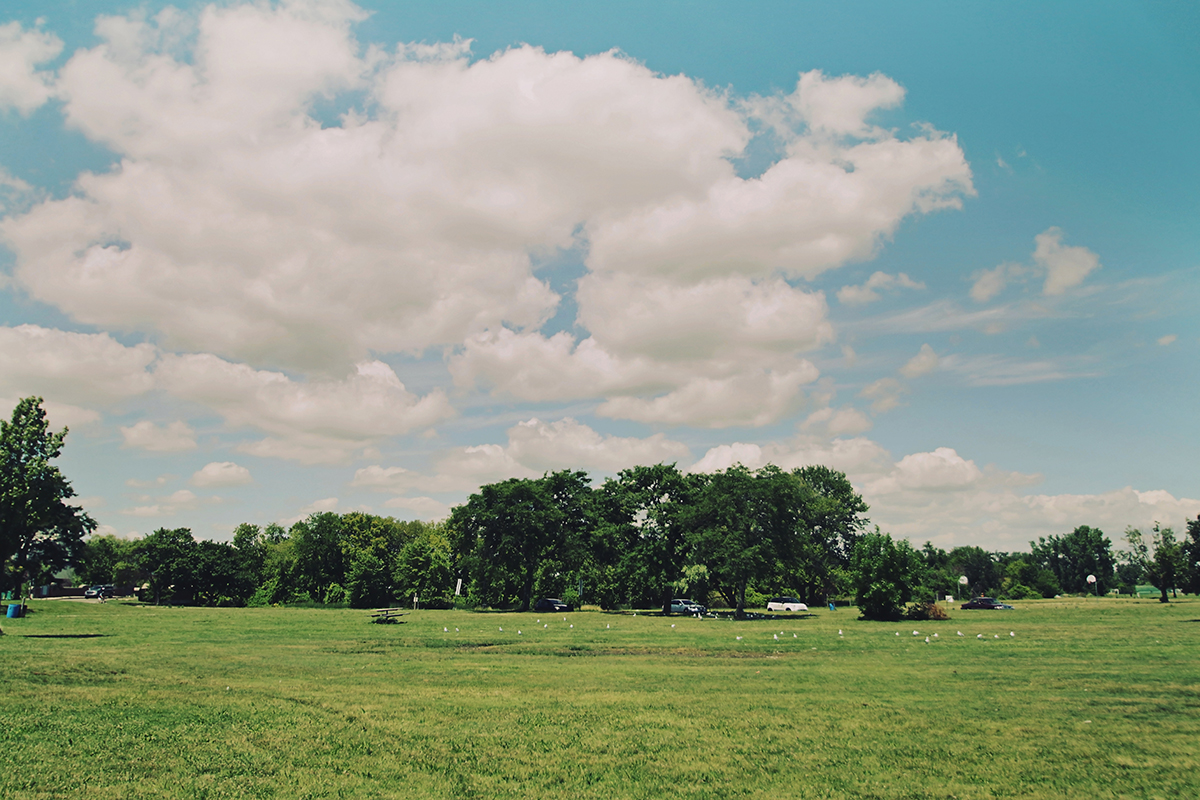 Belle Isle is one of Detroit's many beautiful assets. (photo by Cybelle Codish) 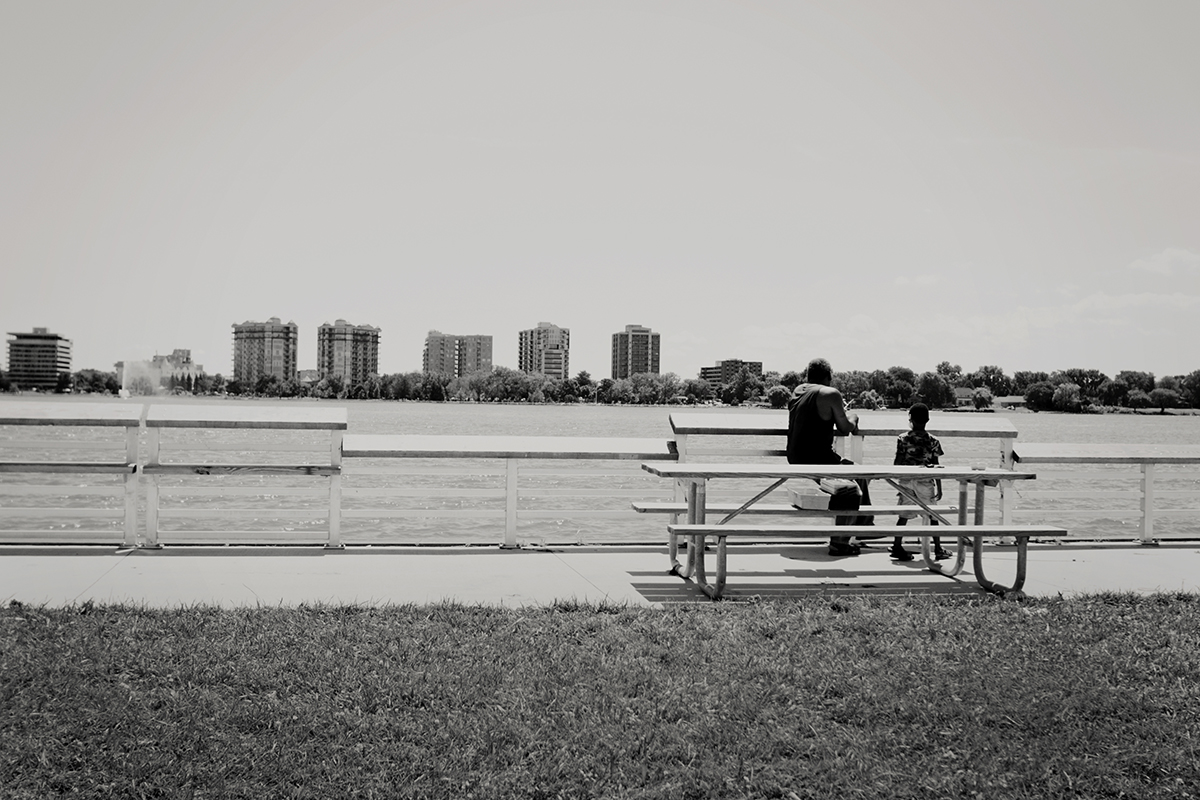 David Alexander sat on a bench teaching his four-year-old son to fish at Belle Isle. (photo by Cybelle Codish) 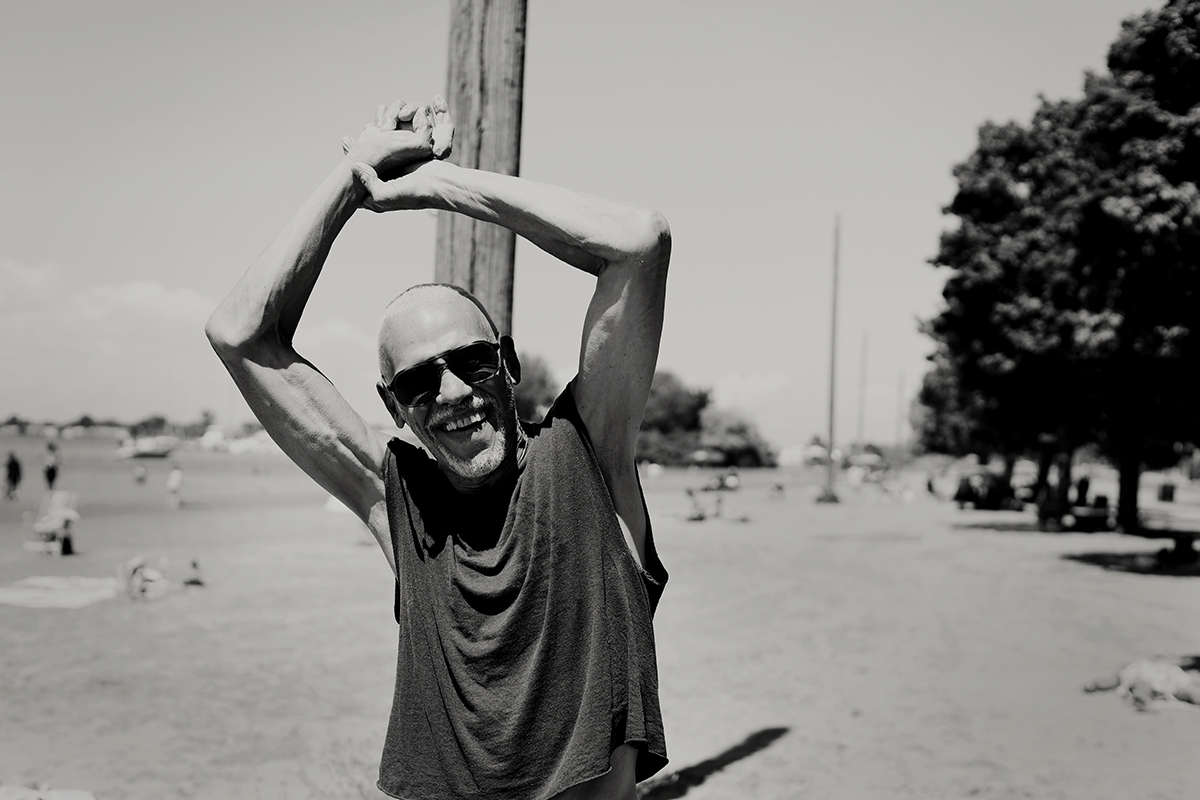 Errol Bell, 73, said he rides the DDOT bus at least once a week in the summer months to swim at Belle Isle. (photo by Cybelle Codish) 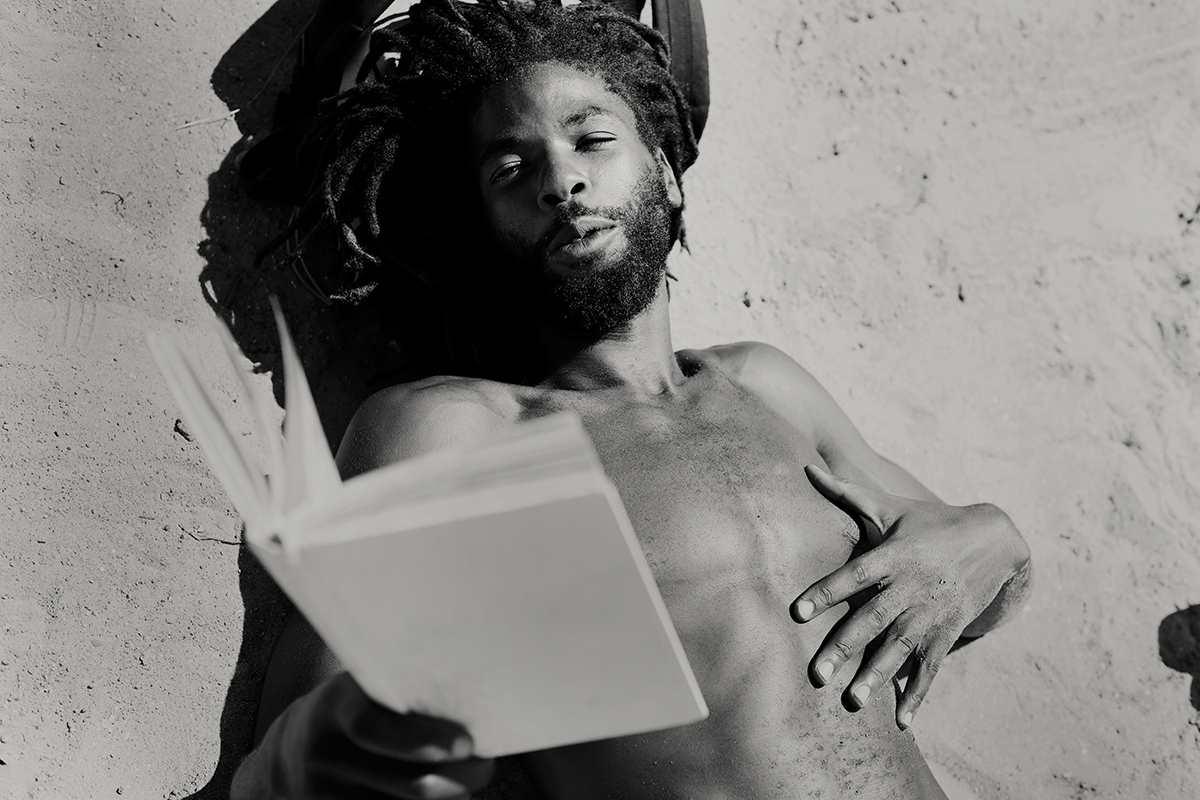 Darius, a 29-year-old Detroiter, laid on the beach at Belle Isle reading In Search of Ancient Gods. He said he rode his bike from the Brightmoor neighborhood to the island. (photo by Cybelle Codish) 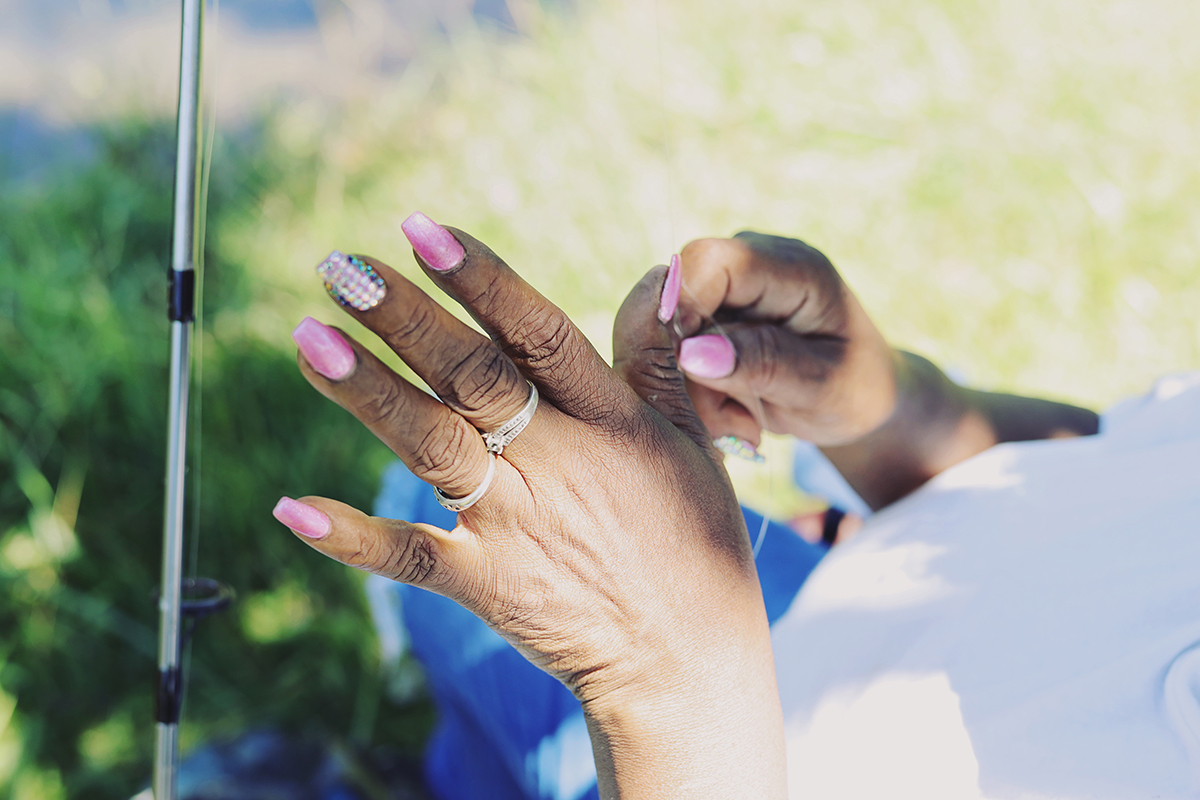 Pat Parks showed off her manicure while fishing at Belle Isle. (photo by Cybelle Codish) 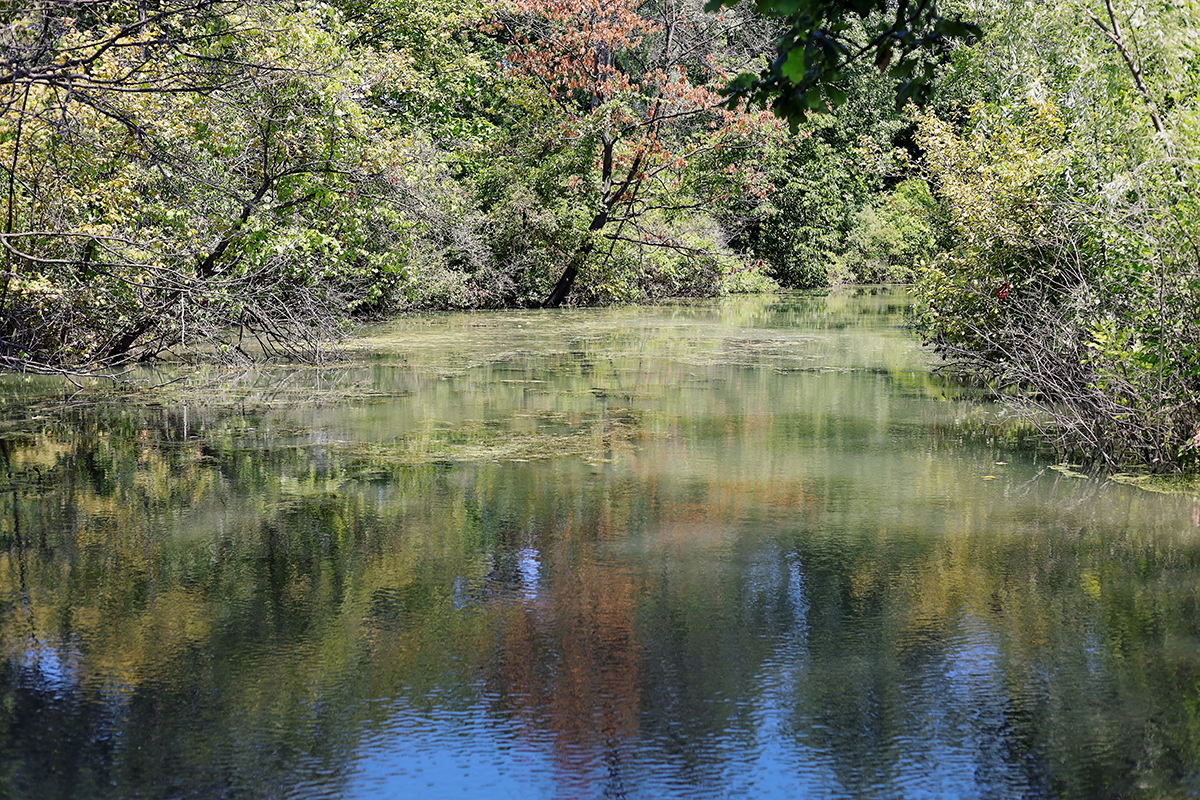 High water levels across the Great Lakes have caused excessive flooding on Belle Isle this year. (photo by Cybelle Codish) 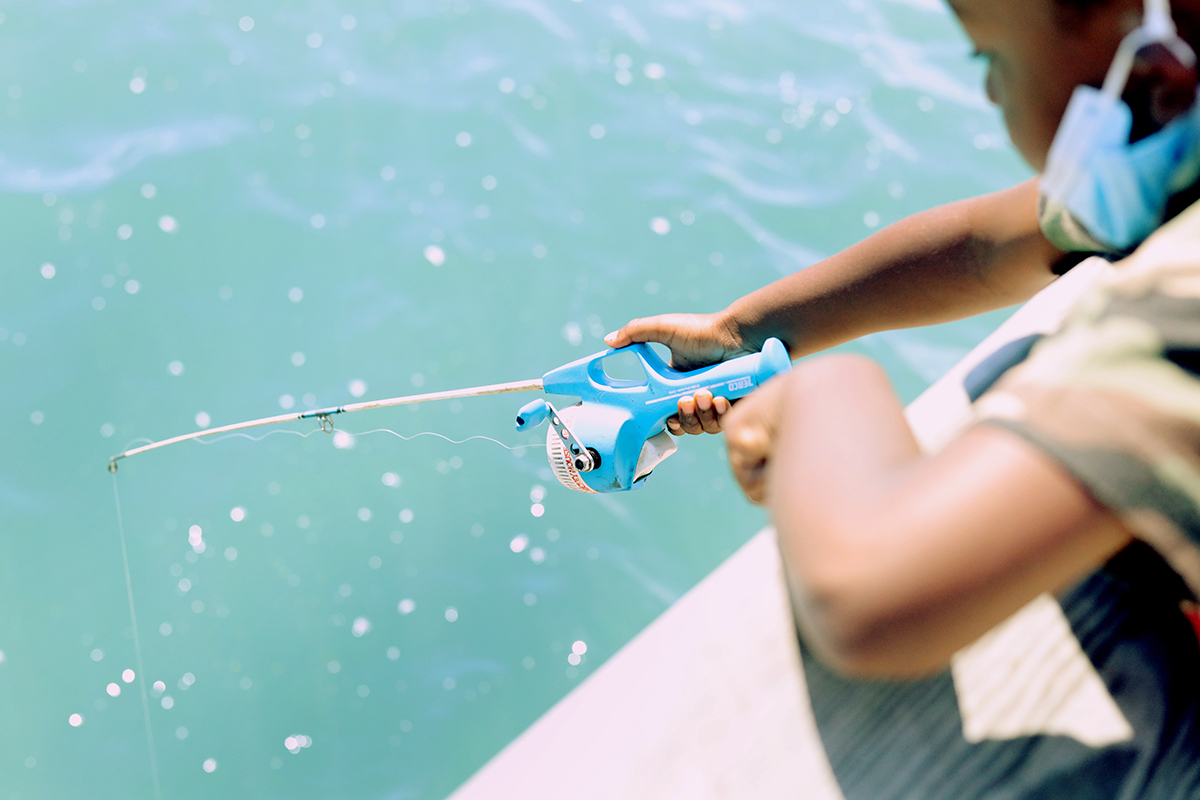 Belle Isle offers the opportunity for every Detroiter, and Michigander, to learn about and participate in outdoor activities. (photo by Cybelle Codish) 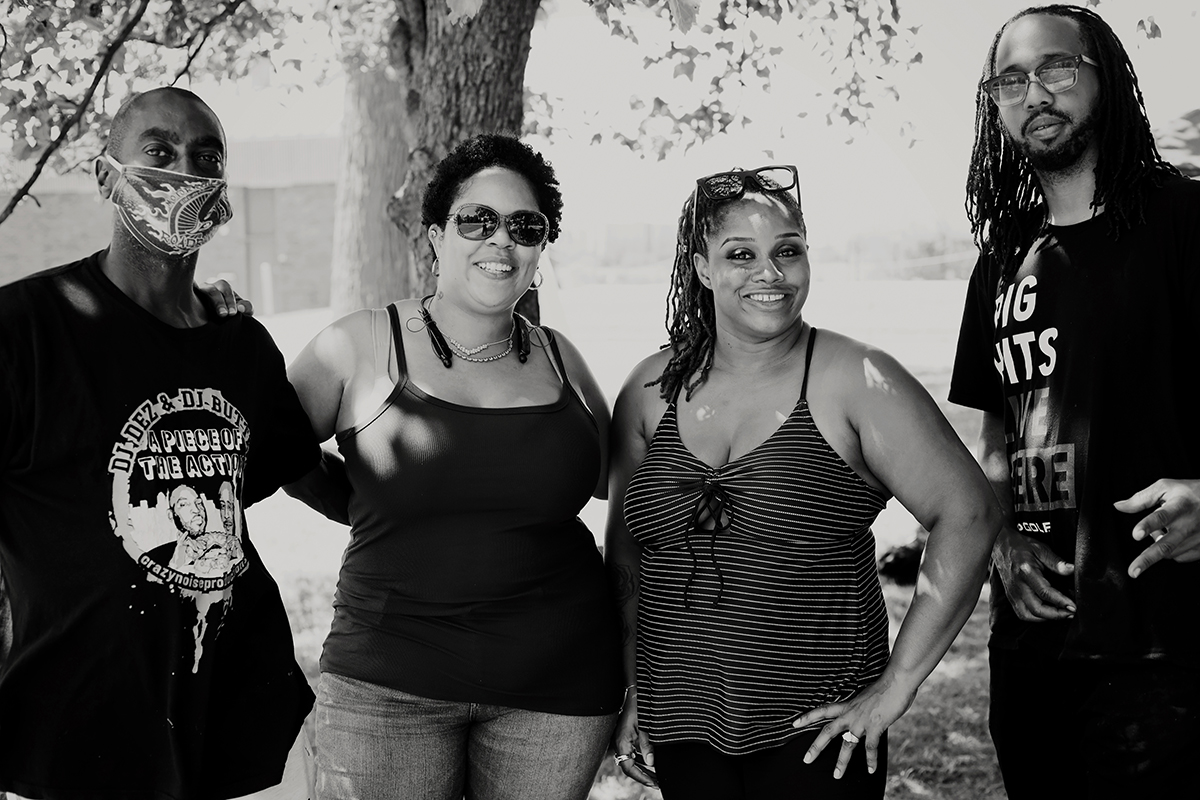 Members of the Motor City Runners bike club gathered in fellowship at Belle Isle in July, 2020. (photo by Cybelle Codish) 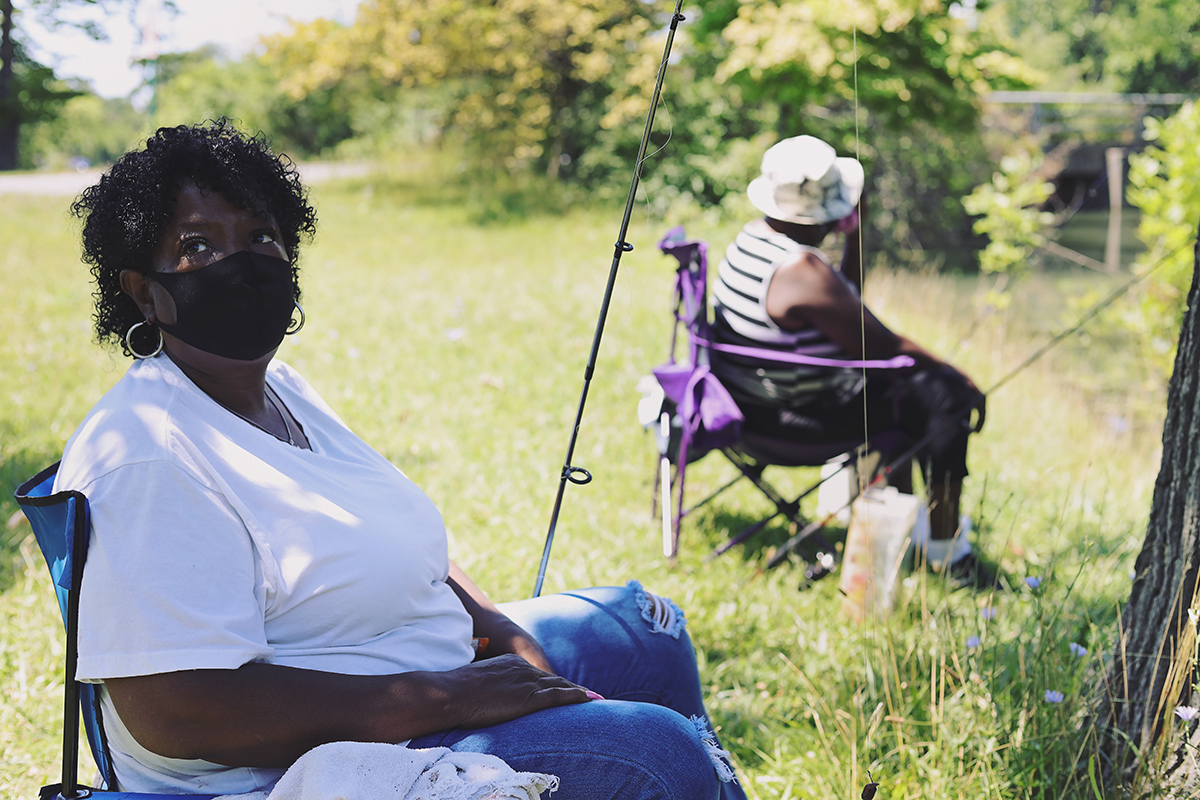 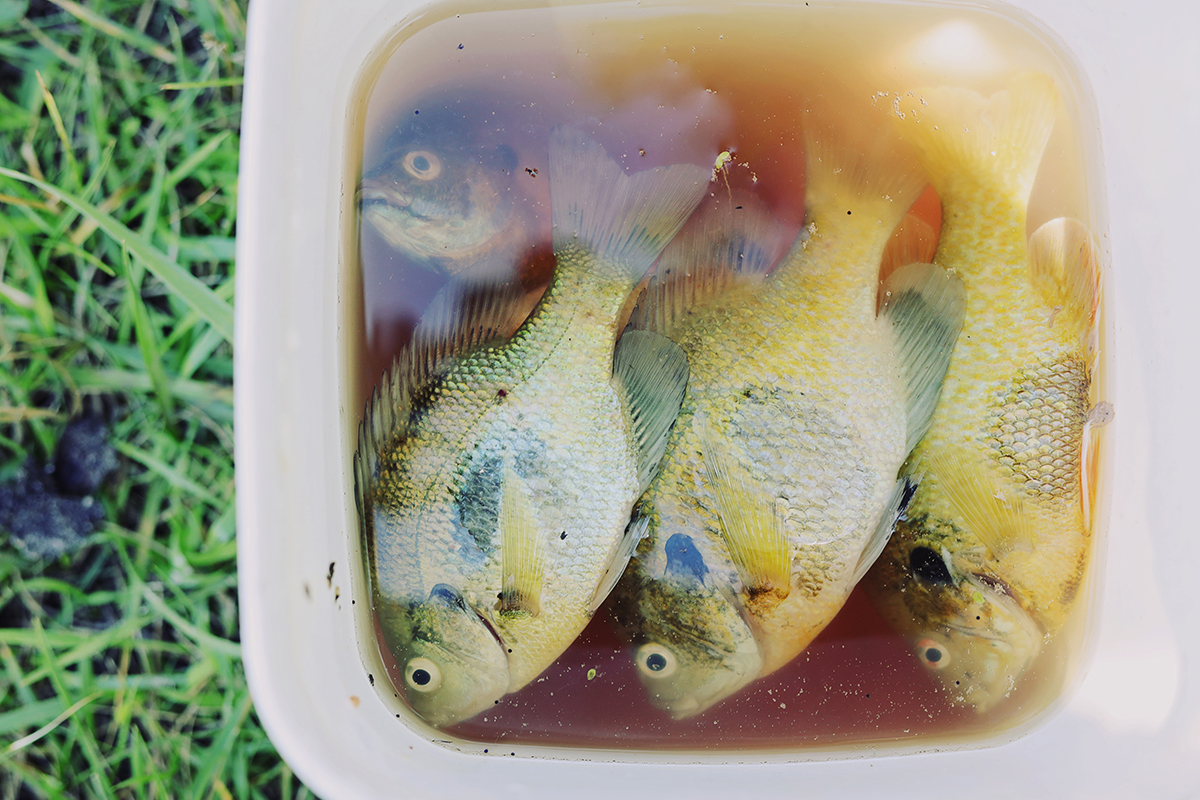 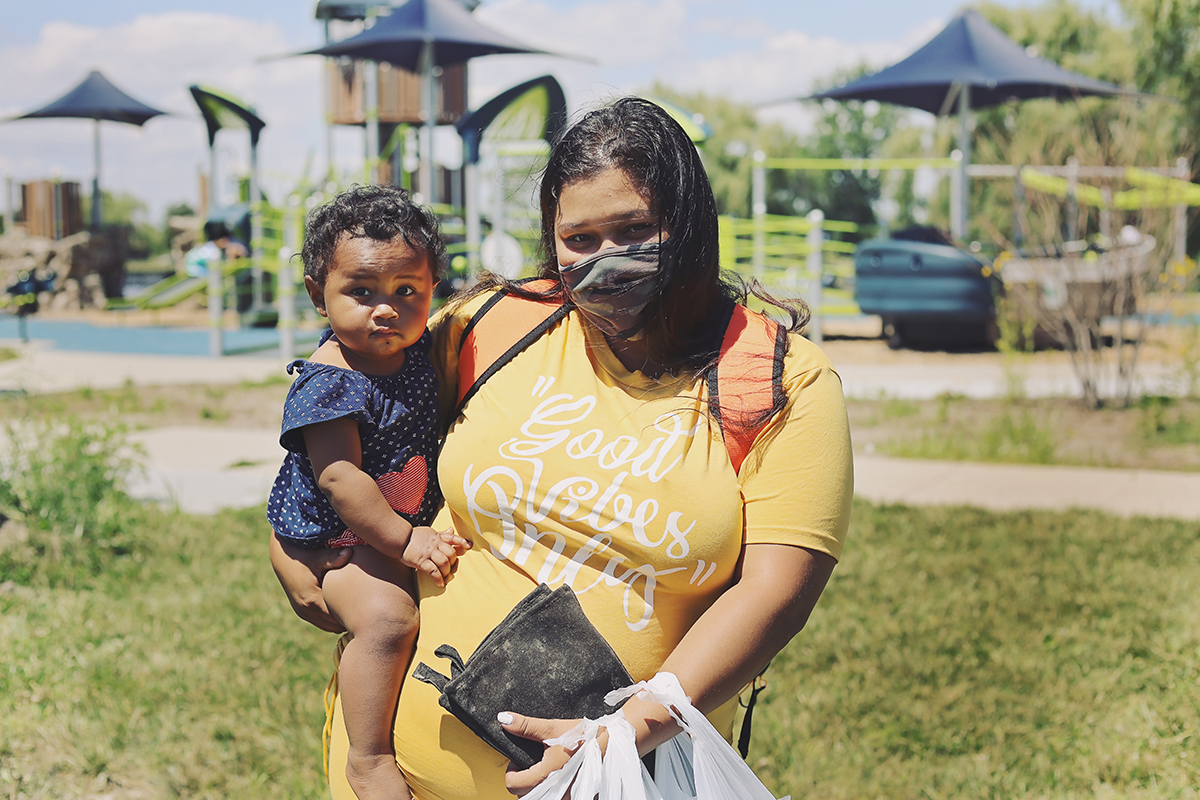 Kanoelani Garibaldi, 28, visits Belle Isle with her family often. The mother of six said her family usually spends an entire day at the park. (photo by Cybelle Codish)

There have been few opportunities for friends and families to gather this year. Government restrictions put in place to combat the spread of coronavirus have changed everyday life, put events and celebrations of special occasions on hold or canceled them altogether. Happiness, in the presence of others, has completely changed in 2020.

But there’s at least one asset in Detroit that continues to uphold the relationships, celebrations, and togetherness that Detroiters value: Belle Isle. The park, which was developed in the late 19th century,  has a long history of sustaining local wildlife, hosting numerous family reunions, and serving as a place for overall outdoor fun.

Belle Isle is the respite Detroiters, and Michiganders, have needed from the events of 2020.

Pat Parks sat by a nature walk path at Belle Isle last week. The 64-year-old Detroiter sat with her sister-in-law fishing in the afternoon. Parks said she has visited Belle Isle since she was a child and reminisced about the days when the park offered horseback riding and had its own zoo. Now, she visits with her family to find peace. She said the park is “exceptional.”

“You’ve got to come and see it to believe it; it’s beautiful,” Parks said. “I think it’s absolutely beautiful.”

Attractions at Belle Isle and updates during coronavirus pandemic:

The 982-acre park is managed by the State of Michigan. It sits on the Detroit River between Detroit and Windsor, Ontario. It houses soccer fields, basketball courts and pathways for kayaking and biking. Popular structures like the giant yellow slide, Anna Scripps Whitcomb Conservatory, the James Scott Memorial Fountain and others across the island remain in precious memories of Detroiters across generations.

As the summer winds down and the state moves into the next phase of reopening, the city of Detroit will use Belle Isle to hold a Spirit Drive in memoriam of Detroiters who have died from COVID-19.

The city has asked residents who have lost loved ones to submit photos and details online by July 31 to participate in the citywide memorial. The Aug. 31 Spirit Drive is not the first time the park will have served as a space for Detroiters to come together this year. Earlier this summer protesters held a peace march amid nationwide protests on police brutality.

The island has seen 400,000 more visitors so far this year than last and, in 2019, it welcomed 2.2 million people. Ron Olson, Chief of Parks and Recreation for the Michigan Department of Natural Resources has seen an increase in visitors every month since this March, even in May, when the Grand Prix was canceled due to the pandemic.

However, the state has restricted access to Belle Isle several times this summer. Olson said this happens after about 3,000 cars are on the island. This summer the park has seen upward of 9,000 to 10,000 people a day, excluding those who access the park by bike or walking. Olson said DNR staff are trying to handle the larger crowds but need more staff members. DNR posted job openings earlier this year, put the process on hold during quarantine, and is now hiring seasonal workers again.

“On a general note, we have experienced very large numbers of people coming to the park as we have other state parks,” Olson said. “But Belle Isle has been used a lot by people.”

Visitors are required to pay a $9 fee to access the park. The state offers a recreational passport which allows state residents access to any state park year-round for an annual $12 fee. The passport was suspended through mid-June due to the pandemic to allow more Michiganders access to open spaces during quarantine.

The City of Detroit still owns the property, but the island was leased to the state in 2014. Some Detroiters see state management of Belle Isle as a loss and a painful concession residents made during the city’s bankruptcy. David Alexander visited Belle Isle in late July to fish with his 4-year-old son. Alexander, a native Detroiter, said the state hasn’t done enough to restore and clean-up the park for city residents. Alexander said that if his personal property looked the way some structures on Belle Isle did, the city would have fined him by now.

Local historians say Belle Isle originally belonged to American Indians who used the land for hunting. When the area was colonized by the French it was used to keep livestock and became known as Hog Island. Several families owned the island until the City of Detroit took over the property in 1879. The city hired Frederick Law Olmstead, a renown landscape design architect at the time who was known for co-designing areas like Central Park in New York and the Biltmore Estate in North Carolina.

Joel Stone, a senior curator at the Detroit Historical Society, said Belle Isle has a “romanticized history”  through stories told about how it got its name to the design of the park. According to Stone, the island’s name change from Hog Island may have come from Detroit’s former “upper crust” boating society, who thought that the island was much too pretty to be named for hogs, and instead should be named after Lewis Cass’ daughter, Belle.

Although taken from American Indians at the hands of the French, Belle Isle became a welcoming place for all. Even though the island was the starting place of a two-day race rebellion in 1943, Stone said Detroit didn’t have the same segregation laws as other cities that prevented non-whites from public spaces.

“To my knowledge, and it may have varied from time to time, it was always a place where Blacks and whites went,” Stone said. “Since the 1920s, we have pictures of African Americans swimming on the island.”

The welcoming aspect is part of what keeps Kanoelani Garibaldi going back.

Garibaldi was with her family at Belle Isle on Friday. The mother of six was unpacking her car at the Butterfly Garden by the Nature Center as her children ran off to jump on the play structure. The 28-year-old said her family ventures to Belle Isle fairly often for family gatherings where her parents will fish and her children can play outside.

“It’s very family- and friend-oriented, very clean,” she said. “I love it. I love how clean it is, I love the mixture, you can come out here and be yourself and be comfortable, I love that.”

But just a few feet away from the play structure was a flooded street and blocked off walkways due to excessive water. There’s a rumor that Belle Isle has been sinking over the years, a rumor that Olson vehemently refuted.

Water levels for the Great Lakes and rivers are higher than they were last year, which is causing the flooding on Belle Isle. Certain roadways on the park are currently blocked but much of the east side of the island remains open for visitors. A cofferdam, an inflated tube that will block water out of an area, will be installed at Belle Isle in the coming weeks to prevent future flooding.

The extra water hasn’t scared visitors away. Belle Isle beach was packed in July, as families and friends sunbathed, grilled, and enjoyed the sunny warm weather, together.

Elizabeth Smith and Maya St. Louis sat on the beach giggling and talking to each other while enjoying a charcuterie board. The pair of 20-somethings said they were visiting Belle Isle to find happiness and spend time with good friends.

Farther down the beach was James Hughes who sat under a tree. The 47-year-old said he grew up on Detroit’s east side, but currently resides in Las Vegas. He’s been in-and-out of town the past few months due to deaths of family members during the pandemic. While he said nothing good brought him back to the city, he’s found joy, and is now considering moving back to Detroit after spending the majority of his free time at Belle Isle.

“I have rediscovered my city,” Hughes said. “This is where I come to relax.”