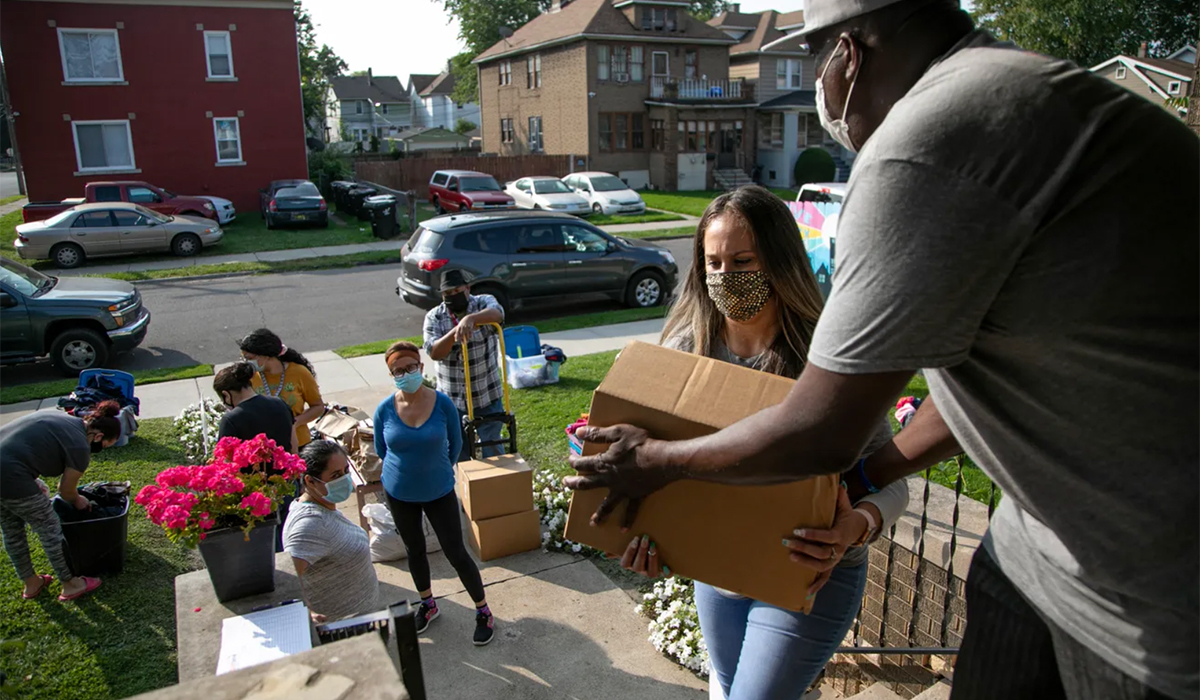 Tauna Sanderling wakes up at 5:45 a.m., prepares breakfast and gears up for a full day of virtual school for her two grandchildren, niece and nephew. She has transformed her Detroit living room into a classroom with the children in separate corners.

Sanderling, 52, is one of millions of parents and caretakers across the country adjusting to going back to school during the pandemic and the costs associated with it.

She recently spent about $500 on school supplies — learning books, flash cards and a chalkboard. It was an unexpected cost on top of paying utility bills and providing healthy meals. Sanderling, the primary provider for seven children, survives on just $1,200 a month.

It’s a tough burden to bear, but one she must shoulder, Sanderling said.

“I want to get in my closet and I want to cry,” she said. “I cannot show them that I’m giving up and I’m frustrated, but every day I am frustrated and I have to cry to God all the time. What can I do? Guide me, help me.”

As the new school year ramps up and the economic downturn of the COVID-19 pandemic continues, parents are having to make tough financial decisions. Nonprofits and social service agencies say they see families struggling to purchase materials for school, access child care and put food on the table. Experts worry that, without government intervention, long-term financial strain may widen opportunity gaps for children, and challenges to learning in the pandemic can exacerbate inequalities into the future.

Many Detroiters, like others across the state and the country, have felt the impact of the pandemic.

As of July 29, nearly a quarter of Detroiters were unemployed and nearly half said they couldn’t afford to buy more food, according to the University of Michigan’s Detroit Metro Area Communities Study, which surveyed 1,138 Detroiters online and over the phone.

Adjusting to school, especially during the pandemic, can add to the pressure families already face, especially for people who have lost work or are in low-paying jobs, said Kyle Smitley, who runs two charter elementary schools — Detroit Achievement Academy and Detroit Prep.

“Lots of families, generally in America, are one paycheck away from being in serious financial trouble … and school coming back is just turning up the heat to that,” she said.

Although the Detroit Public Schools Community District supplied thousands of students with laptops and internet connections, there is still a gap in access to technology for those in charter schools, Eggleton said. 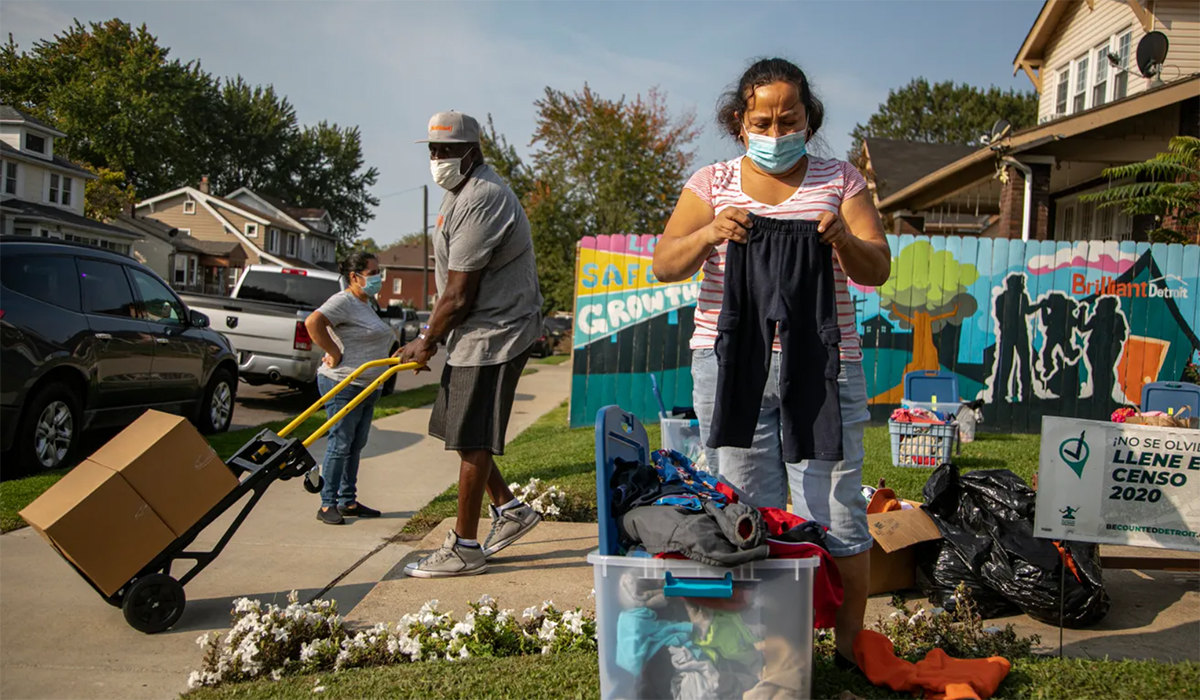 Vanita Sanders, director of education and community initiatives for United Way of Southeastern Michigan, said more funding is needed to “close that technology gap for students who are in charters or students who live in the city of Detroit but may attend school somewhere else.”

It’s hard to quantify the lack of technology for charter schools, but it does exist, said Buddy Moorehouse, spokesman for the Michigan Association of Public School Academies, a charter advocacy group. However, he said he has not yet heard of a charter school that has been unable to provide its students with devices. Schools are adjusting their budgets and individually fundraising for supplies. Some also used federal relief funds.

The City of Detroit in July announced a $1.4 million investment, from mortgage lender Rocket Mortgage to Connect 313, the city’s effort to ensure all Detroiters have digital access. Connect 313 launched in June to provide Detroiters with devices, internet, technical support and digital literacy. Nearly 30% of Detroit households don’t have internet access and 45% have no access to a computer, according to Connect 313.

“There were a lot of families that either didn’t have the resources or they weren’t ready for all the virtual learning,” Sanders said.

United Way of Southeastern Michigan plans to donate 3,000 backpacks to ninth graders in the Detroit Public Schools Community District and another 3,300 to sixth and ninth graders in some Detroit charters and southeast Michigan schools. Included in the backpacks are noise-canceling earbuds, whiteboards and markers to help students with virtual learning.

Another concern is child care, Sanders said. Health risks, work-from-home routines and the challenge of finding employees have rocked day cares across metro Detroit. And options for parents may become even more unpredictable as school districts decide whether they will hold in-person instruction.

Food insecurity is an ongoing challenge, too. Since March, Gleaners Community Food Bank has increased its food distribution within southeast Michigan by 40%, said Stacy Averill, vice president of community giving and public relations for Gleaners.

“There are new hardships that families are facing that they may never have had to face before,” Averill said. “As resources are strained, making sure that there is healthy food in the household could be a struggle as well.” 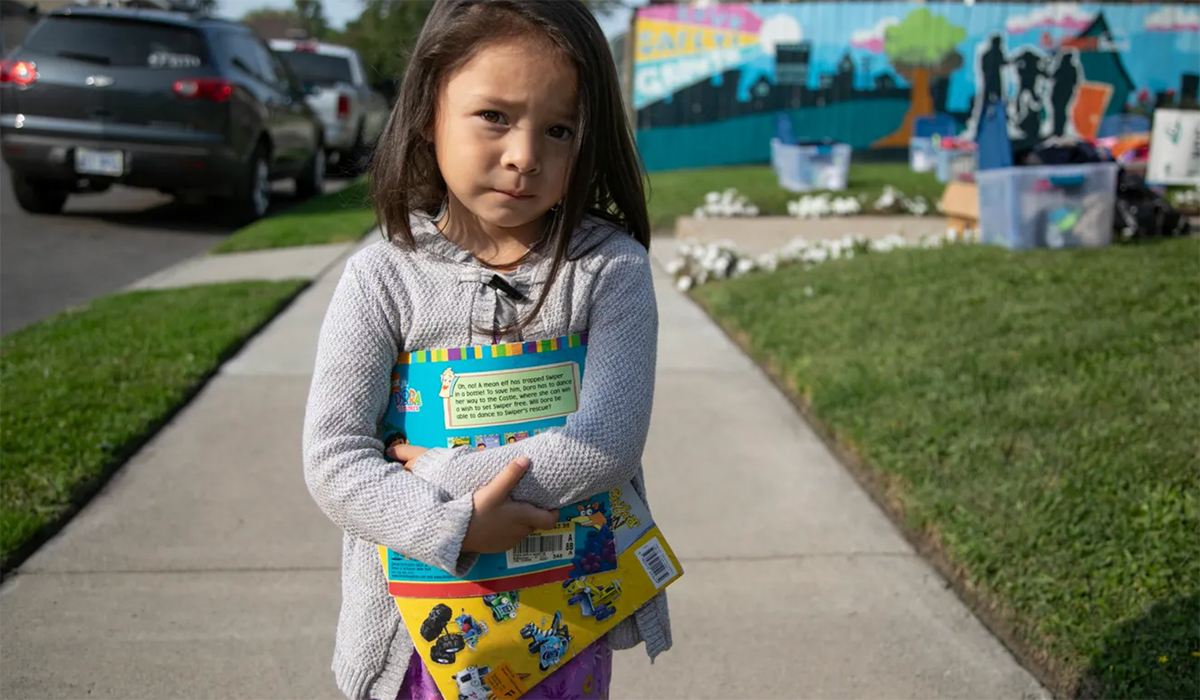 “We continue to average about 230 households for each of our drive-up mobile distribution sites,” Averill said

Gleaners plans to continue extra food distribution into the fall, knowing that families need help as they navigate the school year, she said.

Maria Dalton of Detroit understands this all too well.

Although she is able to provide meals for her kindergartner, feeding “a growing 5-year-old” is something she constantly worries about. She hears similar concerns from her friends.

“I don’t think I realized how much having those two meals a day mattered until now,” she said of the meals students would typically receive in school. “I don’t think any of us realized that,” said Dalton, 40, who has to work a weekend job at a grocery store in addition to her-full time job.

For families who don’t have transportation like she does, it may be impossible to get food from schools, churches or food banks, she said.

Still, amid these financial worries, Dalton is a dedicated mom trying to “maintain some form of normalcy for my child,” she said.

The extra $600 in weekly federal unemployment aid helped families stay afloat, according to experts. Without it, many are struggling.

Theresa Mitchell, 38, says the $362 in weekly unemployment benefits she receives is barely enough, as she helps her two children who are in kindergarten and first grade attend school virtually. Mitchell lost her job at a local nonprofit in February. 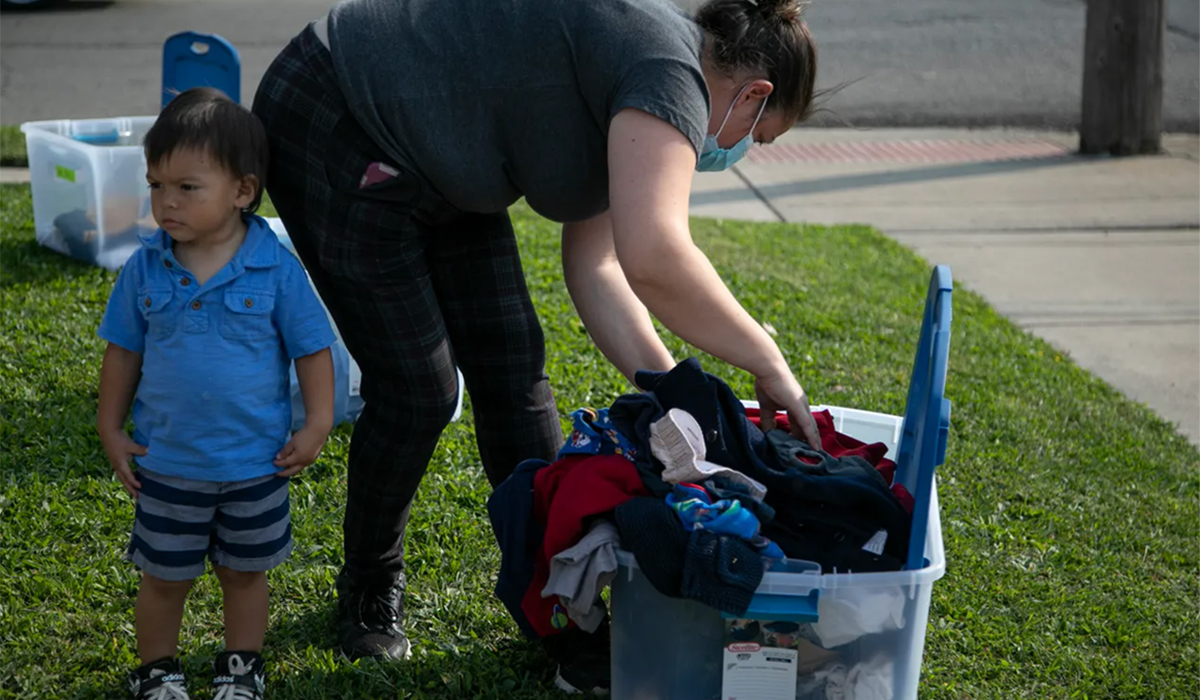 Emilliano Torres (2) waits for his mom while she looks for clothing at one of the houses operated by Brilliant Detroit (Mandi Wright, Detroit Free Press)

“Going from more than just shy of $4,000 a month to just barely $800 [bi-weekly] — that’s a drastic decrease in income for us,” Mitchell, who lives in Detroit, said. “Where we were already budgeting, we really have to budget now. And it’s important to me that my kids don’t notice a difference.”

Mitchell spent an unexpected $300 on supplies — a table and additional technology. That’s on top of utility and grocery bills.

“It’s a hard pill to swallow, but definitely one that has to be done,” she said.

With benefits rolling back, people are now struggling to make ends meet and stay in their homes, said Matthew Diemer, a developmental psychologist and professor of education at the University of Michigan.

“I think a lot of us are concerned about what the fall and winter might bring,” he said. Social supports at the state and local level helped, he said.

But the pandemic could widen what researchers refer to as opportunity gaps — the often wide differences in resources and educational opportunities that exist between students such as those from low-income families and those from wealthier families. For example, most students from low-income families weren’t able to afford learning alternatives such as private tutors that were readily available to their higher-income peers during the spring and summer when school buildings were closed.

William Elliott, professor of social work at the University of Michigan, said American families need long-term solutions. He recommends “federal interventions” for the next couple years, like mortgage forgiveness and rent relief coupled with policies to build wealth.

“It’s not enough simply to have income to live day to day,” he said. “They also need specific policies that help them build assets in their homes, help them to invest in the stock market.”

Elliott said people have found themselves relying on family networks for financial help, living in combined housing areas and going to food banks, but this is temporary, he said.

“How do we continue to make a semblance of the American Dream and not allow this to be a moment in which inequality — which is already quite large — (will) be further exacerbated by both educational losses and wealth losses and income losses?”

How to get help

For emergency food assistance, call 211 or Michigan’s statewide toll-free number: 844-875-9211. If your children are part of the National School Lunch and Breakfast programs, distributors can be found below. Find a food pantry near you by (call ahead for hours of operation and eligibility requirements):