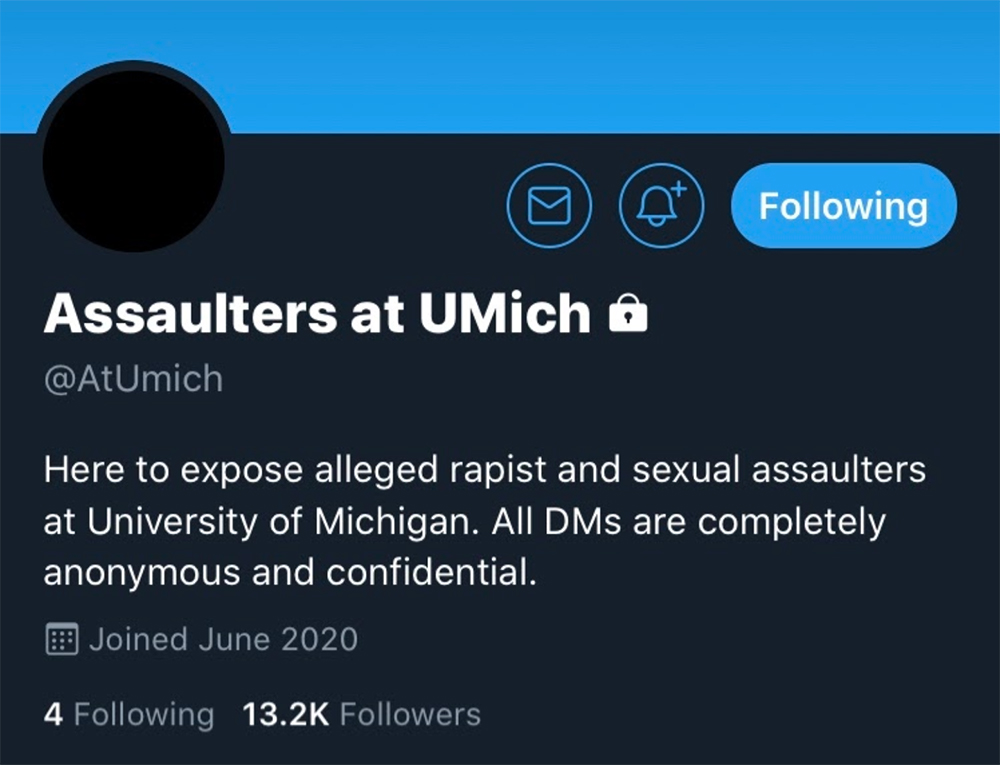 Note: On June 26, after this article was published, Detroit Free Press reporter Branden Hunter resigned from his position as a neighborhood reporter. In a private Twitter message that was shared online, Hunter wrote: “Years ago, I exercised horrible judgement by communicating with younger girls in high school.”

A crowd of 15 to 20 women stood outside the doors of the Detroit Free Press demanding a reporter be fired this past Monday. With a single megaphone, the group took turns reading a list of demands, poems, and explanations of why the reporter should lose his job over allegations of sexual harassment.

The reporter in question had been accused of sending inappropriate text messages to high school students within Detroit Public Schools Community District while covering high school athletics at the Michigan Chronicle. 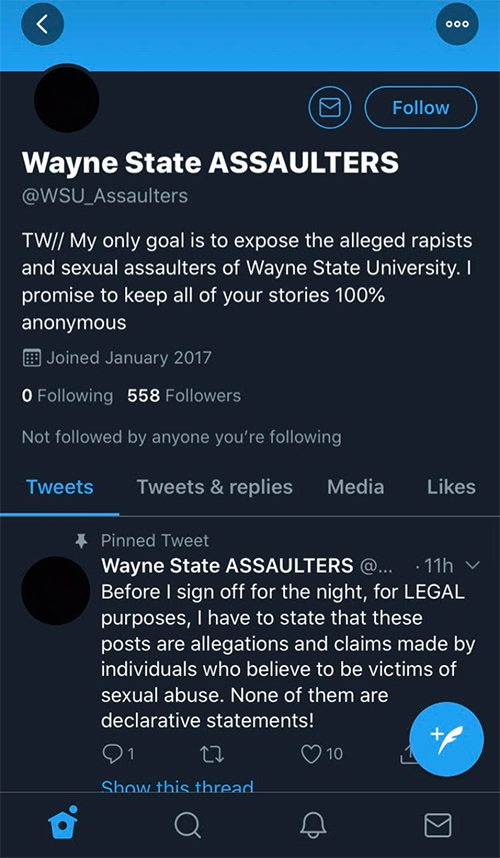 Most of the anonymous Twitter pages are college or university specific, like Wayne State Assaulters, AssaultersUMich or Justice4MSU, and include schools in other states. However, some cities have seen anonymous accounts pop up, including a Detroit Assaulters page that was quickly deleted. The survivors send their stories in a direct message to the page and the account authorizer will make a public post about the incident, sometimes including photos, full names of the accused, and screenshots of text messages.

The social media platform has become a digital storytelling space, uplifting voices that have not always been highlighted or listened to by traditional media. Most of the anonymous pages were created in June 2020, however the Wayne State Assaulters page says it was founded in January 2017. Earlier this month, the page was public, but now Twitter users must submit a request to follow.

Twitter has been influential in sharing stories relating to police brutality and police-involved shootings of Black people, including events that led up to this year’s protests. The platform allowed community members to share photos, video, and personal accounts of events in Ferguson, Missouri, when Michael Brown was shot and killed in 2014.

For weeks, Detroit’s online community has debated the accounts, either questioning their legitimacy, thanking and encouraging more survivors to come forward, or doubting accusations against men in the community who had been seen as upstanding, but who have now been “canceled.”

Cancel culture, or being “canceled,” typically means the general public is no longer supportive of, or paying attention to, whomever or whatever has been accused of wrongdoing.

Victoria Clark, a teacher for Detroit Public Schools Community District and the organizer of Monday’s protest outside the Free Press’ offices, said that she is “always advocating for young children all the time,” so she felt compelled to do something about the accusations.

“He’s such a figure in Detroit,” Clark said of Branden Hunter, the Free Press reporter at the center of Monday’s protest. “Everybody looked up to him.” 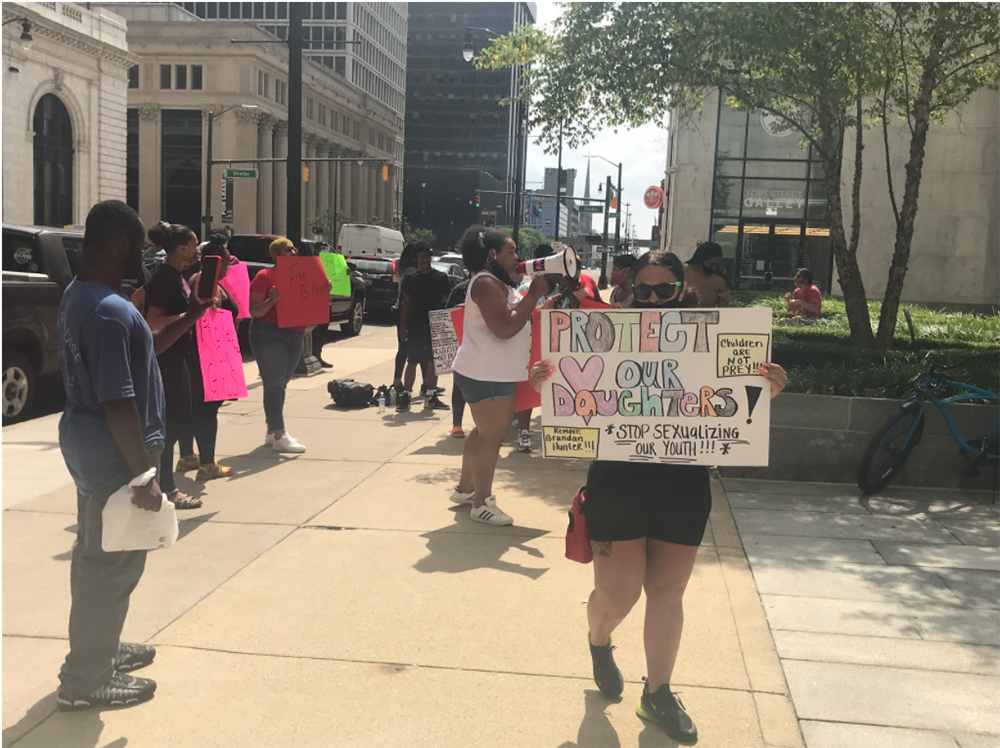 A group of protesters stood outside the Detroit Free Press on Monday, June 22, demanding that a reporter accused of sexual harassment be fired. (Photo by Olivia Lewis.)

Clark said since the accusations surfaced, Hunter, whom she says she knows personally, has blocked her on social media.

The Detroit Free Press Editor and Vice President Peter Bhatia responded via email and said the publication is investigating the matter and will take appropriate actions based on the results of the investigation.

Most of the stories being shared involve severe sexual abuse on college campuses, including taking clothes off inebriated individuals, verbal abuse to force a sexual encounter, and non-consensual sex. Some of the accounts include documents from university-led investigations from as recent as the 2018-2019 school year.

Kristen Howard, chief of staff for DPSCD, said the district has received at least one complaint involving Hunter and a former student. Though there is no active investigation at this time, the complaint is under review. Howard said the district will look for two things: whether the situation happened on DPSCD property and whether there is an opportunity for recurrence.

Howard said district employees are mandatory reporters, meaning that if they suspect any type of abuse is happening involving a student, they are required to report the information. The district’s Office of the Chief of Staff oversees three departments: Equity Advocacy and Civil Rights, Government and Community Affairs, and Employee Relations, all of which may be involved in reviewing complaints. Anyone who feels threatened at a DPSCD campus, including visitors, can file a complaint through mail, email, call, or fax.

“We’re very available,” Howard said. “We do our absolute best to protect the privacy of our victims.”

Messages left for Hunter by BridgeDetroit were not returned. However, Hunter addressed the allegations in a June 3 Twitter thread:

“In light of what’s been brought to my attention, I want to address this from my own mouth. There have been some accusations brought to my attention mentioning my name that are not in alignment with my values and character. I want to be real when I say this, I respect and stand with anyone who has ever experienced disrespect, fear or assault in their lifetime. I hold respect to the women who have birthed me, raised me, supported me and interacted with me.” 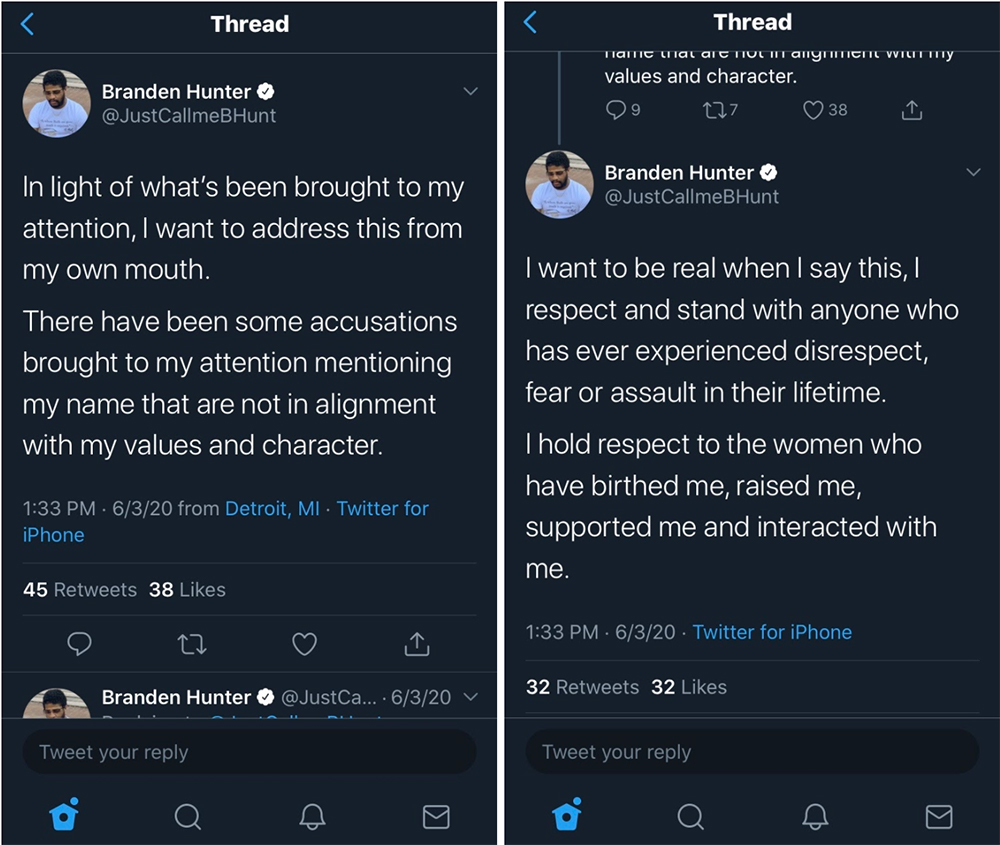 In the interest of disclosure, the Detroit Free Press is one of BridgeDetroit’s partner organizations, and Bridge Detroit’s project executive was also terminated from the Free Press in 2017 for sexual harassment allegations inconsistent with company values and standards.

Not everyone is a fan of the anonymous pages, even those who haven’t been accused.

A student group called College Republicans at the University of Michigan shared a press release on Twitter asking the owners of the @AtUmich account to delete its page, citing the problems of “vigilante justice.”

In an e-mail to BridgeDetroit, the group’s Ryan Fisher acknowledged the trauma that sexual assault survivors may face and said anyone committing such acts are “evil and should be punished severely.” But Fisher called  the anonymous pages dangerous, and said that they should be taken down for the “decency and regard for the survivors and the wrongly accused.” 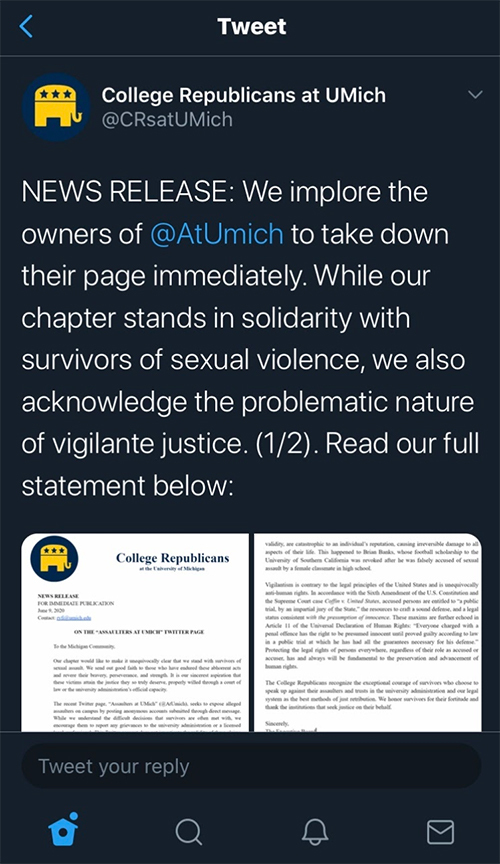 “People whose names are posted to this unofficial registry will surely be ostracized and attacked, some righteously and others not. Right now, any of us could send a direct message to the page admins with a name, and that would be sufficient to destroy someone’s life,” Fisher said.

Tweets from several of the anonymous pages admit to receiving backlash from those who have been accused. Some pages have created disclaimers on how to share information and warning of potential repercussions if a falsified story is submitted.

Even though Twitter allows sharing of information, it’s unclear whether there is a chance of a libel defamation suit for either the accused or the survivor.

Leonard Niehoff, a professor at the University of Michigan Law School, said libel law is hard to win. They are expensive and typically pursued by “high-profile individuals and others (with) lots of resources.”

“Throughout history, libel cases have been brought to try to silence critics, muffle dissent, and chill legitimate expression,” said Niehoff, an expert in media law, the First Amendment, higher education law, and civil procedure and evidence.

According to the professor, Twitter has become a “democratizing force in the history of free speech” by giving voice to suppressed groups.

“Tragically, women who have bravely come forward with these sorts of accusations have sometimes found themselves relentlessly targeted online,” Niehoff said.

Adding that more survivors have begun to bring libel cases forward after their abusers said they lied about accusations Niehoff added:

“It is obviously very important that sexual assaults are reported and that we do everything we can to encourage such reporting,” Niehoff said. “And we know that these crimes are significantly under-reported. Reasonable people can disagree about whether this sort of social media approach is a fair and effective solution to those problems.” 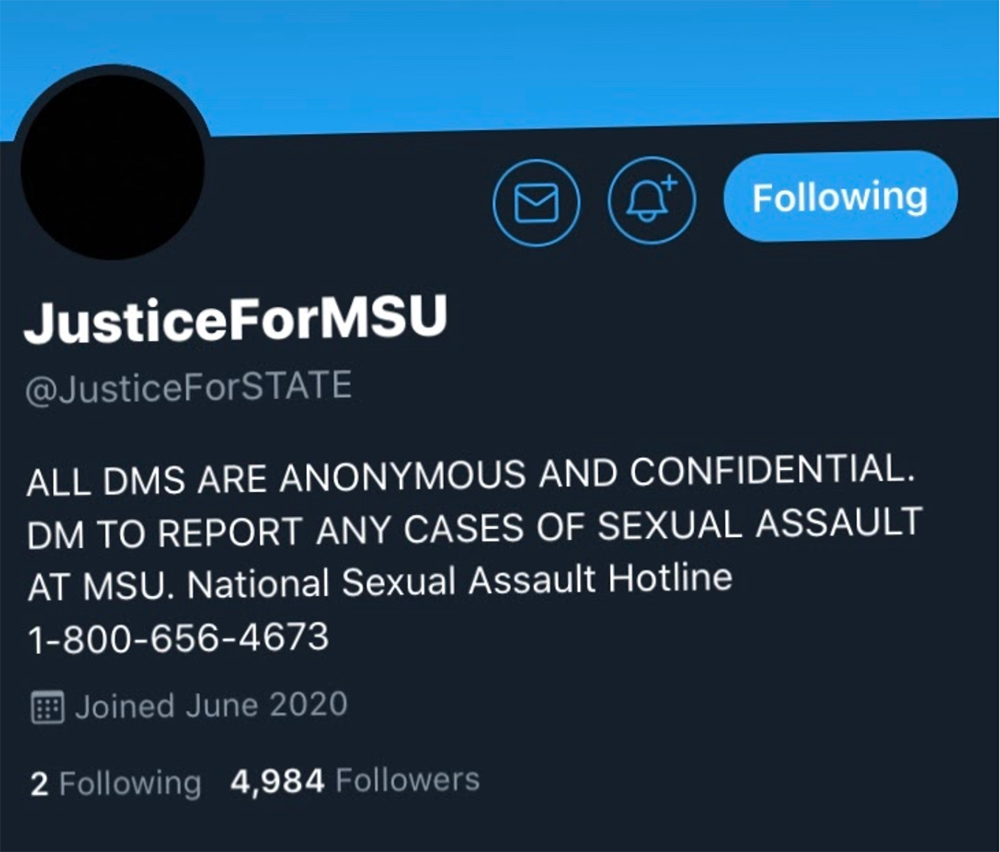 Jessie Urban is the youth and legal program director at La Vida, a community program at Community Health and Social Services Center, a federally qualified health center in southwest Detroit. She works with young people ages 5 to 24 who have been exposed to a crime.

Urban works with La Vida’s youth board to create peer-advocacy training, prevention and community capacity-building programs. She also works with two DPSCD schools in addition to Caesar Chavez Middle and High Schools and Covenant House Academy Southwest in Detroit. Most of the students she encounters are LatinX and/or members of the LGBTQ+ community.

Since January, Urban has seen 101 reports of abuse.

If you or someone you know is in need of help regarding abuse, these resources are here to help:

Urban said figuring out the proper way to tell stories of abuse is complicated. Urban said it is important for survivors to speak out, but traditional channels to do so are challenging and detrimental.

“It’s very, very difficult to have enough evidence to be charged with sexual assault and very difficult to be cross-examined on the witness stand,” she said. “The criminal justice process takes a lot, and a lot of survivors are not in a place where they can do that.”

Recognizing the triggering aspects of survivors sharing their stories, Urban said she hopes that those behind the anonymous Twitter accounts will emphasize going to experts to seek help and utilizing local resources who will also keep stories confidential.

“There are different channels to resources that can help people make their own decision,” Urban said. “I want people to be as safe as possible, that will help their own path to healing. We’ll support survivors any way we can.”