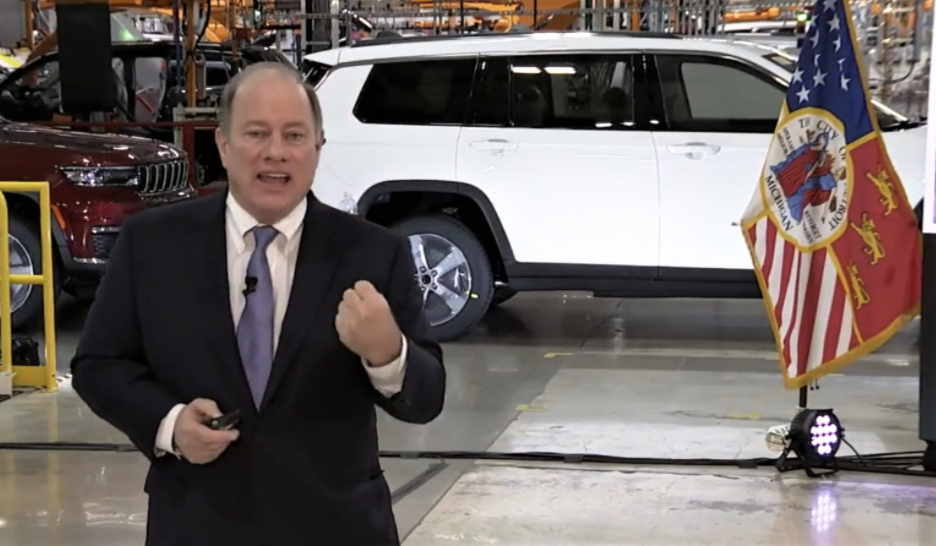 Mayor Mike Duggan during the State of City address. (City of Detroit photo)

Amid the shiny new $1.6  billion Jeep plant on the Eastside, Mayor Mike Duggan delivered his annual State of the City address Tuesday night. A better title would be State of the Mayor.

And it’s an election year. So, the State of the City looks shiny and upward-bound based on the address by the mayor, who is running for a third term this year.

Every year, Duggan uses the event to tell a compelling narrative of a rebounding Detroit. He’s  good at it — emphasizing the broad coalition of businesses, community, and philanthropic leaders who support him.

He commands the stage alone. This year, it was the factory floor of the Eastside Jeep plant. There are inspirational pre-recorded videos about Detroiters cued up, driving home the emotional impacts of his policies. He speaks in a comfortable, commanding tone of a “Ted Talk.”  It’s this sense of leadership and vision that has helped Duggan win two terms as mayor. That includes a landslide victory in 2017, when he won 71 percent of the vote.

The thing to think about is what he doesn’t mention. He’s trying to find political solutions to complex issues. There are often epic battles, and sometimes federal investigations, over any policy.

Here are some reality checks on Duggan’s address.

Duggan side-stepped the entire issue during his two-hour address. Black Lives Matter is considered one of the largest social movements to emerge in decades, amplifying calls for police reform and fighting systemic racism in virtually every aspect of public life. Detroit’s population is more than 80 percent Black.

The mayor highlighted efforts to boost Black businesses, job training and expunging criminal records. He acknowledged institutional racism. He did not mention the BLM movement. Nor did he introduce any new police reform initiatives.

His silence may be due to ongoing legal action between the City and members of Detroit Will Breathe, the group behind many of last year’s street marches.

In November, Duggan’s administration filed a countersuit against members of Detroit Will Breathe, just days after demonstrators won a restraining order against Detroit police officers.

The City suit alleges the marchers organized a “civil conspiracy” and defamed law enforcement and City officials in hopes of inciting violence.

One day after Duggan’s address, the City’s countersuit against Detroit Will Breathe was dismissed by a federal judge, who concluded demonstrators didn’t conspire to cause civil unrest or attack police.

The mayor touted residential property values in Detroit have grown by more than $1 billion in combined worth since 2019, with virtually every neighborhood seeing gains. More than 10,500 Detroiters have received property tax exemptions this year based on their income, City officials said.

He failed to mention that many Detroiters are demanding the City compensate more than 63,000 homeowners who overpaid a total of at least $600 million in property taxes.

Detroit completed a state-ordered reappraisal of all residential property in 2017 to correct its overassessment problem. But Duggan hasn’t found a way to make amends to the homeowners who were overtaxed between 2008 and 2016.

City Council recently rejected a Duggan administration resolution to give overtaxed residents priority in affordable housing, home-buying discounts and job opportunities. Duggan has said the City can’t afford to repay the overtaxed homeowners. He also has argued a massive repayment wouldn’t be allowed under State law.

It took Duggan nearly 15 minutes before he mentioned a specific neighborhood development program — the revamping of seven commercial corridors. It wasn’t until 90 minutes into his address that he listed off a number of initiatives aimed at improving neighborhoods — cleaning alleys, opening and cleaning up parks, the installation of speed humps, the selling of empty side lots to nearby homeowners.

He spent far more time celebrating the major developments that have come to the City during his administration. The new Jeep plant on the Eastside is the first auto assembly plant to be built in the city in 30 years. He touted the new Amazon warehouse slated for the former State Fairgrounds.  Bedrock’s Hudson site plans downtown. His relationship with the billionaire owners of the Ambassador Bridge, who own plenty of unused Detroit land.

Each of those developments come with fierce debates about whether Duggan has favored major developers at the expense of neighborhoods. Many Detroiters site neighborhood development as their top priority. The City recently asked 1,000 residents to list their top five issues they want to see the Detroit government improve. Four of the five issues dealt with more neighborhood improvements and community outreach.

And BridgeDetroit’s Community Priorities Model, which is our effort to measure Detroiters’ top issues, shows neighborhood development issues are the top concern, by far, of most residents.

Detroit’s election cycle for mayor and City Council is underway. The primary is in August, and the general election is November.