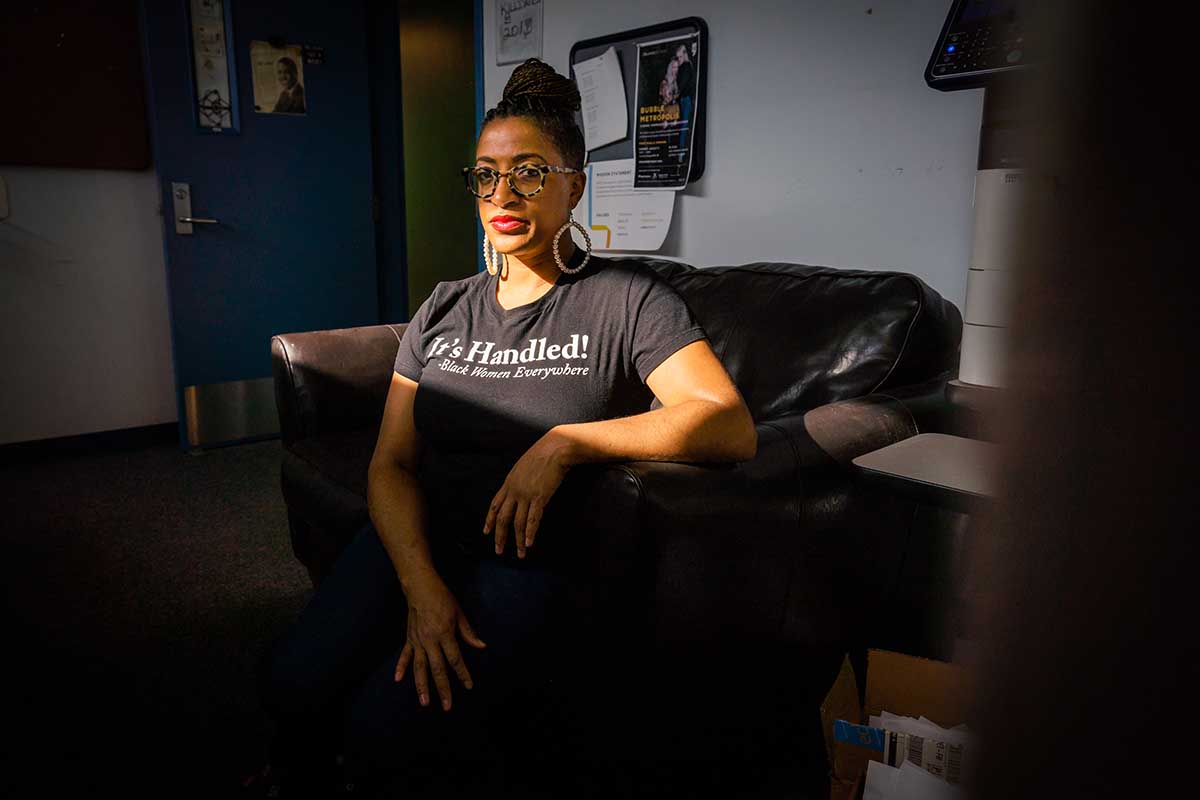 On day three of ballot processing in Detroit, a mob of GOP members showed up to challenge the count at the TCF Center. However, they were stopped by Sommer Woods, whose job was to ensure every person involved in the counting process was in the correct place: even if it meant outside the building.

Republicans and Democrats were each allowed 134 ballot challengers inside to monitor and challenge the vote count, according to the ACLU of Michigan. As Trump’s lead in Michigan dwindled Wednesday morning, Republicans called in reinforcements to storm the building where capacity was limited due to COVID restrictions. The crowd banged on windows and screamed for the count to be stopped, forcing a protest outside the locked building. But the counters inside, most of them Black women, according to Woods, continued their meticulous work, while she stood at the door until every vote was accurately counted.

BridgeDetroit interviewed Woods about her experience working at the polls.

This interview has been edited for brevity and clarity.

BridgeDetroit: What was your role at TCF?

Woods: My role in the voting process at TCF was essentially to be a part of the logistics: that the workers were able to get to their location and were able to work. This was my first time in the process of poll counting, any of it, and I keep telling people I am forever changed. I’ve volunteered on campaigns before and I’ve gone to the polls but never on the side of processing for the Department of Elections.

Inside Detroit’s election: Black women’s stories of the count and the mayhem
Post-election, Detroit braces for legal challenges to its results
Detroit may see highest voter turnout in ‘20 to 30 years’
What happened when conservatives tried to halt Detroit’s election count

BridgeDetroit: Can you talk about the dynamics of being a Black woman working at the polls in Detroit amid so many white conservative activists who were challenging the process?

Woods: This experience has forever changed me and from this I will always make sure that I have some role in it. Primary, general, local, national elections … we have to be a part of the process.

It was interesting. I actually had to interact with a lot of the challengers.

[Challengers] have a role and a place. You gotta have the balance of people to look at the process to make sure the process is balanced and I’m not mad at that. The problem that I had was the intimidation. The bullying, the demeaning words, the banging on the windows, telling me I’m stupid and that I don’t know what I’m talking about or even saying that to the workers. Totally violating the rules of the process.

So, I’m not mad at challengers and what they have to be but honestly, being a part of it, I had mixed emotions. There were a lot of tears. I cried a lot.

Basically there was a mob of white people at the door that were trying to intimidate this room full of Black people who were trying to uphold their rights, and it was the [workers’] rights that were being violated.

[You have to put this in] historical context as it relates to intimidation, and violence, and yelling and how all of that relates to 2020. So, it was very frustrating but very, very rewarding to be a part of the process and to be there for people.

BridgeDetroit: Was there ever a point where you felt threatened by the challengers who were there?

Woods: The funny part is I kicked it into gear and I did what needed to be done. I didn’t really think about the repercussions. Because all that was on my mind was: This ain’t right.

I never was afraid, I was extremely pissed off. I think the dynamic of being frustrated and pissed off is what drove me to make sure that we were doing what needed to be done. That was the driving force but I was never scared.

BridgeDetroit: What was going on in your mind as all of this was happening?

Woods: It was emotional, I was triggered and trying to maintain. The whole day I was trying to stay one step ahead of what the challengers were going to do. One step ahead from a safety and security perspective, we knew lawsuits would be filed…we wanted to make sure we had all of our guidelines and parameters in place. It’s so interesting how history repeats itself. This is what intimidation looks when you have a physical presence. Oppression of the vote and the people. They’re still using the same oppression tactics from the 1960s.

It is amazing to me that people are so surprised at what happened in our state. It was so beautiful to see so many different Black people, Black women and Detroiters stepping up to be challengers to be inspectors to be supervisors, just stepping up to protect democracy.

BridgeDetroit: What made you want to participate this year in this election?

Woods: The interesting thing is we gotta do some things to make changes in the city. We’ve got some problems. And so the last go-round we had the primaries and that didn’t go too well. I can’t complain because I wasn’t a part of the process, right. I wanted to be a part of the solution versus a complainer. So I signed up to work the polls to be a poll worker. And then Daniel Baxter who works over at the Department of Elections reached out and said: ‘Hey, you know we need some assistance with some logistics, do you mind?’ I felt that was a way for me to use my gifts and talents to be able to participate. I’m glad I did it. I do a lot of things on the ground, I’ve been a part of the community. Like Black people, I’m there. I’m all about uplifting Black people, I’m a very active mentor and very active within the space of community building.

BridgeDetroit: What did it mean to have so many Black women who were there, who are from Detroit, live in Detroit, who were working at the polls and counting all these ballots in such an unprecedented election? What were you thinking about when you realized Black women had such a big part in this?

Woods: There’s a couple of things. One, I love this shirt that I have that says “It’s handled — Black Women.” Seeing so many different Black women age-range wise definitely gave you a sense of pride but also of who serves as challengers. That was one of the things that was very beautiful to see. You have people who are counting the ballots and doing the work [but] can’t interact with the challengers. So if there was an opposition challenger or a Republican challenger that was coming in there to advocate, that worker is not supposed to interact with the challenger. They are supposed to talk to the supervisor or another challenger. The beautiful thing was the Black women who showed up as challengers to protect the Black women that were working. There was a sense of peace.

She was the best challenger of the day because she would go around to tables where she thought they were doing something that wasn’t right and she would send a message. “There’s someone being loud at briefing table 34, you need to come over here and handle it.”

You didn’t see anybody else rolling those big ass suitcases with food and snacks. I know what it’s like to work all day and I gotta prepare to count these votes. It was that sense of preparedness, that sense of Black women just having to do it. We’re going to get it done but we’re also going to be fueled and energized and everybody around me is going to eat. I loved it. Those sisters were doing their thing, fasho.

BridgeDetroit: There were several shifts throughout the week. Some stayed there all day and some for multiple shifts. How did the challengers react over the days?

Woods: Tuesday it was all good. People were cordial and we had some situations but not a lot of situations. On Monday they were just prepping and doing what they needed to get done. Monday it was fine because it was part of the process. But Wednesday was a whole different energy. [GOP challengers]  literally came in that day knowing they had to be disruptive and that’s what they did. That’s literally what the GOP did. It was not like that Monday and Tuesday. But Wednesday they activated, they had a plan and the plan happened. And then to see the sisters come in with such grace, it was great.

9 thoughts on “A mob tried to stop Detroit’s vote count. She made sure democracy prevailed.”