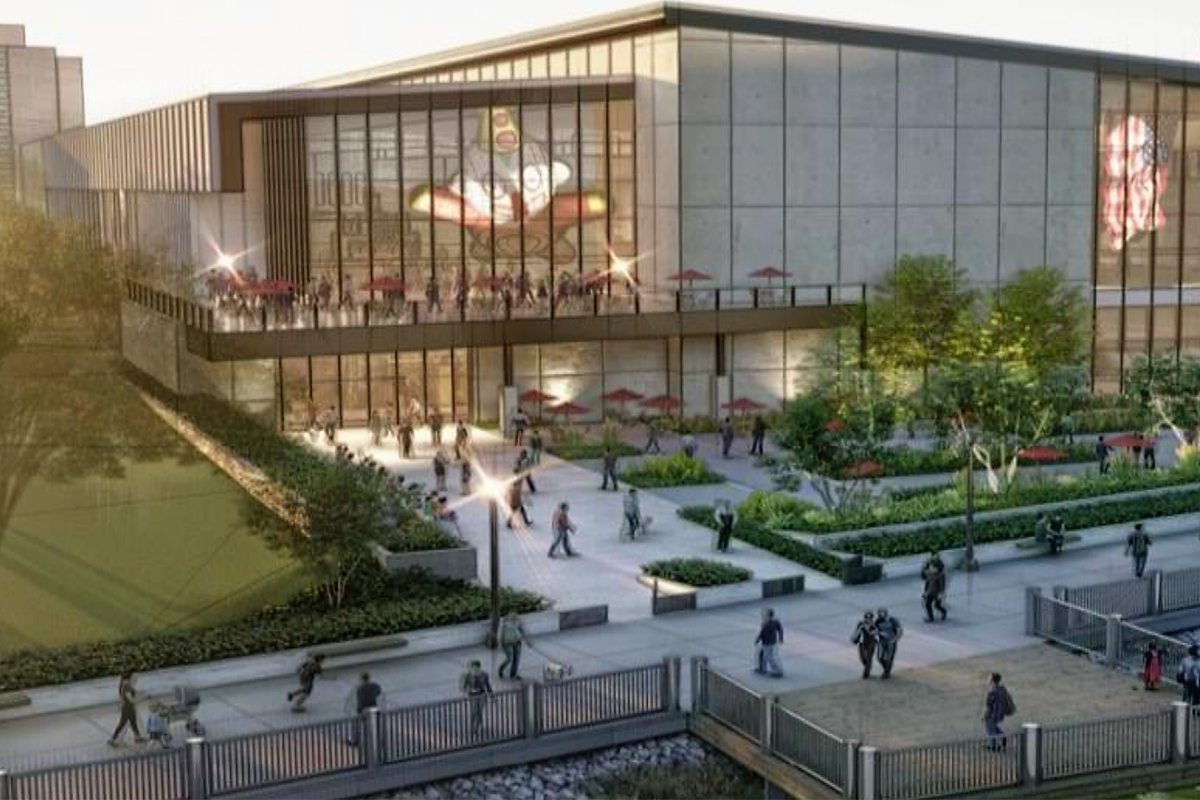 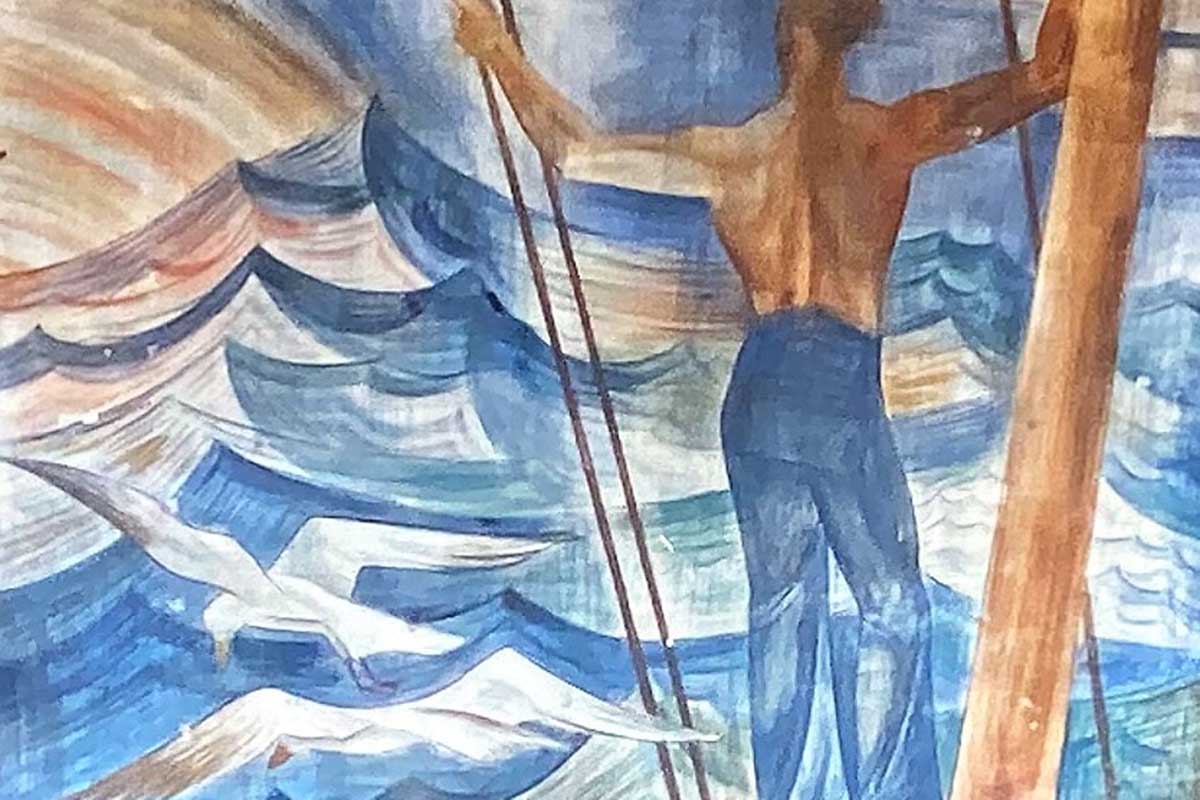 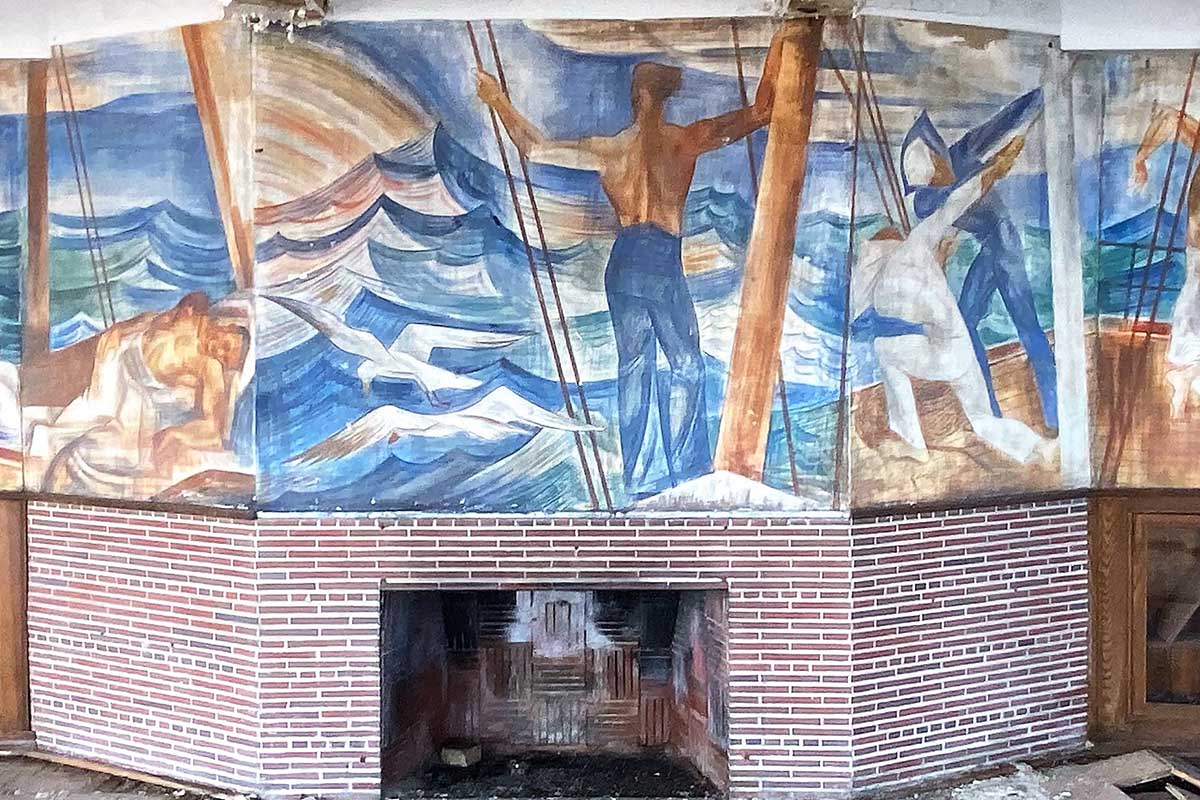 Part of the nautical-themed murals, this one painted by David Fredenthal, inside the former Brodhead Naval Armory, 7600 E. Jefferson Ave. (Photo by Dan Austin, HistoricDetroit.org) 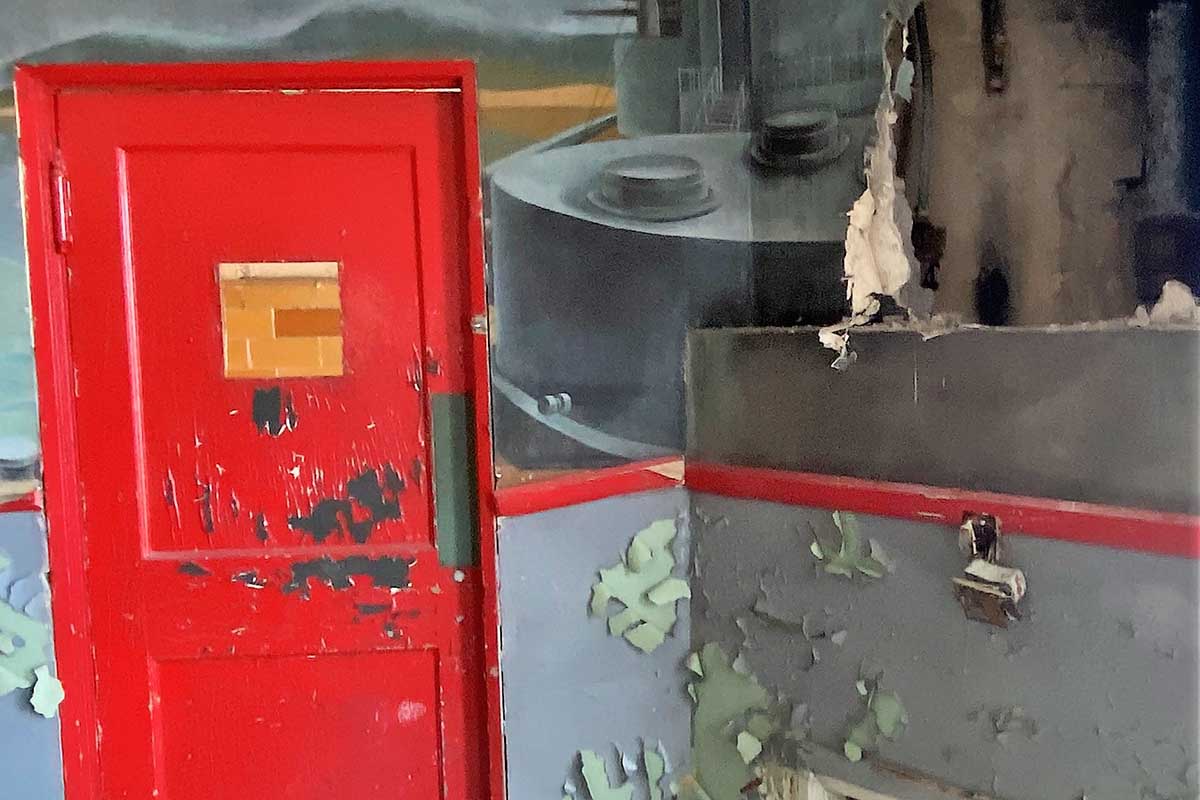 The Parade Co. plans to raze this room with the nautical-themed mural inside the former Brodhead Naval Armory to make way for a two-story new addition of the building. (Photo by Dan Austin, HistoricDetroit.org) 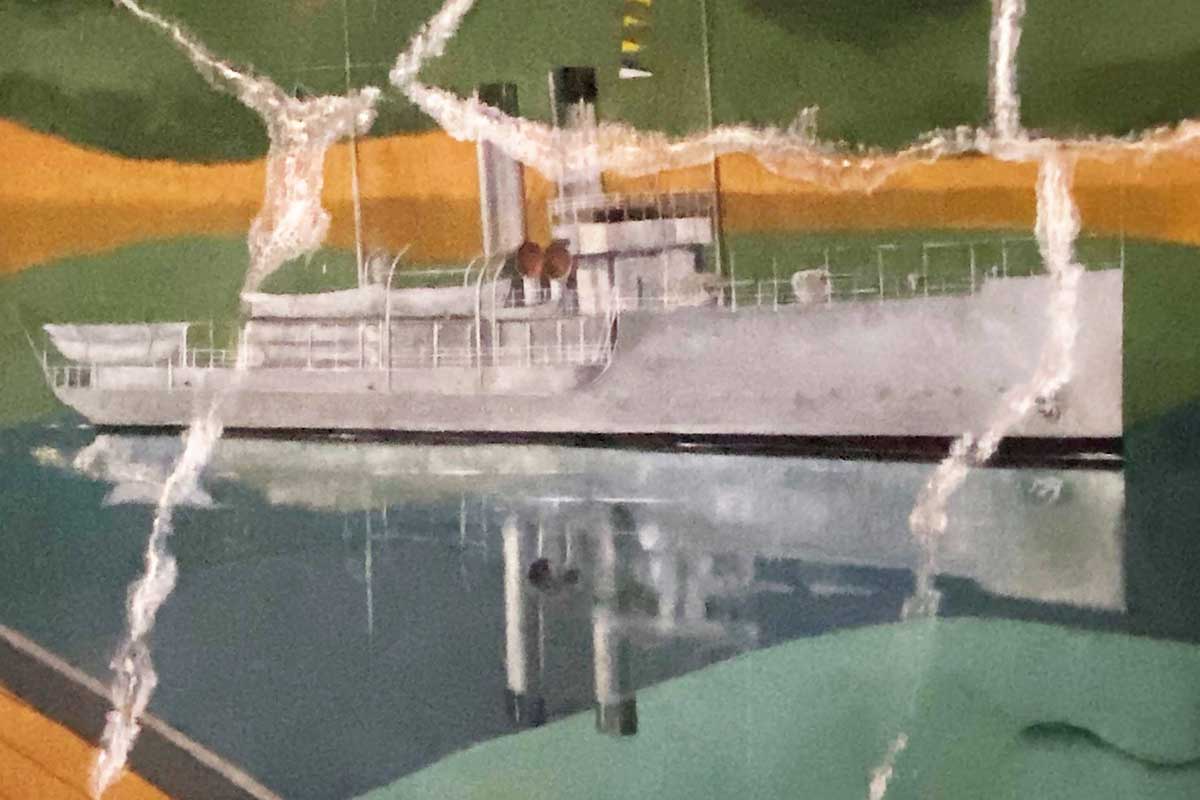 The Parade Co. vows to find way to “salvage” the nautical-themed murals, including these by artist Edgar Yaeger, but some preservationists are skeptical. (Photo by Dan Austin, HistoricDetroit.org) 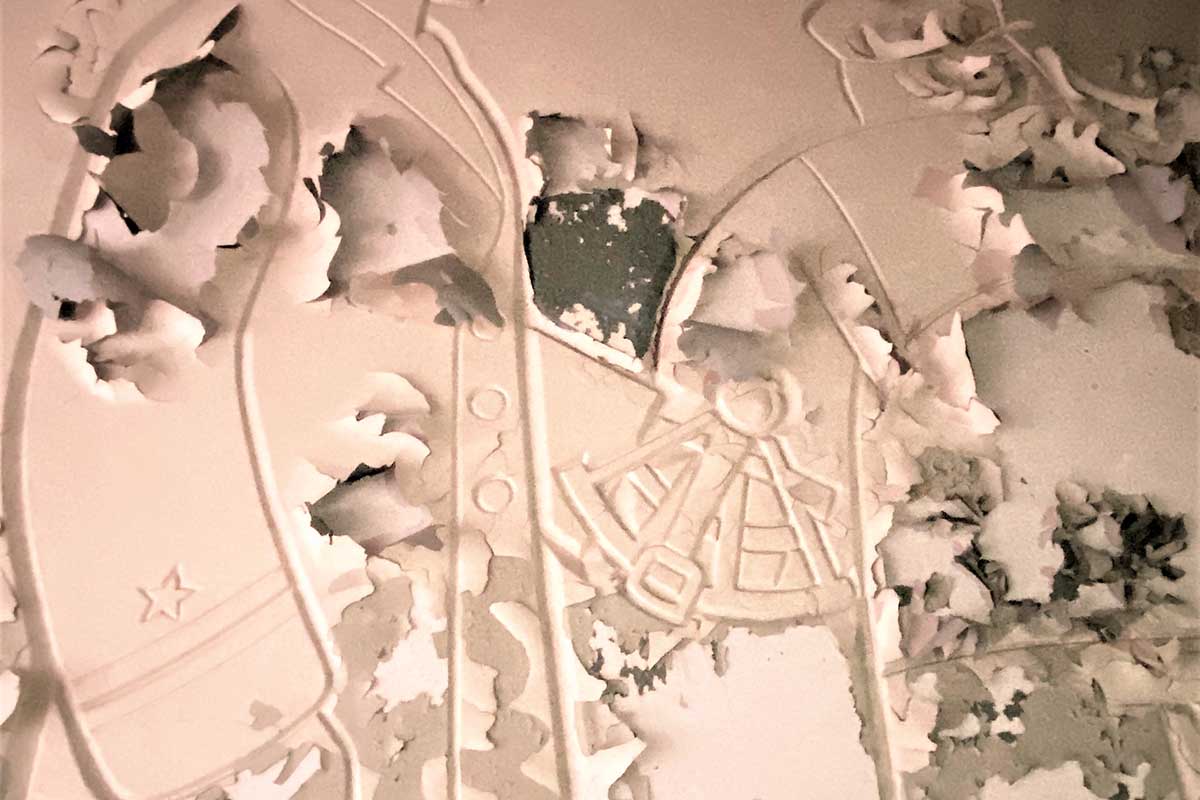 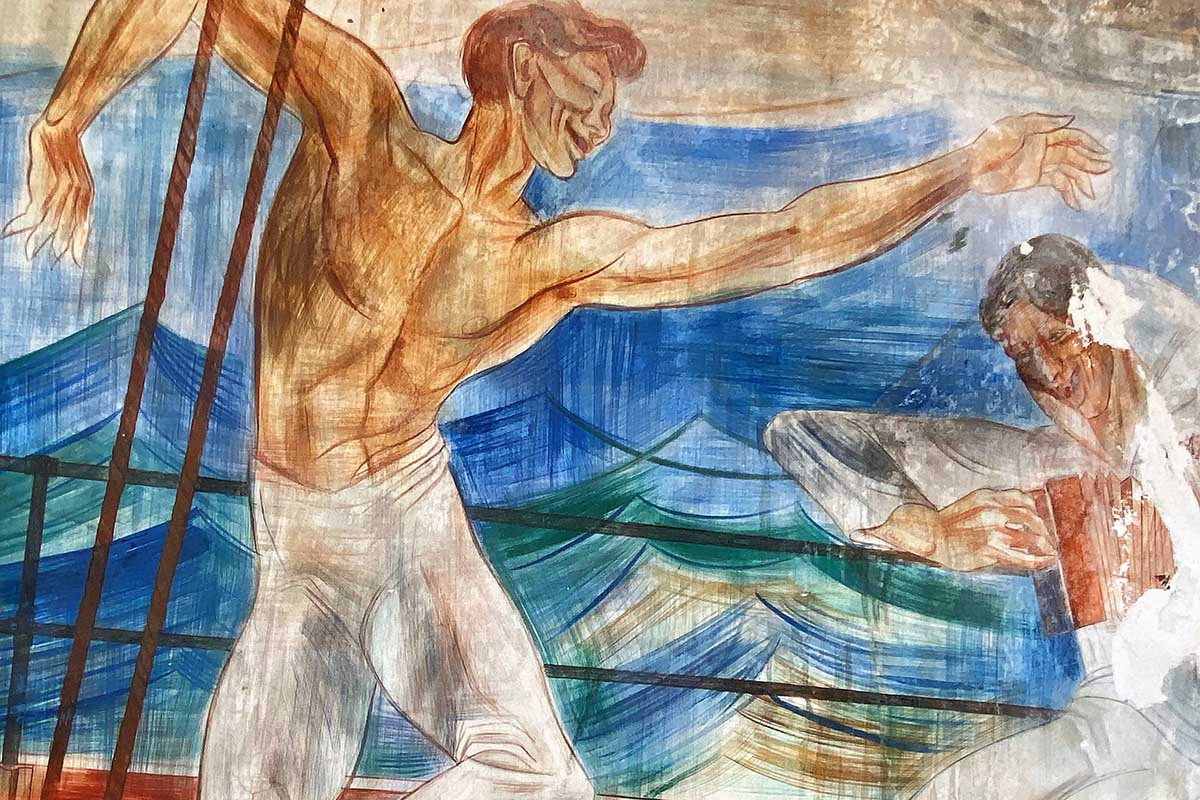 Artwork inside the former Brodhead Naval Armory is from the “WPA-era,” referring to a federal program during the Great Depression that championed American artists who produced work in public buildings. This three-panel mural is by renowned artist David Fredenthal. (Photo by Dan Austin, HistoricDetroit.org) 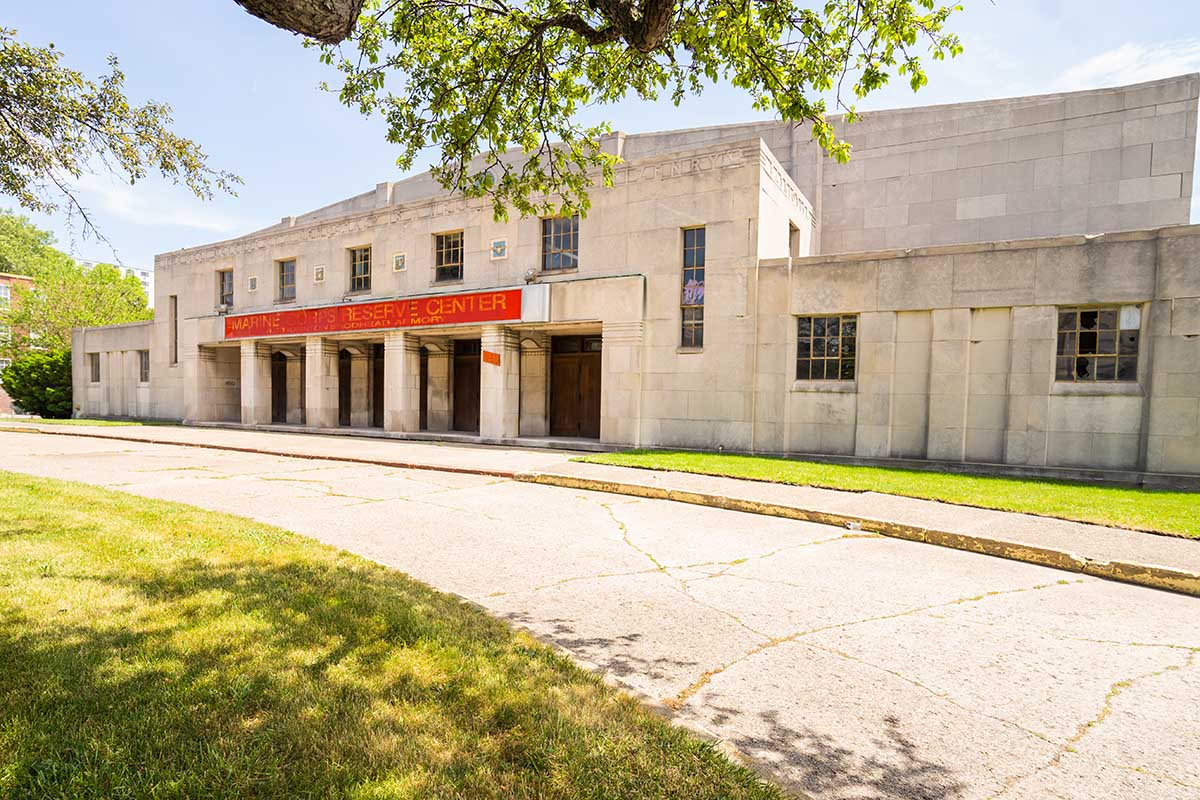 The current front of the Brodhead Naval Armory near the riverfront, just east of MacArthur Bridge that leads to Belle Isle. (Photo by Valuarian Waller) 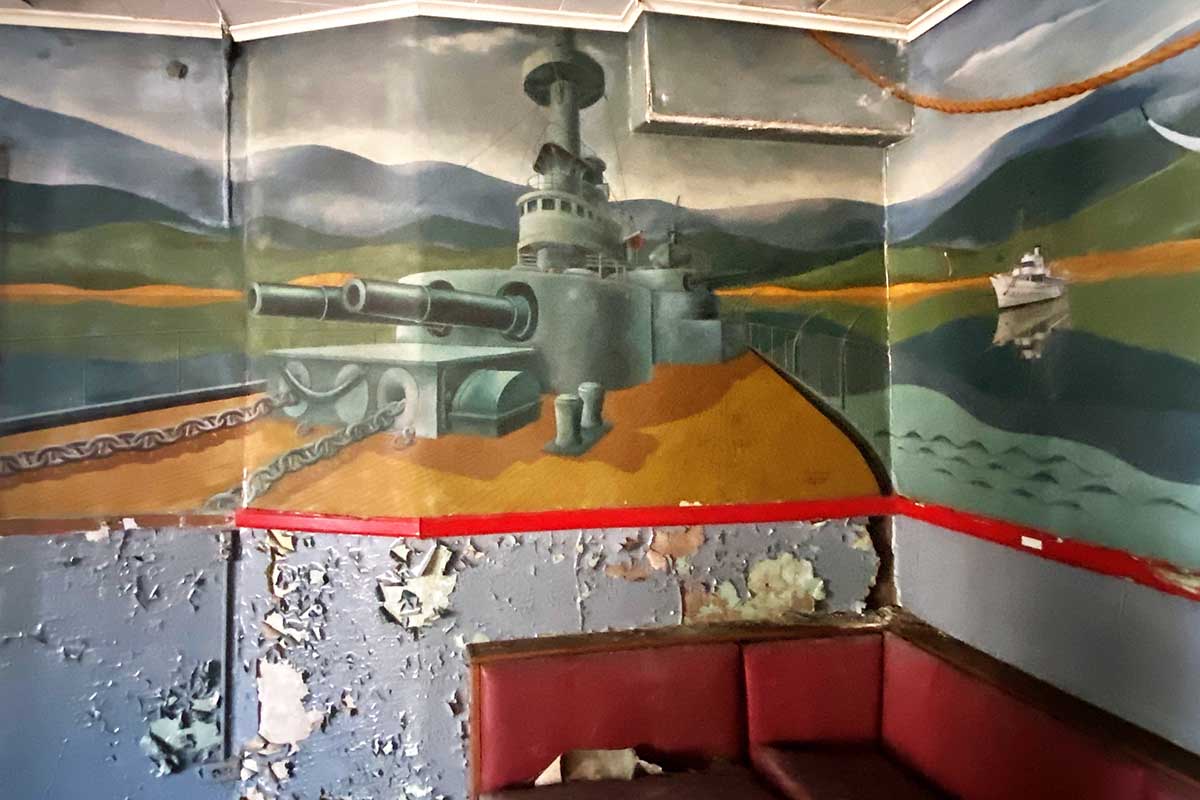 The nonprofit that runs America’s Thanksgiving Day Parade and the annual Ford Fireworks sealed a deal this week to buy a vacant, looted building near Belle Isle and plans an estimated $38 million overhaul of the historic structure.

But the sale to The Parade Co. still faces resistance. That’s partly due to the group’s plan to demolish part of the building whose walls contain murals, along with plaster and wood carvings, created during a national federal program that championed American artists during the Great Depression. The work is often called “WPA-era art,” the acronym for the Works Progress Administration. The art produced during the long-defunct federal program are often considered national and local treasures.

The Parade Co. bought the R. Thornton Brodhead Naval Armory, which contained Michigan’s largest collection of WPA-era art, according to City documents. But thieves have taken almost all of the treasures, according to City officials. Parade Co. officials vow to  “salvage” what’s left of the art, but many preservationists remain skeptical that the work can be rescued under the group’s current redevelopment plan.

The Brodhead Armory is a 91-year-old former Navy and Marine Corps facility.  The building on East Jefferson Avenue is next to Gabriel Richard Park and just east of the bridge that leads to Belle Isle.

The armory has sat empty since 2004, when the City gained ownership. The City did an abysmal job keeping it secure. Scrappers stole almost all of the intricate woodwork, and even now there’s plenty of broken windows, according to various City officials.  Recent photos show portions of the murals are in bad shape. There’s holes in some of the walls/murals and exposure to the weather that fades the color in the images.

This week, City Council approved the sale of the building without an appraisal to the Parade Co. for $300,000 along with 4.5 acres of surrounding riverfront land.

“It’s been a long road, but we got there. We’re elated,” Tony Michaels, president and CEO of The Parade Co. said Tuesday after the City Council vote. The group has been working on the purchase of the building for more than two years, he said. Along the way, some veterans opposed the sale, along with various preservationists.

The Parade Co. aims to convert the building into its new headquarters. It plans to construct a 165,000 square-foot, two-story addition to the back of the building, replacing the existing rear half of the armory.  Renderings of the addition show a facility with sweeping views of the Detroit River along with a pathway linking to the popular RiverWalk.

The nonprofit intends to have public tours, meeting spaces for veteran groups and offer the largest summer camp for Detroit Public Schools, which will be an arts-and-crafts based program, Michaels said. The group has more than 60 full-time workers and 30 freelance artists who help construct parade floats. Besides the parade and fireworks, the nonprofit also is involved with the Turkey Trot, a 10K/5K run/walk before the Thanksgiving parade, and various event planning.

Every effort will be made to save the murals and other artwork, Michaels said. “We do things right,” he said. “We made a commitment to salvage every piece (of artwork) that we can salvage. Those pieces will end up in another part of the building. Whatever we don’t use will end up with the preservationists.”

The Parade Co. said it is still consulting with preservationists on how to save the work.

Some preservationists doubt the murals can survive. The murals and carvings – by artists David Fredenthal, Edgar Yaeger and Gustave Hildebrand – are embedded in the wall, which means they can’t be separated.

“I don’t see how that will be accomplished,” Janese Chapman, director of the City’s Historic Designation Advisory Board, told City Council on Tuesday.  She was responding to Council questions whether the murals could be saved.  “The murals are part of the wall. The walls are part of the mural.”

The building sale has been approved, but next comes the process to secure a development deal with the City and gain the necessary permits to redevelop the building.

Garrick Landsberg, director of the City’s Historic District Commission, said the office has been “deluged” by both local and national groups and individuals who urge saving the murals and other artwork.

The Parade Co. will need approval from the Historic District Commission to gain permits to redevelop the building.

Landsberg added that the commission “will not support and will not recommend …  any permit that does not preserve the artwork.”