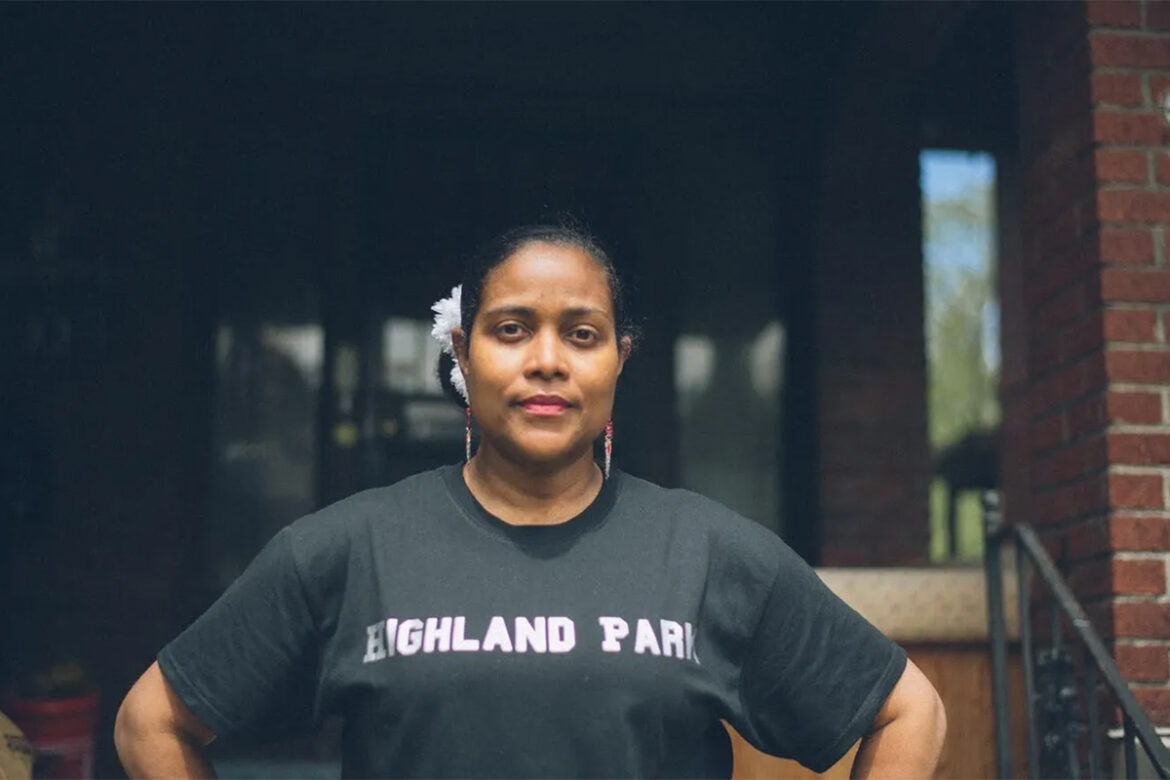 Angela Lugo-Thomas grew up in Detroit and never imagined living in Highland Park. She’d heard stories about crime and drugs in the city.

But 21 years ago, she and her husband bought a home there. It’s where they’ve been ever since, raising their daughters and watching the city go through tumultuous times, as properties emptied and street lights dimmed.

Still, in her eyes, Highland Park is a “gem.”

Nearby, Rezaul Chowdhury,50, moved to Hamtramck six years ago from Virginia because the 2-square-mile city spelled opportunity. He emigrated to the U.S. from Bangladesh in 2000. He came to Michigan because his family lived nearby in metro Detroit and houses in Hamtramck were affordable. It’s a place where new immigrants find a “landing port,” he said.

Lugo-Thomas and Chowdhury live in two cities within Detroit that saw stark population change during the last decade, the latest census data shows. Majority Black Highland Park’s population shrank by 24%, or roughly 2,800 residents, while Hamtramck — where many residents are immigrants hailing from Bangladesh and Yemen — grew by 27%, or about 6,000 residents.

Highland Park residents are largely unsurprised by the population dip and say they lack some basic city services, a functioning school system and are reeling from years of disinvestment. Meanwhile, Hamtramck saw a spike in residents — another expected finding, neighbors say, though some are convinced there has been an undercount of the large immigrant community. 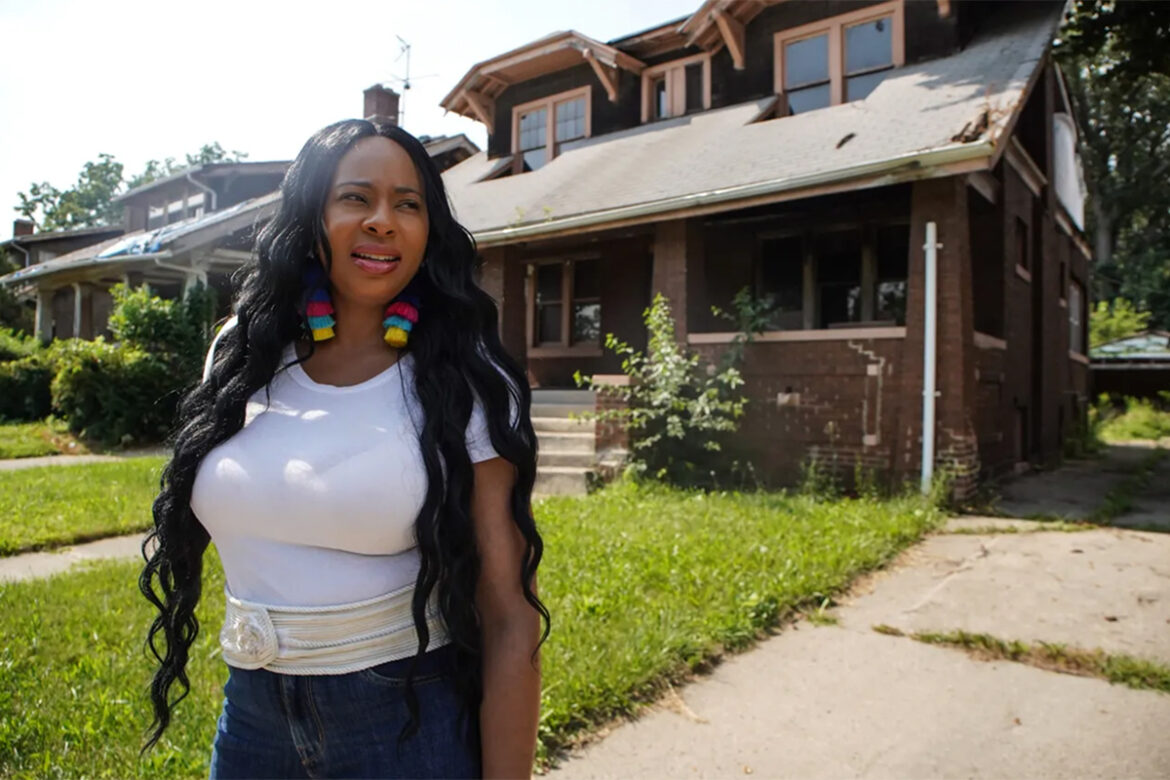 Here’s the story behind the numbers:

Anistia Thomas led the effort to get Highland Park counted in the 2020 census — knocking on doors, sending out mailers and holding rallies.

“We had predicted close to that number,” Thomas, 42, said about the total population count. She’s not surprised by the number of people who reportedly left the city. Still, she says census participation was higher than a decade ago.

Thomas, who sits on the board for public charter school Barber Preparatory Academy, grew up between Detroit and Highland Park. Her family has been in Highland Park since the 1950s. She’s seen it go through what she calls “phases.”

“My father always spoke on how clean the streets were. He said the streets were so clean that you could drop a piece of gum on the ground and pick it up and chew it,” Thomas said.

In many ways, Highland Park is the story of what happens to a city after a booming industry — and its tax base — leaves.

In the early 1900s, Henry Ford built Model T’s and offered a then-unheard-of $5-a-day wage. By the 1970s, Ford left. A couple decades later, Chrysler Corp. moved its corporate base from Highland Park to Auburn Hills. 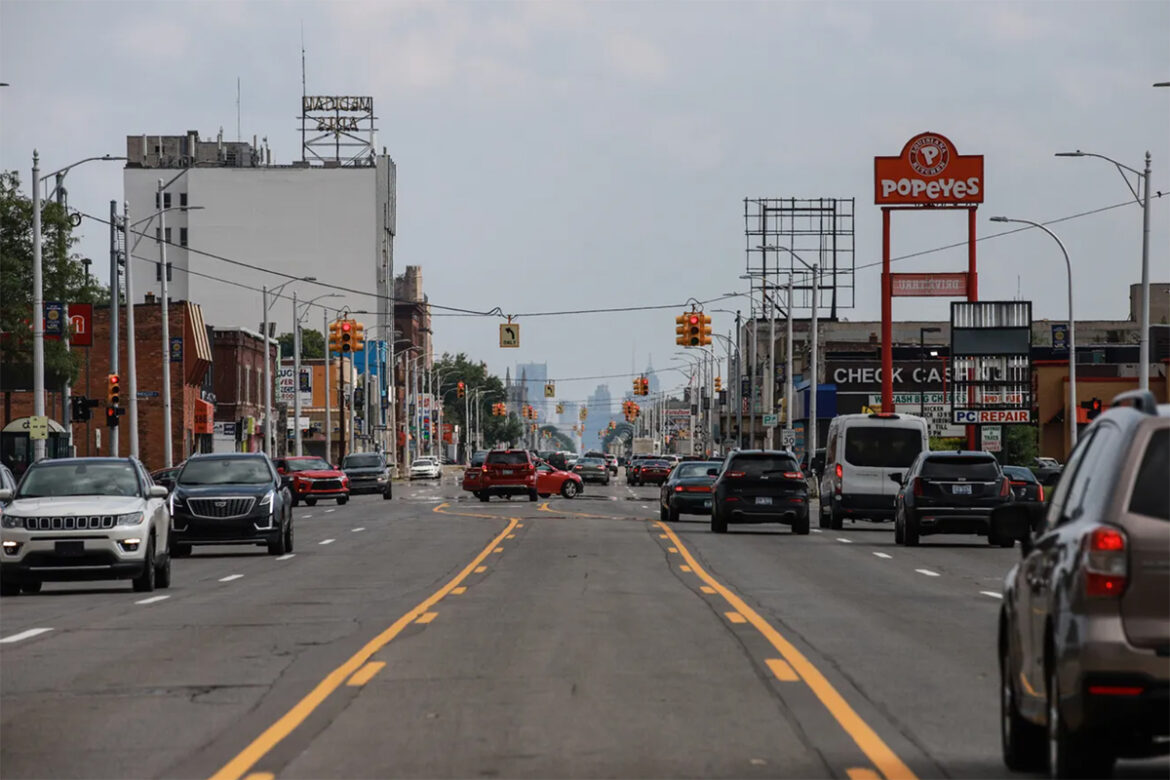 From 2001 to 2009, Highland Park was under state-appointed emergency financial management.

In 2011, DTE removed 1,300 streetlights and installed 200 new ones at intersectionsbecause the city owed $4 million on its light bill, the utility has said.

The following year, the state declared a financial emergency in the Highland Park School District and appointed an emergency manager until 2018. Schools shut down and enrollment declined. 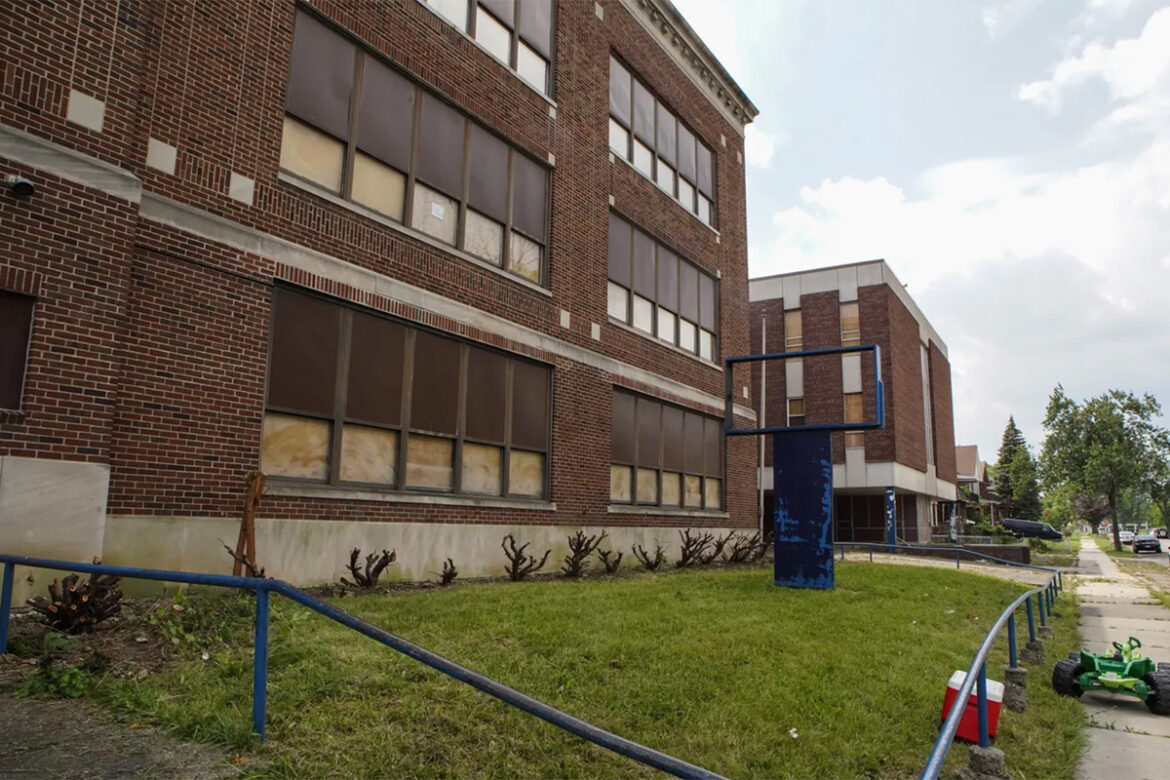 Now, residents lack some city services, such as tree trimming, working streetlights and maintenance of vacant and overgrown fields.

“I do pretty much everything outside of the city whether it’s entertainment and going to eat, shopping … I realized for so many years that I didn’t even walk in my own city, in my own community,” Lugo-Thomas said.

Neighbors say population loss has been going on for decades.

Black, non-Hispanic residents made up 88% of Highland Park’s population in 2020, down from 93% in 2010, according to the latest census data.

The median household income in Highland Park was $18,474 — well below what Hamtramck and Detroit residents make. 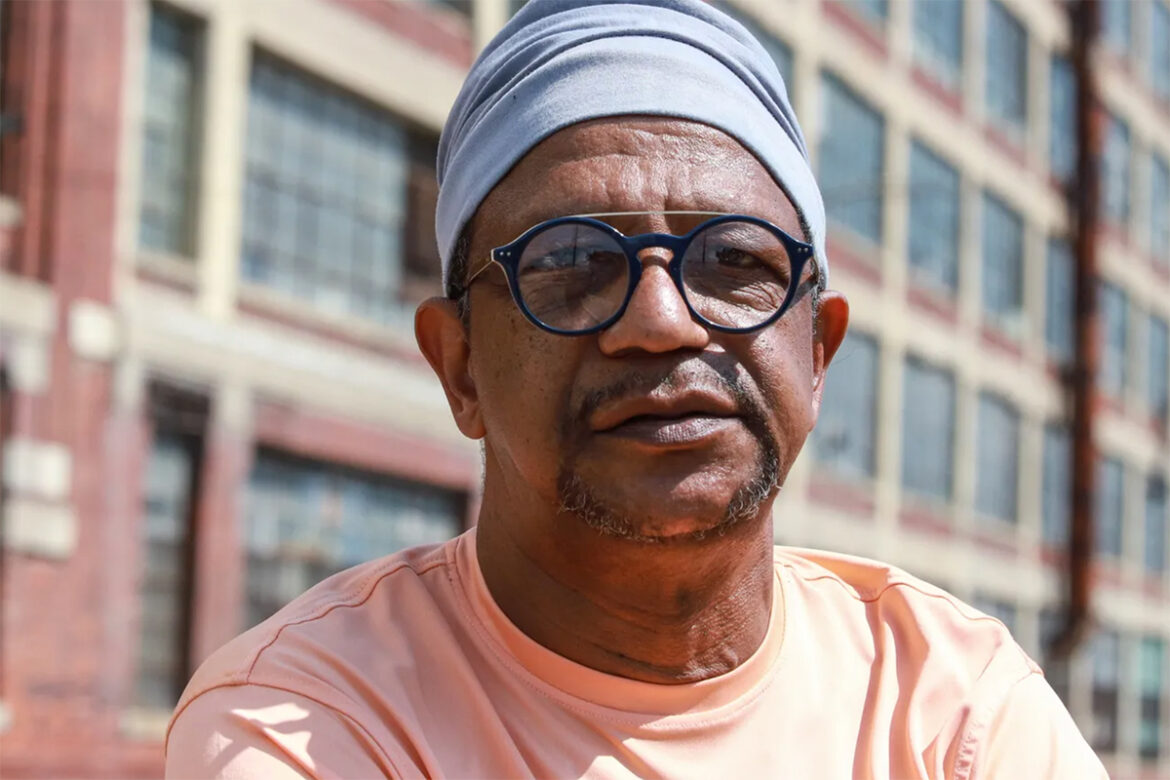 “Hamtramck has not been stripped of its culture and allows its culture to grow. And I will say that cities like Highland Park have been totally stripped of their value and culture from a governmental basis and void of the things that make them grow,” said Mark Hackshaw, president of the Highland Park Business Association.

Still, Hackshaw said he believes there has been an undercount of Highland Park residents in the 2020 census. In fact, people and businesses are coming to the city, he said.

“We see people moving and renovating houses, businesses moving into our industrial centers, bringing jobs. We see new fast food restaurants coming in, strip malls,” said Hackshaw, who has lived in the city for about 20 years and owns high-rise office buildings, fast food restaurants, bars and apartment buildings in both Hamtramck and Highland Park.

City officials said they were not surprised by the decennial census results.

“We desperately needed the resources that were attached to the census,” Councilmember Kendrich Bates said.

Census results are used to determine how to distribute $1.5 trillion in federal funds to states and local governments.

Council President Carlton Clyburn pointed to the loss of housing stock — from fires, the 2009 housing crisis and demolitions — contributing to the city’s population decline. 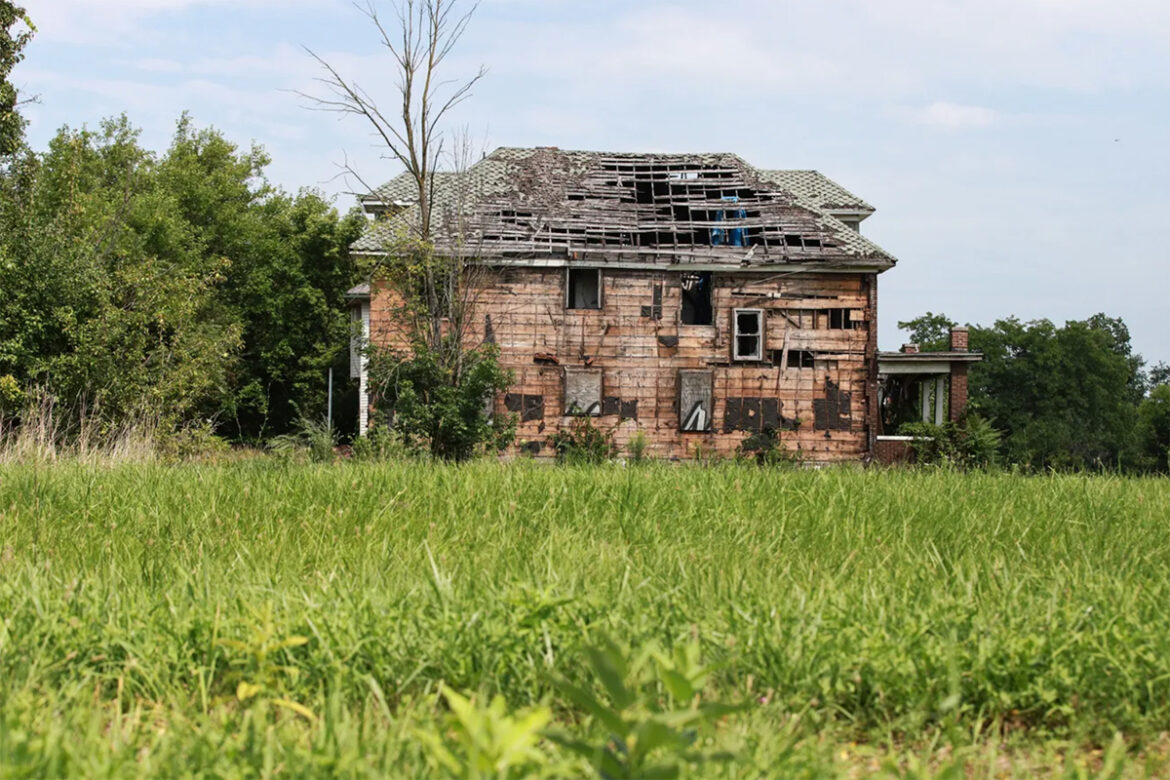 Highland Park lost 16% of its housing stock in the last decade, while the occupancy rate held steady at 76% between the decennial counts, census data shows.

Shannon, born and raised in the city, is the founder and CEO of Parker Village, a for-profit organization that seeks to build a “smart neighborhood.” That includes an urban and aquaponic farm and plans to open a community center in an old school building and converting houses into net zero emission homes.

Lugo-Thomas and her family thought about leaving before. But they ultimately decided to stay. In Highland Park, they are centrally located, near freeways and right off of Woodward Avenue, she said. They also see brighter days for Highland Park.

“Does it make sense to leave at this point? Right at the cusp of what we feel might be the change. And so that’s what we hold on to, we hold on to the hope and optimism that it will get better, and it will be the place that we’ve always dreamed it could be,” she said.

Gracie Wooten, 73, has lived in Highland Park for just over four decades and says the city is full of activists and “dragon slayers” who look out for one another.

“We keep fighting. People always write Highland Park off. The population may be going down but then it’s going up because I see new residents all the time,” she said.

Thomas, who led the census count, wants to bring more federal dollars to Highland Park and make it safer place. That’s what drove her to get the census count in the first place, she said.

She has lived in other cities and came back to Highland Park. The city needs more businesses and stronger schools to build a tax base, she said.

“I remember how beautiful Highland Park was. So it can be, and I believe that it will be, that again,” she said.

Emina Ferizovic came to Hamtramck in 1996 as a refugee from Bosnia and wanted to give back to the city that welcomed her.

In 2015, she started collecting food, clothing and money to help Syrian refugees settle in the area. Since then, Ferizovic, 38, the founder and CEO of J&E Community Relief, has been supporting up to 400 families in Hamtramck, Detroit and Highland Park. 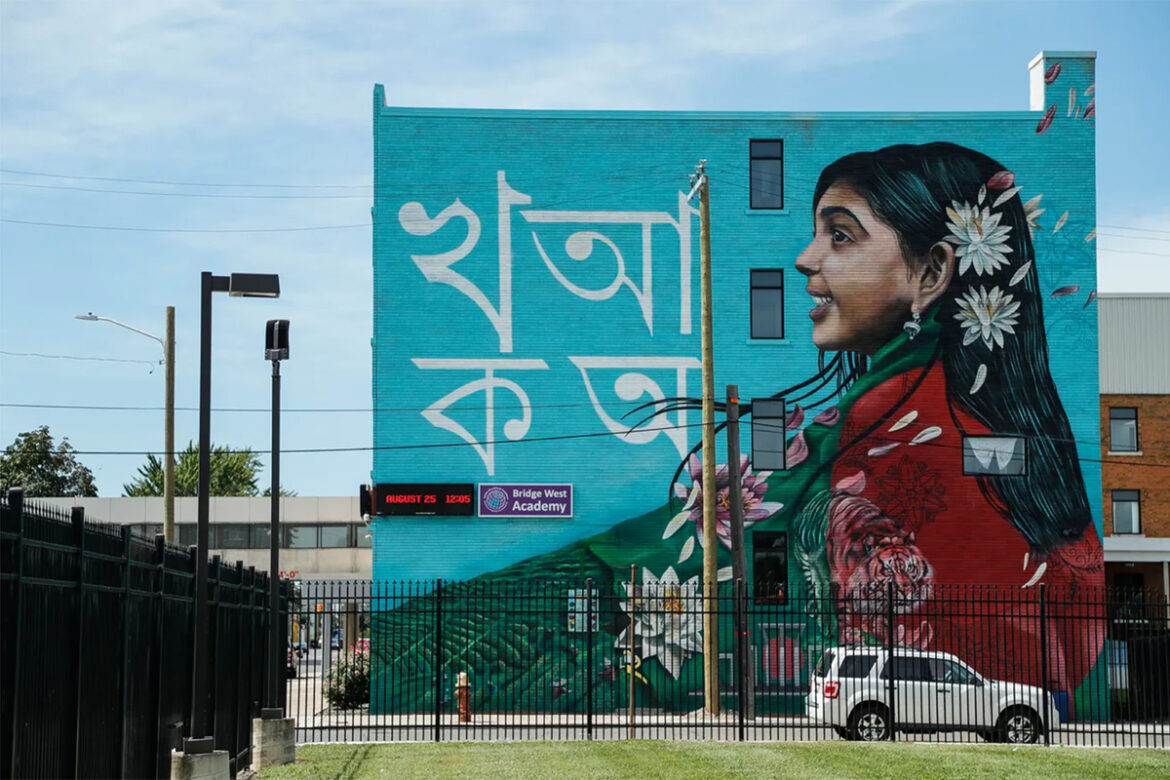 Bangladesh mural on the side of Bridge West Academy in Hamtramck, Wednesday, August 25, 2021.The tea tree farms represent the Sylhet region of Bangladesh which the majority of the Bangladeshi in Hamtramck come from. Junfu Han, Detroit Free Press

“(Hamtramck) represents a new beginning in a way, because if you look around, a lot of families in Hamtramck are either refugees, immigrants, and this is usually the city that you’re able to kind of set your roots and start your life,” said Ferizovic, who lived in the city for 22 years before moving to the suburbs four years ago.

Hamtramck’s population grew by 27%, or about 6,000 residents, the latest census figures show. The city has a population of 28,433 people.

“It’s gratifying to see this enormous increase, but it’s nothing that folks in Hamtramck didn’t already realize and that we haven’t already been seeing for 20 years,” said Karen Majewski, who has been mayor of Hamtramck for 16 years. She’s up for reelection in November.

The city gained a small percentage of housing units (2.5%), but saw occupancy rates increase by 10 percentage points to 91% in 2020.

Conant Avenue — a commercial corridor lined with clothing stores and restaurants — cuts through Detroit and Hamtramck. Nearby, Joseph Campau is home to a host of businesses from Al-Haramain International Food to Dos Locos Tacos. In residential streets, bungalows sit close to one another.

“Everything is kind of right there in a 2-mile radius,” Ferizovic.

Hamtramck’s history is tied to the immigrants who settled there — the German farmers of the early 1900s, Polish workers who came to the city for automotive work, then Yemenis and Bangladeshis who settled in the most recent decades, setting up businesses. 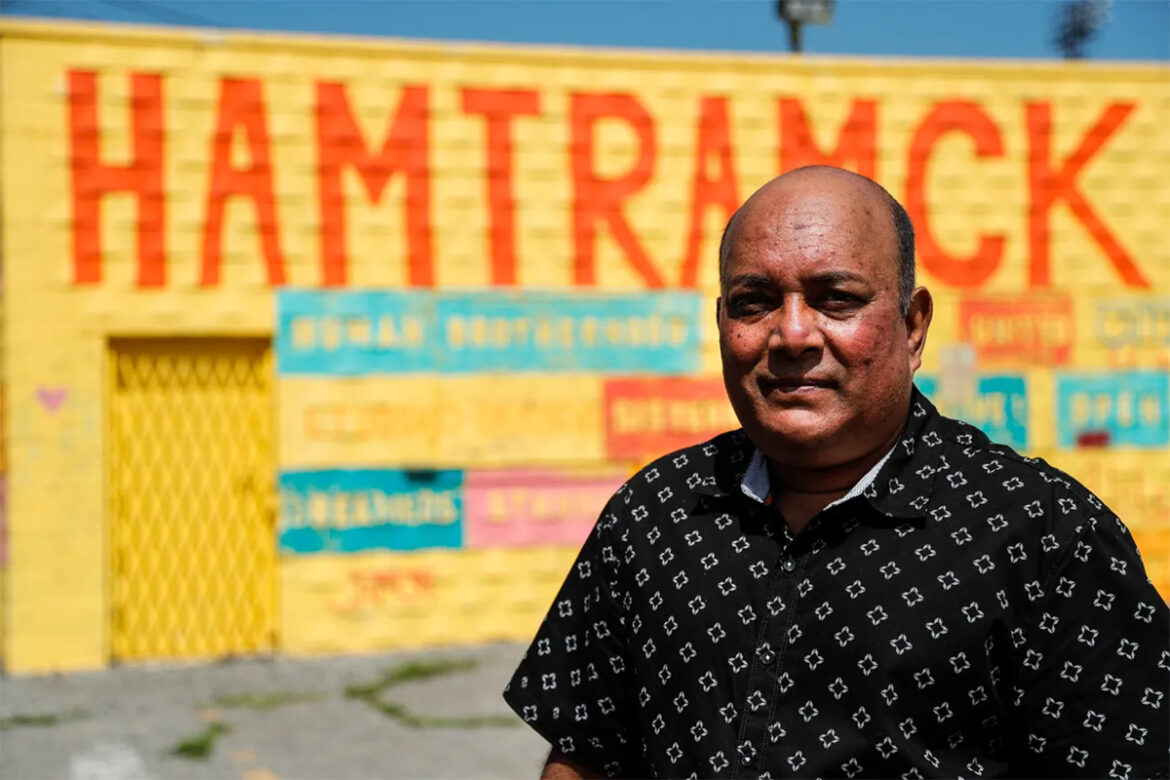 Rezaul Chowdhury, a community engagement specialist for Global Detroit is standing in front of a “We Are Hamtramck” mural in Hamtramck on August 25, 2021. Junfu Han, Detroit Free Press

Chowdhury, who worked to get Bangladeshis counted in Detroit and Hamtramck, said he came to Hamtramck because of the affordable homes and close-knit Bangladeshi community.

In other words, Hamtramck is a “landing port,” he said.

Meanwhile, Majewski said she’s concerned about a decline in African American residents in the city. In 2010, 19% of the population was non-Hispanic Black and in 2020, that dropped to about 10%, census data shows.

Majewski also says there was likely an undercount overall, especially among immigrant or low-income community members who may distrust the federal government with their information.

“They don’t trust the system,” he said about his community.

The census rejected a request by Arab American groups to have a 2020 category of Middle Eastern or North African. Arabs are classified as non-Hispanic white by the U.S. government.

Hamtramck’s non-Hispanic white population increased from 53% in 2010 to about 56% in 2020, according to census figures.

The city became home to many Yemeni immigrants following the war in Yemen, Alasri said.

“This is a place (that) is a good opportunity to provide a living for them,” he said. Still, families need tools and resources to help navigate life in America.

Majewski expects Hamtramck’s population to grow in the next couple decades, but the city is already “landlocked” and doesn’t have much room left, she said.

But she pointed out that Hamtramck did fit thousands more people at one time. It reached a peak of more than 56,000 residents in 1930.

“We’re 2 square miles,” she said. “We live close to each other. We hear different languages on the streets. There are opportunities to engage with people from all over the world. And that is a really exciting kind of place to live.”