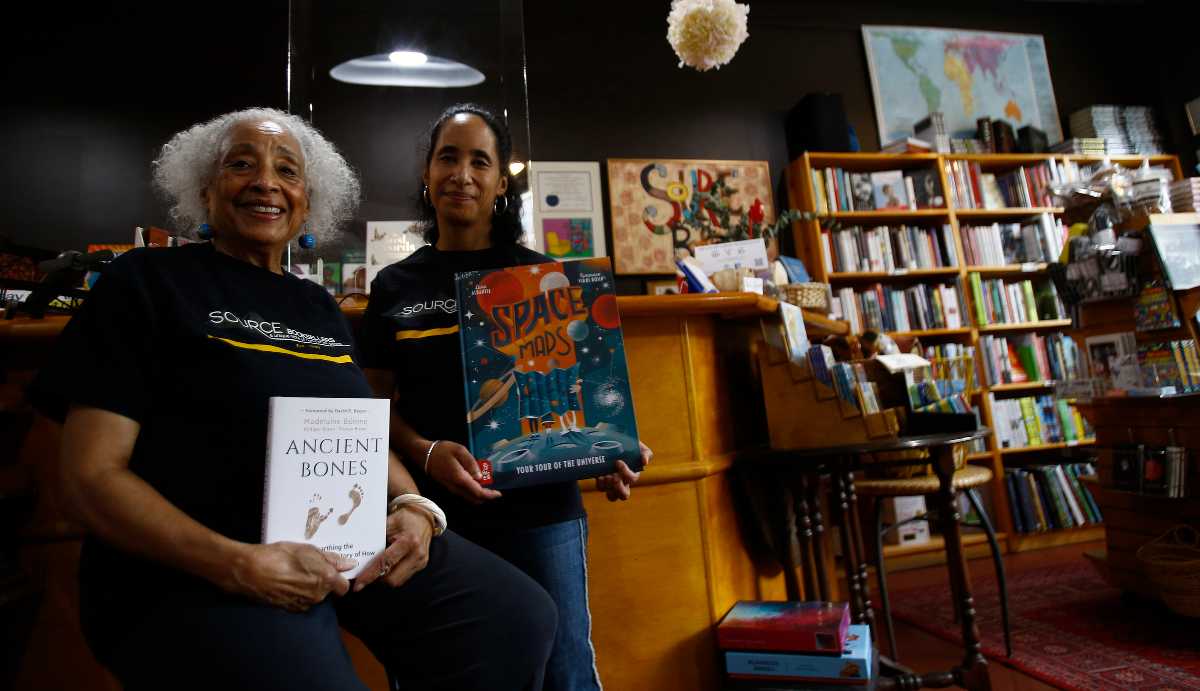 As National Black Business Month wraps up, Black-owned businesses have been hit especially hard with shut downs related to the pandemic.

Across the country, Black-owned businesses were twice as likely to close during the early months of the health crisis and less likely to receive federal support, according to a report from the Federal Reserve Bank of New York.

In Detroit, loan relief, rent assistance and grants from collaborations between public, private, nonprofit and philanthropic groups helped businesses, according to a recent Brookings Institution report by Pamela Lewis, director of the New Economy Initiative, and senior fellow in Brookings’ Metropolitan Policy Program.

This model can work across the country but the public sector should also offer more support to small businesses, she said.

There are more than 60,000 small businesses in Detroit, according to 2012 Census data. Approximately 49,000 are Black-owned, said Kenneth L. Harris, national president and CEO of the National Business League.

For Black Americans, small business ownership is a pathway to economic self-sufficiency, especially in majority Black cities like Detroit, because it not only builds income but wealth over time, Lewis said.

The average wealth of white white families in the U.S. is 6.5 times greater than Black families, as of 2016, according to the Federal Reserve Bank of Cleveland.

For National Black Business Month — started in 2004 by historian John William Templeton and engineer Frederick E. Jordan Sr. to celebrate Black entrepreneurs —  four small business owners in Detroit shared how they are managing the economic impact of COVID-19 and what it means to be a Black-owned business in Detroit.

In his shop on Livernois Avenue, Eric Vaughn frames memories.

What started out as a business he ran out of his New Center apartment became a brick and mortar operation when he opened the doors to Eric’s I’ve Been Framed Shop in 1994.

“My father has always been one about business. He always preached that from day one,” Vaughn, 59, said. His father owned Vaughn’s Bookstore, which Vaughn later bought for his own venture. 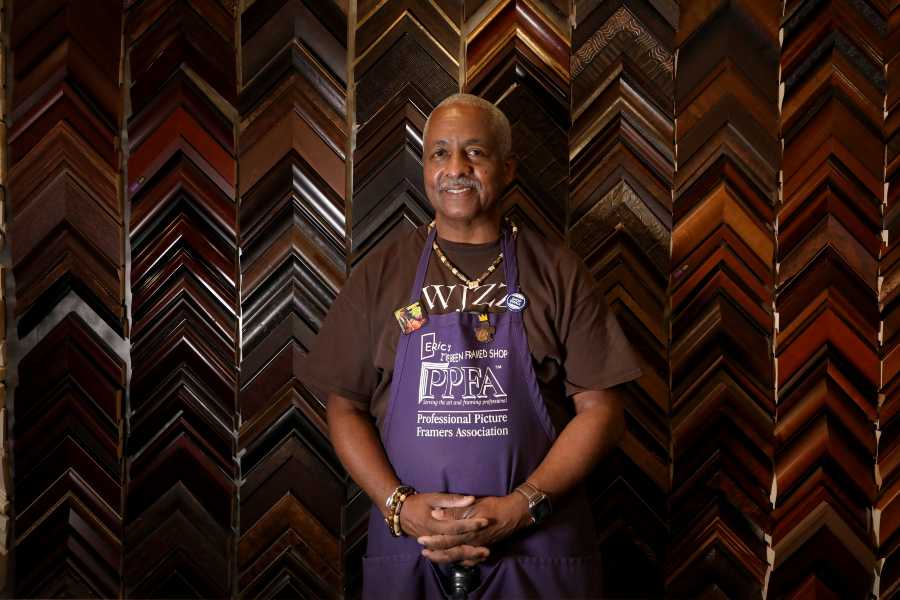 Eric Vaughn, owner of Eric’s I’ve Been Framed Shop, stands in his store on Livernois Avenue in Detroit with some of the hundreds of frames he offers to his customers. (Photo by Eric Seals/Detroit Free Press)

Despite having to close from March to May, he said business has been up because people are stuck inside, staring at their walls —  they want to reframe posters and prints they have. Vaughn is now taking customers by appointment.

Still, the pandemic has been tough for small businesses like his.

He wasn’t able to get a loan from the first round of the federal government’s Paycheck Protection Program because he had a hard time navigating his bank’s application process. He had given up on PPP loans when he received an email from Square, his credit card processing company, about a second round. He applied and received about $7,000.

Vaughn, who lives in Detroit, said many small businesses have had trouble with the loan application process, especially pulling together the needed paperwork.

“There’s gotta be programs out there to assist these businesses so that they help them get these grants and these loans, so that they can move forward,” he said. “I think now is the time since there’s a lot of attention put on Black systemic racism and being in business is the same thing. It’s important that we try to face those challenges head on.”

While the loan is not enough to recuperate his losses, Vaughn remains unfazed.

He said businesses in the framing industry are supporting one another — like purchasing supplies together — as opposed to working separately. The cooperation in these troubling times has been encouraging.

For Vaughn, running a Black-owned business in Detroit offers “a sense of pride.”

“I live in Detroit. I was born and raised here, went to Central High School, then went [away] for college, but I did come back,” he said. “I decided that I wanted to be a part of the community and be an asset to the community.” 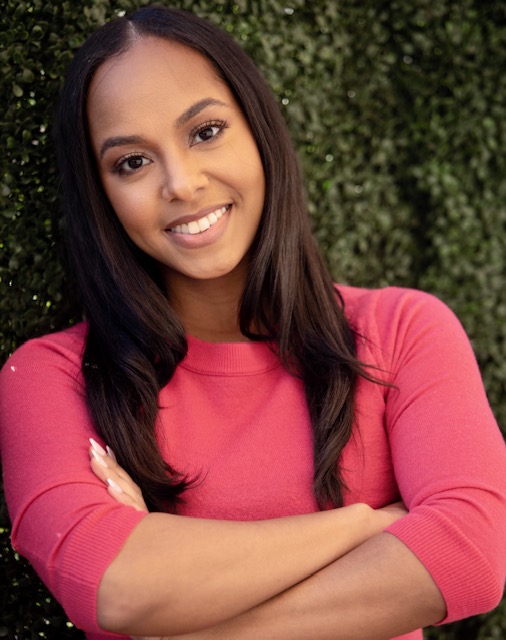 Raven Fisher is owner and founder of Social Tykes, where she’s on a mission to help parents and children expand their circles of friends. (Photo by Chris Evans, owner of Clearly Focused Media Works)

Fisher, a 28-year-old mom of two, is a 2018 Motor City Match grantee. When she had her first son, she felt lonely because her other mom friends were out of state. She came up with the idea for Social Tykes for parents who may feel the same.

Her mission: create a space for parents to connect and let “kids meet other kids and build lasting relationships” and “diversity within their circle.”

Like other businesses set to launch in the summer, the pandemic put a stop to her plans.

Fisher backed out of the lease for her original Corktown space, on Trumbull and Michigan Avenue, because of construction costs. She had already ordered furniture and renderings when she halted construction, and is now paying off some of these expenses, while still planning for her business’ future.

“Opening a business is by no means cheap,” Fisher said, who works for a logistics company but wants to turn Social Tykes into a full-time endeavor.

Securing loans has been difficult because of the requirements, she said.

Now, as she scouts a new location —  ideally in Corktown or Midtown Detroit —  Fisher hopes to open Social Tykes next year. She’s optimistic.

“Black Lives Matter and I am a Black owned business,” she said. “…I want us all to support one another.”

In March, Source Booksellers — a boutique store in Midtown Detroit known for its collection of nonfiction reads — quickly went online.

“We’ve managed to keep going and to really increase our reach geographically as well as our demographics of people who know about us, near and far,” said Janet Webster Jones, 83, the owner of Source Booksellers on Cass Avenue.

Because of social media advertising, the store has received orders online and via email, phone calls and Instagram.

Initially, cash flow was one of the biggest challenges, and two of Jones’ employees are on furlough while she and her daughter run the store in person. Jones started the application for PPP twice but said the process was difficult.

However, grants from Techtown, the Detroit Economic Development Corporation and the Book Industry Charity Foundation are helping to offset costs including rent, utilities, taxes and supplies.

“In business, you have to be nimble, because things are always changing,” she said.

Jones started selling books in 1989 at events. She opened a brick and mortar store in 2002 on Cass Avenue and moved to its current location, right across the street, in 2013.

“All along the way I was serving the needs of people that I encountered,” Jones said.

On Fridays after prayer time, Khalipha Kane sells “halal soul food” from her food truck outside mosques in Detroit.

Kane’s menu — barbeque beef ribs, lamb shanks, candied yams, macaroni and cheese and “Khalipha’s special sauce” — is built from years of experience catering on the side and a desire to serve her community, the self-taught chef said.

“I finally felt like I found my niche, even though I didn’t envision myself being a cook, a caterer, a chef,” she said about starting her business — Kalipha’s Katering. 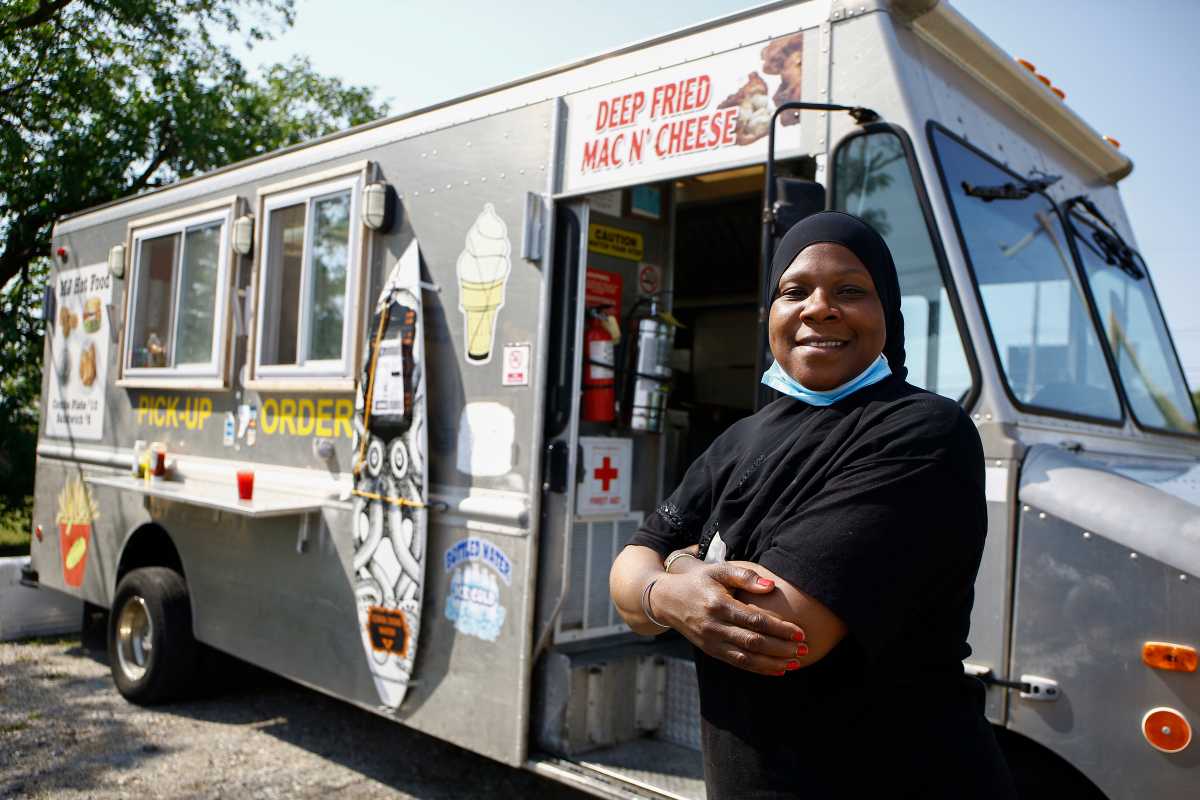 Khalipha Kane stands in-front of her food truck in Detroit. On Thursday’s you can find Kalipha’s Katering at the corner of Hudson Street and Wabash Street in-front of the DDOT bus terminal. (Photo by Rodney Coleman-Robinson/Detroit Free Press)

Kane, 44, started catering 23 years ago and served birthday parties, weddings, block club meetings and iftars, the sundown meal to break the fast during the month of Ramadan. For years, Kane wanted a brick and mortar venue but soon realized a food truck was best because she could go directly to her customers.

She bought her first truck this year with money raised during Ramadan through a crowdfunding website and is hoping to start making payments on a second truck she has purchased.

But operating a food truck is expensive and what she makes is “barely enough to keep it running,” pay off debt for her first truck and manage expenses, like paying her five employees, she said. The pandemic has slowed some fundraising opportunities and Kane lost work at a local daycare after it temporarily closed.

Still, the time off from her job has been “a blessing” because she’s focused on her food truck’s first year in business.

“Even though … you can’t go to festivals, normal opportunities, the beauty is that the slow pace of the economy allowed me to learn this business.”

Kane envisions her mobile kitchens in cities across America.

“I’m creating jobs. I’m helping other families survive. Even in this pandemic, I am offering employment opportunities to people that aren’t employed.”