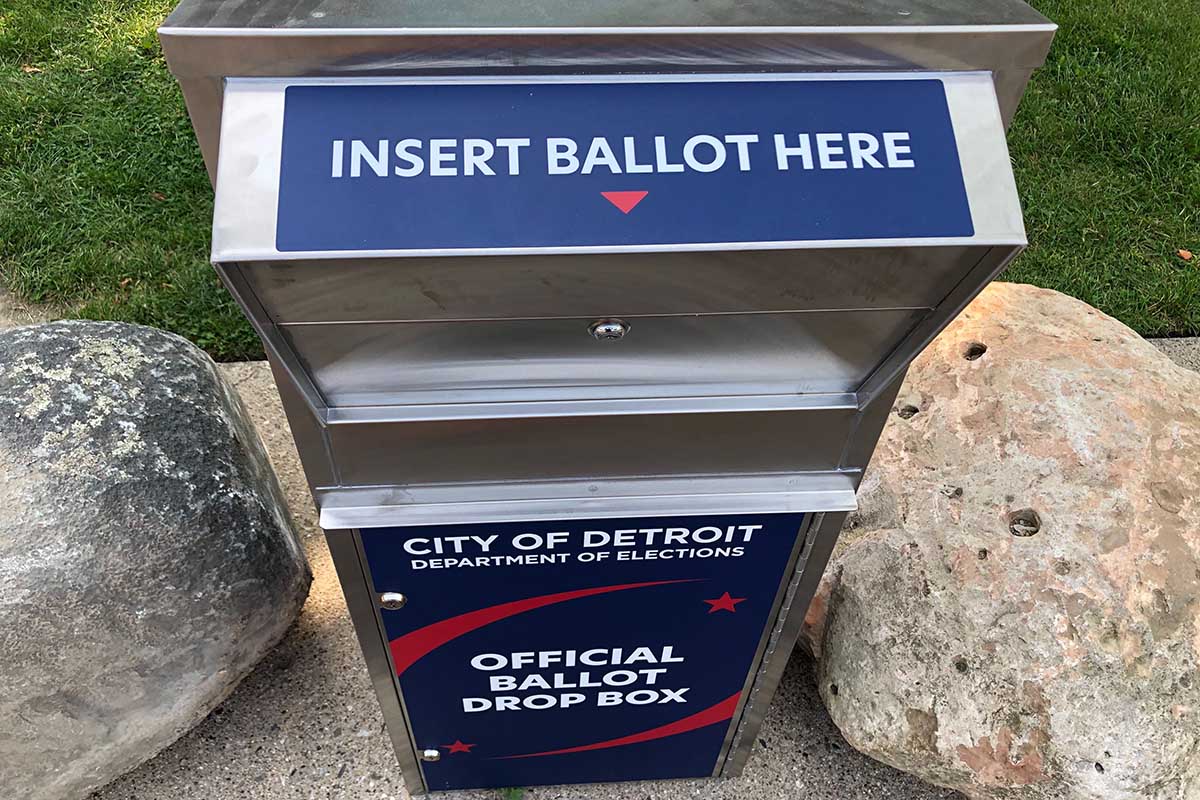 City Clerk Janice Winfrey has asked voters not to mail ballots because the election is so close. They can be cast at a dropbox or turned in at the Department of Elections, 2978 W. Grand Blvd. in New Center. (BridgeDetroit photo)

It’s almost primary election day in Detroit, and there are a number of important issues and positions on the ballot. From the mayoral race to the controversial Proposal P ballot initiative, the decisions  Detroit voters make on Aug. 3 could make longlasting changes to the way city government is run.

Along with the candidates and ballot proposals, there are changes to the voting process from the November election that you should be aware of. First, Detroit reduced the number of absentee ballot dropboxes from 32 during the November 2020 election to 19. Last year, the Department of Elections had an additional $7.2 million in grant funding to run the election, and the city saw record numbers for voter turnout.

Do you have a ballot?

If you haven’t received an absentee ballot or the requested ballot never arrived, City Clerk Janice Winfrey says voters should call the Department of Elections at 313-876-0190 or vote in-person at the polls or at a satellite location. There are also two satellite voting offices available in each council district.

“They can also go to the vote center closest to them and cast their ballot in person,” Winfrey said.

Last August, there was widespread confusion about last minute changes to polling locations, but there have been no reports so far of late changes this election cycle. To find out where your polling location is, go to the Department of Elections website voter index and type in your name, birth year and ZIP code.

Winfrey also recommends that voters take absentee ballots to a dropbox or to the Department of Elections office at 2978 W. Grand Blvd. instead of mailing it in with less than a week before the election. Office hours are 8 a.m. to 5 p.m. Monday through Friday.

A full list of dropbox locations is available on the Department of Elections website. All dropboxes in the city are available 24/7 until 8 p.m. on election night, which is when the polls officially close.

Before going to vote in person, be aware there are the same COVID-19 restrictions in place as during the November election, despite vaccination efforts. Winfrey says to vote in person, you must wear a facemask, even if you’ve been fully vaccinated.

“All of our staff will be wearing masks, as well. There will be PPE stations, and all of our equipment is wiped down between each voter,” she said.

BridgeDetroit and the Detroit Free Press developed a 2021 Detroit Voter Guide, which offers information about the Aug. 3 Detroit primary election. We sent questionnaires to candidates in every primary race. Detroit voters, enter your address to learn about the candidates and issues that will be on your ballot.

What other questions do you have about next week’s election? Let us know on Twitter @BridgeDet313, and don’t forget to subscribe to our newsletter FOR FREE at BridgeDetroit.com.