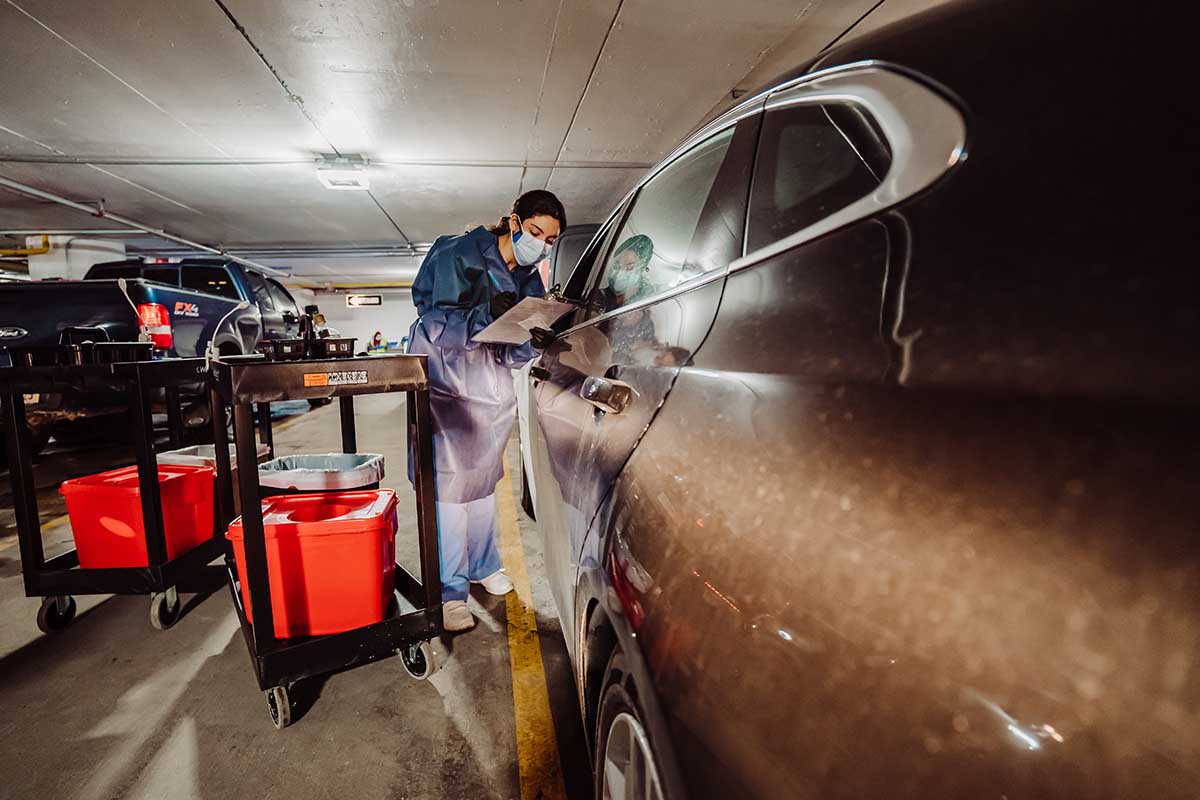 Three-person medical teams greet patients at each drive-thru lane at the TCF Center to answer questions, assist with paperwork, and administer the coronavirus vaccine. (Photo courtesy of Valaurian Waller)

Two weeks ago, it may have taken up to two hours to get through the COVID-19 vaccination process at the TCF Center in Detroit. On Friday, some patients waited as little as 10 minutes to see the front of the line now that the City has a better understanding of the volume of traffic to expect.

Ten minutes may be faster than the average wait time, but Detroit’s Chief Operating Officer Hakim Berry says his goal is to get Detroiters vaccinated in under one hour’s time. 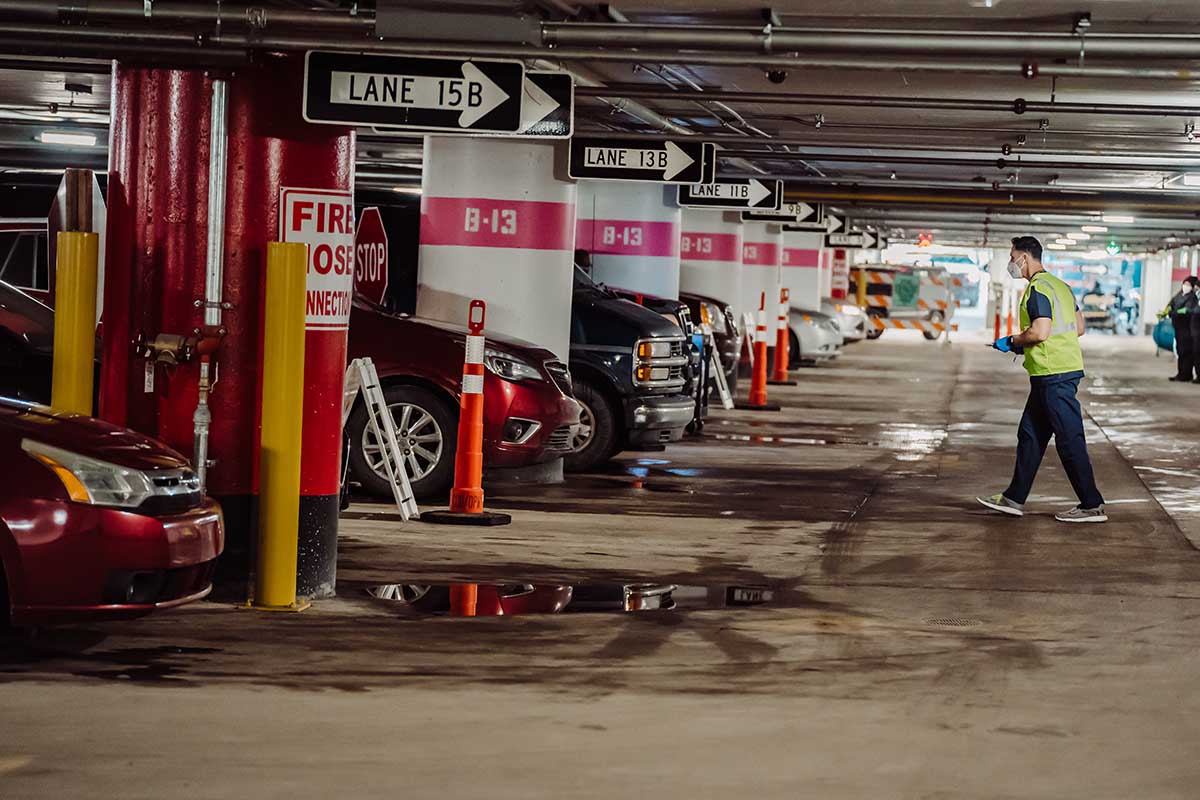 A garage within the TCF Center has been the City’s hub for drive-thru coronavirus vaccines the past month. (Photo courtesy of Valaurian Waller)

Detroit began a drive-thru coronavirus vaccine program on Jan. 13 at the TCF Center. The operation is similar to the City’s drive-thru coronavirus testing sites at the State Fairgrounds and the Joseph Walker Williams Community Center. According to City officials, thousands of cars are bringing Detroiters to TCF everyday to receive the vaccine. Berry, who has overseen the planning, implementation, and now ongoing operation, says it all started on a white board in his office and with help from City architect Jeff Klein. Now, Detroit is receiving national recognition from the Federal Emergency Management Agency (FEMA) and the Biden administration for implementing an efficient vaccination process.

How to Book a Vaccine Appointment:

City officials considered several locations for the vaccine program, although Berry says the TCF Center was the best option for a drive-thru service, especially during winter months. Renting the TCF Center costs the city $45,000 per month, at minimum, and staffing has cost an additional $3 million so far. The City has also partnered with two churches in Detroit to administer vaccines on Saturdays in February. During a Monday press conference, Mayor Mike Duggan said he anticipates two more locations to open soon in southwest Detroit.

The vaccination effort’s initial phase allowed only adults 75 or older and first responders to register for the two-dose shot. The City has expanded its program each week, including 60 year-olds with chronic diseases on Wednesday. According to the city’s vaccination dashboard, more than 70,000 doses have been administered. Mayor Mike Duggan has said he’d like to see 70 percent of Detroiters vaccinated. Right now, the City receives about 15,000 doses each week to administer to residents. 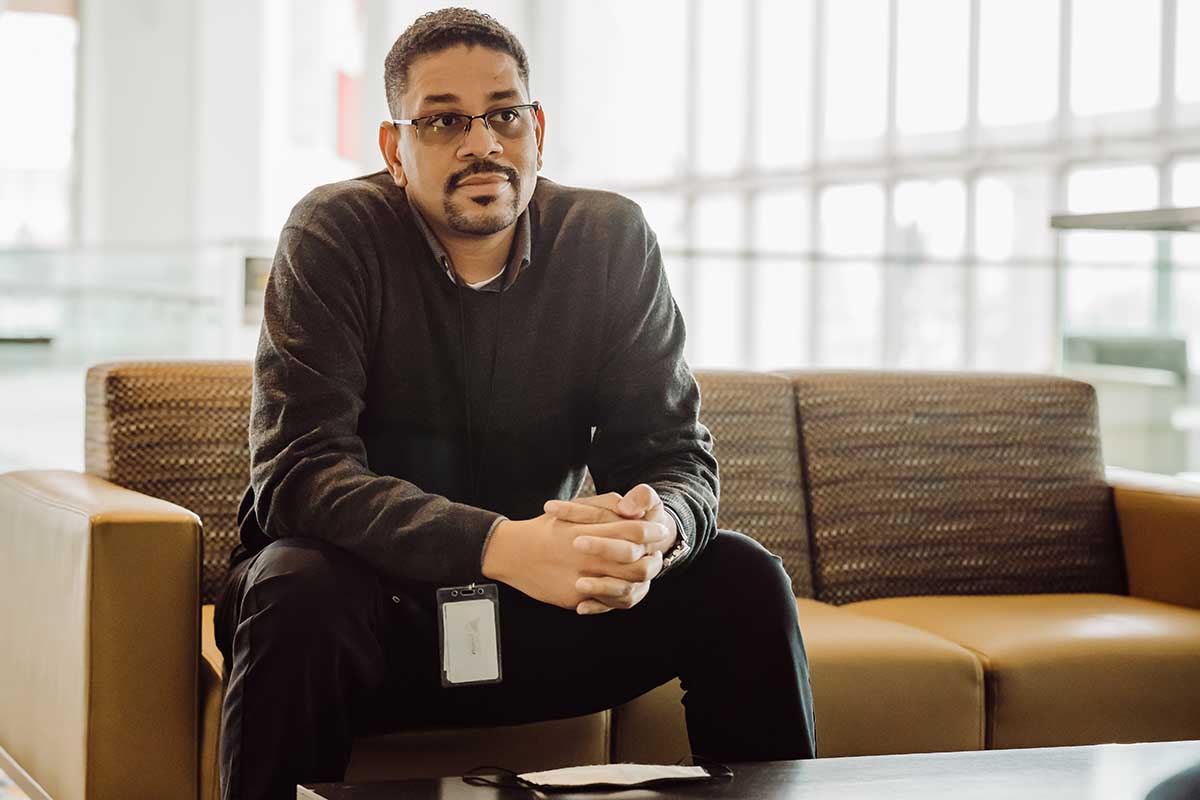 Hakim Berry, the City of Detroit’s chief operations officer, is responsible for the coronavirus vaccine process at the TCF Center in downtown Detroit. (Photo courtesy of Valaurian Waller)

Using two floors within a TCF Center garage, the City has created 27 drive-thru lanes. Berry said the parking garage allows enough airflow to prevent car exhaust from building up,  and the exterior walls block ongoing bursts of cold wind during the winter. The garage is also heated. Each lane has its own medical team of three staff to help with paperwork, answer questions, observe the process, and administer the vaccine. Berry says about 150 medical staff are on site, with 60 to 70 police officers, traffic control workers, and general laborers each day.

“I’m very blessed, very fortunate that we have a dynamic team of talented Detroiters who are dedicated to the work. (Especially) our traffic engineers who constantly study how to make this flow better,” Berry said.

“I feel like we’re doing our duty to the citizens of Detroit,” – Madaline Berry, a nurse working at TCF Center vaccination program

Madaline Berry, a nurse who has worked at TCF since the vaccine program began, and no relation to the City’s COO, called it “one big mega operation.” She says that even though the City has expanded eligibility week-by-week, staff are working well together and learning to help further reduce wait times.

“It’s been really smooth, very professional, and I feel like we’re doing our duty to the citizens of Detroit,” she said. “We’re getting everyone here. We have a really good group of people here; nurses, pharmacists, and clinical people helping with paperwork and keeping the system going.”

She says that she has worked up to 14 hours a day at TCF but is thankful.

“Everyone who is volunteering their time and are putting efforts away from their families, I’m so grateful to be working with these people,” she said.

The nurse suspects that some Detroiters are nervous about getting the vaccine, but said that most who have arrived at the TCF Center have been glad to qualify for receiving their doses.

The City also has emergency services on site in case a patient has an adverse reaction or other health concerns. The Centers for Disease Control and Prevention (CDC) has reported sore muscles, fatigue, or mild fever as potential reactions to the vaccines. The COO says EMS has been used only a few times each day for situations, including an extreme fear of needles and allergic reactions. 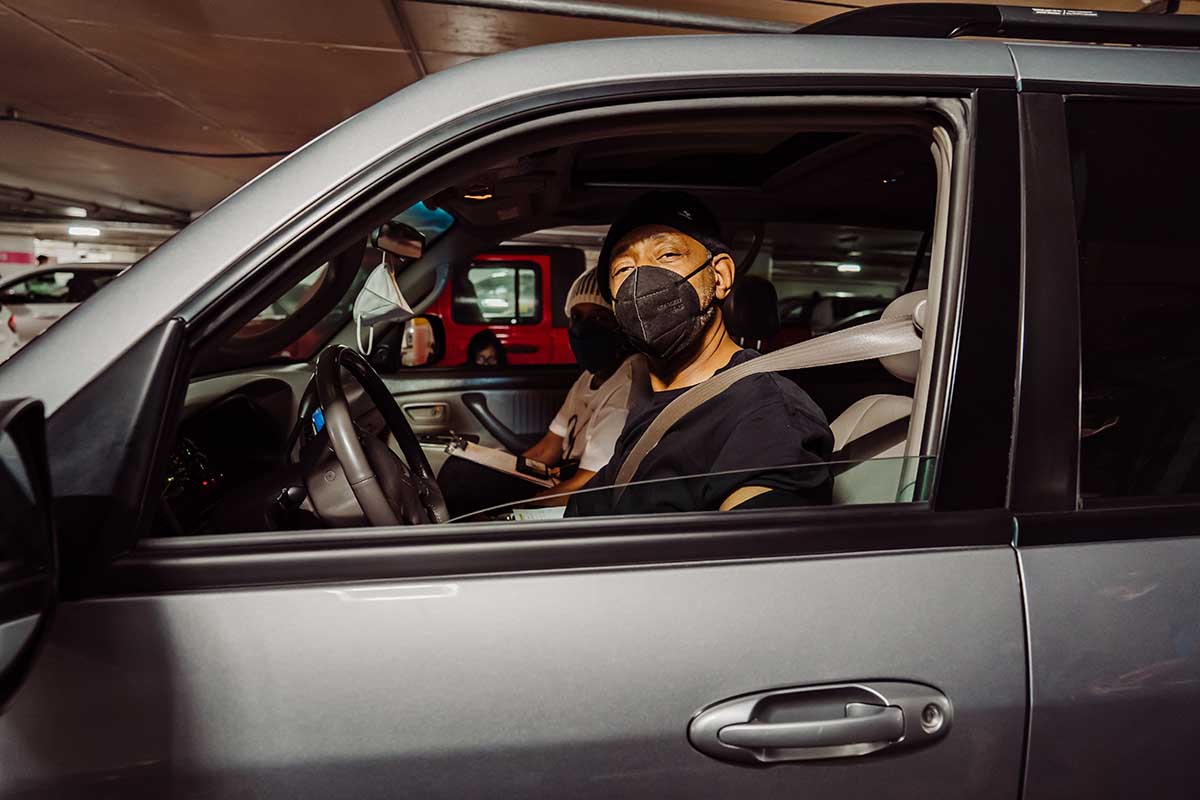 Byron White and his wife of 40 years waited in line on Friday, Feb. 12, to receive the coronavirus vaccine at the TCF Center. (Photo courtesy of Valaurian Waller)

According to the CDC, vaccines are one tool to prevent the spread of coronavirus, and are safe. The City offers vaccines from Pfizer and Moderna, and each requires a patient to receive a dose to prepare their body and a second dose several weeks later to complete the inoculation.

Byron White says he heard about the vaccine through family members and the news media. He and his wife of 40 years work at a funeral home and were in line last week to get the vaccine. White said he was “never nervous” about getting the vaccine because he read about how it was created and what the vaccine is supposed to do for the body.

“Fear not,” White advises his fellow Detroiters. “It’s nothing to fear. (They’re) very efficient, and it’s a little time of your day to help society.”

Gail Churikian waited in line at the TCF Center with her husband on Friday. The couple is both over the age of 65 and therefore qualify for the vaccine. She said she’s glad to see Detroit Mayor Mike Duggan, Michigan Gov. Gretchen Whitmer, and President Joe Biden creating avenues for people to get vaccinated.

“I feel really good,” Churikian said. “I was just telling my husband, I was thinking of Joe Biden when I came in here. I’m thankful that the president has all of this going in the country.”

Due to inclement weather, the TCF Center’s vaccination center was closed Tuesday, and anyone scheduled to receive the vaccine that day will now be scheduled for the same time on Saturday, Feb. 20. Detroiters who have a schedule conflict due to this change should call to book a new appointment. Residents who requested a ride to the TCF Center through the city will still be given transportation and their previously scheduled lift will be honored.