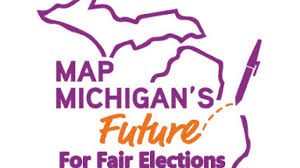 In 2018, Michigan voters approved a ballot proposal to create the citizen-driven commission to redraw congressional and state legislative district lines.

The two women, Juanita Curry and Brittni Kellom, are the only Black Michiganders to be chosen for the commission. The group was required to reflect political, geographic, and population demographics. Four commissioners are Republican, four are Democrats and five are not affiliated with either party.

Michigan voters approved a ballot proposal in 2018 to create the citizen-driven commission to redraw congressional and state legislative district lines rather than the state’s Republican-led legislature to encourage transparency and to deter one party from benefitting more than the other.

According to Curry’s application, she is a 72-year-old pastor and registered with the Democratic Party. Kellom, who runs Just Speak, an advocacy organization for child survivors of trauma, is expected to turn 34 this month and is also a Democrat.

Commissioners will receive a $40,000 stipend for their time and are required to listen to voter input from across the state. Just over 9,300 registered voters applied for the commission with 200 making it to the semifinalist round. The Speaker of the House of Representatives, House Minority Leader, Senate Majority Leader, and Senate Minority Leader were each given five constitutional strikes from the semifinalist list. Of the remaining 180 applicants, a computer randomly selected the final 13 commissioners on Aug. 17.

The commission is expected to begin work in September and have until Nov. 1, 2021 to finalize the maps.