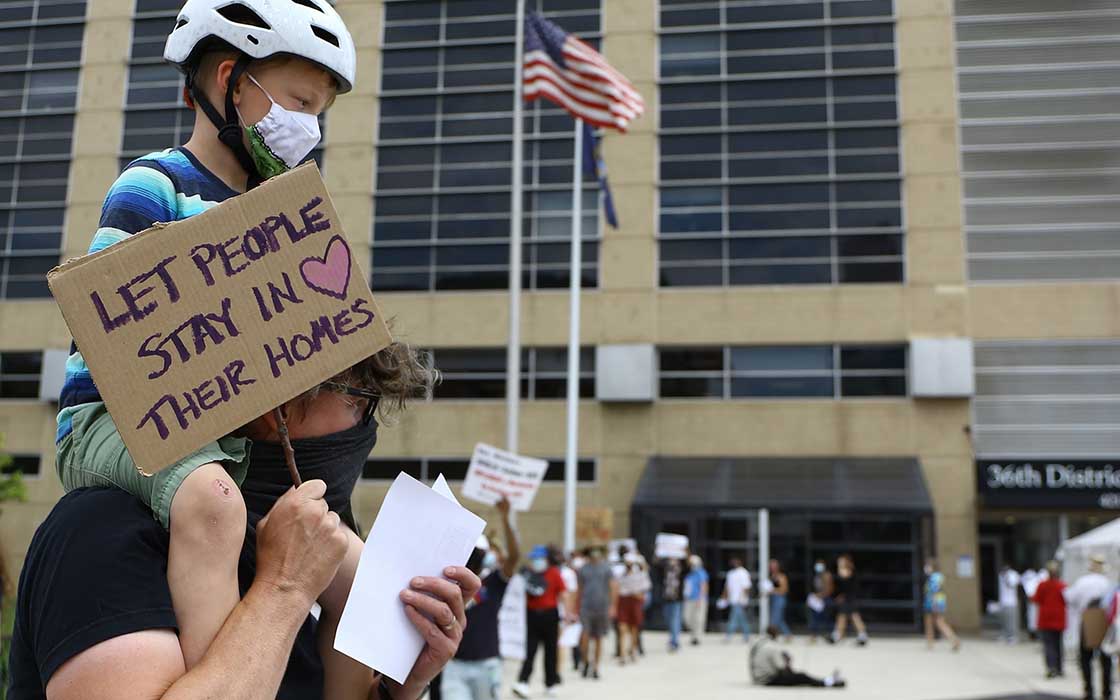 Demonstrators protest evictions outside of 36th District Court in Detroit on Aug. 17, 2020, ahead of the expiration of the court's moratorium on evictions. (Detroit Free Press photo by Rodney Coleman-Robinson)

As Michigan lawmakers negotiate how to dole out federal COVID-19 relief dollars earmarked for Michigan in December, thousands of renters are waiting for help to pay back rent and avoid eviction.

Senate Republicans said Friday they are working with the House to reconcile their differing plans, and work with the Whitmer administration, noting the Senate could have a bill to vote on next week.

The Michigan State Housing Development  Authority, responsible for administering the rental aid through agencies across the state, said it’s unclear exactly how many renters are waiting for aid, but estimated a backlog of between 6,000 to 8,000 renters across the state. One Detroit housing nonprofit alone has a backlog of 2,000 households who need federal rental assistance.

Even after the legislators allocate money for renters and landlords, housing nonprofits may be racing to distribute dollars ahead of a March 31 deadline, when a federal eviction moratorium expires. If the deadline is not extended, renters who are covered by the federal moratorium face having to immediately pay months of back rent, and potential evictions.

That’s what Joaquin Newton, a disabled veteran living in Oak Park, worries about.

“I can very easily lose everything. … I could wind up in a shelter,” he said.

Newton, 52, owes about $8,600 in back rent since March, when he was laid off from his job at a supermarket due to the pandemic. Since then, he worked a temporary gig in the fall and has just landed a full-time job.

Newton is facing a mountain of back rent and his landlord is now requiring thefull amount of back rent. Last fall, Newton received about $2,500 from the state’s last rent aid program, which ended in December. He was told in court last year that he’d be eligible for more assistance but housing organizations that can help him are waiting for the Legislature to allocate federal rental aid.

Newton says he feels as though he and renters like him have “been forgotten.”

“We need elected people to, at this point, be heroes,” he said “… They can be our heroes, by cutting the red tape and moving forward with the relief that’s needed.”

United Community Housing Coalition in Detroit has a backlog of about 2,000 households waiting for new rental aid.

The Michigan State Housing Development Authority can’t launch a new rent aid program until the state Legislature approves more than $622 million from the federal government to put toward emergency rent and utility needs.

“I look forward to the Legislature finalizing a COVID recovery plan in the very near future. … We are calling for releasing this funding in installments to allow oversight and ensure it is spent properly,” House Appropriations Chair Thomas Albert, R-Lowell, said in a statement Thursday.

A spokesperson for Gov. Gretchen Whitmer in a statement Thursday said Republicans are withholding “billions of dollars in federal funding that are meant for Michigan families, which has real consequences for those who need it the most,” adding that the governor is ready to work with the Legislature.

Senate Appropriations Committee Chairman Jim Stamas, R-Midland, said in a statement Friday that the Senate and House “are coming together to reconcile our differences and work with the administration to finalize the next COVID-19 relief supplemental, which will contain this rental assistance funding.”

The Senate could have a supplemental bill to vote on next week, he said.

Joey Lindstrom, field director for the National Low Income Housing Coalition, said it’s hard to identify a policy reason why a state would delay allocating the federal funds it has received for rental assistance.

“It’s not as though the states can take this money and spend it on some other purpose, they can’t. They can’t divert it, they can only send it back,” he said.

In his statement, Albert recognized federal deadlines to spend the rental assistance.

‘Scraping up the crumbs’

MSHDA and housing organizations thought they would be able to distribute federal money for rental aid sooner.

“The total disregard that Lansing seems to be having for how … we implement this thing in the field is just sort of appalling,” Phillips said, adding that “there’s a tremendous amount of work. Throwing this additional hurdle on all of us is just absurd.”

“There’s definitely concern that as we get closer to that moratorium ending. … We’re worried that we will not be able to get the applications processed quickly enough to be able to avoid those evictions that could take place in early April,” she said, adding that it’s unclear whether the federal moratorium will be extended again.

Now, the nonprofit is “scraping up the crumbs of every available grant that we have,” said Lisa Chapman, director of Covid Emergency Rental Assistance at CHN.

“It’s like putting a Band-Aid on a leak in the dam,” she said. “It might help one or two people here. It’s better than not doing anything, but it’s not at the volume or the scale that we really need.”

Rose said renters and landlords are eager to get the program started.

William Kaupas, who owns the rental company 360 Management, said landlords and property owners are caught in the middle, too.

“I don’t care if anyone’s Republican, Democrat. It’s just a silly thing to die on the hill for. Like, it’s people’s houses. The money’s there. It didn’t come from the state, it came from the feds. Why, like, what’s the holdup?” he said.

Michigan’s central 211 dashboard reports that rent continues to be one of the top COVID-19 related needs for which people call the service, right above vaccine information.

About 100,000 Michiganders, from Jan. 20 to Feb. 1, said they’re at risk of eviction or foreclosure in the next two months, according to the Census Bureau’s Household Pulse Survey.

“Playing games with rental assistance really threatens the vitality of Michigan’s economy moving forward,” Lindstrom said. “The revenue of housing providers is put back into the economy when they invest in repairs and upkeep of their properties. And of course, this helps them to prevent foreclosure and we know that there are significant economic consequences of a rapidly increasing foreclosure rate.”

In the meantime, Newton said he wants some stability. He likened the situation to driving through a blizzard.

“It seems like in the snow, where you’re trying to get going and everything and … you accelerate hard expecting to blast through it, and you just wind up rocking back and forth, and not going anywhere,” he said.