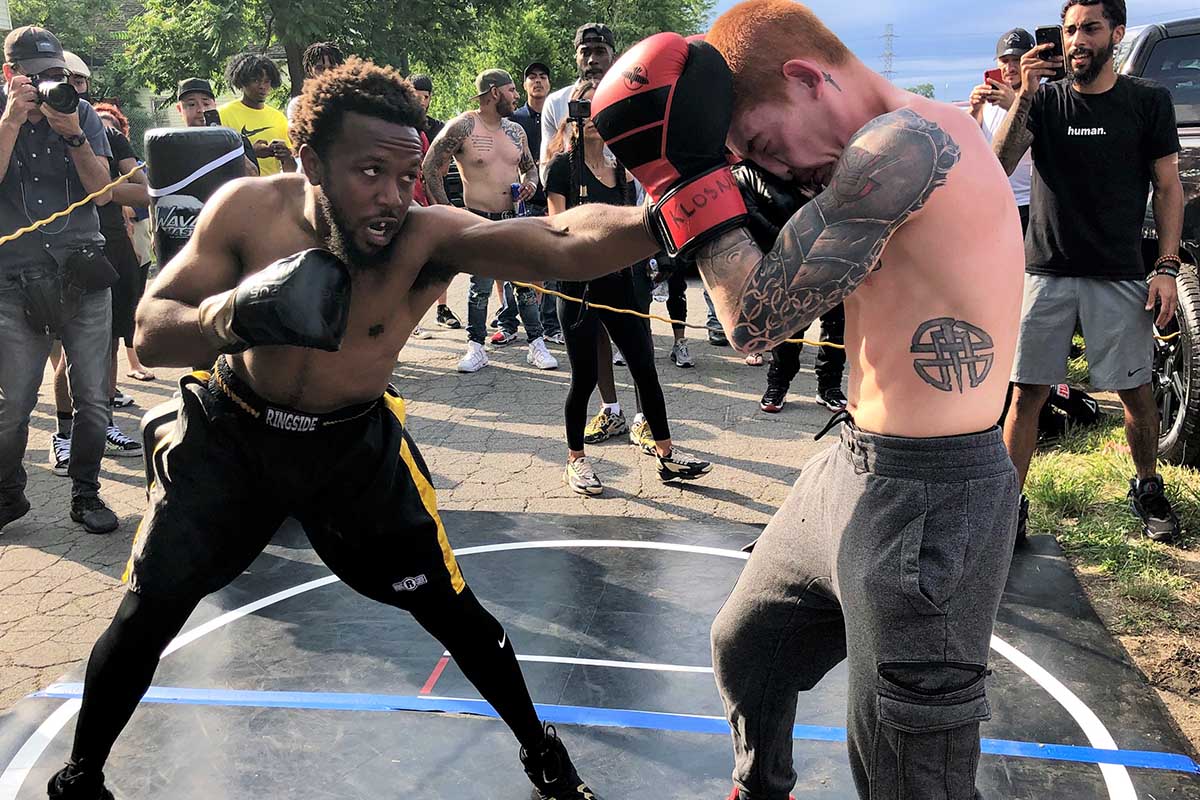 By starting time, early Saturday evening, more than 100 had gathered on the Delray block where a makeshift boxing ring had been set up in the street.

The ring is tiny. A wrestling mat serves as the floor. One corner of the rope ring is tied to the black rim of a Chevy Silverado. Hennessy bottles are being passed around freely in the crowd.  The smell of blunts in the air is thick.

Organizer/ringmaster/boxer Dwayne Taylor wasted no time to get the boxing matches underway.

“No guns, we’re out here to show people the better way,” the 23-year-old tells the crowd. “And, again, anyone who wants to box today, just let me know, we’ll set you up.”

Welcome to the latest edition of Pick Your Poison Detroit, possibly the toughest anti-gun movement in the city. More than a dozen will fight in this latest event of weekly boxing matches.

There is no money involved. No trophy. Just some degree of social media fame. Many of the fighters and some in the crowd echoed Taylor’s hope of sending an anti-gun message. 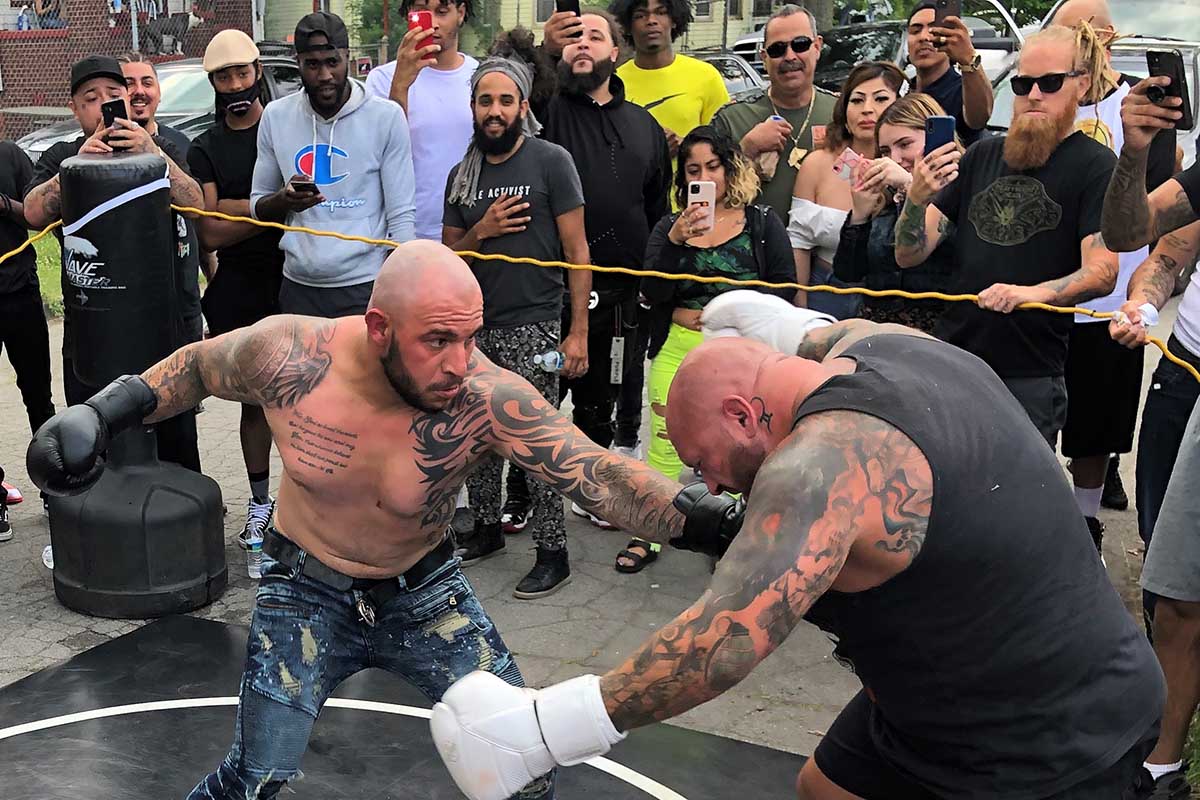 Jose Barba, in blue jeans, and Ryan Reys, in black shorts, at Pick Your Poison Detroit. Barba is a returning champion at the weekly outdoor event. (BridgeDetroit photo by Louis Aguilar) 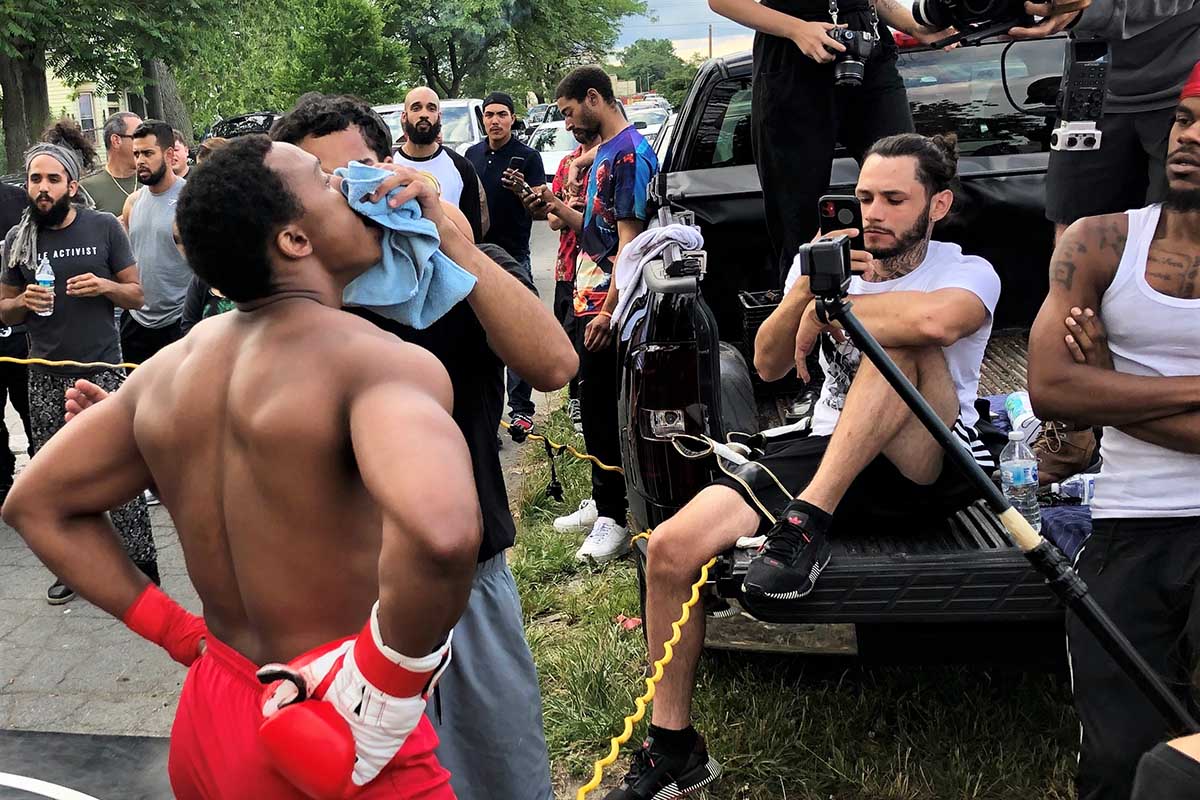 Organizer and boxer Dwayne Taylor attends to a fellow boxer with a bloodied nose. The weekly event gains more attention with each outing. (BridgeDetroit photo by Louis Aguilar) 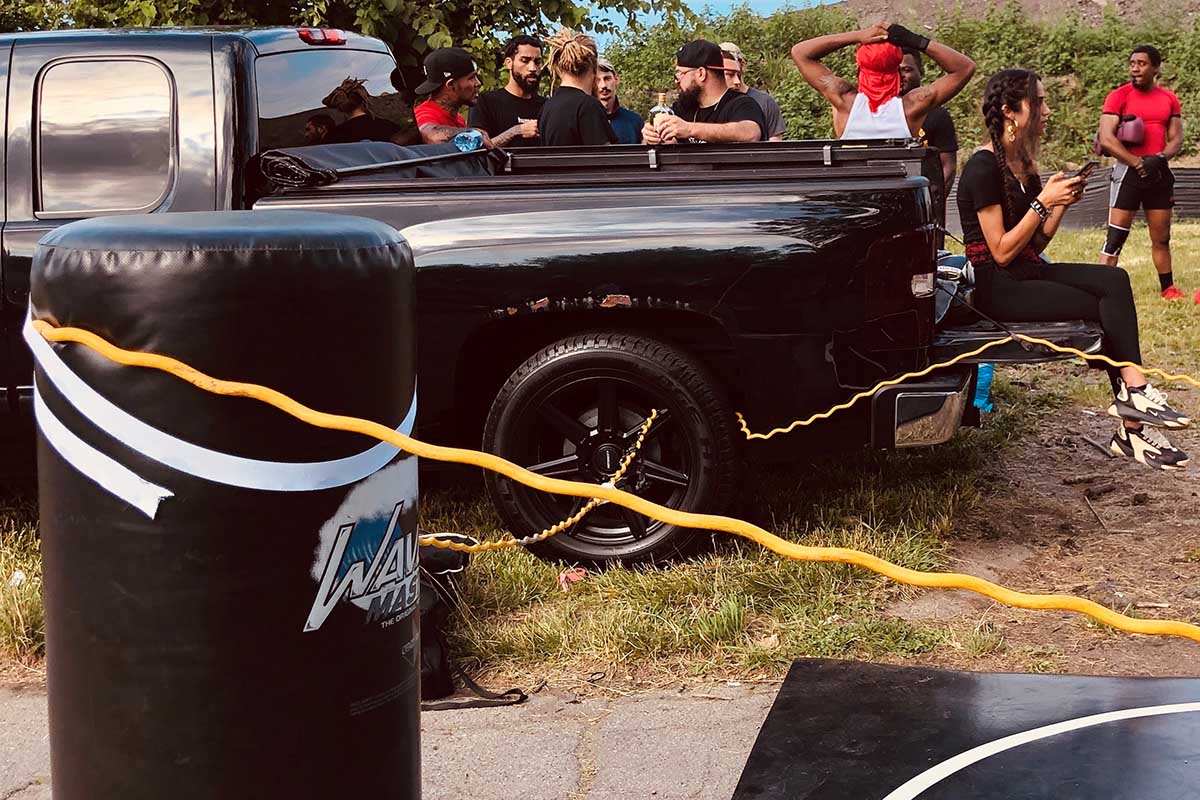 One corner of the boxing ring was tied to the rim of a Chevy Silverado. (BridgeDetroit photo by Louis Aguilar) 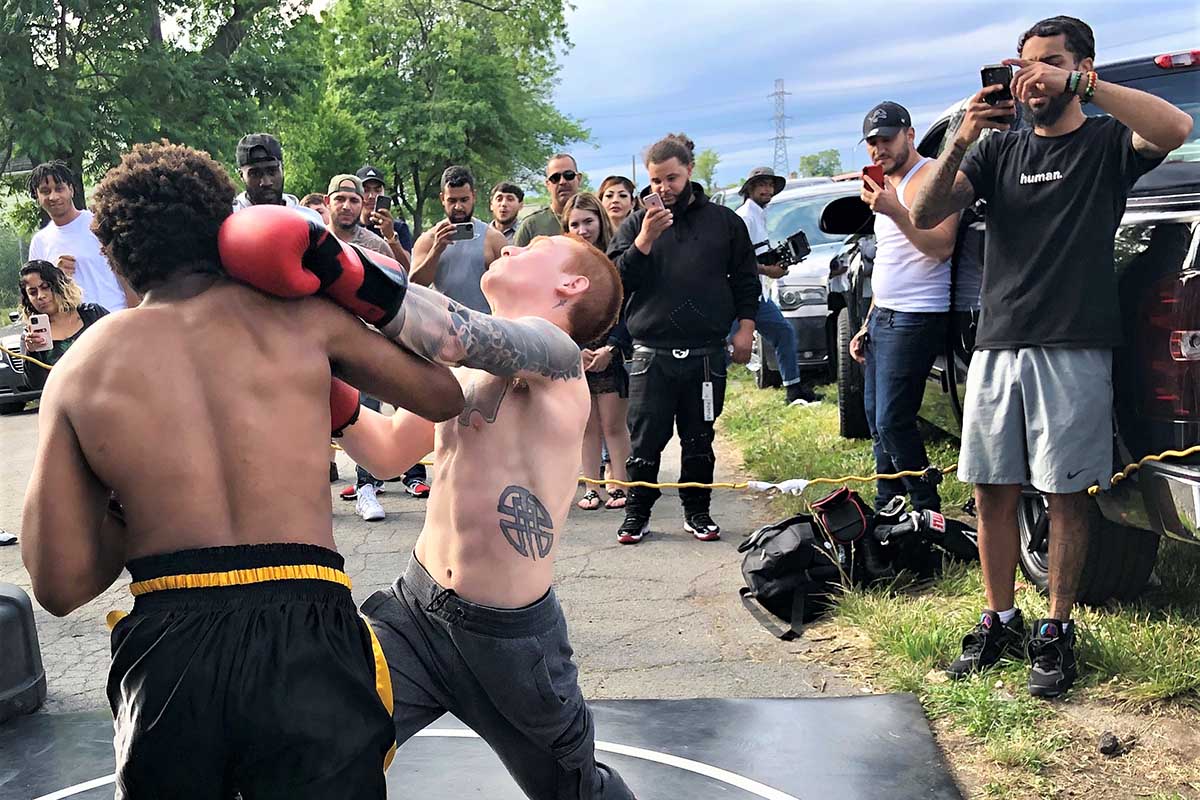 Dr’Kev Carree, in black shorts, lands a staggering punch against Cris Klosner at the Pick Your Poison Detroit boxing event in the Delray neighborhood. (BridgeDetroit photo by Louis Aguilar) 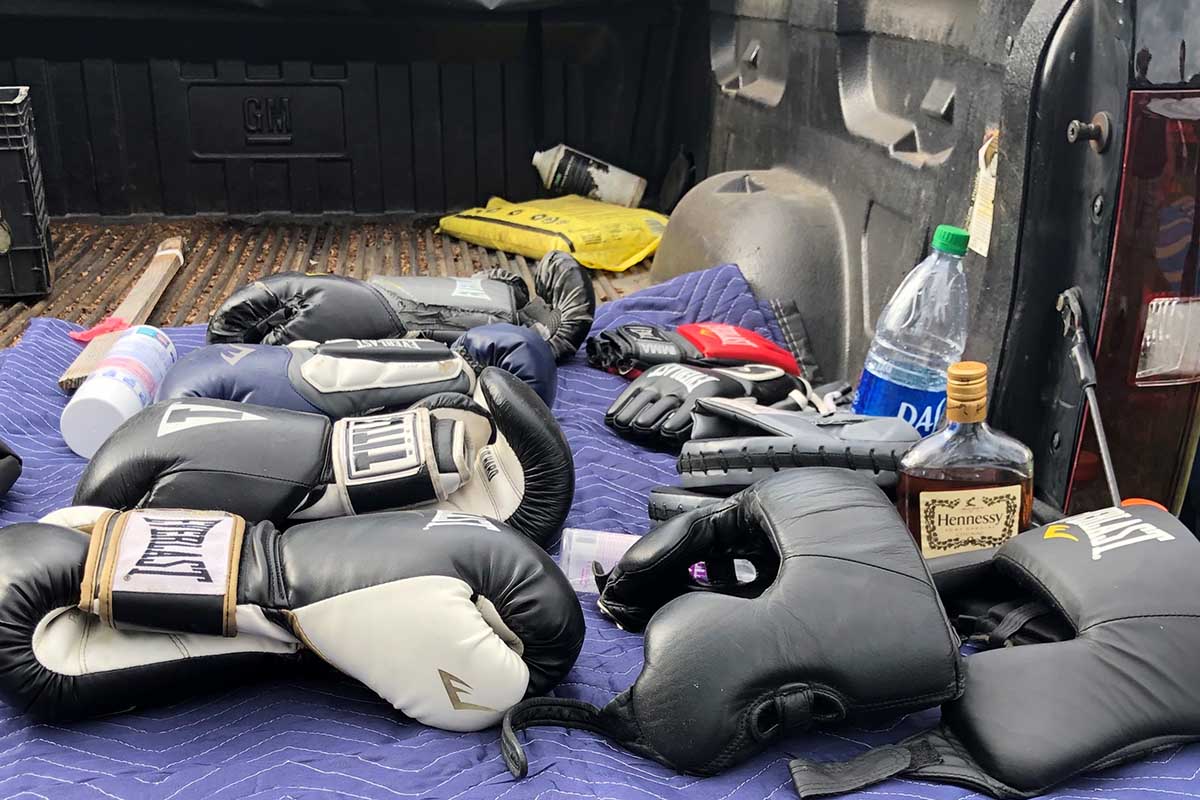 Boxing gloves and a bottle of Hennessy were available to willing participants at the Pick Your Poison event. (BridgeDetroit photo by Louis Aguilar) 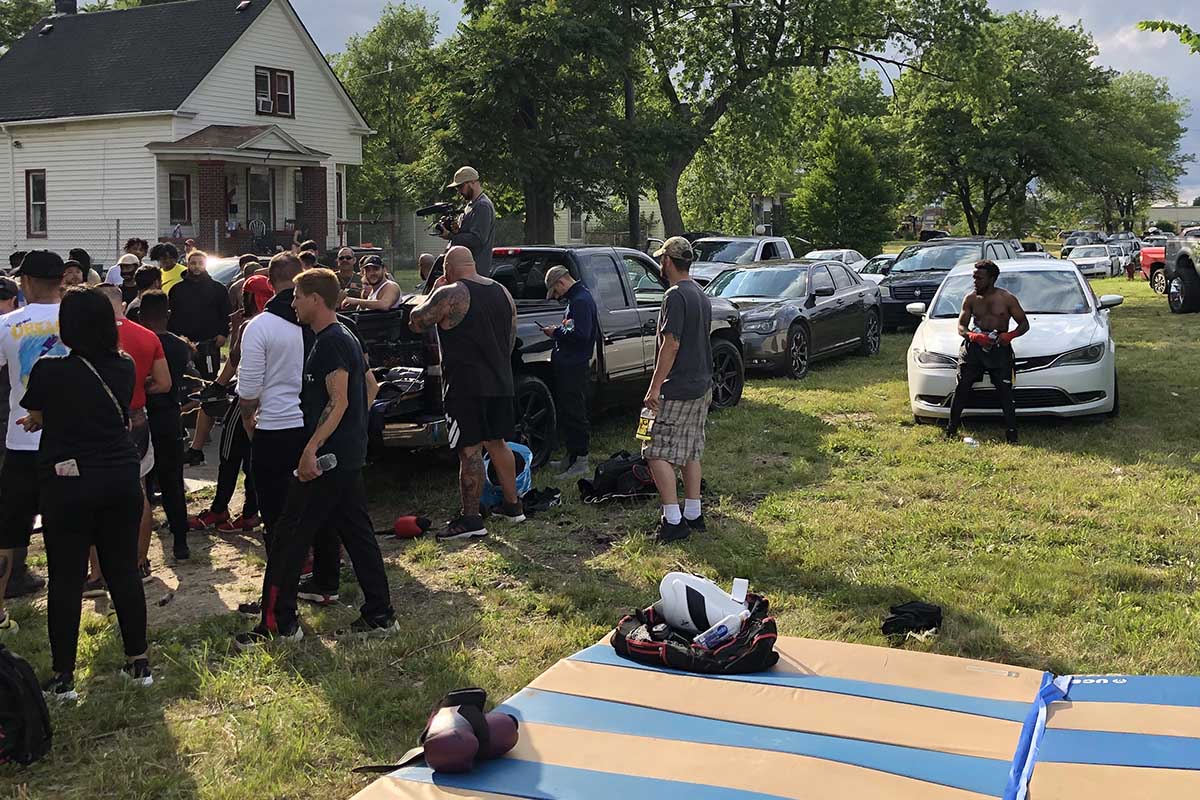 Boxer Dr’Kev Carree takes a break away from the crowd. The Delray street where the event is held is next to the emerging Gordie Howe International Bridge. (BridgeDetroit photo by Louis Aguilar) 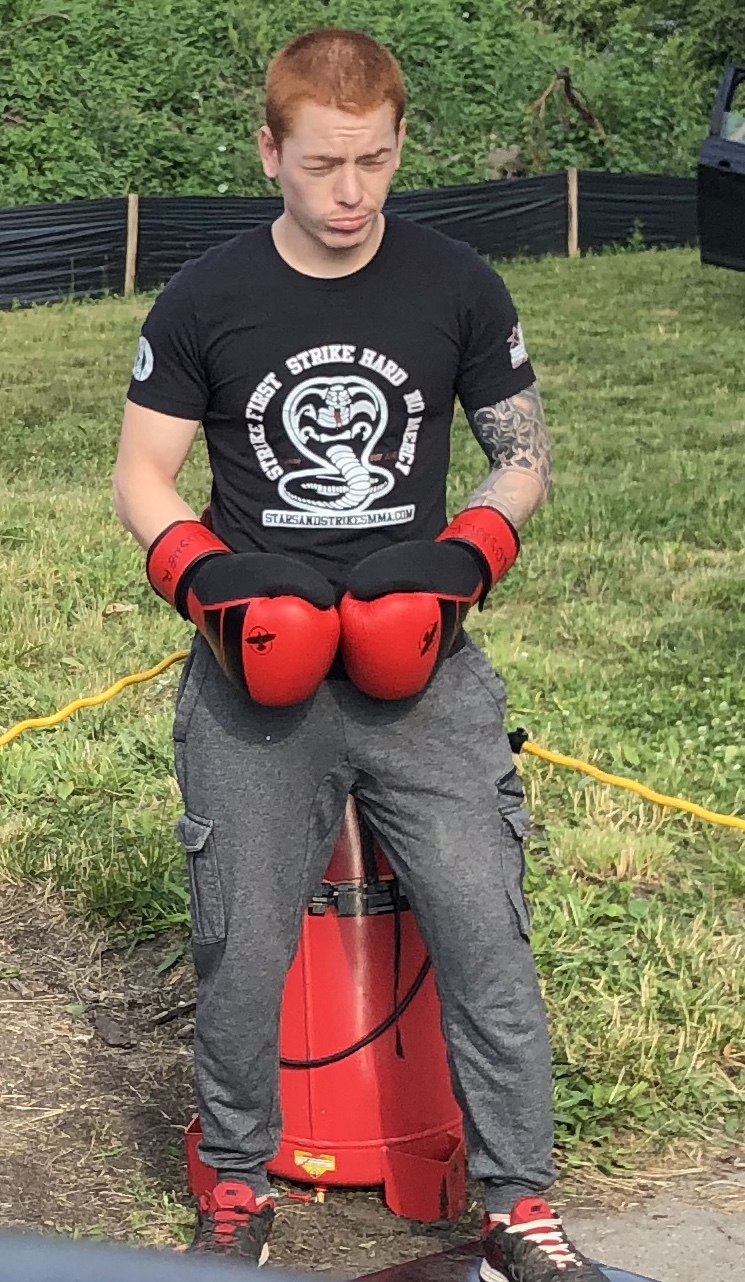 Boxer Cris Klosner, who trains as a mixed-martial-arts fighter, awaits his match with Dr’Kev Carree. (BridgeDetroit photo by Louis Aguilar) 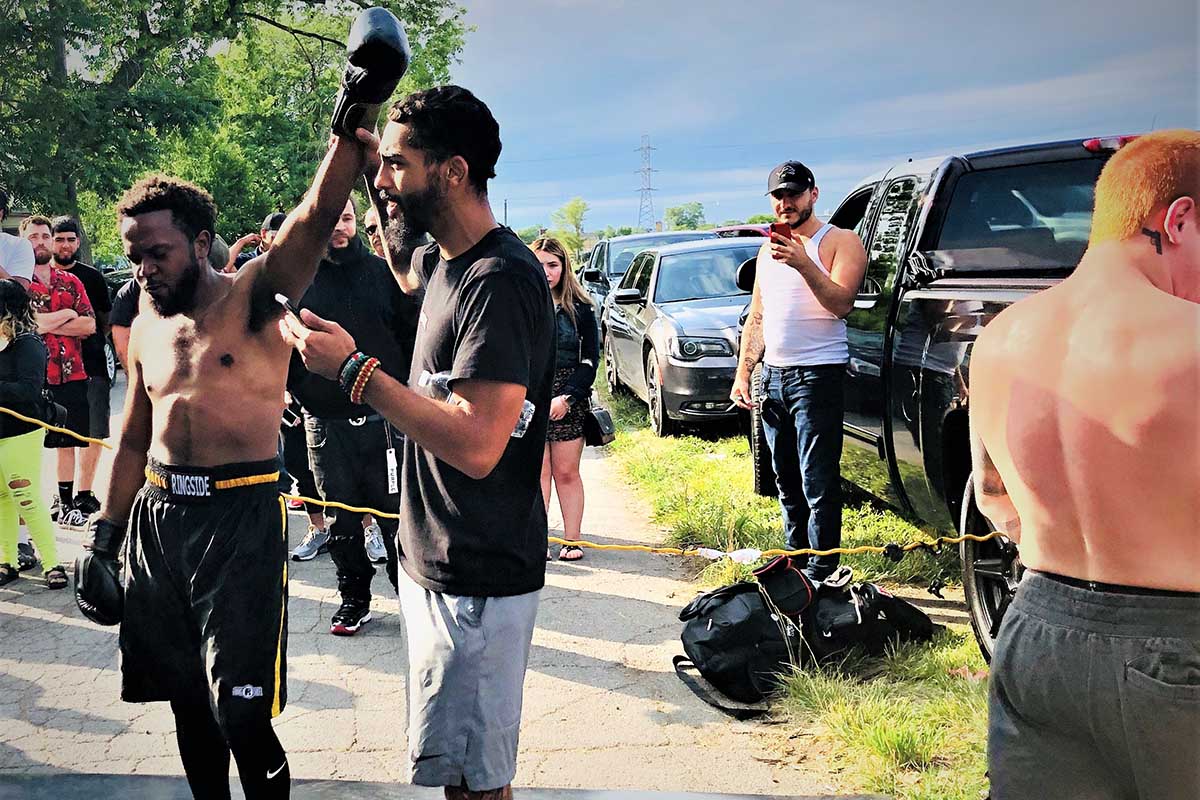 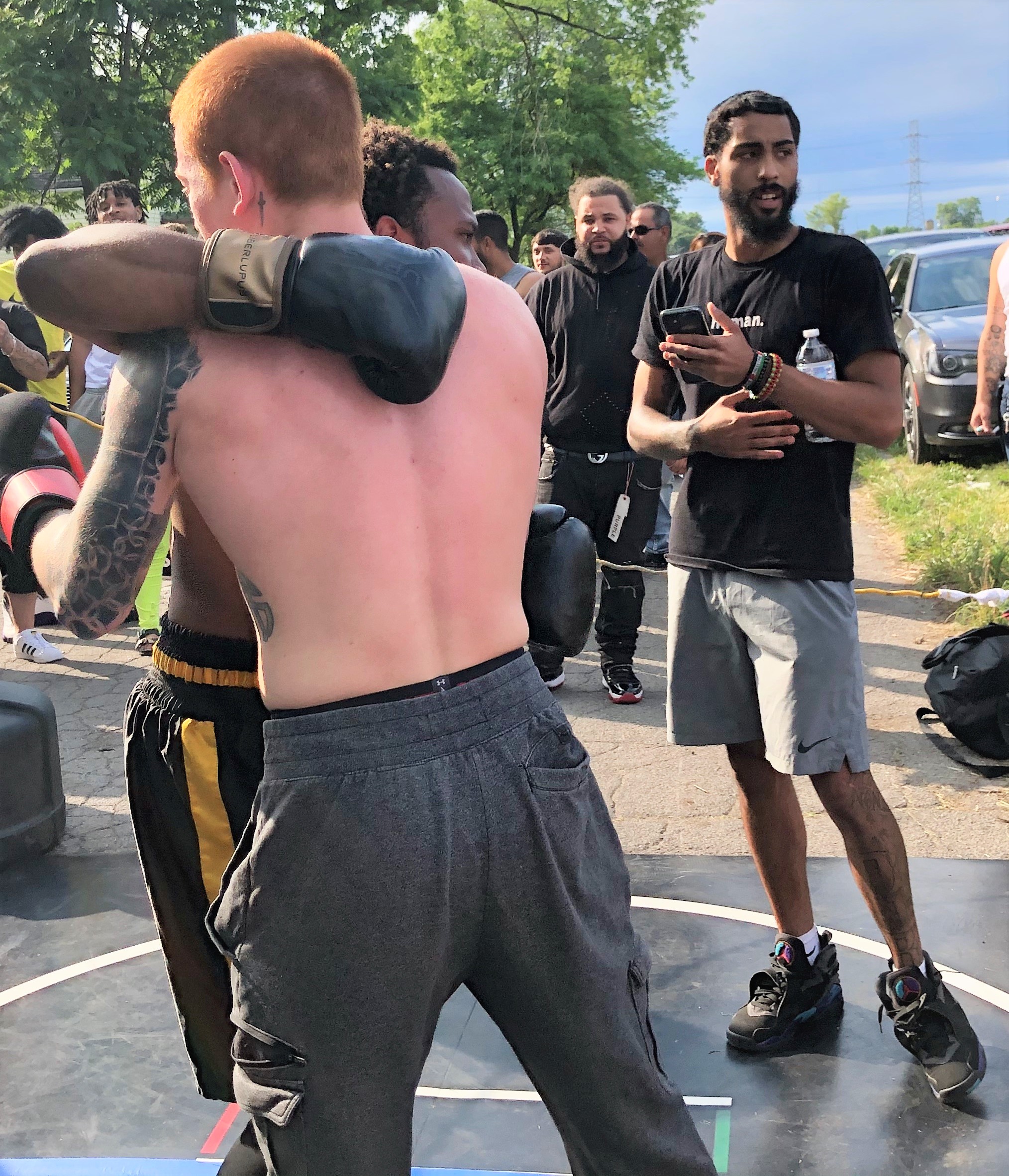 Like all the boxers, Carree and Klosner hug in camaraderie at the end of the match. (BridgeDetroit photo by Louis Aguilar)

The 26-year-old machine operator is a returning champ of Pick Your Poison. The last time he participated, he fought and won three matches. This time, he will box — while wearing blue jeans and bare-chested — against Ryan Reys, a mixed-martial-arts fighter from Westland. Reys appeared to be a good 6 inches taller and at least 20 pounds heavier than Barba. It was a slugfest. Reys went down three times in the first and only round. As with every match, the combatants bear-hugged after the match.

Detroit is a city that is no stranger to gun violence. Police and activists have taken multiple opportunities in the past year to urge residents to help end needless fatal and non-fatal shootings in the city.

Last fall, Taylor, a Detroit native, noticed the toll these shootings were having on his community. Taylor says when he was younger, everyone in his neighborhood settled disputes with their fists.

“Nowadays, it seems like everybody forgot how to use their hands and everybody’s so quick to grab a gun,” Taylor said.

Taylor said he’s lost more than a dozen close family members to gun violence over the past year. He says he saw how quickly situations became violent when people weren’t willing to find an alternative to using guns.

“Me and my cousin were talking about it last summer, and we both just kept saying how unnecessary it all was. And that’s exactly what it is, the shootings and stuff. Just unnecessary,” he said.

Taylor, who has been informally boxing since he was about 13 years old, says anyone who wants to fight can pick out someone they personally have an issue with or just a stranger who is willing to accept the bout.

“I ask everyone who comes to be honest with me as far as their skill level, so I can match them up in a fair fight. I wouldn’t want someone who’s been fighting for 10 years to fight someone who never put gloves on,” he said.

Many of the boxers and several attendees hope the event sends out a good message.

“I hope people see this is a positive thing,” said Justin Thomas, a 24-year-old truck driver and mixed-martial-arts fighter, who fought last week. “It’s good to be out in the community like this, to show people that there’s a better way to get your frustrations out.”

Luz Murillo and Magdalena Garcia, two cousins from Melvindale, were first-time attendees of the event.

“We saw it on Instagram, and it looked pretty amazing,” Murillo said. “Especially since the post on Instagram kept saying it was anti-gun, but learning how to channel your energies in a different way.”

Garcia said she wanted to support that message, too. In the fall, the two start college at Wayne State University.

Back when Pick Your Poison started last September, it was just Taylor, his cousin “Pac Man” and a handful of people in the neighborhood gathering to see people get their frustrations out.

Taylor brings several pairs of boxing gloves and headgear to each fight for people who don’t have their own. The fights are split into two-minute rounds, but Taylor says it’s up to the fighters how many rounds they last.

“They can go for a hundred rounds for all I care, as long as both fighters are still trying to go, I just let them do their thing,” he said.

Although he is unsure of exactly how far he wants to take the Pick Your Poison events, Taylor says he would eventually like to open a recreation center for kids in the area that has a boxing gym and more inside.