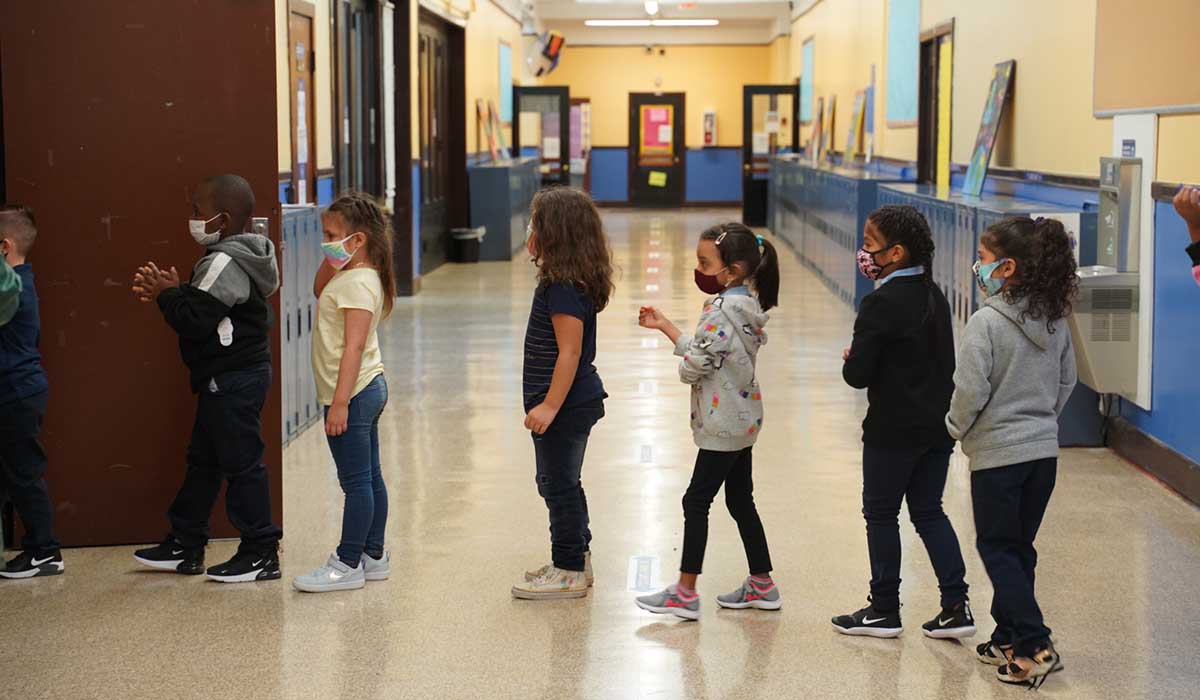 Students at Harms Elementary school in Detroit line-up for their first day of school. Today marks the beginning of school for Detroit Public Schools Community District's 51,000 students. In Detroit, about 80% of the parents chose to have their children learn online. (Photos by Valaurian Waller)

The students in the elementary classroom spread their arms wide as their teacher explained how to keep enough distance between them.

Their arms, Kristin Burnette told her first- and second-grade students, are like airplane wings.

“Show me your airplane. Don’t touch,” the teacher told the students at Harms Elementary School.

Tuesday marked the official start to the 2020-21 school year in Michigan. While some districts and charters had already begun classes weeks earlier, Tuesday was the first day for the 51,000 students who attend the Detroit Public Schools Community District, as well as for students attending more than three dozen other districts in metro Detroit. 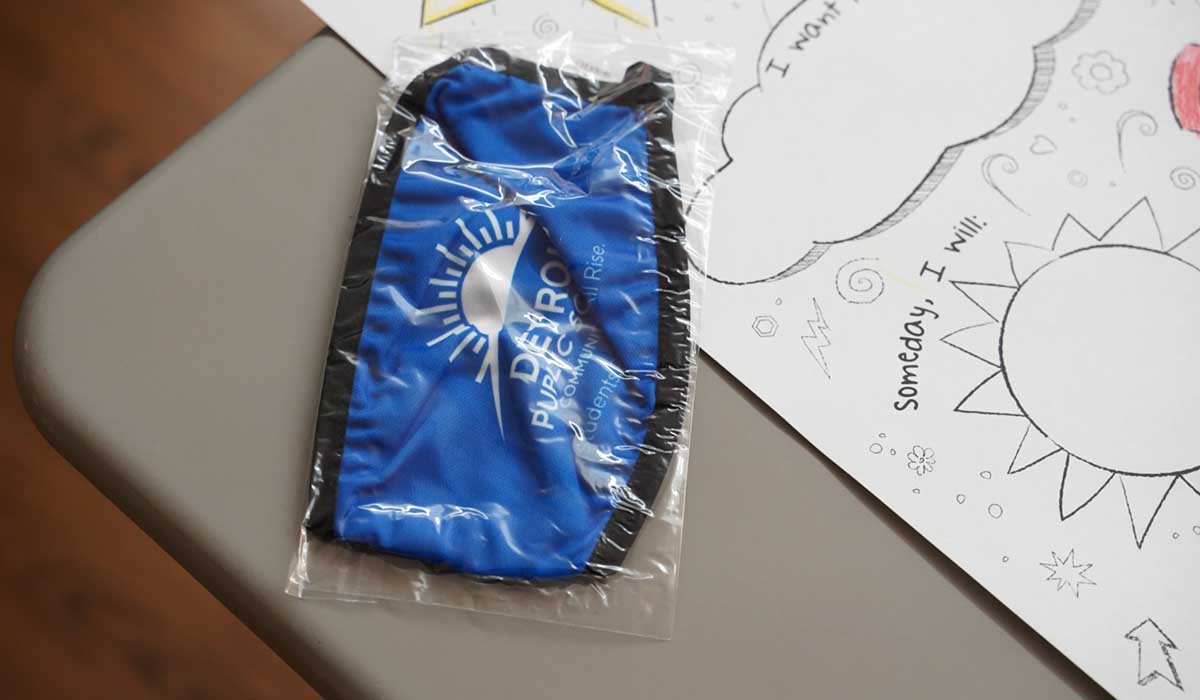 Detroit Public Schools Community District parents and visitors had to produce a negative coronavirus test to be admitted to schools.

Gray clouds and a steady rain greeted students and parents arriving at Harms. So did computerized temperature kiosks, hand sanitizer, and lessons on social distancing. There were a number of safety precautions in place. At Thirkell Elementary-Middle School, for instance, only two students are allowed at each lunch table, and they must sit side by side so they’re not facing each other.

For many of the students walking into school buildings across the district, it was their first time attending classes in person since March, when the coronavirus pandemic forced school buildings to close and a shift to remote instruction.

Kamya McKinney, a sophomore at Henry Ford High School, was one of about 90 students attending class at the school Tuesday. She said she prefers to learn face to face.

“On the computer I don’t really learn … you’re just giving us assignments that we gotta do instead of like teaching us how to do it.”

Still, all the social distancing in school buildings took some getting used to. Jeria McGhee, a Henry Ford sophomore, said she’s not sure how she’ll get to know her fellow classmates.

“We still can’t even get close to one another,” Jeria said.

The district gave parents the option to choose in-person or online instruction for their children. In addition, the district opened up learning centers in schools for parents who prefer their children complete their remote classes while in a school building supervised by an adult. The learning center at Harms was empty Tuesday morning, but at Burton International Academy, the center held a dozen students.

Detroit Superintendent Nikolai Vitti traveled to multiple buildings Tuesday, arriving at Harms shortly after 9 a.m. Vitti walked through the building and visited classrooms, weaving around the tiny desks and greeting some of the students with elbow bumps. One student dropped her drink on the floor, and Vitti helped clean up the spill.

Vitti said he wasn’t aware of any major problems at any of the district schools.

“I’m confident that we’re going to have a good year,” he said. “I’m excited to be in a school the first day. I’m excited to see children.”

Inside a third-grade classroom, teacher Karen Warner stressed the importance to the students of following safety rules.

“This is why you have to wear a mask,” she explained.

For parents dropping their children off, there were a few worries.

“I’m a little bit nervous,” Brenda Herrera said after dropping off her son, a second grader. “But I know he’s going to be OK.”

Like many of the parents who chose face-to-face instruction for their children, Herrera said she believes her son will do better in the classroom.

“It’s the best choice for him. He needs reading help,” she said.

Across the state, 86% of the schools began the year with an option for parents that included in-person instruction. In Detroit, about 80% of the parents chose to have their children learn online.

Learning in person meant a soggy wait in line before students got into the building at Harms.

“It’s raining. It’s cold,” parent Angelia Suppon said after waiting with her two children. The soggy wait was annoying, she said. But she was most concerned that she wasn’t able to enter the building to have a conversation with her son’s teacher.

That may be because the district is limiting visitors. Reporters and a photographer from Chalkbeat Detroit and BridgeDetroit underwent testing in the days prior to the first day to comply with the district’s policy for visitors.

Jennifer Johnson sent her daughter, a kindergarten student, back to school in person while keeping her older children at home.

“I’m not as concerned with my little one,” she said, referring to COVID fears. “I’m hoping for the best.”

At Burton International, students walking into the main corridor were greeted with signs reminding them that face masks are required and telling them to keep a safe distance.

Inside a kindergarten class, the teacher asked her 11 students why 6 feet of distance between them is important.

“Because we don’t want to get sick,” the students responded.

“They’re saying I miss the building, I miss the school, I miss the people. We miss them too, I’m a people person. Even when I’m having a bad day, by the time I leave the kids have done something that makes me smile.”