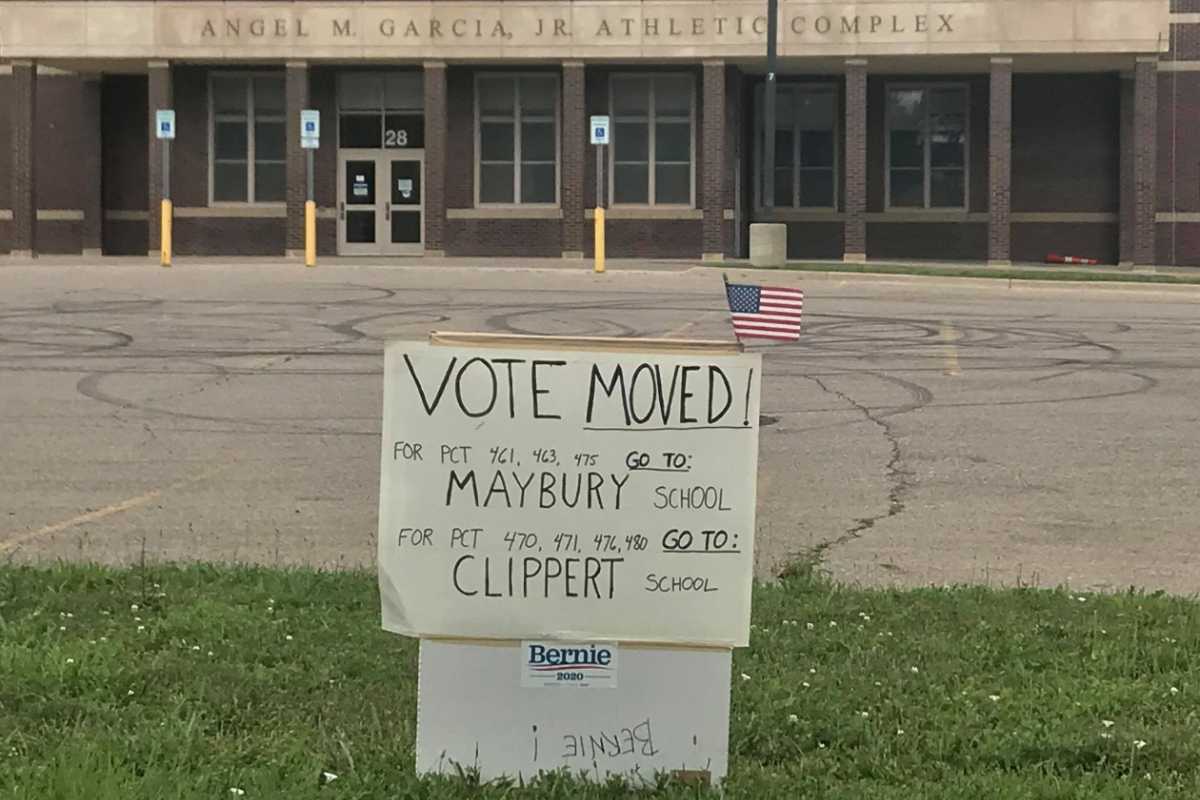 A sign posted outside of Western International High School in Detroit let voters know that this is no longer their polling location on Election Day.

Thousands of Detroit voters were confused this past Election Day  by last-minute changes in polling locations. Election Day can be hectic in Detroit, a city that experienced voting irregularities in 2016, and according to several reports this week, and in years past, of polls opening late. Yet, not knowing where to go felt like a new experience for some voters.

Paul Jones III lives in the 253rd voting precinct. Jones says he usually votes at John R King Academy on the city’s west side, but when he got there on Tuesday there was no one at the usual entrance.

“I went around to a front door that was open, and I walked in. I think the school may be being used for some type of summer program or food pickup, but someone asked how they could help me, I told them I was there to vote, and she said I just walked past the sign about the change,” Jones said.

The sign he walked past told him that his new polling place was Foreign Language Immersion and Cultural Studies School Academy — also known as FLICS, which is about a mile away.

“Since I drove, it wasn’t too much of an inconvenience. But it definitely added some time to my trip, especially since it was midday so I was between meetings,” Jones said. “At least three other voters at FLICS were confused about the change, and poll workers were sending a lot of people to different locations.”

A University of Michigan study found that 34 percent of Detroiters do not own or have access to a car. So while a polling location changing isn’t a big deal for some, carless Detroiters face a bigger disadvantage and possible disenfranchisement.

Rachel Thompson, a Detroiter who lives in the 476th precinct, was originally supposed to vote at Western International High School on the southwest side, but the location was changed to Clippert Multicultural Magnet Honors Academy, less than a mile away. Thompson didn’t learn of the change until she saw a handwritten sign on the street in front of the school, something she says she could barely read. She says she almost didn’t vote.

“The only reason I did is because there were other people I met at school who were also wandering around trying to figure out where to vote, too.  One of the families only spoke Arabic and had their very young son asking people where to go for them and translating,” Thompson said.

Thompson says the sign outside of the school — which is in a majority Latinx community — was written entirely in English.

Unfortunately these stories aren’t unique. Janice Winfrey, the Detroit City Clerk, estimates that as many as 40,000 Detroit voters experienced a change to their polling location from the March election to last Tuesday’s primary. Winfrey says the changes have a lot to do with concerns over COVID-19, which has devastated Black neighborhoods in Detroit since the state saw its first confirmed cases in March.

The pandemic forced the clerk’s office to change polling locations throughout the city within only a few weeks of the election.

Winfrey says some churches opted out of being polling places early on, but the big cause of confusion was that a number of schools in the Detroit Public Schools Community District opted out two weeks before the election because they are holding summer school programs.

“[These schools] told us two weeks prior, which is really difficult, but the law says we must notify voters by mail, and that’s what we did,” Winfrey said.

Chrystal Wilson, the Assistant Superintendent of Communications for the Detroit Public Schools Community District, says the district allowed the Clerk’s Office to use 74 school buildings for the primary and actively engaged employees and students who are of age to work the polls on election night.

“The only schools that were not used were summer school sites,” Wilson said. “We felt uncomfortable mixing the general public with our summer school students and employees due to the pandemic. This was clearly stated and agreed upon, we also offered a drive-up option instead. It is unfortunate that the office is attempting to use the district as the reason for its perceived challenges during the primary.”

Wilson says despite the controversy over having in-person learning during the pandemic, the schools being used for summer programs have taken precautions to ensure students and teachers are safe from COVID-19. Some of which the district wasn’t sure would exist if the buildings were used as polling locations.

“The staff reporting to summer school all tested negative to COVID-19. Students and staff were screened daily upon entering the building, no visitors were allowed in the building. Teachers wore masks and shields and all students wore masks, there were no more than 10 students in the classroom,” she said.

Wilson says there were classroom checklists that were closely followed and strict cleaning protocols. During the second week of summer school, a federal judge ordered that all summer school students would need a COVID-19 test to return to school on July 27.

Even with two weeks’ notice, Winfrey says that’s short notice to make changes to polling locations and notify voters. But she says she isn’t upset with the district, and she understands its position.

“Ultimately we are at the mercy of these buildings, and when they decide to close to us for whatever reason, we have to move on,” Winfrey said.

Winfrey says even with the short notice, her office went to local TV news stations, radio stations, newspapers, and their own website to try to get the word out across the city. Despite those efforts, there was a breakdown in communication, because some voters want more from the clerk’s office.

Alison Chan votes in the same district as Thompson in southwest Detroit. Chan says she would have liked to be notified more directly.

“Explore other ways of notifying people of changed polling places, maybe phone calls or text notifications,” Chan said. “I know the Postal Service has been doing their best, but they’ve been delayed and unreliable throughout the pandemic, and it’s only going to get even worse if we start getting wintery weather before November’s election.”

Jones believes there should be more up-to-date information on the city’s website about the changes, something Winfrey claims was available before the election.

“I found articles with the clerk talking about drive thru voting and a number of other things, but that info was not really available outside of news articles. There should also be a way voters can register their cell numbers to get updates about voting in their area,” Jones said.

Secretary of State Jocelyn Benson said on Election Day that she expects more and more people will decide to use mail-in voting for the November election. Benson didn’t respond to a request for comment about the polling location changes.

Did you have any difficulty voting Tuesday? What, if anything, do you think should be done differently for the November election? Let us know your thoughts on Twitter @BridgeDet313 and don’t forget to subscribe and donate!