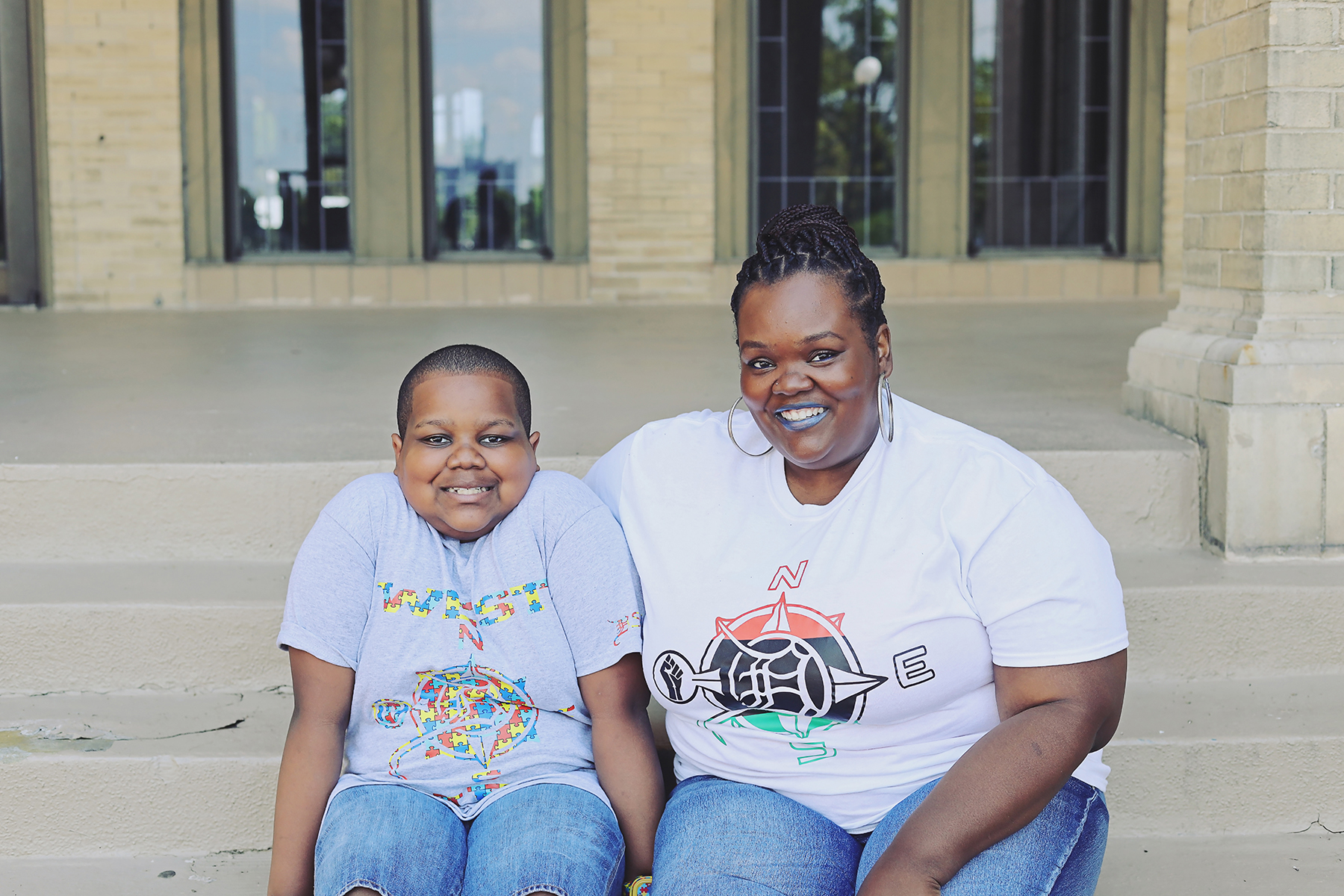 All photos by Cybelle Codish

Jaden Williams and Lorinda Whitfield manage the challenges of virtual therapy in a pandemic. Jaden is a sixth-grader at Pasteur Elementary School in Detroit.

If you ask Jaden Williams, he’ll tell you that there’s some benefit to the COVID crisis.

The sixth-grader at Pasteur Elementary School doesn’t like virtual programs. But, he said, “at the real school, when I’m in the class the whole entire day, I’m being stressed.”

He describes his classmates in single-word exclamations. “Loud. Distracting. Annoying.”

Jaden has autism, a developmental condition that involves noise sensitivity and communication difficulty. “He recognizes he’s different than the other kids in his class,” said Lorinda Whitfield, his mother. 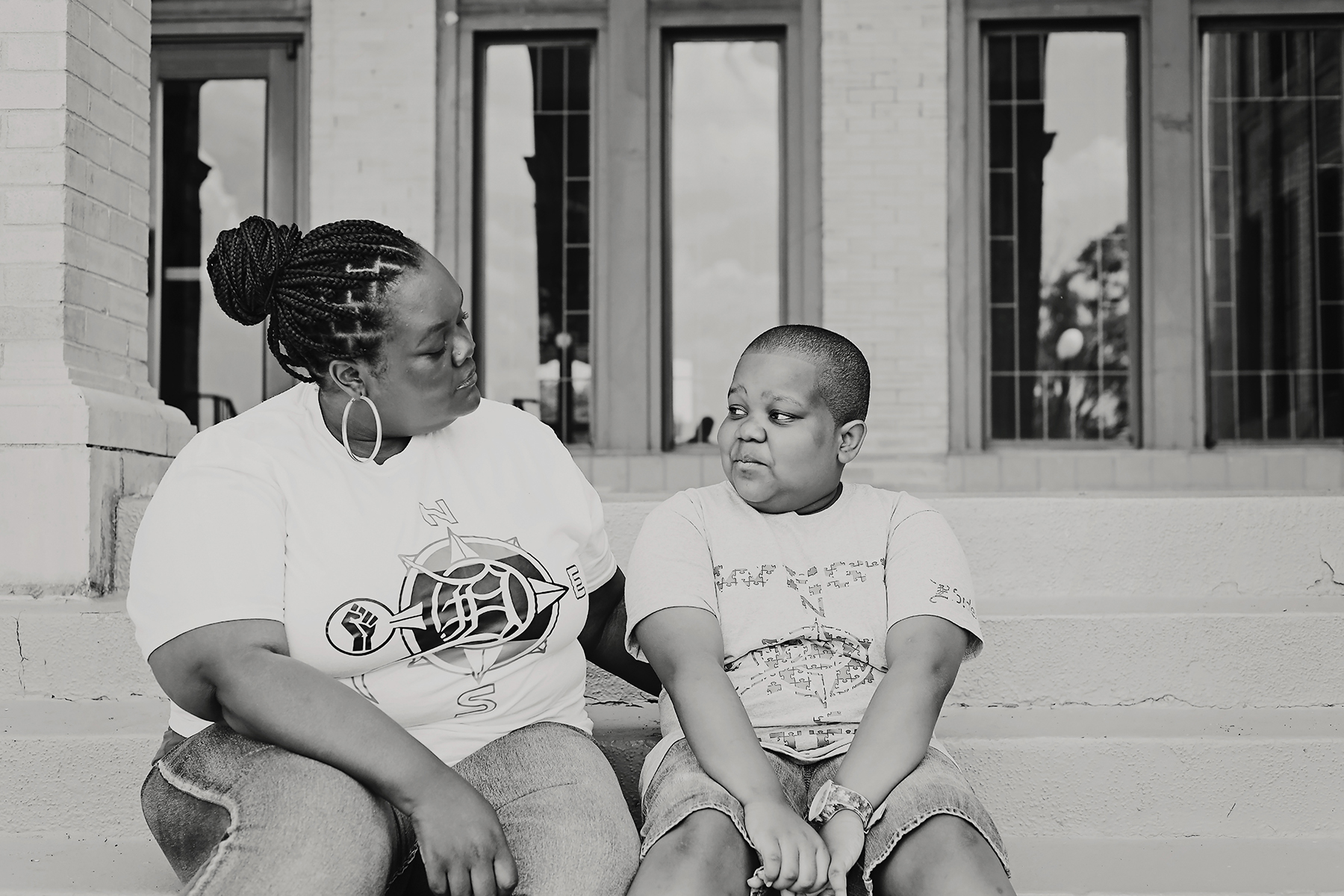 So Jaden likes being at home, even with a pesky little sister tagging at his heels. But it’s also been a massive disruption, and people with autism rely on routine for a sense of stability and wellbeing. And while Jaden loves Minecraft and videogames, virtual programs are extremely hard for him to concentrate on.

This year marks the 30th anniversary of the Americans with Disabilities Act, affirming that all people have the right to participate in civil society. But that’s especially difficult in the era of coronavirus and social distancing. In addition to thwarted school and caregiving, it’s more difficult for children and teens with autism to access therapeutic services or even get a diagnosis. Also, because sensory issues make it hard to wear a mask, it’s tough for families to leave the home.

“This is the busiest I can ever remember being,” said Colleen Allen, president and CEO of the Autism Alliance of Michigan. The Alliance, which offers a free navigator program that answers questions and connects resources, ordinarily receives up to 2,000 calls a year. This year, it expects many more, especially for complex cases that involve crisis and safety.“I think it is going to get much worse before it gets much better,” she added.

The COVID cataclysm challenged a statewide network of autism services that already had gaps, leading to long waiting lists for diagnoses and programs.

It’s been less than a decade since private and public health insurers have been required to cover people with autism. Early on, there weren’t nearly enough providers to meet the need.  This has improved somewhat in the years since, as, for example, colleges launched training programs.

But access still depends on geography. Care is far more available in southeast Michigan than the Upper Peninsula. There are also service gaps, including a lack of support for psychiatric crises. And in a city like Detroit, many families entitled to services backed by Medicaid have no idea it’s available. “They’re not getting there,” Allen said about outreach efforts.

This year changed care in ways that nobody could have predicted. Henry Ford Health System offered ABA and integrated speech therapy at three Detroit-area centers, and comprehensive in-person evaluations at the Henry Ford Autism Center in Hamtramck. “With the COVID, everything came to a blinding halt,” said Dr. Tisa Johnson, medical director of Henry Ford’s Center for Autism and Developmental Disabilities. 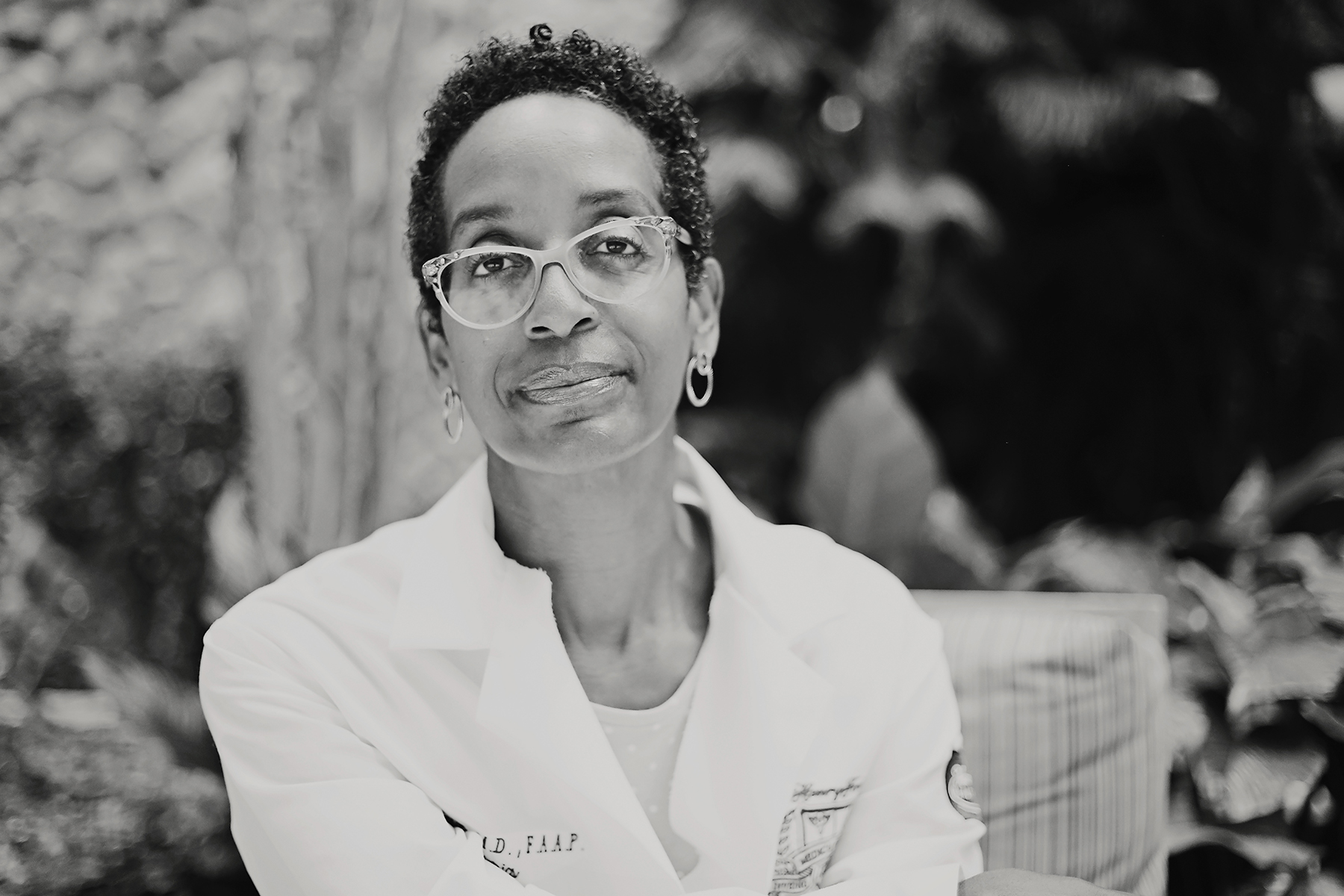 Providers pivoted to virtual therapy. “I think families found that virtual services, while they may not necessarily have been the same, may not have been optimal, were certainly effective for that bridge,” Johnson said.

Since autism is on a spectrum, children came to it from all different levels, so its usefulness varied accordingly. But even for those with intrusive behaviors, Johnson said, it still had benefits “because we’re now seeing the kids in their natural environment. Advice was real time.”

Allen, who founded the Hamtramck autism center in 2008, was more downcast about virtual services. “The majority of families are going to tell you it’s not working, or it’s nowhere near as effective as direct intervention.”

The exception is higher functioning children, who have techie sensibilities and already spend a great deal of time in front of screens. But while their transition might be easier, “those are the same kids who need socialization,” Allen said.

Johnson also said that needed social interaction isn’t replicable virtually. But the virtual forum is useful for caregiver training and support, and also for reaching people who can’t easily access clinics, including those from Up North or West Michigan who would otherwise make a weekend trip for a diagnosis.

This spring, after a month of not doing any diagnostic evaluations (it normally does about 25 of them), Henry Ford created a full-day virtual version. One challenge was that the evaluation tool it used was not validated for virtual use, or for when the test administrator wears a mask or face shield. That meant shifting to a new diagnostic tool, on top of adapting to the technology.

But a significant benefit to the new virtual reality is that it’s helpful to see children at home with their own toys, families, and pets.

“You really see very nicely how they naturally interact,” Johnson said. “We’re not reliant on parents to give a history, or their interpretation of behaviors. I mean, you see it.”

Finding balance is a process

Nonetheless, many children are experiencing behavior regression. “It’s not just skills they lose, but their behavior is deteriorating, on top of parents trying to work their jobs and parent other kids,” Allen said. While families can ride it out for a bit, it gets worse. In early summer, several months after COVID hit Michigan, the Alliance had a significant uptick in calls from caregivers: “I don’t know what to do.”

This rhymes with Carrie Cogswell’s experience. She lives in Redford with her husband, mother-in-law, daughter, three grandchildren, a dog, a cat, and a rabbit. Jacoby, 11, has high-functioning autism — what used to be called Asperger syndrome — and struggles with anger, instability, and sensitivity.

Routine was critical: the regularity each evening of the kitchen’s last call, family Bible study, bedtime, and morning school pickup from their father. That structure collapsed, and also cut off the ABA therapy home visits that he’d just begun. Cogswell worked from home full-time while homeschooling three children. Jacoby got anxious on the computer, to the point of punching it.

“Jacoby was in anger mode all the time,” Cogswell said. “He constantly stated he’d kill himself or try harming himself.”

After six weeks of fighting for it, Jacoby’s mom got him the right program, which included a psychiatrist who prescribed a medicine (a small dose of the antipsychotic drug aripiprazole) that changed everything. “He’s happy, he’s loving, he comes up to you,” Cogswell said. He still has whiny days, but he’s learning self-soothing techniques.

“He’s the person we knew he could be,” she said.

Like Jaden, Jacoby is entering the sixth grade this year but struggles with virtual programming. This fall, he’s scheduled to be in school two days a week and online the rest. Cogswell will work with him 28 hours a week on schoolwork, on top of her full-time job for a law office.

Jacoby will also get two Zoom meetings with school social workers each week, and a monthly Zoom with his psychiatrist. But ABA therapy — which would have been provided at home — is still uncertain.

With virtual programming, Allen expressed concern about technology access, especially among lower-income families in Detroit. “Many of those kids have not had the opportunity to engage in anything — anything! — virtual, let alone a special education program,” she said. Many families decide they can’t worry about it, since they don’t see any way to solve the problem.

For these families, Johnson said, it was established from the start that Henry Ford’s centers would give them priority when they returned to the clinic. Providers also made an upfront effort to work with people on finding a way to participate. Some were able to plug in with smartphones; others made arrangements with family members who had bandwidth. Behind-the-scenes coordinators walked people through the technology step by step. In the end, Johnson said, while it required a lot more preparation, it didn’t turn out to be as big a barrier as she expected.

The complexity of parenting in a pandemic

For 13-year-old Amari Todd Caver, who has autism, it’s not just day-to-day frustrations. “There’s two viruses: racism and COVID-19,” as he likes to tell people. After the killing of George Floyd in Minneapolis, he and his mother Deanna went to Black Lives Matter protests.

These days, she’s still advocating for him, both in helping him learn self-care and getting an education. Thanks to an immersion school, Amari Todd speaks Japanese, and while “he’s not a fan,” he gets weekly teletherapy through Starfish Family Services, in lieu of home visits.

But Caver also worries about how her 6’1” son and his behaviors — which are hardly helped by the stressors of the COVID era — will be perceived by others.

“There are certain things he has to make sure that he does when he leaves this house,” said Caver. “Because people act on fear, and they react before they ask questions. … They’re not asking if you’re autistic. They see a black kid coming toward them.”

If he’s loud, she tells him, though he might not mean anything about it, others might see it as a threat.

Learning self-soothing techniques, then, is not only a matter of wellbeing; it’s survival, especially in this unsettling time. In Amari Todd’s case, he relaxes by playing with his black Labrador and watching “South Park.”

The good news is that many service providers have opened up, though, mindful of safety, they are at limited capacity and adapting their more distanced social interaction. Many families have continued with virtual services, “clearly because they have found some benefit,” Johnson said.

The Henry Ford Autism Center has added diagnostic days to help meet demand, and more providers, intrigued by the virtual platform, are interested in participating.

For therapists, Allen believes the No. 1 goal should be helping young people wear masks. It’s key for them to attend school and otherwise leave the home, effectively liberating the whole family.

For those relying on virtual education and services, “the most fundamental approach to online platforms is to make the parent a therapist,” Allen said. With basic information and tools, providers should “teach them very functional skills to work with their child,” with emphasis on “empowering parents for day-to-day survival,” from bedtime routines to play.

Some new tools might make virtual programs easier. This week, a Michigan startup called Hedgehog Health is launching a Kickstarter for a multi-sensory fidget mouse. Founded by Parker Lynch, a former teacher, the tactile mouse was in development pre-COVID but may be more useful now for those with sensory issues. Hedgehog expects to eventually launch a mouse that engages all five senses through vibration, light, sound, a treat-dispensing function, and the push-button release of the scent of an essential oil.

“The more people I talk to, the more different needs come out — overlapping diagnoses [with symptoms] that can be helped,” Lynch said. Not only people on the spectrum find the tool useful, he’s learned, but also, for example, children with fetal alcohol syndrome who face similar challenges. 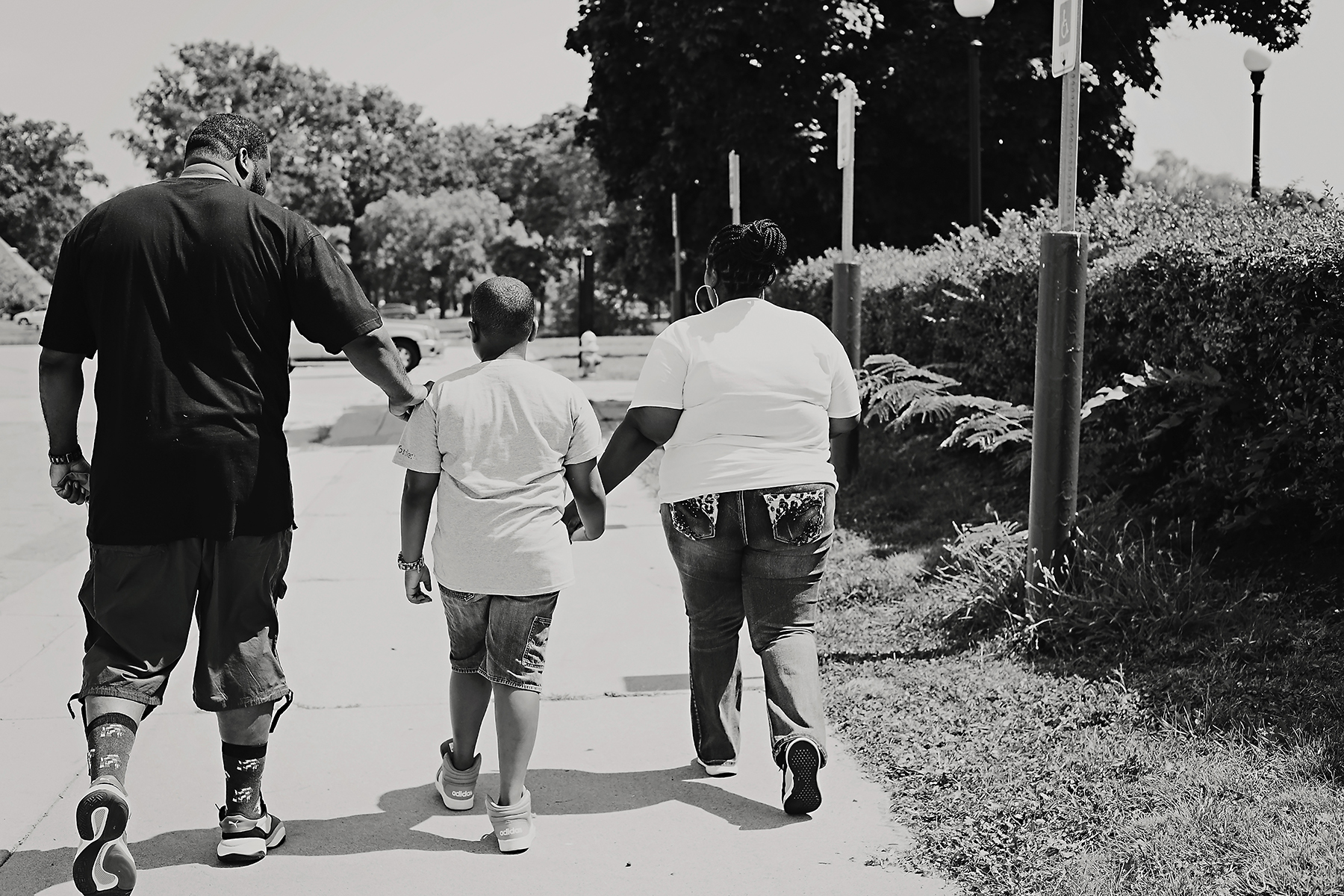 Going forward, the Autism Alliance is focused on funding the providers of behavioral health services that directly affect families. With a state budget crisis, “we’re in the battle of lives,” Allen said.

She’s also pushing to make sure special education isn’t lost in the pitched debate about schools, from the equitable distribution of federal CARES Act funding to compensatory services for children who’ve experienced learning loss. “Schools are obligated to implement individual educational plans,” she said, which are standard for students with special needs. “It doesn’t matter if we’re in a pandemic.” Allen is concerned that many families “don’t know what they don’t know,” including what questions to ask and what laws may be violated if they are denied services.

Allen also offers this to families: “Let go of the guilt. We’re all in a different place.”

Read more articles like this about how Detroit youth are navigating during the coronavirus pandemic.