The posse of law enforcement agencies who introduced Operation Legend in Detroit this week often put it bluntly why the city needs 56 federal agents and up to 15 new Detroit Police officers.

“The U.S. Department of Justice will not sit on the sidelines while murderers spread violence in our neighborhoods,” Matthew Schneider, U.S. Attorney for the Eastern District of Michigan, said in his opening statement to the press Wednesday.  He was flanked by representatives from the ATF,  DEA, FBI and U.S. Marshals Service. Most of the federal agents repeatedly used the phrase “senseless gun violence” in their brief comments.

The idea of a federal task force fighting crime in Detroit is not new, officials said.  “We come together today in the same way we’ve done for many years. We identify violent criminals and get them off the streets,” Schneider said.

Many things are not the same this year. Operation Legend is a Washington-driven idea surrounded by such skepticism that Mayor Mike Duggan and Detroit Police Chief James Craig issued a joint statement that made it clear the task force was not their idea. 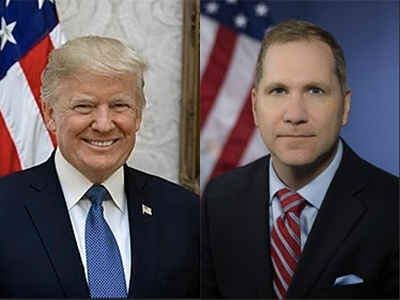 President Trump last week announced Operation Legend, which adds 56 agents in Detroit. “The U.S. Department of Justice will not sit on the sidelines while murderers spread violence in our neighborhoods,” Matthew Schneider, U.S. Attorney for the Eastern District of Michigan, said in a news conference Wednesday, announcing the arrival of agents.

“Today’s announcement of additional staff for those departments was not initiated by the City of Detroit,” read part of the statement. Neither the Mayor nor Craig attended the task force news conference.  “So long as those staff are used in the continuing effort to enforce federal laws on illegal gun trafficking & gang violence, [Detroit Police] will continue its strong partnership with those agencies,” the joint statement said.

For over 100 days, marchers in support of the Black Lives Matters movement have taken to the streets demanding reforms against police brutality and racial injustice. In Portland, Oregon, the White House has sent camouflage-clad troops that have repeatedly clashed with marchers.

That led to concerns the same thing was about to happen in Detroit. Federal officials refuted that notion.

“There are no federal troops coming to Detroit or any other area in Michigan to interfere with protestors,” Schneider said. “Some people in our state have falsely and recklessly stated that the efforts of our partnership to protect our communities is instead a secret effort to stop the right of Michiganders to protest.”

Gov. Gretchen Whitmer said on CNN Wednesday night she didn’t want the federal task force to get involved with Detroit marches. “If they are going to come in and supplement local police forces in combating crime, that’s fine. But if it is something different than that, that’s not going to be OK,” Whitmer said.

Michigan Gov. Gretchen Whitmer says she doesn’t believe that Attorney General William Barr did not know about death threats against her from protesters after she issued stay-at-home orders at the beginning of the pandemic.

Whitmer, along with many other city and state leaders, are urging continued federal aid in combating the COVID-19 pandemic and the subsequent economic downturn. On Wednesday, the death toll from the coronavirus in the U.S. officially hit 150,000 — the worst in the world, by a large measure, while 1,483 Detroiters have died after contracting COVID.

Detroit is grappling with a Depression-era level unemployment rate. Four in 10 working Detroiters remain laid-off from their jobs, according to monthly employment data by the U.S Bureau of Labor Statistics and an ongoing economic survey by the University of Michigan. On Friday, the extra $600 a week that laid-off workers have been getting during the pandemic may end.

But negotiations on a new coronavirus relief bill hit an impasse on Capitol Hill on Wednesday, leaving no clear path forward even as millions face a sudden drop in unemployment benefits.

“People don’t have jobs. They don’t have a way to take care of their families,” said Alyasah Sewell, an associate professor of sociology at Emory University in Atlanta.  She’s also founder and director of the Race and Policing Project, which provides research on racial inequalities in the criminal justice system. “We have to think about what the pandemic actually did to our economy. And then to add insult to injury, you have the issue of police violence and police oppression. In some sense, it’s a vicious cycle.”

“Senseless gun violence is taking over the streets of Detroit,” said James Deir, ATF Special Agent in Charge. “Whether we want to admit it or we want to stick our heads in the sand at the end of the day, statistics do not lie.”  On Wednesday night, police were investigating a possible quadruple shooting in a drive-by on the east side.

Under the leadership of U.S. Attorney Schneider, the federal agents will work with Detroit Police  to get illegal guns off the street and prevent gang violence. Operation Legend is actually an enhancement of initiative that started in December, officials said. Since then, 469 people  have been arrested, officials said.

“This is a flood of more resources that we haven’t seen before,” Schneider said. “The violent increase here in Detroit is significant.”

Here’s a breakdown of the 56 federal agents in Detroit:

There will be $1.4 million to support Operation Legend. Another $2.4 million has been made available to Detroit Police to hire 15 officers. Another $100,000, officials said, will be used toward “acoustic gunshot detection technology and equipment.” That technology is used to  detect the sound of a gunshot that is picked up by transmitters and send the information to the police dispatch center.

“We got a cadre of agents moving at their own expense. We’ve got folks coming out of the academy,” said ATF Agent Deir. “At the end of the day, Detroit matters, everybody matters. Everybody should be able to live in our community, and live in a place where they can walk down the street safely with their child and not fear that a stray bullet is going to affect their lives permanently. And take a loved one away.”

Operation Legend will have particular focus on four police precincts that have seen sharp rises in homicides and non-fatal shootings. Those precincts are the Second, Sixth, Eighth and Twelfth. This independent MotorCity 911 website has a map of the city’s police precincts. This city of Detroit site has contact information for each police precinct.

Here are the percentage increases in homicides and shootings so far this year: 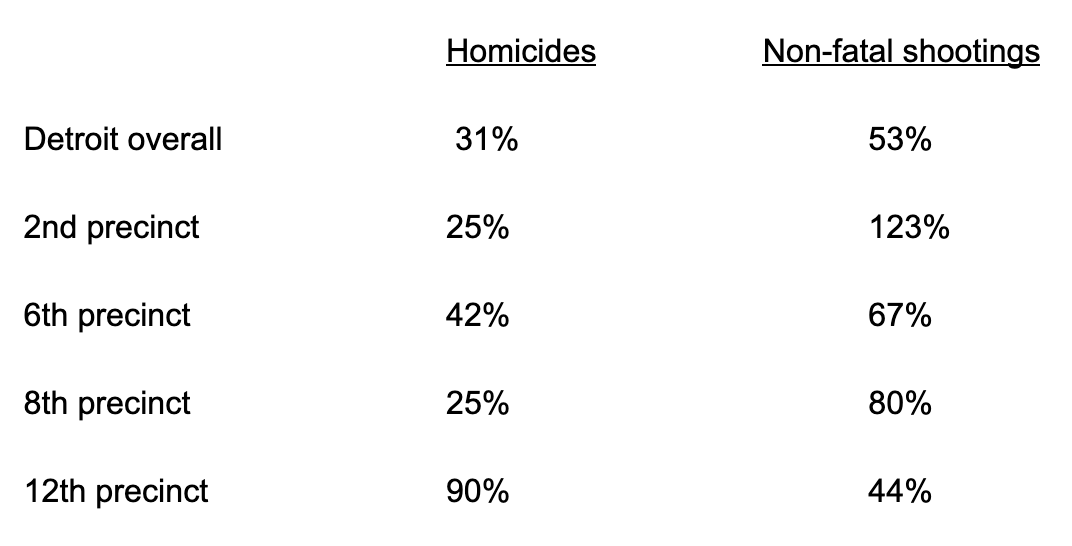 The 2019 Crime Statistics are provided by the Detroit police.