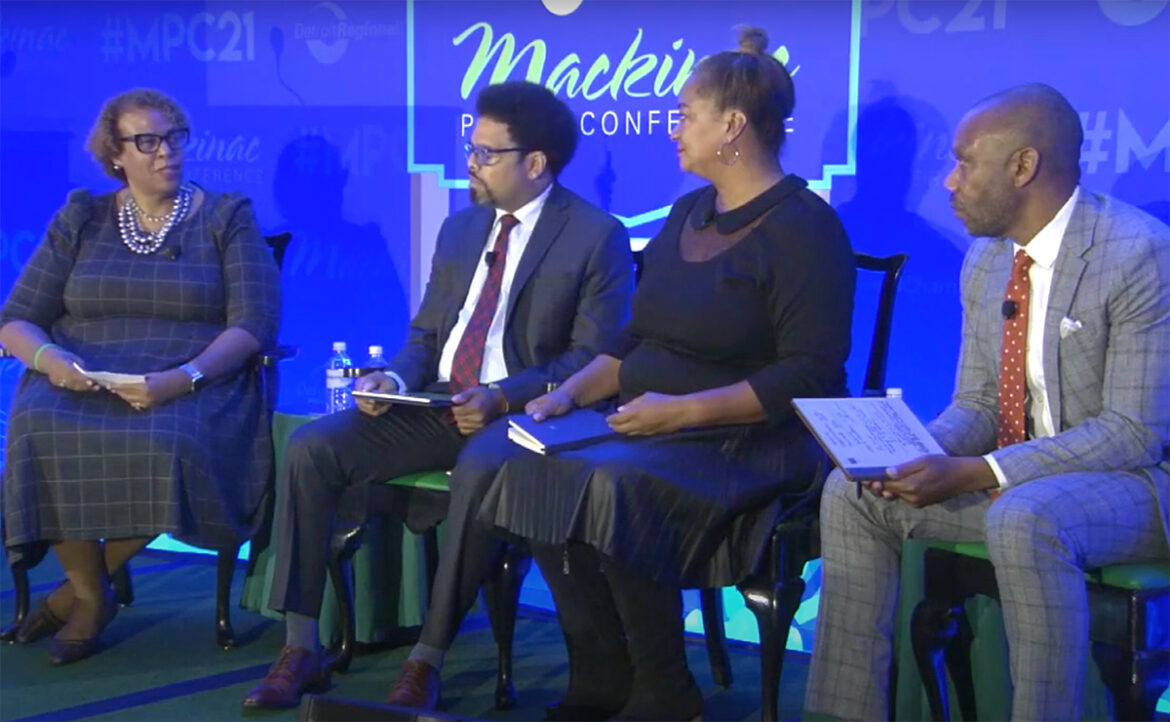 The all-Black panel pushed conference attendees to think about the impact of direct investments and funds in people and communities. (Detroit Regional Chamber screenshot)

Day two of the Mackinac Policy Conference began with a session that didn’t overanalyze quantitative data on impoverished Michiganders. That information has been analyzed for years.

A contentious topic, reparative policy would force the government to redress systemic policy that has violated human rights through financial means and administrative changes. The context of the conversation at the policy conference relied heavily on recognizing the outcomes of historical decisions that have racially divided the state to begin thinking about how to increase economic equity. Panelists prioritized Michigan’s dwindling Black middle class and the ongoing racial wealth gap.

Recognizing these topics within the context of economic issues will help the state move forward into economic prosperity, according to the panelists. Nationally renowned expert Darrick Hamilton of the New School for Social Research and Andre M. Perry of the Brookings Institution joined Kim Trent from the Department of Labor and Economic Opportunity and Anika Goss from Detroit Future City.

Trent moderated the discussion with an introduction from a report by the Kerner Commission. The report was released 53 years ago and anticipated the unequal economic divide between Black and white residents.

The all-Black panel pushed conference attendees to think about the impact of direct investments and funds in people and communities, using examples like low-paying jobs in Detroit, disinvestment in Black neighborhoods and a lack of access to capital for Black-owned small-businesses within city limits.

The state’s sole focus can’t be investing in businesses and areas guaranteed to have high growth — Michiganders need to be concerned about the economic prosperity of their neighbors, too.

“The bottom line is, we’re in the wrong paradigm if that’s our sole measure for success. We should do it because it’s the right thing to do, plain and simple,” Perry said.

Changes to public policy that support the Black middle class could generate billions, if not trillions in revenue.

“We can afford this; poverty is a political choice,” Hamilton said.

Reparative policy is currently being considered in Detroit. City Council President Pro Tem Mary Sheffield introduced a resolution this summer that called for local government to acknowledge its own history of racially motivated, unjust policies and practices.

Whitmer’s goals include getting 60 percent of the state’s adults to a post-secondary accreditation by 2030, low- to no-cost child care for 150,000 Michiganders within the next three years, and to become a Top 10 state for household income, job and revenue growth.