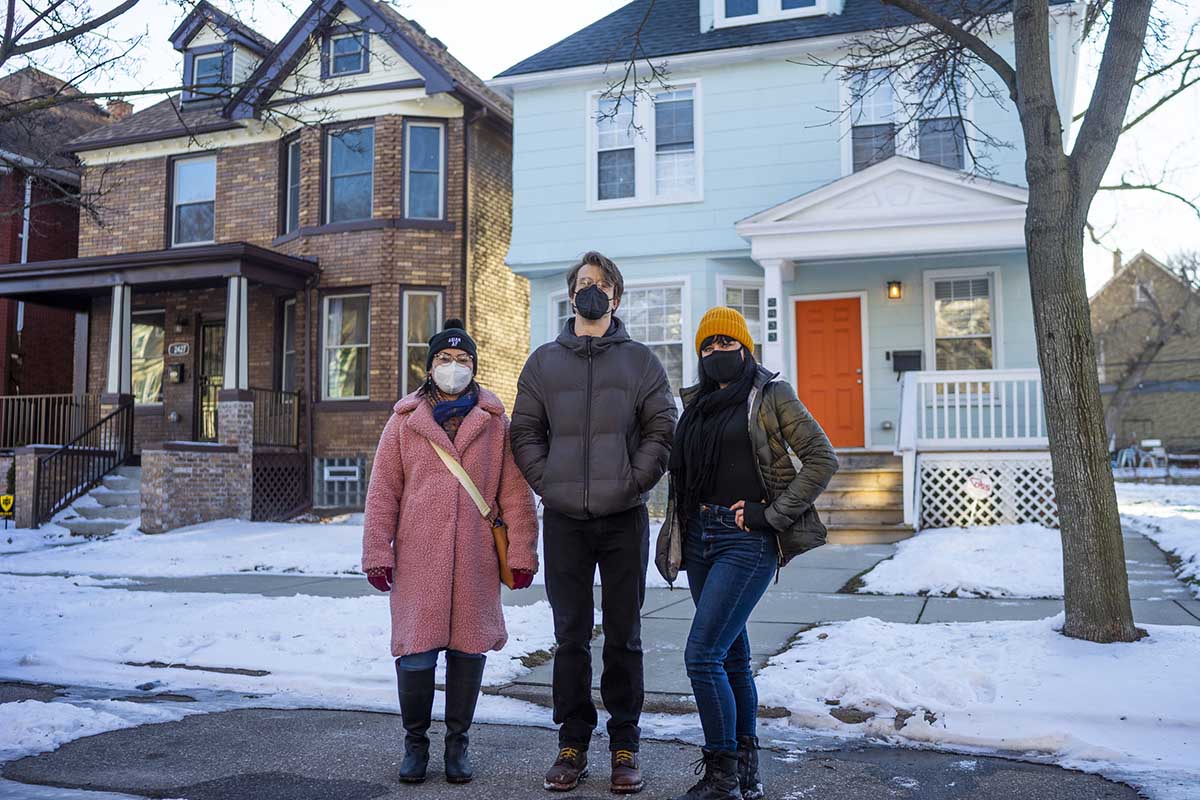 Laura Misumi, Geoffrey Leonard, and Jo Messer pose for a portrait in front of Misumi and Leonard's former apartment last week. The trio are plaintiffs and part of a tenants union and have filed a lawsuit against two developers alleging discrimination against Black tenants. (Detroit Free Press photo by Antranik Tavitian)

A trio of Detroit residents — two white and one Asian American — say they’ve been denied the opportunity to live in a racially integrated community, and they’ve filed a lawsuit over it.

A suit like theirs is uncommon, but not unheard of, legal experts say. The standard of proof plaintiffs must present in such a case is high, experts say, and it’s hard to say how it will do in court.

Last summer, 16 residents in part of the Islandview neighborhood, near West Village and Belle Isle, met to talk about ways to support one another during the COVID-19 pandemic. They realized nearly all of the residents gathered were white, except for one person who was Asian American. And that was part of a bigger problem in their neighborhood, they say.

“We are white folks in a majority Black neighborhood,” said plaintiff Jo Messer, a member of the Villages Property Tenants Union and the only current tenant in the suit. Two other plaintiffs are former renters.

They say they tried to meet with their landlords to discuss some of their concerns but were denied. It culminated into a lawsuit filed last month in the U.S. Eastern District Court of Michigan, where the plaintiffs allege that defendants discriminated against Black renters by not leasing homes to them, and refusing to make repairs.

There are no Black plaintiffs in the suit.

Among their allegations: Nearly all of the 24 units in a Jefferson Avenue complex are occupied by white tenants and defendants didn’t lease homes on Townsend and Beals Street shown to Black prospective tenants.

The complaint also alleges that a Black family needed repairs in their home, and withheld rent for two months in an effort to get those repairs. They eventually moved out. Landlords brought an eviction action against the former tenant and a $6,000 money judgment, according to the lawsuit and Detroit court records. In a text message to the Free Press, the former tenant declined to comment.

Non-Black tenants have requested repairs that were made and withheld rent without eviction actions, plaintiffs allege.

Defendants named in the lawsuit include three companies and their co-owners, Alex DeCamp and Reimer Priester.

“Though they wish that number were higher, saying they discriminate against Black people is not only an offensive accusation but a demonstrably untrue one,” he said, adding that the person who runs the day-to-day operations, handles property tours and is in charge of the rental application and approval process, is Black.

“VPM has never had the intent or desire to change the racial demographic of the neighborhood or to displace Black families,” Austin said. “Their goal has simply been to restore vacant properties and be a positive impact in neighborhoods for all Detroiters.”

Toyia Watts, president of the Charlevoix Village Association, is a lifelong Detroiter who lives in her family’s Islandview home. She said her neighborhood is changing and it’s happening right before her eyes.

The plaintiffs are taking a “stance,” Watts said about the lawsuit, and it’s not about their race because “right is right” and “wrong is wrong.”

The plaintiffs allege that the defendants violated the Fair Housing Act and “unlawfully deprived” them of the “social and professional benefits of living in a racially integrated society,” according to the court filing.

“Many people do not know that the (Fair Housing Act) has two goals,” Brian Gilmore, director of the Housing Clinic at Michigan State University’s College of Law, said in an email. “One is stopping discrimination in housing but the other lesser known goal and often avoided goal is promotion of a diverse society, in this instance, a racially diverse community.”

He pointed to a 1972 case where white plaintiffs sued, alleging that they were denied the opportunity to reside in a diverse community,  and the Supreme Court ruled they had standing, broadening the scope of who can allege housing discrimination.

“If you ask me, the fact that white Americans are getting involved on this level is needed much more in these cases and I welcome it,” he said.

Still, Gilmore said the standard of proof is high and that it is hard to say how successful these types of cases are because most settle or the parties reach an agreement to resolve their issues.

Steve Tomkowiak, executive director of the Fair Housing Center of Metropolitan Detroit, said in an email that the plaintiffs must show they lost the benefits of living in an integrated community.

“The plaintiffs will need to prove that the actions of defendants sought to transform their neighborhood into an all-white or predominantly white community,” Tomkowiak said.