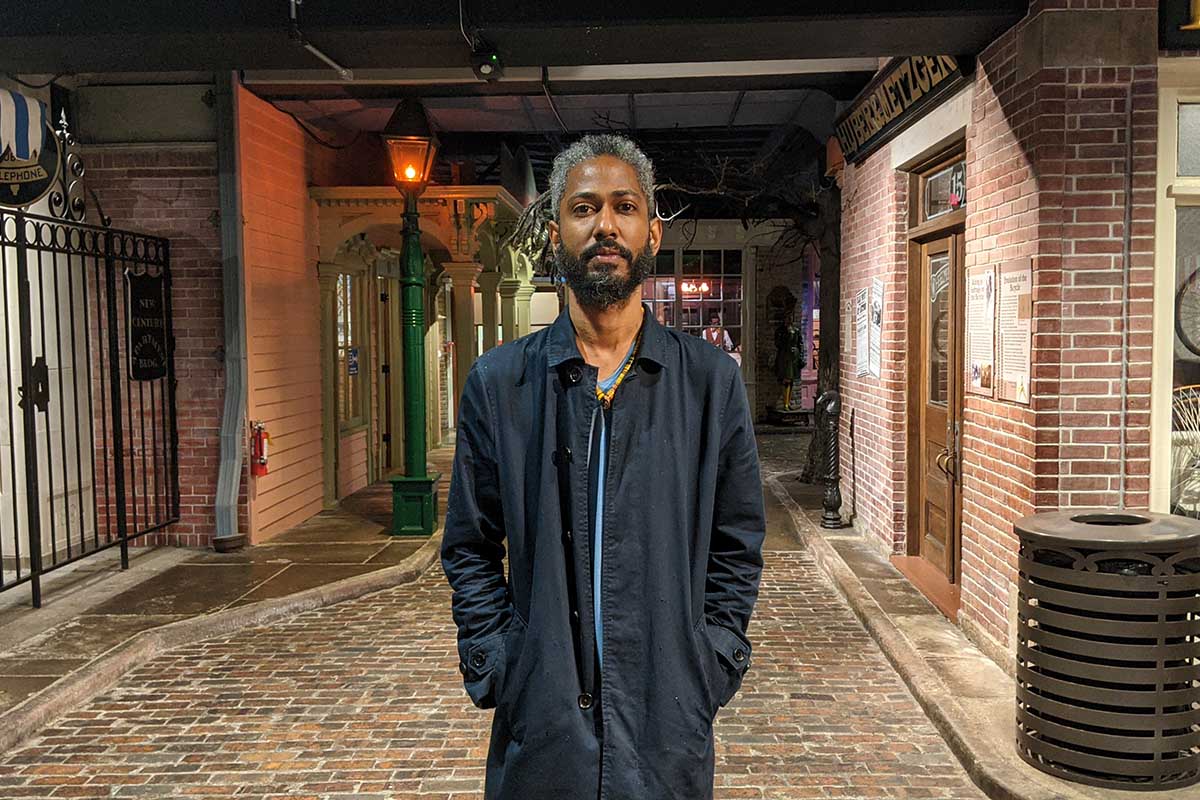 Joel “Fluent” Greene at the Streets of Old Detroit exhibit in the Detroit Historical Museum in Midtown. He recently released his fifth book of poetry. (BridgeDetroit photo by Bryce Huffman)

This interview was edited for length and clarity.

Detroit poet Joel “Fluent” Greene has just released his fifth book of poetry, “The Detroit Poems,” and sat down with BridgeDetroit for an interview at the Detroit Historical Museum.

Greene said his current work is “all about Detroit,” and he wants readers to “feel great about being from here.” 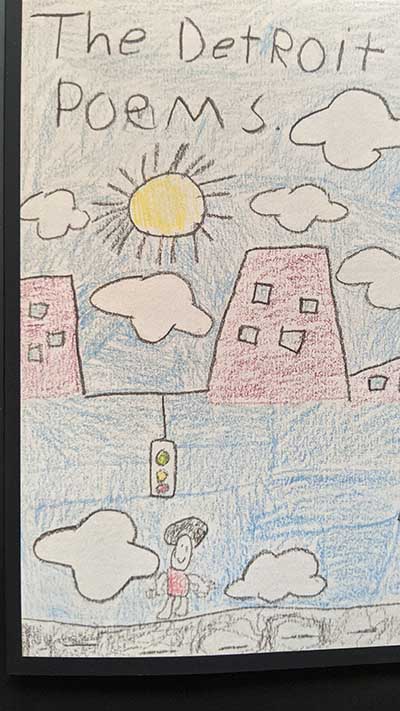 Greene also discusses his influences, Joy Road, celebrating Black women and how he roped his kids in on his latest storytelling endeavor.

His daughter, Livy, drew the art for the book’s cover, which he used because she gave the city “a very neighborhood lovely, beautiful, peaceful feel.”

His son wrote a poem about his experiences as a Black man in Detroit.

“He’ll be 20-years-old next month, which is wild,” said Greene. “I love it. It’s simple, sweet, and it’s very honest of him and his experience here.”

Greene believes it is important to help his children, and Detroit youth, understand their place and value in a changing city.

“Don’t let anybody make you feel like you don’t belong in a space,” Greene said. “There’s a lot of that going on in Detroit right now. A lot of issues over who owns these spaces, who belongs where, and we belong everywhere. I want my kids to feel just that empowered about the city, about the fact that they belong here. They were born here, literally born in Detroit.”

Your first poem in the book is all about Detroit women. You actually say that Detroit women are your favorite part of the city. Why?

I feel like, for one, our society is dope when women are dope. Detroit women are the best. They’re just, they’re funny. For one, they don’t take a lot of stuff. They’re honest, they’ll really let you know how they feel about you, whether that’s good or bad, and they represent us so well.

I had to be honest. My mama, my grandmother, my sister, Black business women — the women from the city of Detroit. These are the women in my life that I love and care about.

In poems like “I Was Here” and “Don’t Move to Detroit If You’re Afraid of the Natives,” you compare and contrast what the city was and is. Tell me about this.

I’ve lived in Midtown for some years now, a few years, and I’ve lived in Detroit the majority of my life. I’ve seen the changes. I used to hang out downtown when I was hosting Cafe Mahogany (in the 1990s) so I remember how the neighborhoods have changed, and I see the attitudes of the people that move here. I feel the lukewarmness, a lukewarm vibe you get from the white people.

(People) have to know there’s nothing wrong with Detroit being 80 percent Black. It’s a beautiful thing. In any other place, you have any other race of people that’s 80 percent of (the population) in an area, they’ll be celebrated. But in Detroit, it’s like, “Oh my god, it’s so scary. It’s so Black and to make me feel comfortable it has to be something other than that.”

What are some of the things that excite you most about the younger generation of Detroit’s poets that are coming up in the city?

I think the younger generation, as a whole, are more empowered, to be honest. Not hiding their individual truths and looking at other people as beautiful and, you know, and deserving of a voice and being heard. (They) talk about dismantling patriarchy, sexuality and gender politics, nice things, people are just more awake and more open.

I saw a lot of misogynistic s___ back in the day — even at the poetry spots. So I like knowing that in this new generation, people are getting more aware and more sensitive. Therefore, it’s gonna make your poetry better, for sure, it’s gonna make the scene a better place.

I think one of the poems that stood out to me a lot was “Joy Boy,” because I’ve long thought about the juxtaposition of Joy Road’s reputation as this dangerous place you’re not supposed to go, and the word joy itself. How did you explain that tension in such a short poem?

I just feel like we know Joy Road, we know that neighborhood. So we know that depending on where you live on Joy Road, it’s not gonna be like the nicest area as far as the houses go, but the people there are beautiful, and those people deserve joy. And if you think about a young Black man off Joy Road, you know, that brother deserves happiness just as much as anybody else. You know what I’m saying? And I feel for Black men that come from areas that ain’t easy.

You end the book with a poem called “I Love My City, Y’all.” Were you always thinking of that as the final poem?

Yeah, because that’s like my little trademark Detroit poem that people from here know. So I was definitely conscious of one to end it with that’s just sweet and simple. And it kind of sums it all up. I love Detroit, the good the bad, you know, the big houses, little houses, pretty lawns, some s_____ lawns, you know? Just kind of like you said that contrast. It’s very much there.

One of the things I think your book says, even if you don’t overtly say it, is that loving Detroit isn’t easy, but it’s absolutely worth loving. How do you, you know, in your opinion, what does it mean to love a city like Detroit that has so much negativity always surrounding it?

It says we love it. I mean, look at New York, look at Boston, look at any other place, has its ups and downs, man. But if you’re from there, you get, you know, I live here, if I can’t enjoy it, it makes no sense. I would have just moved a long time ago. If I hated Detroit, I would have been left.

If you’re from here, you know how to navigate it. So, I just wanted to share honest Detroit truth, without any lies without any, I’m going to be honest, without any white gaze on it. I’m a Black man from Detroit, so I didn’t wanna consider anyone’s gaze but ours. So I hope people get that, like it’s loving as much as it’s for your grandma, your cousin, your neighbor, your friends. And they know what the truth really is.

Greene’s latest book, “The Detroit Poems” is available for sale at his website.