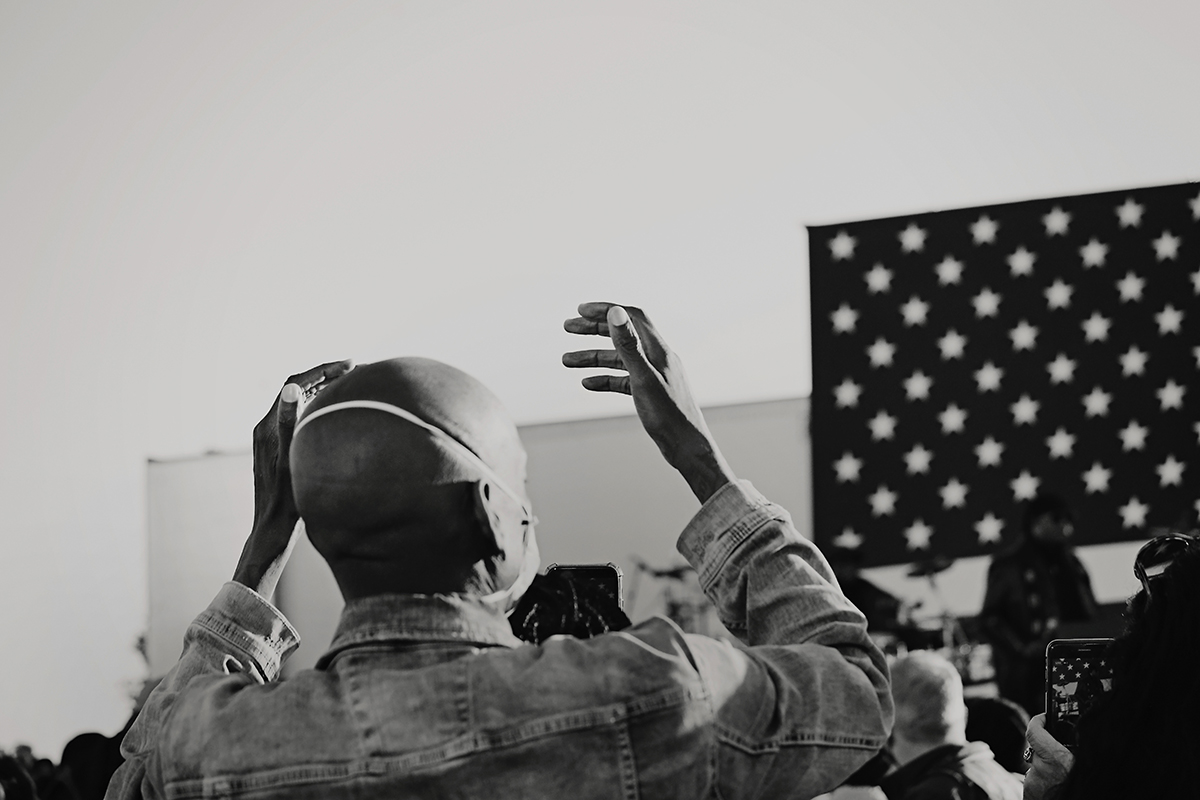 Detroiters gather on Belle Isle on Oct. 31 to hear former President Barack Obama and now president-elect Joe Biden. The visit was a last-ditch effort to get out the vote in Detroit for November. Despite the pandemic, the Detroit election had its biggest turnout in decades and more voted by absentee ballot than any previous election. (BridgeDetroit photo by Cybelle Codish)

Over the next week, the BridgeDetroit newsroom will highlight their must-read stories of 2020. The BIPOC newsroom hopes to tell in-depth stories of a great American city.

Job losses, the necessity of ongoing protests, an erratic election, and a global pandemic have left many (mostly me) stressed, exhausted and very isolated.

Seriously, I’m the most impatient person I’ve ever met. So, let’s leave this endless year behind us and get to the good stuff.

Would be nice, right? While this year was as unpredictable as the outgoing president, the more I reflect on 2020 the more thankful I become. Because there is no magical reset button and the “good stuff” won’t just happen at the stroke of midnight on Jan. 1, 2021. We will never be able to replace the lives lost from ongoing police brutality and COVID-19. However, as 2020 ends I feel fortunate to share the stories of brave Detroiters who continue to be advocates for others, who demand change regardless of the consequence, and who are willing to put in the work to find solutions.

When anonymous Twitter accounts accused many of harassment and assault this summer the platforms created a new space for survivors to share their stories and for advocates to support them.

The killings of George Floyd and Breonna Taylor broke the hearts of millions. Thousands protested for weeks in Detroit demanding a new approach to police systems, and questioned whether they should exist at all — especially in Detroit’s public schools.

After Michigan voters decided they’d had enough of gerrymandering, Detroiters stepped up to encourage each other to apply for the state’s first Independent Citizens Redistricting Commission. Two Detroiters were chosen and a Black woman from Detroit became the commission’s vice chair.

During a contentious election Detroiters showed up to vote, in-person and by mail (also known as absentee). When the vote count was threatened, Black women in Detroit ensured an accurate count.

Coronavirus shutdown rearranged much of what we know to be normal. Detroit took the pandemic seriously, wore masks and respected distancing measures, and moved the needle to record  one of the lowest infection rates in the state. Then Detroiters began the conversation about racial health disparities before a vaccine became available.

When hazardous waste threatened the health and well-being of a neighborhood, Detroiters held elected officials accountable.

BridgeDetroit has existed only several months (we don’t even have an office). And yet I feel immense gratitude for the support our small team has already received. Whether you have donated dollars to support our cause, subscribed to receive our content, or shared our stories within your network, please know that it is appreciated.

So while our city may be facing adversity today, I am hopeful that the work ethic and pressure being applied now, will create diamonds for Detroiters in the future. In the meantime, BridgeDetroit will be here to document every part and keep you informed.

Anonymous Twitter accounts cause stir among Detroit assault, harassment survivors and those accused

In the past month, anonymous Twitter pages have surfaced, allowing survivors of sexual abuse to anonymously share their stories while publicly naming accusers. The local community is now questioning this method of public storytelling and accountability as more Detroit names are called out.

Why does Detroit Public Schools have its own police department?

Michigan’s largest school district, serving predominantly Black and Brown students, has its own police department. Under emergency management, the state beefed up policing by building a $5.6 million command center and adding military equipment to its arsenal. Now, Detroiters and school leadership take a new approach.

Local organizations, volunteers say education is key to getting applicants of color and Detroit youth to apply to sit on the redistricting commission.

Brittni Kellom was one of two Detroiters randomly selected to sit on Michigan’s first Independent Citizens Redistricting Commission. She’s also the commission’s vice-chair. This lifelong Detroiter shares her personal story and why community voices are crucial to redrawing the state’s district lines.

Inside Detroit’s election: Black women’s stories of the count and the mayhem

Hear firsthand accounts from the battlefield as told by five Detroit election workers who sought to protect the city’s vote and clapped back at pro-Trump activists who cried fraud and tried to derail the count.

Once a state hotspot, Detroit has one of the lowest rates of coronavirus in Michigan

Once a COVID hotspot, Detroit lost 1,300 people to the virus. The city and its residents fought back and say limited interactions, face masks and frequent hand-washing make the difference. Detroit now has one of the lowest rates in the state.

In a study from the University of Michigan, 60 percent of Detroiters surveyed say it’s unlikely they’ll get a government-approved coronavirus vaccination when it becomes available. Experts say it’s because of distrust and ‘cultural incompetence’ in health care systems.

A deepening debate in the nation on systemic racial inequities has inspired Michigan activists to seize this societal moment to achieve reforms for communities of color that too often bare the burden of pollution in their communities.