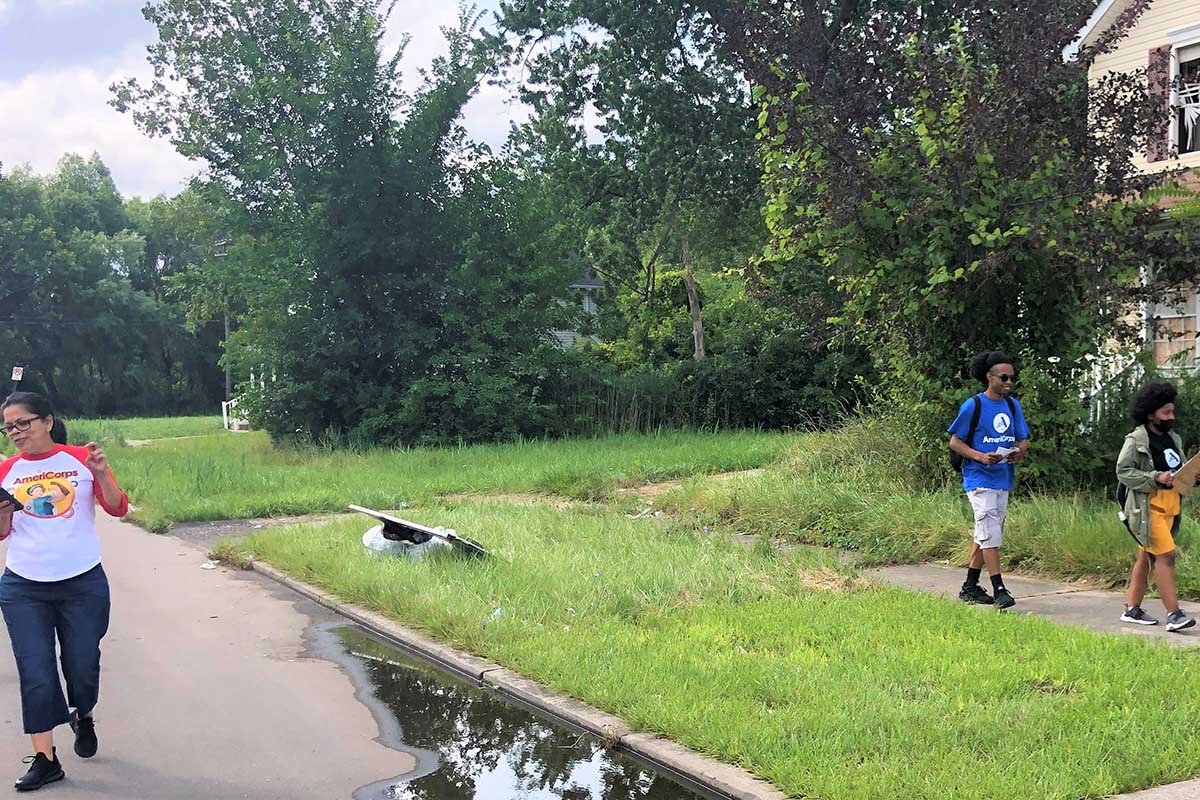 Ramona Washington, director of AmeriCorps’ Urban Safety program in Detroit (in the red and white shirt), and Detroit AmeriCorps members walk past blighted lots and homes to find residents affected by recent floods in the Jefferson Chalmers neighborhood. (BridgeDetroit photo by Louis Aguilar)

The floodwaters are mostly gone, but thousands of Detroiters are just starting to cope with the emotional stress of calculating their losses, dealing with bureaucracy, and fighting a sinking feeling that disaster will return.

An overflow of sewage and rainwater is a nightmare that keeps returning in people’s basements. It’s destroying major appliances that cost thousands to replace, and personal keepsakes that are gone forever. There are health risks from skin rashes to long-term respiratory issues, such as Legionnaires disease, due to mold or other microbes.

And it’s spoiling many Detroiters’ sense of security in their own home. 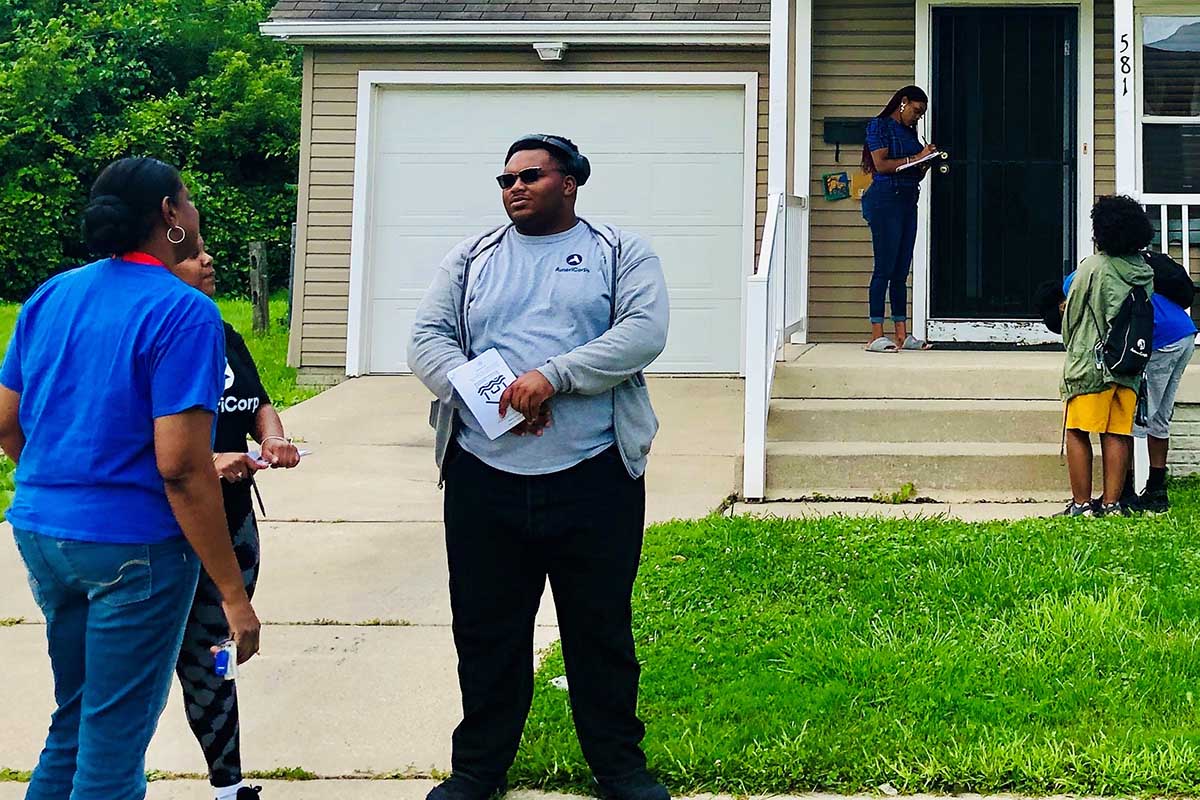 “I’m afraid of the rain now,” an east side resident told City Council recently as she described a new round of filthy water flooding her basement during a mid-July storm. She was still clearing out the damage from last month’s record rainfall. She’s not alone. Dozens of Detroiters describe similar situations and anxieties in various public meetings.

Southwest resident Elena Herrada told the City’s Board of Water Commissioners her home has flooded three times in the past month. After the first flood in late June, she replaced appliances in her basement — only to have them damaged again this month.

“I hear that sentiment a lot – people fearing more rain will bring more chaos,” said Ramona Washington, who is a veteran in helping Detroiters recover from floods. “It’s certainly a growing concern and, of course, a valid feeling.”

Washington is with Wayne State University’s Center for Urban Studies and program director for the AmeriCorps Urban Safety Program. For the past month, she’s been helping direct dozens of  Americorps members go door-to-door on the east side to inform residents of available resources. Getting information and aid to Detroit residents is something Washington has done many times in the past.

Washington’s experience tells her many people are entering a new phase of emotional stress.  “When the initial clean up phase is over, that’s when many can start to feel overwhelmed by what it will take to recover,” she said. 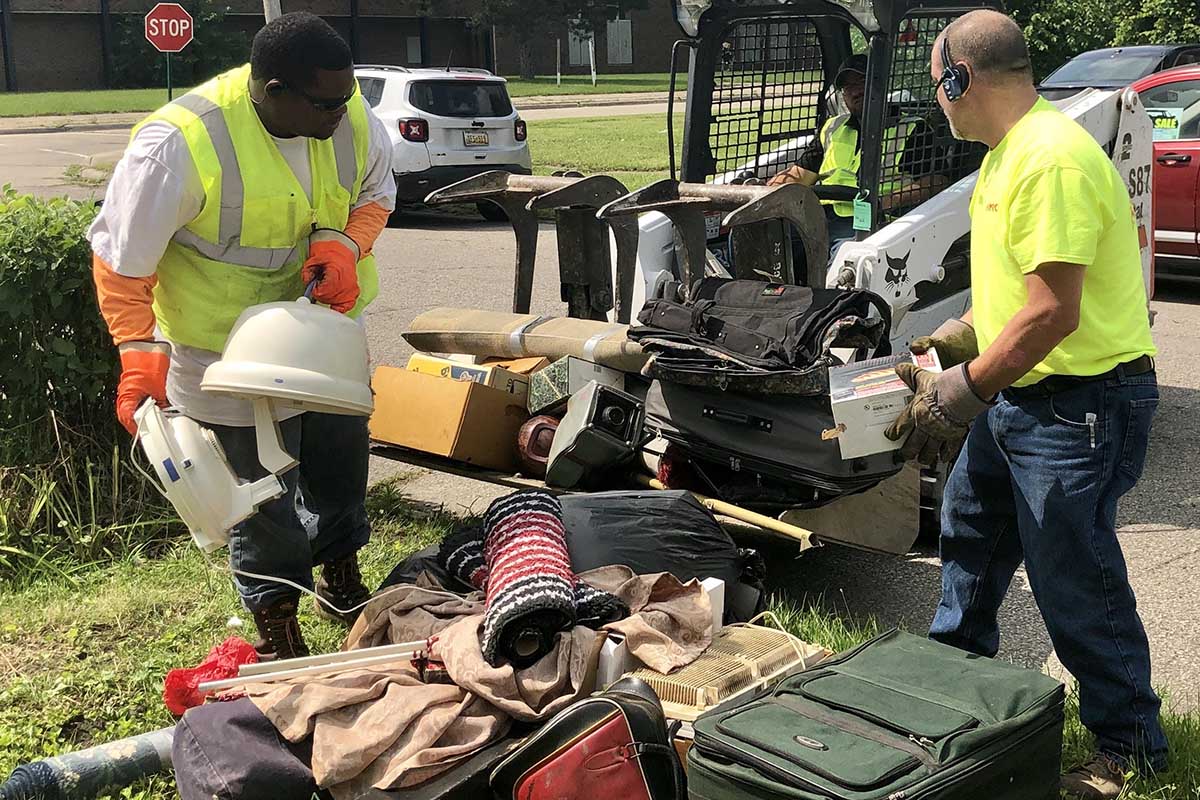 Workers pick up the flood-damaged remains of a Jefferson Chalmers residence on July 21. (BridgeDetroit photo by Louis Aguilar)

The area’s aging water and sewer infrastructure is not prepared to handle the new reality of frequent heavy storms. Metro Detroit homes, streets and freeways have been overrun by massive flooding at least four times in the past five years. The June 25-26 storms, which brought 5 to 8 inches in various parts of the region, were the second  “once-in-a-lifetime” rain event to drench Detroit since August 2014. Rainfall for the entire month of June is typically just 3  inches. This month, another quick storm caused more havoc in a region that the federal government had just declared a major disaster zone.

What researchers have found 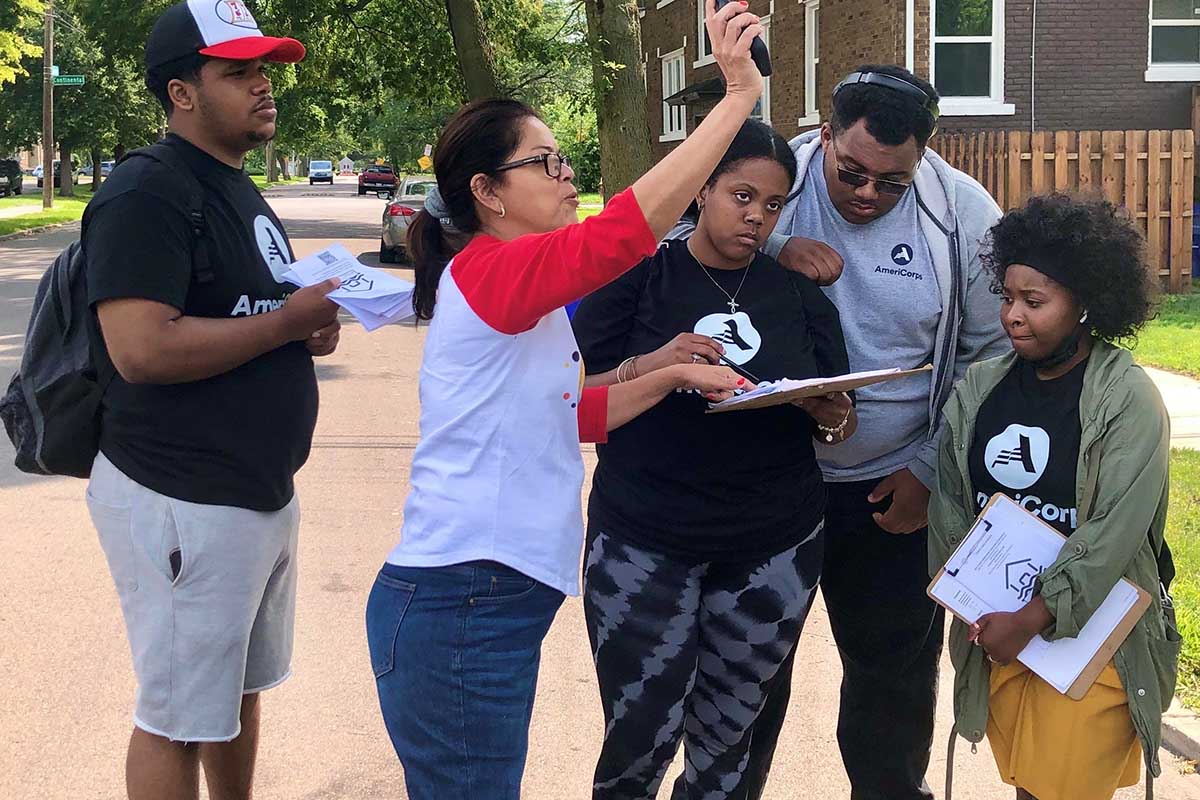 Among 4,667 Detroit households surveyed between 2012 and 2020, 46 percent have dealt with flooding. In a series of interviews with residents in 2018-19, some began to view rainfall as a source of growing anxiety, said Natalie Sampson. She teaches environmental and public health at U of M-Dearborn and is one of the authors of the report published in the International Journal of Environmental Research and Public Health.

“There are multiple levels of stressors that play out,” Sampson said. “There is anticipatory stress” that happens when it rains. After dealing with the physical clean-up of the flood, next comes the anxiety of reaching out to insurers and various government entities who can offer assistance and help residents recover some of their losses, Sampson said. There also are  concerns about long-term health effects, such as mold growing behind drywall.

And because this has happened to some people multiple times, there is an erosion of feeling protected in one’s own home.

“There is a sense of safety that is gone in the long run,” Sampson said.

Jalonne White-Newsome understands both the big picture of the challenges that flooding poses, as well the personal impact. She has a PhD in environmental health and has worked in state government, nonprofits and community-based organizations. She’s now CEO and founder of Empowering a Green Environment and Economy LLC, where her clients include government entities internationally, including the State of Michigan, environmental nonprofits and academia.

Her parents are lifelong Detroiters whose east side home has flooded five times in the past two years. Their basement was filed with a lifetime of memories — photos, personal files, the family Bible, etc. — that can’t be replaced.  They have been living in White-Newsome’s suburban Detroit home ever since the late-June flood.

“My step-father told me recently that he feels like a refugee,” White-Newsome said.

She’s helping them deal with paperwork with the City of Detroit and the Great Lakes Water Authority, who  denied their claims dealing with damage from a previous flood. The City contends her parents made some illegal connection with their personal sewer line that connects to the public system.

“It’s been repeated insult after insult,” she said. “The City and GLWA don’t want to take responsibility,” she said.

Part of the healing process for many is people need to feel they are not alone in this challenge, academics and others said. Residents also need to see governments and other institutions respond quickly to the crisis and talk about plans on how to prevent future disasters.

On a professional level, White-Newsome helps institutions and people connect the dots between climate change, decades of disinvestment in public infrastructure and systemic racism.