"Though this piece is North End specific, it captures the personality of Detroit, the city,' says Sydney James.

Milwaukee Junction is getting a new nine-story mural by Detroit artist Sydney G. James, who is reimagining the renowned Dutch painting “Girl With a Pearl Earring.” Now, she will be a Detroit girl with a pink earring.

The Johannes Vermeer painting is considered to be one of the most beautiful in the world, which is why James said, “we are going to put it in Detroit.”

The mural will depict a Detroit woman wearing a logo-heavy quilted jacket. The logos are from the North End and Paradise Valley businesses and an Old English “D” will dangle from her ear. The “Girl with the D earring” will dominate the expanse on the western wall of the Chroma development at 2937 E. Grand Blvd and replace the controversial “Illuminated Mural,” which was damaged during construction last year. 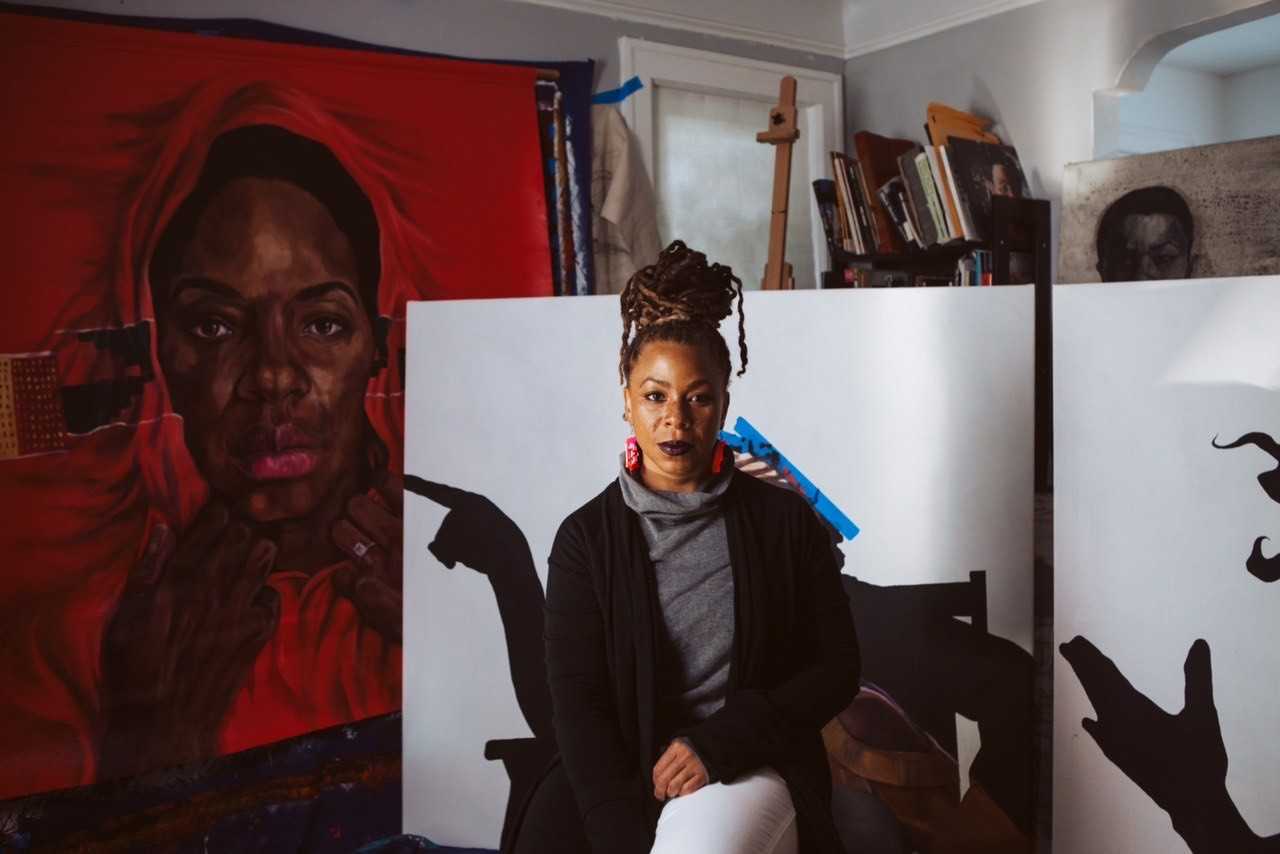 North End community advocate and artist Halima Cassells is James’ muse and inspiration for the woman in the mural. The muralist joined forces with Cassells first in 2009 which James says was also her first foray into public art. The pair did vacant lot takeovers in Conant Gardens which, in the 1930s, was one of the first and most prosperous Black neighborhoods in Detroit.

James also acknowledged the contribution from Detroit jewelry-designer Yolanda Nichelle. The Old English D earrings, created by Nichelle, are at the center of the work.

Detroit deeply inspires James’ work and she looks to capture the spirit of the city and the influence and culture of Black Detroit.

“I think Detroit is the city that taught Black people how to be Black, when we walk down the street, part of it is southern and part of it is hold your head up. You are supposed to speak and acknowledge a person — being able to hold our head up and strut comfortable in our bodies.”

Classic compositions and reinterpretation define much of James’ work and she points to examples like her Murals in the Market take on a Vibe magazine cover from the 1990s. Earlier this summer, James created a 3,500-square-foot mural in Highland Park to honor Malice Green and the lives of Black people who lost their lives as a result of police violence.  Green died after being beaten and killed by Detroit police officers in an unmarked car in 1992.

She has created murals professionally since 2015 and appreciates the size and public aspect of her creations.

“I am not even going to lie. I have been thirsting after this wall since I started painting walls because of the size,” said James. “The statement of a 5’4” Black woman going up and doing it that big? That’s part of the art of it as well.”

Envisioned as a creative hub, the Chroma development will offer co-working and office space. Work began on the 75,000-square-foot building in January 2019.

Catherine Kelly is a longtime Detroiter and Detroit Public Schools graduate who knows that narratives matter. Catherine believes narratives create inclusion, grow opportunity, and change history, which is why she has built a long career in media, communications, strategy and branding.