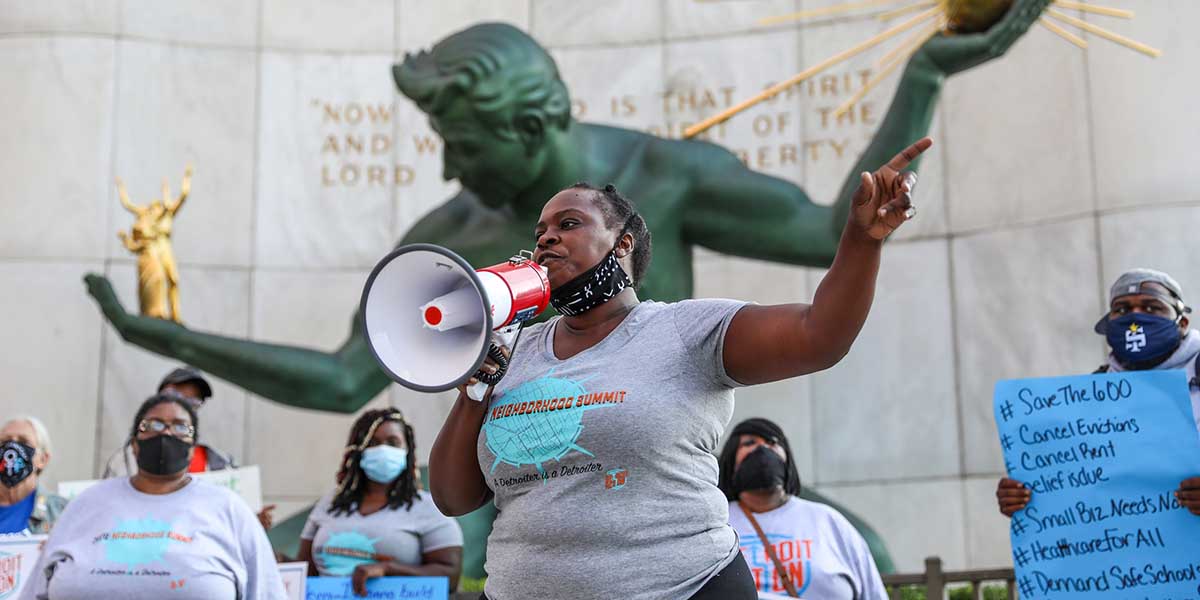 Shoniqua Kemp, 41, of Detroit is the lead organizer for Detroit Action and leads a rally asking the city of Detroit and the state of Michigan to cancel rent, mortgage payments and reinstate eviction moratoriums in front of the Spirit of Detroit in downtown Detroit on Tuesday, Sept. 1, 2020. (Credit: Kimberly P. Mitchell/Detroit Free Press)

After losing her job in the auto industry, the extra $600 in weekly federal unemployment aid helped Celestine Sanders keep up with rent and bills and put food on her table.

Now that it’s gone, she’s worried about falling behind on rent again, especially as the winter months approach.

“With these cuts, I can’t afford anything. I’m going back into a state of fear,” Sanders, 32 of Detroit, said at a Tuesday morning rally for housing rights during the pandemic.

Sanders was one of about 20 people who rallied in downtown Detroit for the cancellation of rent, mortgages and for an extension of lapsed eviction moratoriums.

Detroit action, a local community organization that focuses on economic and racial injustices, also called for the return of $600 in weekly aid, which ended July 25 in Michigan. Michigan United, a nonprofit coalition of labor, business, social service and civil rights members, joined the group.

In March, Sanders lost her job building frames for Jeep Wranglers. Soon, she ran out of the savings that were keeping her afloat. It wasn’t until early May that she started receiving unemployment aid. By then she was about $1,400 behind on rent but the extra money helped her catch up while looking for work.

Participants in the rally included Detroit Action organizers and members who marched from the Spirit of Detroit statue to the Buhl building, owned by Dan Gilbert’s Bedrock, where they picketed and chanted — “When housing rights are under attack. What do we do? Stand up, fight back.”  A rally organizer said they marched to the Buhl building to point out disparities between major corporations that have posted profits during the pandemic and small businesses that continue to struggle.

Donna Price, 59 and a member of Detroit Action, called on eviction and housing courts across the country to remain closed for evictions and for the cancellation of mortgages for “the duration of the crisis and a recovery period.”

“We’re here because our rent and mortgage is due…” Price said. “Homelessless is skyrocketing and small businesses are going bankrupt.”

Roshaun Harris, 35 and an organizer with Detroit Action, said the group is also advocating for paid sick leave, “so that when folks do come back to work if they do get sick, they’re able to take that paid leave, and it’s no injury to the business or to the individual worker.”

The rally takes place as safeguards, including a moratorium on evictions, put in place to weather the economic impact of the pandemic have ended.

In Detroit, a moratorium on residential evictions for nonpayment of rent expired Aug. 15 after a statewide ban lapsed a month before. A federal moratorium on evictions ended July 24.

In March, Wayne County Treasurer Eric Sabree said that he would suspend mortgage foreclosures for the rest of the year. At the time, a spokesman for Sabree said there were about 3,200 occupied homes — about 10,000 properties in total — that were likely headed to the tax foreclosure auction this year.

The extra $600 in federal unemployment aid — considered a lifeline by some experts and economists for people who are out of work — ended July 25 in Michigan. Last month, the Federal Emergency Management Agency approved an extra $300 for Michiganders, but details about when claimants will start receiving the funds, who is eligible and how long the money will last remain unclear.

For residents like Sanders, the future is uncertain. She said she’s worried about falling behind on rent in the months to come. “I know for sure I’m going to fall [behind] but I’m going to have a talk with my landlord,” she said about her rent, adding that she recognizes that her landlord has bills to pay, too. Her monthly bills round out to about $2,500 and she’s receiving about $1,400 in unemployment aid a month, as she pivots to a different career and looks for work. Still, it’s a “huge gap.”

“When you run out of money, you begin to panic. Because how are you going to sustain a life that you created for yourself? And then depression kicks in and all the other stuff that comes with it. It’s an emotional rollercoaster.”