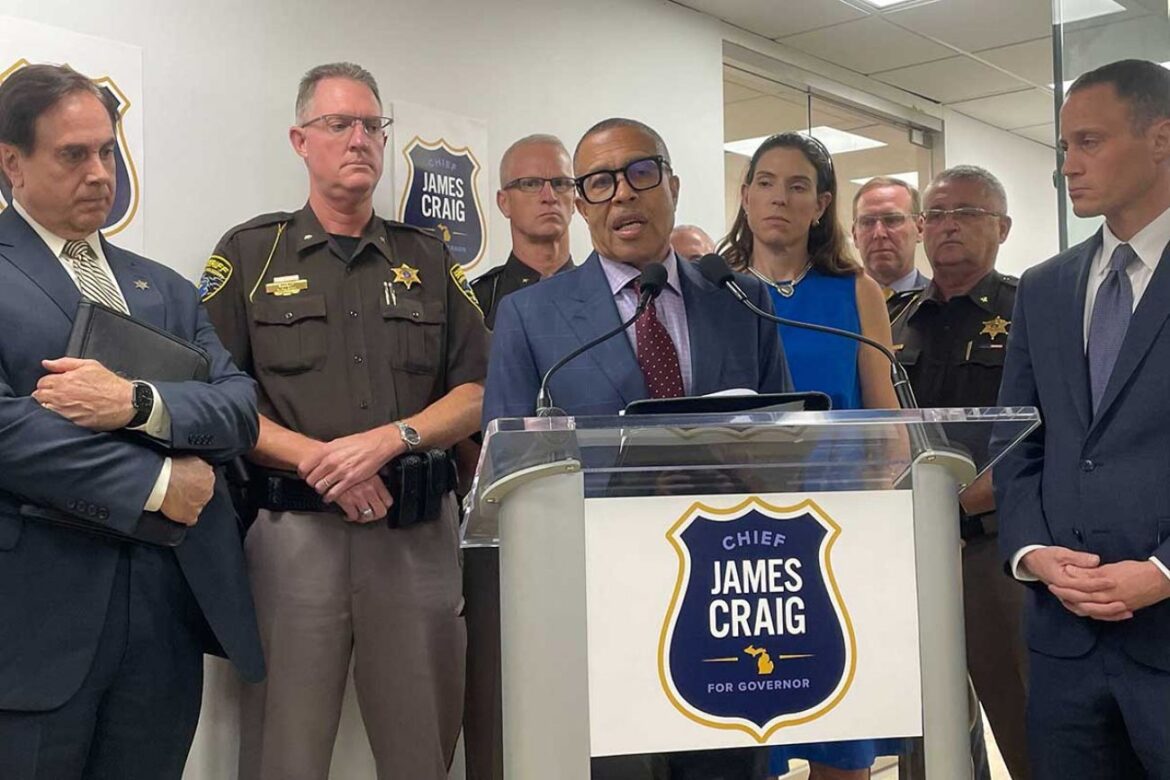 In his first press conference since launching his self-described “exploratory committee” for the GOP nomination, Craig answered questions regarding law enforcement, his stance on the Jan. 6 insurrection in the U.S. Capitol, and his previous enforcement of mask mandates as Detroit’s police chief.

“If there was evidence, if there’s a proper investigation that (shows) the election was stolen, then … I don’t have that information,” Craig told reporters.

When asked whether he wants the support of former President Donald Trump — who has continued sharing misinformation and lies about the results of the presidential election — Craig pushed back.

“If the president gives me an endorsement, I will accept it,” Craig told reporters. “But I want to be defined as James Craig, not Donald Trump.”

The press was not allowed inside the room, and was held in an adjacent room that was divided by glass windows. Craig said the meeting is the first in a series of meetings in which law enforcement leaders would help his campaign develop policy to better support officers and improve the force.

Last week, Democratic Gov. Gretchen Whitmer (D), who is expected to run for reelection, indicated she will not cede ground to Craig on matters of public safety by announcing a proposal to invest millions of dollars from the American Rescue Plan in local police agencies.

Craig is one of a handful of Republicans who have launched gubernatorial committees in the last few months. But he is the candidate who seems to have the support of many in the GOP establishment.

He also has some momentum: On Sunday, the Detroit Free Press released the results of a statewide poll that show 44 percent of likely Michigan voters would vote for Craig, and 45 percent for Whitmer. But 52 percent of the people surveyed told pollsters they do not know who Craig is.

Many of them have been reaching for the support of those in the anti-pandemic lockdown movement; at least one was at the U.S. Capitol on Jan. 6.

As chief of Detroit Police, Craig often enforced Whitmer’s emergency orders during the pandemic that shut down businesses and required the use of face masks to prevent the spread of coronavirus.

But as he began his run for governor, Craig has criticized Whitmer’s orders. When asked Monday why he did not defy them like some other Republican law enforcement chiefs in the state, including Murphy in Livingston County, Craig said that wasn’t his job.

“So, I followed what was passed down from the governor to our mayor.”

Craig added, though, that he ordered his department to stop issuing citations when he saw that in Lansing, protestors who were not wearing masks were not being fined.