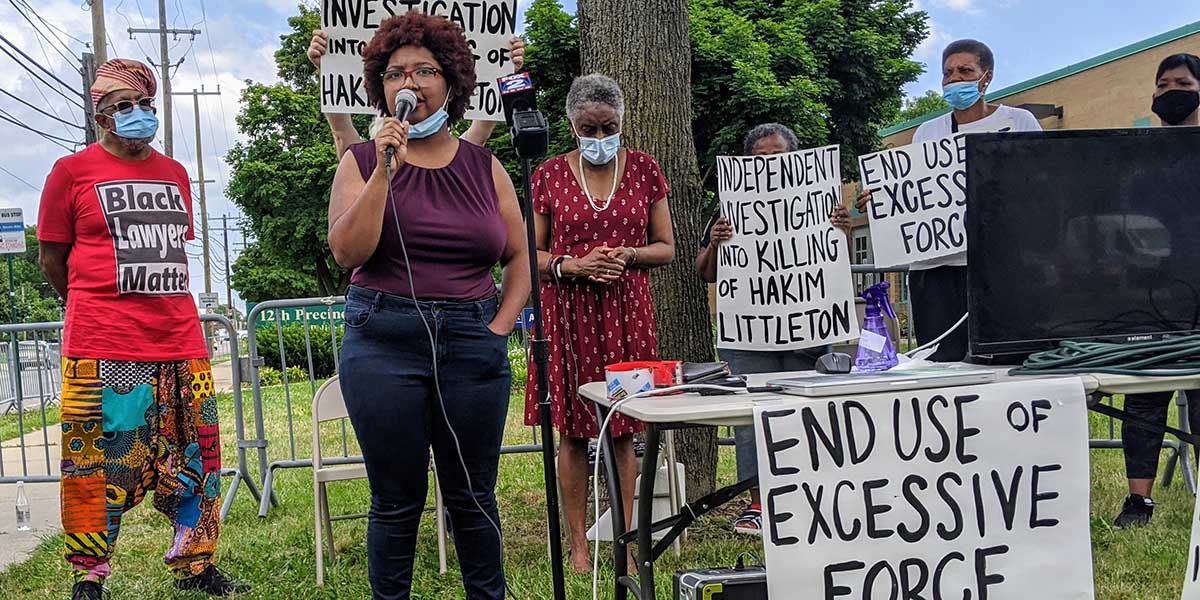 (L-R) National Conference of Black Lawyers’ Jeff Edison, Detroit Will Breathe’s Nakia Wallace, Aneb Kgositsile and others stand against the police killing of Hakim Littleton and use of excessive force. (Photo by Bryce Huffman)

On Thursday, the 53rd anniversary of the 1967 Detroit rebellion, 17 organizations — representing a wide spectrum of community engagement — formed a coalition demanding an independent investigation of the police killing of Hakim Littleton, who was shot and killed by Detroit Police officers on July 10.

The Coalition for Police Transparency and Accountability is also demanding an end to excessive police force. It is asking that Michigan’s Attorney General Dana Nessel lead the investigation alongside civil rights and community-based organizations including the National Conference of Black Lawyers, the Detroit Justice Center, and the ACLU of Michigan, among others.

Nessel has not yet responded to a request for comment.

Police Chief James Craig doesn’t believe another investigation is necessary and said “as far as he is concerned,” the video evidence is clear. He also said the Wayne County Prosecutor’s Office is conducting an independent investigation into Littleton’s shooting, as is the case with any police shooting.

“If a finding is that the officers violated the law, the [county prosecutor’s office] will charge with the most appropriate offense,” Craig said.

On July 10, officers shot and killed Littleton after he allegedly pulled out a gun and fired at them, according to the Detroit Police Department. Littleton was 20 years old. A massive protest emerged over the next few hours on Detroit’s west side while several rumors spread across social media about the shooting.

That night, Chief Craig held a news conference and showed a video many believe align with the department’s account of events. The coalition disagrees with Craig’s perspective and  released a video highlighting inconsistencies in Craig’s story. Craig says he will wait until the department verifies the authenticity of the video before commenting on it.

Aneb Kgositsile, poet, co-founder of the Detroit Coalition Against Police Brutality and retired professor from University of Michigan-Dearborn,  is a member of the coalition who called the shooting “another egregious instance of excessive police force.”

“It is time for us now to develop institutional changes to free our communities of state violence of all kinds — police killings, juvenile detention, policing in our schools, mass incarceration and, now, the Gestapo-style military operation that is happening in Portland and may happen in our city,” Kgositsile said.

Nakia Wallace is also with the coalition. She is a co-founder of Detroit Will Breathe, founded in the wake of widespread anger over the police killings of Breonna Taylor and George Floyd earlier this year. Wallace, who was arrested at the July 10 protest and was put in a chokehold by a DPD officer, says one big problem she sees with the department is a “general lack of transparency.”

“I think we should all be able to look up any police officer and the complaints filed against them, and we shouldn’t have to ask for that information,” Wallace said.