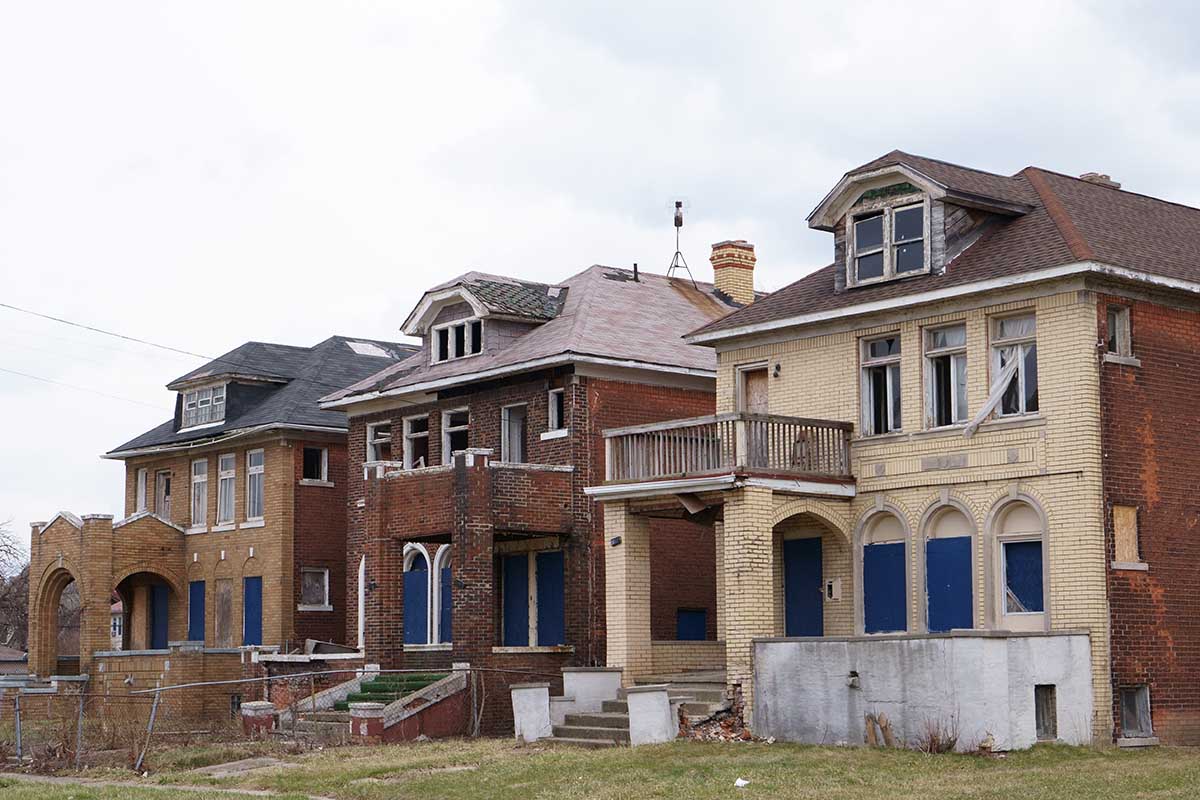 Detroit taxpayers will go to Wall Street for money to tear down or preserve 16,000 blighted homes. (file photo)

Detroit voters will make a big local choice this election. Residents will approve or reject Mayor Mike Duggan’s plan to wipe out 16,000 blighted homes and lots by 2025. But winning over a key constituency of community development groups has proven to be a daunting task.

“It’s going to be tight, but I do believe it is going to pass,” said Quincy Jones, executive director of the Osborn Neighborhood Alliance, who supports the plan. “The main thing, there’s still too many homes and blight that’s been sitting around for years and people want to see that change.”

Whether “Proposal N for Neighborhoods” is the best way to make that change happen is what Detroiters will decide.The city wants to borrow $250 million in the form of bonds from Wall Street investors. About $160 million would be used to demolish 8,000 homes. Another $90 million is for 8,000 properties originally slated for demolition but instead would be secured. Securing means cleaning out all debris, covering windows and doors and fixing the roof if necessary.

Community development organizations, CDOs, play a key part in the 8,000 homes that would be secured. The groups would help the city identify which blighted homes in their neighborhoods are worth saving. The groups would then be able to buy, renovate and sell the properties, which are currently city-owned.

Based on interviews with the leaders of 13 CDOs, most have decided not to take a formal stance on the proposal. One group is campaigning against the measure and another is publicly supporting the plan.

Further, a coalition of CDOs called Detroit 21 has decided not to take a public stance on Proposal N. The coalition was critical of an earlier bond measure last year that failed to make it on the ballot.

City officials reached out to various members of Detroit 21 groups to help shape the current plan.

The Osborn Neighborhood Alliance, like other CDOs, has long worked with finding ways to help residents in its east side neighborhood buy and restore blighted homes.  “We’ve made progress but there’s still blight,” Jones said.

Jones acknowledges the criticism of Proposal N.  “I understand the concern; this is a loan that taxpayers need to pay back,” he said. “But on these kinds of complex issues, I think a lot of people don’t see it simply as right or wrong. This could be 60 percent right.”

Saving up to 8,000 blighted homes is one of the big differences in Proposal N compared to an earlier Duggan-driven plan rejected by City Council one year ago.

The city’s point person on Proposal N is often Arthur Jemison, Group Executive for Housing, Planning and Development. He’s given a number of public presentations and met with various community groups to discuss the plan.

He, too, has found many CDOs and other community groups have taken an official neutral stand, Jemison said.

“From what I’m hearing, there is a very robust conversation going on about Proposal N, “ Jemison said. “I am not surprised about the neutral stands, these are organizations with a broad range of members.”

The bigger issue, he said, is the city needs to continue relationships with these community groups no matter the fate of Proposal N.  “I don’t think about this in a transactional way. I don’t want them to feel like our expectations are not being met,” Jemison said.

There’s more than 22,000 blighted homes and lots in Detroit, according to city officials. They are the terrible physical reminders of bad housing policy and a city that’s lost over 1.1 million residents, including more than a half-million since 1990. Detroit’s current population is estimated at 670,031, according to the U.S. Census.

Detroit has waged a campaign on blight for six years using $265 million in federal money. About 21,000 structures have been demolished, and 6,000 vacant homes have been rehabbed and occupied since 2014.

The federal money is now gone. The COVID-19 pandemic wiped out an estimated $410 million in tax revenue, according to city officials.

“That means there are simply not resources to undertake demolition and rehab activities from the general fund,” said David Massaron, the city’s Chief Financial Officer, in an interview last week on WDET’s Detroit Today.  The general fund is the main source for revenue that pays for  municipal services such as public safety, health and human services, and public works.

The top concerns by CDOs about Proposal N

The overassessments of property taxes in the recent past hangs over the issue.

The city needs to find a way to compensate homeowners. Until then, all other city proposals dealing with neighborhood blight are going to face resistance, many heads of CDO’s said.

“Many have serious reservations,” about the proposal, said Phyllis Edwards, executive director of Bridging Communities. “They are based on the fact a lot of Detroit homeowners were illegally assessed and therefore foreclosed on and moved out of those homes. And the city now seeks to demolish those properties,” she said.

Many Detroit residents contend they are still being overassessed despite city assurances they are not, Edwards said.

Bridging Communities was among the CDOs the city sought advice on how to shape the proposal. In the end, it did not take a formal stand.

“We decided we would do our community a better service if we helped educate them what a bond is,” Edwards said. That includes pointing out the interest on the bond over a 30-year period could add up another $240 million, according to city officials.

There is skepticism whether the 8,000 homes intended to be saved will end up as affordable housing.

That concern stems from the fact so many Detroit homes are bought by developers with cash, who then go on to renovate properties that many long-time residents can’t afford. Meanwhile, residents in many Detroit neighborhoods can not get mortgages, according to various studies.

“I know [Proposal N] is controversial with a lot of people, but, I’m a bit more agnostic about it. There are still a lot of areas that are devastated by blight,” Johanon said.

LIke many heads of CDOs, Johanon expressed a mix of pros and cons about the measure.

“We have to be committed to affordable housing. I’m hearing that conversation in other ways from the city, but not in this proposal,” she said.

The financial estimates are too low to demolish 8,000 homes and revive another 8,000.

The city says it will spend $90 million in securing homes. That amounts to spending $11,250 on each property. Various city documents and several city officials say that in the past as much as $15,000 may be spent on securing a home.

Not every property fix-up will cost the same, city officials point out.

“The city is once again asking its residents to make a leap of faith and the trust isn’t there,’” said  Mildred Hunt Robbins, president of the West Grand Boulevard Collaborative.

Not enough is being done to the thousands of Detroit homeowners who need help with home repairs.

Proposal N’s focus is on the tax-foreclosed properties owned by the Detroit Land Bank. But

Numerous CDOs such as the U-Snap-Bac nonprofit have been offering home repair programs for years. More than 500 people applied for the nonprofit’s $7,500 grant for home repairs last year. It was able to help 40 homeowners. The funding comes from a regional federal bank.

“There’s not one dollar in Proposal N that will help a guy to stay in his house,” said Anthony Adams, an attorney and former deputy mayor in the Kwame Kilpatrick administration. He made the comments during a Zoom public meeting of Proposal N hosted by the West Grand Boulevard Collaborative.  Adams is an outspoken critic of Proposal N.

A municipal bond like the one the city would use for Proposal N can not legally be used to fix up privately-owned homes, Jemison said.

“We looked into that and that can’t happen,” Jemsion said.

Proposal N is one step in the process to revive the city’s residential real estate back to a point where many can get mortgages and home repair loans, Jemison pointed out.

No matter the fate of Proposal N, the city and its residents will continue to grapple with that challenge for years.