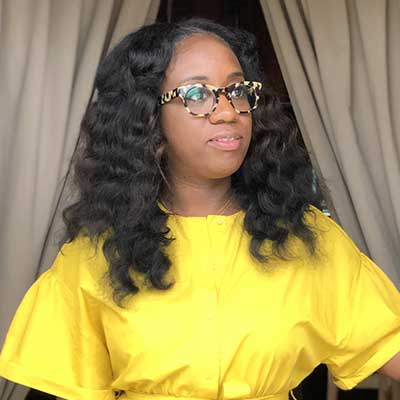 The two-day meeting was made available to the public, as will every commission meeting. The commission’s task for the next year is to listen to Michigan’s residents to redraw the state’s district lines. It is the first time Michigan’s districts will be drawn by citizens, not politicians.

Brittni Kellom, one of two Detroiters on the commission, was chosen to be vice chair. Juanita Curry is also from Detroit.

BridgeDetroit interviewed Kellom to find out why she was interested in becoming a commissioner and how Detroiters can stay involved through the process.

The 13-member commission was randomly selected and one person has already resigned. That person was replaced by Glenn Shaw, a Wayne County resident who is not affiliated with either major political party.

Kellom’s interview was edited for length and clarity.

BridgeDetroit: The selection process for the commission was completely random. So, who is Brittni Kellom?

Kellom: Ta-da! Who am I? I am a trauma practitioner, founder and visionary of Just Speak Inc. It’s a nonprofit advocacy organization that works alongside children and adults to build trauma-informed practices at any youth center. I’m also a consultant with the B+ Method. I founded that business because some folks don’t necessarily want programming, they want specified services that I offer as a thought leader, as a speaker, as a survivor of childhood incest, so that’s what the B+ method does. I ensure that spaces have environmental elements of what it means to be trauma informed.

So besides my deep, deep, deep love working alongside young people and working in the field of trauma I’m also a daughter. I am a proud dog owner of Hendrix. I loooove music, Olivia. I am a lover of the city of Detroit and community and making sure folks have a safe space to engage.

On the flip side of that I’m also highly private and very much an introverted extrovert. My family, my close friends are very important to me and spending time with them is very important to me. I was raised an only child, I do have other siblings but I was raised in a house as an only child. I’m the type of person that if you are having a hard time or you have a story that you think nobody wants to hear I want to hear it all. I want to hear the real answers to the question, ‘How are you?’ It’s really cool to be a part of this opportunity and to work within my community and for my community at this level.

Lewis: Are you from Detroit? Did you grow up here?

Lewis: Why did you want to be on the commission?

So it was to me kind of this obvious extension of the advocacy work that I do and have been able to do while also having an opportunity to learn. I’m also very passionate about people of color, people that have been disenfranchised in any way, being represented. I was interested in how this was going to shape how those conversations happen since you want people who aren’t necessarily politicians. So to have this idea where your neighbors, the people you are walking alongside of every day are helping to create this profound space in Michigan that is more fair, more just, and more equitable.

Lewis: The Independent Citizens Redistricting Commission is new for everyone. What are you looking forward to most?

Kellom: The opportunity to learn about typography and where the census comes in. I think I’ve shared my thrill and love for creating spaces even when folks might not want it or think that they don’t need it, just having that offering available—the community engagement to have those conversations. And to figure out what people like about the idea, why don’t people like the idea.

What’s behind folks not voting, like what are the practical concerns of what that looks like in our city. I think all of those elements come together, like the process and excitement of how those map lines are drawn and then attaching the community to what we’re doing. I want them to know as much as I know about it, honestly.

Kellom:  I think I’m kinda new to that point.  I definitely think growing older and the work that I do with children, children’s rights, and education, was the first kind of jumping-off point for me being on the end of wanting to do the work in that sort of space, but then at a more macro level of wanting to know how those things are affected. And I think if, like most people, no matter what side of the coin that you’re on the environment that we’re in now will have lit a fire for whatever issue you believe in. I think the most important thing is that folks are more involved. A mixture of natural curiosity and feeling like as we get older and have more experiences, it’s our duty to be as involved and create a sense of belonging in our surroundings as possible.

Lewis: Congrats for being voted as vice-chair on the commission by your peers. Why do you think it matters that Detroit is represented?

Kellom: I think Detroit representation matters, I mean even when I think about this recent statistic about our challenges with voting and getting to the polls that comes to mind. Detroit is a city with a lot of spirit and a lot of innovation, naturally. I know there’s also this concept that Detroit is a blank slate but I like to think that we have the substance and the right mix in the first place. I think all of that deserves to be represented. And when I agreed to be vice chair it was about being able to facilitate those conversations. Not necessarily a leadership position, but I always say I’m there to make sure the actual meetings and the flow continues. Also, representation of our city is important so that our voice is heard and I think it matters to have a Detroiter at the helm of that because who else would speak for us? Who else would we have that could do it in a way that is objective? I love my city, but I love the people in it more. So I think being able to have someone that really believes that shared learning and shared information should happen. It makes all the difference.

Lewis: After last week’s virtual two-day meeting, how are you feeling about voters controlling the redistricting process?

Kellom: I’m really excited. They were long meetings but they are needed because none of us have done this before and it is in alignment with wanting to be transparent. The fact that we don’t have any ties or any sort of extra interests besides serving our community and making sure we are thoroughly informed to make the best choices along the way to make sure this process goes the way it is supposed to. I included that in my application as well.

Citizens should have a voice in the place that you live. If I’m voting in my area and able to articulate the things that I want in my community, my personal life, my family, and all of those things with a ballot then I should be able to do that at an entry level and I think the commission does that. It allows everyone to get involved and become more curious. Even if it’s something you don’t agree with it starts a necessary conversation and stirs the pot, in my opinion, in the right way to elevate those concerns in conversation.

Lewis:Thanks so much for your time and allowing us to know you a little bit better. Anything else you want to share or think the community should know?

Attend the redistricting commission meetings at www.RedistrictingMichigan.gov. Citizens can submit questions and comments but sign up ahead of time.