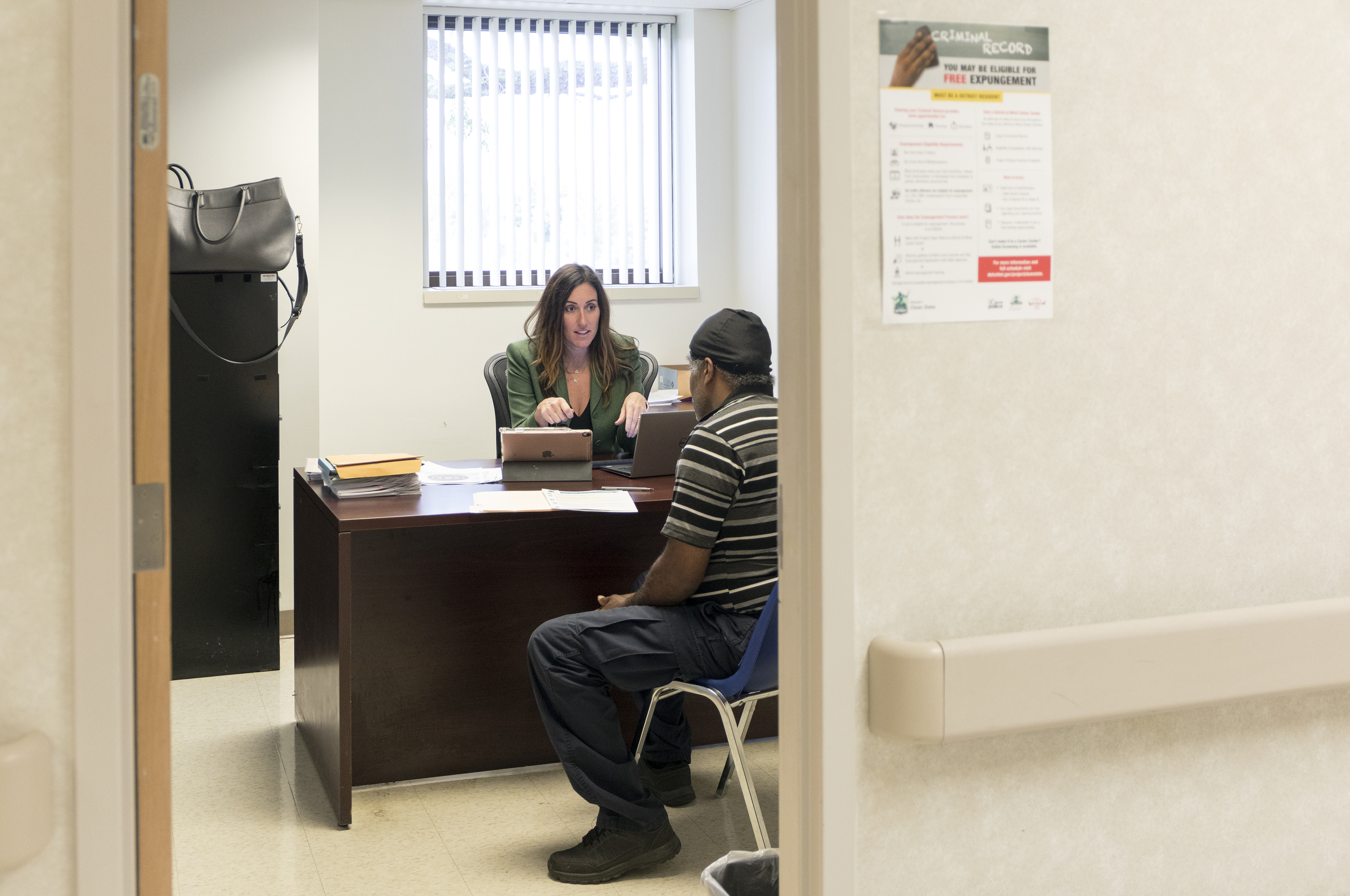 In this 2019 photo, Project Clean Slate lead attorney Stephani LaBelle tells a client that his record is eligible for expungement at the Samartian Center in Detroit. (Detroit Free Press photo by Kathleen Galligan)

Detroit residents who think they might be eligible for expungement under new laws that take effect in the spring are encouraged to apply now for assistance through Project Clean Slate, a free city program.

Gov. Gretchen Whitmer in October signed into law a bipartisan package of seven bills expected to expand access to expungement to hundreds of thousands of people across Michigan.

In Detroit, the city estimates that 86,000 additional residents will qualify to have their conviction records cleared from public view under the legislation, bringing the total number of residents who qualify for expungement to 168,000.

Most of the changes will take effect in April. Project Clean Slate attorneys are encouraging residents to sign up online so that staff can start to prepare their cases. The program, which is available only to Detroit residents, walks people through each step of the expungement process, from the application to the court hearing.

“What we’re doing to get ready is flagging each eligible person for April eligibility so we can get things rolling,” said Stephani LaBelle, supervising attorney for Project Clean Slate. “… It’s not an instant process. We have to do some stuff behind the scenes.”

Clearing old criminal histories from public view can remove a barrier to employment, housing and other opportunities for those who’ve been rehabilitated. A University of Michigan study found that wages increase by an average of 25% within two years of expungement. Project Clean Slate’s staff pointed to the example of one client who saw his hourly wage climb from $10 to $26 after his record was expunged.

“This is unlocking economic opportunity, housing security, income support for hundreds of thousands – it could be as many as a million people in the state of Michigan,” he said.

The most sweeping change is the addition of an automated system to expunge some convictions after a period of time, omitting an application process that can be complicated and costly. But it’ll be some time before this takes effect; the state has two years to build the automated system.

Before then, the changes coming in April will expand eligibility through the application process, during which an expungement is decided by a judge.

These are some of the key changes:

The program is on track to help 280 people get their records cleared this year, the most since Project Clean Slate’s first expungements in 2017. Most hearings have shifted to Zoom during the coronavirus pandemic.

“We never have turned anybody away just because of volume. We just get it done,” LaBelle said.

Project Clean Slate plans to reach out to people who previously applied to the program and will now be eligible to start the process with fingerprinting and other steps. People who haven’t applied can do so at detroitmi.gov/departments/law-department/project-clean-slate. Questions may be sent to projectcleanslate@detroitmi.gov.

For residents in other areas of the state, the Attorney General’s office plans to release instructional videos and information on how to navigate the new expungement laws. A spokesman said there’s not a timeframe for when those resources will be published.

Angie Jackson covers the challenges of formerly incarcerated citizens as a corps member with Report for America. Her work is supported by The GroundTruth Project and the Hudson-Webber Foundation. Click here to make a tax-deductible contribution to her work.