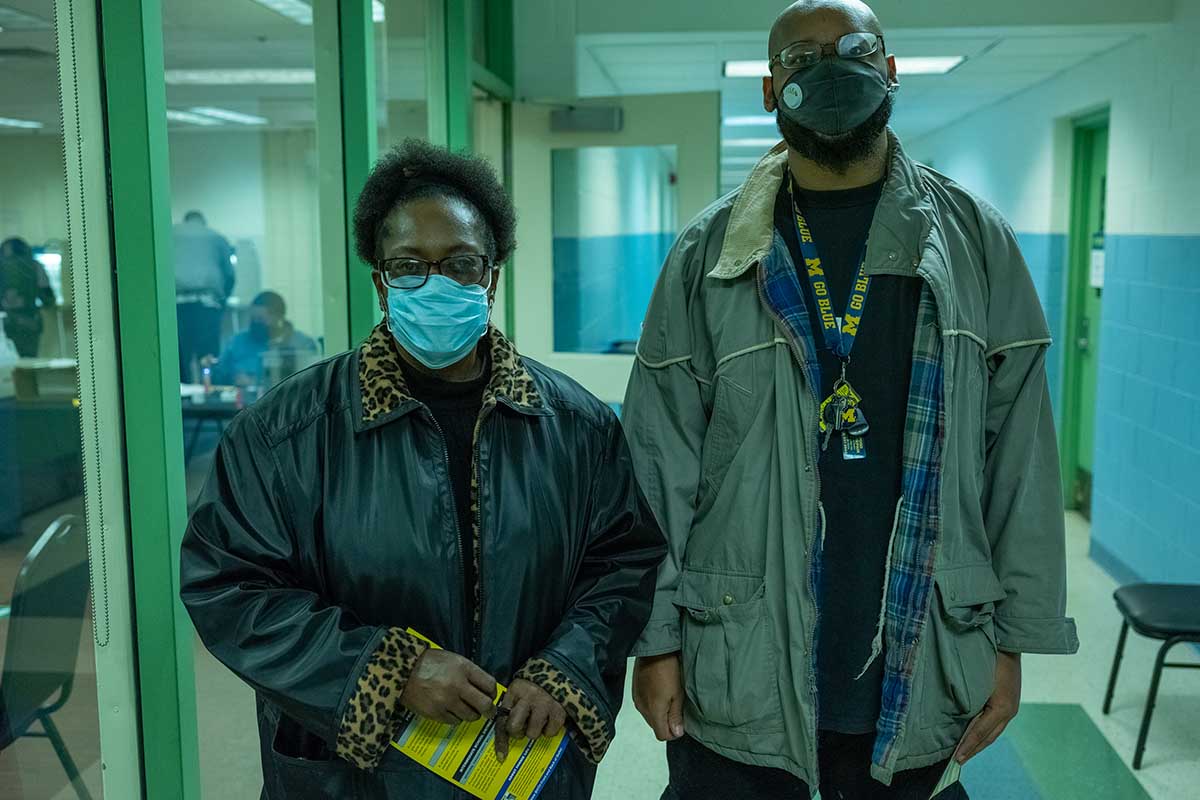 Cristina and Charles Williams of Detroit are among more than 100,000 residents who have voted early in the November election. (Ralph Jones photo)

The August primary in Detroit was marked by accusations of error-filled counts of absentee ballots. That fueled big changes made by city, state election officials for the Nov. 3 election, in which a record number of Detroiters will use some form of early voting.

More than 102,000 Detroiters have returned absentee ballots, as of the week of Oct. 26. That surpasses the 2012 record when 80,000 absentee ballots were cast in the presidential election in which Barack Obama won a second term.

Nearly two-thirds of Detroiters are on track to use some form of early voting. More than 169,341 absentee ballots have been issued to city residents. Election officials estimate a total of 255,000 Detroiters will vote this election. That adds up to about a 51 percent turnout, close to the level of voter participation during the 2008 Obama election.

The biggest change most can see for the November election is the 23 satellite voting offices and 30 absentee ballot drop boxes that opened Oct. 5. The satellite offices allow residents to register to vote, pick up an absentee ballot and vote on the spot. The drop boxes allow voters to put in their completed and sealed early ballot. Both stay open until Election Day.

Since the August primary, the Michigan Secretary of State has taken on a “partnership” role with the Detroit City Clerk for the presidential election. The state agency added temporary new staff in top roles at the City Clerk, played a role in recruiting poll workers and assisted in retooling the training of workers.

Detroit City Clerk Janice Winfrey says the lack of poll workers was partly to blame for the miscounts of absentee ballots in the August primary.

The city has trained 10,000 workers for the November election, Winfrey told BridgeDetroit. After August, Winfrey reached out to  historically Black fraternities and sororities, to recruit poll workers. Many other community groups, nonprofits and individual Detroiters have stepped up to work. The result is a much deeper base of poll workers than usual, Winfrey said.

“We are very encouraged by the poll workers we have. We’re excited,” Winfrey said. “We have leaders in what they do every day, and they are used to managing large groups of people. That’s the only silver lining with this pandemic: We have a much better quality of poll worker that  we have to choose from for this election.”

Training has been beefed up, with more of an emphasis of hands-on practice and how to deal with absentee ballots, election officials and others said.

Another change since August is some Detroit poll workers will work in shifts — now as opposed to one incredibly long work day that could have lasted up to 24 hours, Winfrey said.

There’s also a new state law that allows workers to remove absentee ballots from their outer envelopes and start sorting them on the day before Election Day. The law is designed to speed up the process. Adding more shifts is aimed at reducing the chance of human error.

Poll workers essentially form an assembly line that’s expected to produce an accurate count of ballots at the end of a very long day. Each worker has a specific role that often includes fact-checking the information given to them — a voter’s name, a ballot number — and that information gets checked again by the next worker on the line.

Several workers described a hurried training session that left them with questions. Others say the training has improved from August.

Attorney Sofia Nelson will be among the more than 1,000 workers who will process absentee ballots in the basement of the TCF Center downtown next week. She’s working the 10 p.m. to 5 a.m. shift starting Election Night. The day shift is 7 a.m. to 10 p.m. During the shifts, the workers can’t have their mobile phones, can’t have food at the tables and will mainly have to stay in the big room for the duration.

It’s Nelson’s first time as a poll worker. She was told the wrong hour to show up for her training. Officials told her to return the next day and arrive at least 45 minutes early. When she returned early the next day, there was already a long line. “By the time they opened the doors, there was a much longer line of people behind me.” Many people waiting in line didn’t get in, Nelson said.

Her training session began with instructors announcing some workers would have to work two shifts. Nelson made it clear she couldn’t take that much time off from her day job.

“The training was very rushed. If people were making repeated mistakes, we just sort of moved on. That said, the instructions are clear and there’s a checklist at every seat. And people at the table are engaged,” Nelson said.

Nelson is part of a five-person team who will sit at connected tables and each has a specific role.  “You’re not really counting them, a machine counts them,” Nelson said of the ballots. “You’re opening the envelope, making sure the envelope is signed, that the secrecy sleeve is in there; there’s all these rules.”

Nelson’s job will be to check the ballot has no rips, isn’t stained, filled in with blue or black ink — essentially ensuring the ballot machine will be able to read the ballot.

“The training was very rushed. If people were making repeated mistakes, we just sort of moved on. That said, the instructions are clear and there’s a checklist at every seat. And people at the table are engaged,” Nelson said.

On Saturday, Nelson got a call from election officials saying she’s assigned to work two shifts —  something she clearly stated she could not work. She has a court appearance scheduled the day of her second shift.  She hopes to get out of the second shift.

First-time poll worker Jackie Karas was a “bit shocked” when she learned she will be a precinct chairperson on Election Day. “That seems pretty detailed for someone who has never worked an election,” she said. “They are putting a lot of trust in someone they know nothing about.”  Karas runs her own business as a makeup artist.

On Election Day, Karas needs to show up at 5 a.m., which is two hours before polls open.  When the polls close at 8 p.m. she’s got plenty more paperwork. Her day ends when she delivers the ballots to a central location.

The number of poll workers at precincts will be increased, instructors told her. There will be five to six at each precinct compared to three or four in past elections, she said.  Her 2½ hour of training felt hurried, she said. She was in a room with six other women who will be precinct chairpersons.. Four of the trainees had been poll workers before.

“I came out of that training with plenty of questions,” she said. She was given multiple packets of information she hopes will provide more answers.

One thing she wishes her training spent more time on what to do if a poll challenger shows up.

“I’m thankful I live in the city of Detroit, which I like to believe is progressive,” Karas said. “If I lived in some place like Macomb County where there’s more tension, I’m honestly not sure if I would sign up,” to be a poll worker, she said.

But as a Detroiter, “I’m super excited. I want to help,” she said.

Elizabeth Luther and Bruno Vanzieleghem both worked the August primary at voting precincts. It was their first time as poll workers. Both will work on Election Day again at precincts. Like all poll workers, the two had to go through training again.

The training has improved, both said. “The three hours training was more thorough this time,” Vanzieleghem said. “The instructors seemed more experienced, the packets of material you are given are more clear,” he said.

And much more time was spent on how to deal with voters who may have some issue, such as when records show someone has turned in an absentee ballot or requested one.

The possibility of armed citizens showing up at polling places is something that’s in the back of their minds, the two said. But not enough to deter them.

“Too much is at stake,” Luther said. ‘“I know people probably say that for every presidential election. I just want to do what I can to make sure our votes count.”

Checking on the status of absentee ballots

Voters can go to this site, or this site, to check on the status of their absentee ballot. It can take several days to show a ballot has been received.

Thanks to changes in the state law since the August primary, the City Clerk must notify voters if there is an issue with a voter’s ballot. There is no cut off for notification prior to Nov. 3, according to the Michigan Secretary of State’s office. But, time is running out. Voters have until 8 p.m. on Election Day to fix an issue with their ballots.

With it being so close to Election Day, election officials say it’s safest to go to the City Clerk’s clerk’s office to deal with a ballot issue. Tell officials you want to “spoil” your ballot. That means you want to void a ballot you previously cast and cast a new one.  The deadline is 4 p.m. Monday to go in person to spoil your ballot. You can either request a new absentee ballot or vote in person.