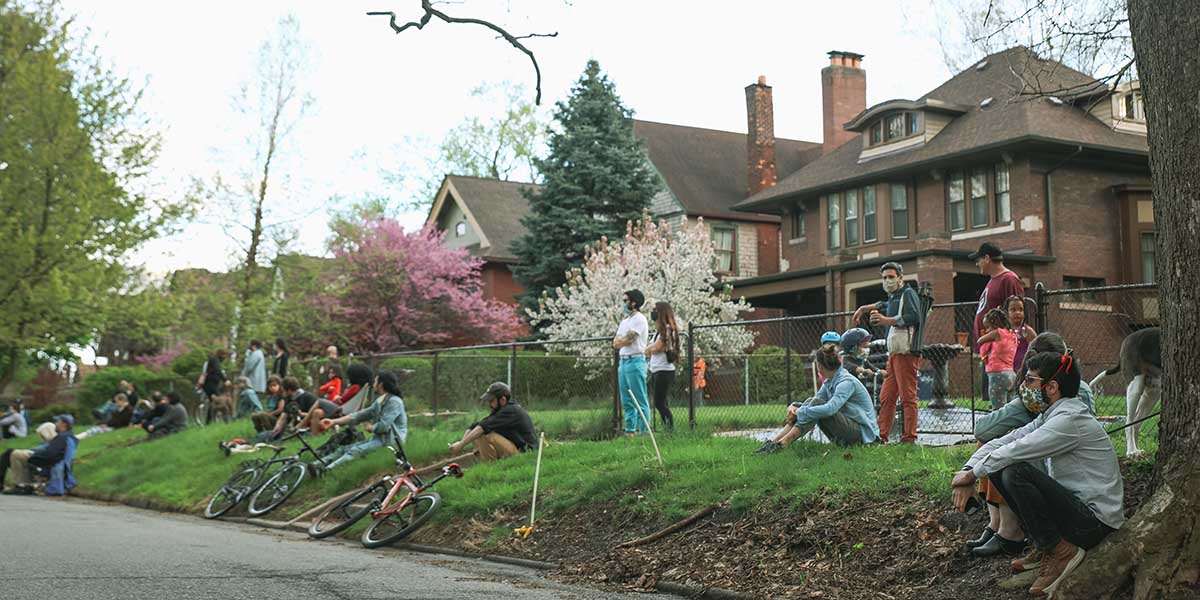 Detroit looks like this: Neighbors and friends gather on Vinewood Street, as part of a social ritual that grew amid the pandemic. (Photo by Bre’Ann White)

“Talk to a Human” events on Vinewood Street started 10 weeks ago, when COVID-19 had just begun to take the lives of Detroiters.

The normal routines for most had already been destroyed.

“People already had a sense of dread; waiting for the peak to happen,” said Vinewood resident Kim Hunter. Many had hunkered down in their homes. Schools statewide, from preschool to colleges, were ordered closed. Most businesses had already voluntarily shut.

The number of Detroiters testing positive for coronavirus was tripling every few days. “We knew there was going to be a lot of sickness and death, and we didn’t know who it was going to hit,” Hunter said. 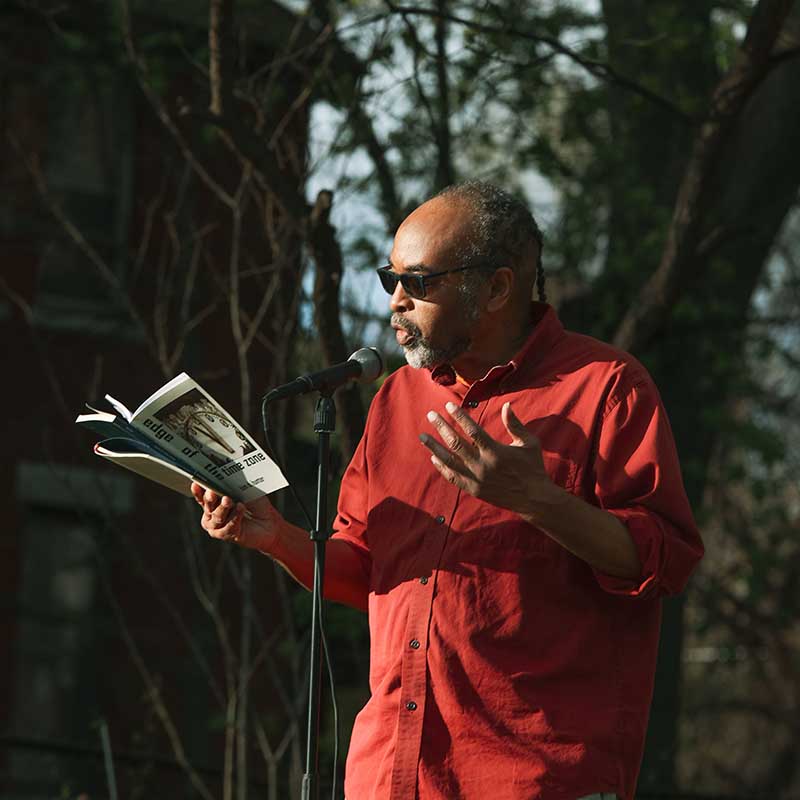 Detroit author and social justice activist Kim Hunter reads one of his poems to his Detroit neighbors. (Photo by Bre’Ann White)

Talk to a Human is a simple idea: Neighbors get out of their homes at the same time to see each other, maybe talk a little. Hunter, an author and social justice activist, championed the idea ever since it was suggested a few days earlier on the neighborhood’s listserv, the mass email/group discussion reserved for residents.

So, on Friday, March 20 at 7 p.m., Kim Hunter, his wife, Kathryn Savoie, and their daughter Anika, along with their dog Pretzel, walked out of their historic Vinewood Street home in the southwest Hubbard Farms neighborhood. They stood on their front lawn, bundled up in winter coats on a chilly evening, and looked for neighbors.

It took about 30 seconds. A smiling woman walked by, said hello, momentarily slowed in front of the family, but kept walking. Then a young couple passed by, waved, gave a thumbs up, and kept walking. Social distancing was a new concept in late March.

Then Kim spotted a couple about eight houses away. Like the Hunter/Savoie clan, the couple were standing in their front lawn.

“HELLO NEIGHBOR!” Kim yelled and frantically waved.  The couple frantically waved back. “HELLO!”, the couple yelled back.  Within minutes, at least 10 people had gathered in a safe social distance manner around the Hunter/Savoie home.

Thus, began a ritual that has become an emotional refuge amid a deadly crisis.

“We don’t have each other the same way we once did,” said Suzanne Brown, an assistant professor at Wayne State University’s School of Social Work. “People often distract us from negative thoughts and they can soothe us. They can help us see this is not necessarily Armageddon.

“I love what these folks are doing to fight isolation,” said Brown, whose research includes studying social networks.

“I love what these folks are doing to fight isolation,” said Suzanne Brown, assistant professor at Wayne State University’s School of Social Work.

Beyond widespread death, the coronavirus is causing a mental health crisis worldwide among the living, the United Nations warned last week. Isolation, fear, uncertainty about the future and economic loss are taking deep emotional toll on humans, the agency reports.

One of out three Americans are experiencing depression, and 1 in 2 are feeling high levels of anxiety due to the pandemic, according to an April nationwide survey by the University of Michigan School of Social Work.  Drinking and drug use are up significantly, various studies have found.

Fear of the virus hit home for Kim Hunter and his wife earlier than many Detroiters. Their 23-year-old daughter, Anika, was living in New York City, chasing her dream of becoming a professional dancer. The nation’s largest city had been shut down by the virus by March 16,  a time when Detroit had one reported case.  They rushed their daughter out of Manhattan and back to their Vinewood home.

“We are extremely happy to have her home,” Hunter said.

A few days after Vinewood’s first Talk to a Human, Detroit and the state went into official “stay-at-home” existence. By then, Detroit had one of the highest infection rates in the nation, at 83 cases per 100,000 residents. That was five times the statewide rate. The number of Detroiters dying and testing positive for the virus would surge for three weeks.

The Vinewood meetup became a daily ritual. As the crisis deepened, the talk among neighbors remained decidedly casual: small talk about the weather, lawns, baking, etc. It wasn’t a suggested rule, it happened naturally.

“I love that most of the time we’re not really talking about anything other than normal neighbor stuff,” said Hubbard Farms resident Shaun Nethercott. “Because every day I’m in my house and sometimes it’s like – blah! It’s too much stuff to take in.”

The “blah” for Shaun Nethercott and her husband, Wes, comes in many forms, the couple said. There is the challenge of staying home for hours. “That alone puts us in a more restless state. It  feels unnatural,” Shaun said.

The couple co-founded the Matrix Theatre Company in Detroit. They have taken bicycle trips across the U.S. and other lengthy treks. Four years ago, they hiked the 500-mile Camino de Santiago trail in northern Spain.

“We had to learn how to negotiate our space together because we were getting a little snappy with each other,” Wes said. Now, they have morning coffee. Shaun goes to work in her basement office. Wes, a retired public school teacher, reads, writes a bit, and meditates. They have dinner together.

The two confessed news junkies both learned quickly to severely limit that habit. “That was a pure survival tactic,” Shaun said.

But when the Nethercotts walk over to Vinewood to see neighbors, they talk of none of their inner turmoil. “It’s really nice to not talk or think about those things and just have a normal chat,” Wes said.

The sleeping patterns of many residents have been thrown out of whack. Steve Tobocman’s two grade-school children having nightmares. They fear someone is coming into their room, he said.  “It happened before the coronavirus, it’s by far more frequent,” Tobocman said.

Tobocman is having no trouble sleeping. “At the end of the day, I’m more exhausted than I have ever been,” he said. That’s saying something. Last decade, Tobocman served two terms in the Michigan House of Representatives and was the former Democratic Minority Leader his last term. He now runs Global Detroit, a regional economic development organization advancing immigrant-inclusive strategies  He is used to working up to 80 hours a week.

By April 1, a horrifying trend became clear in Detroit: It was hitting the African-American community hard.  Detroit is 79 percent African-American. In early April, black Detroiters made up 26 percent of the state’s infections and 25 percent of its deaths.

Around that time, the Vinewood ritual became more elaborate. Friday nights became performance night. More than 30 residents would show up as they spread out along the street and watch a neighbor perform from their home.

Kim Hunter, who has published two collections of his poetry and a book of short stories, read some of his work. His daughter, Anika, debuted a modern dance piece on the front lawn. The piece was based on isolation.

Robert Andersen, who teaches film studies at Oakland Community College, began to give performances on his porch with his ukulele. Andersen dug deep and first performed a couple of songs from an album that fascinated him in high school; a 1974 album from the progressive rock band Genesis, “The Lamb Lies Down on Broadway.” 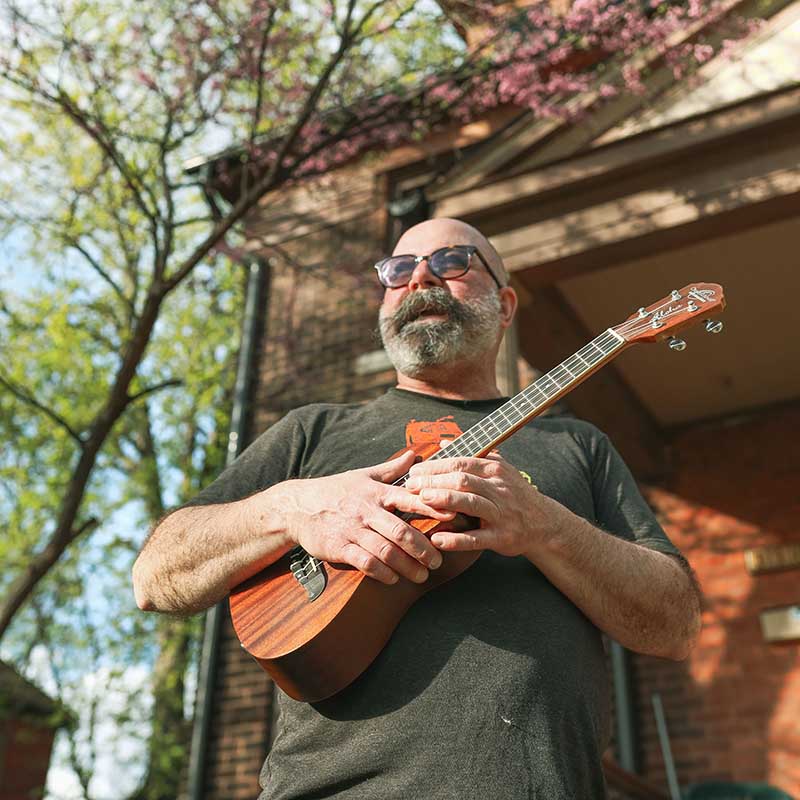 Hubbard Farms resident Robert Andersen and his ukulele. He’s one of several residents who have performed on Vinewood for their neighbors during the pandemic. (Photo by Bre’Ann White)

“It’s a concept album about a Puerto Rican teenager from New York City who embarks on a journey of self-discovery, and encounters bizarre incidents and meets all these strange characters,” Andersen said.

“It’s much heavier than a simple magical fairy tale. It felt connected to kind of what we are going through now, a rough journey,” Andersen said. One of the songs he performed is called “Cuckoo, Cocoon.”

On the week that Grammy-winning performer Bill Withers died, Andersen played “Lean on Me.” It became a mass sing-along.

“It does good things to my mental health to say hello to neighbors and see them smile,” Bill Gourlay said, a Vinewood Street resident.

By late April, death came to Vinewood. Juana Carreon, a former resident who recently moved into a nursing home, died. She was 100 years old.

Then on the night of April 22, Andersen felt his heart race. He had a chill. He went to his primary care physician the next day. She immediately recommended Andersen get tested at the former State Fairgrounds.

Andersen had to cancel a Friday porch performance. It was suggested on the neighborhood listserv that maybe Talk to a Human be postponed because of Andersen’s health scare. But other residents insisted it continue, even without a show.

Vinewood resident Bill Gourlay didn’t want to give up the opportunity of simply gathering. “It does good things to my mental health to say hello to neighbors and see them smile,” Gourlay said. 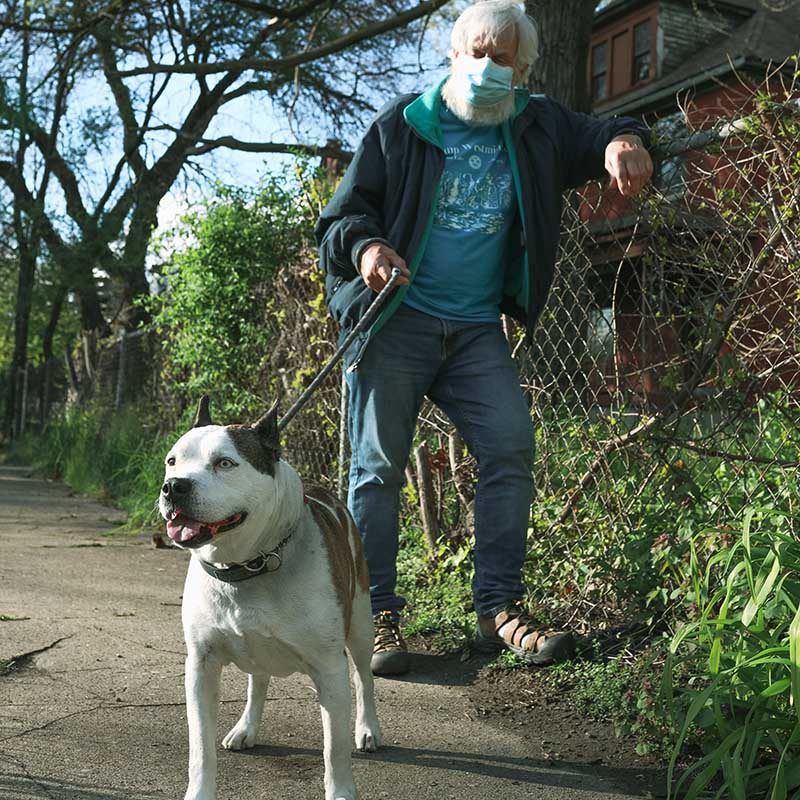 Three days after getting tested, Andersen got his results: “Virus undetected.”

Last Friday, when a warm, sunny spring day finally emerged, the Friday night Talk to a Human drew over 60 people. Kim Hunter read a few short poems. Then, from the porch of Andersen, the recording artist and Vinewood resident Danny Kroha– well-known for his days in The Gories, the Demolition Doll Rods, and other acts – performed a short solo set. It included a traditional African- American spiritual,“ (Hold On) Keep Your Hand on the Plow.”  Since the pandemic began, Kroha has been listening to the song often; specifically a version performed by gospel legend Mahalia Jackson. 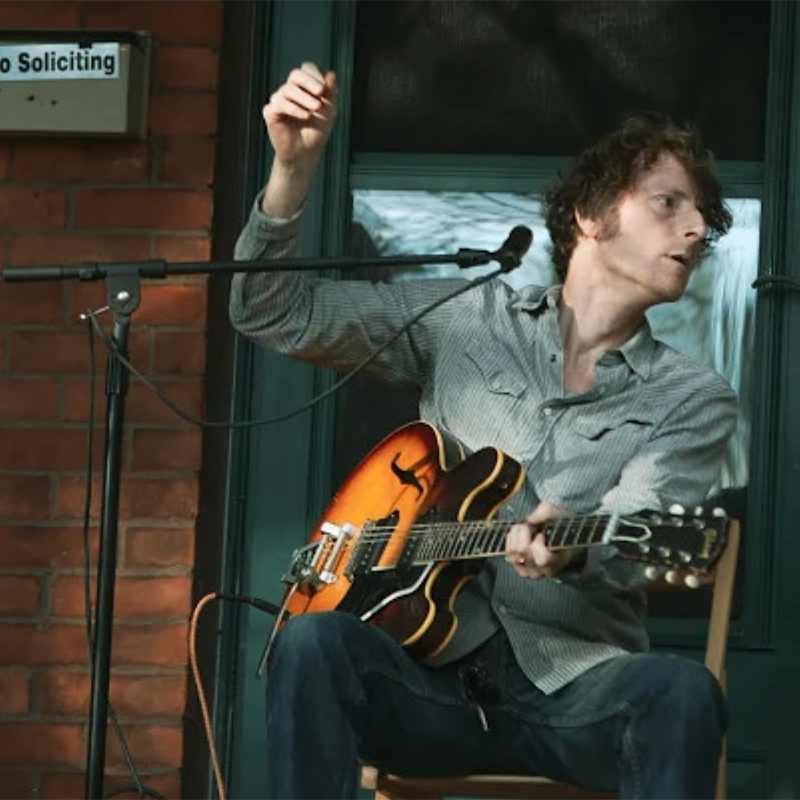 The coronavirus has cancelled Kroha’s summer tour. “I am kind of wondering if touring is ever going to be the same again. That’s just one of the big questions I grapple with, and, you know, it makes me feel anxious. A lot of big questions are making us anxious these days” he said.

“But, I’m happy to be playing for my neighbors. We all need to support each other right now.”