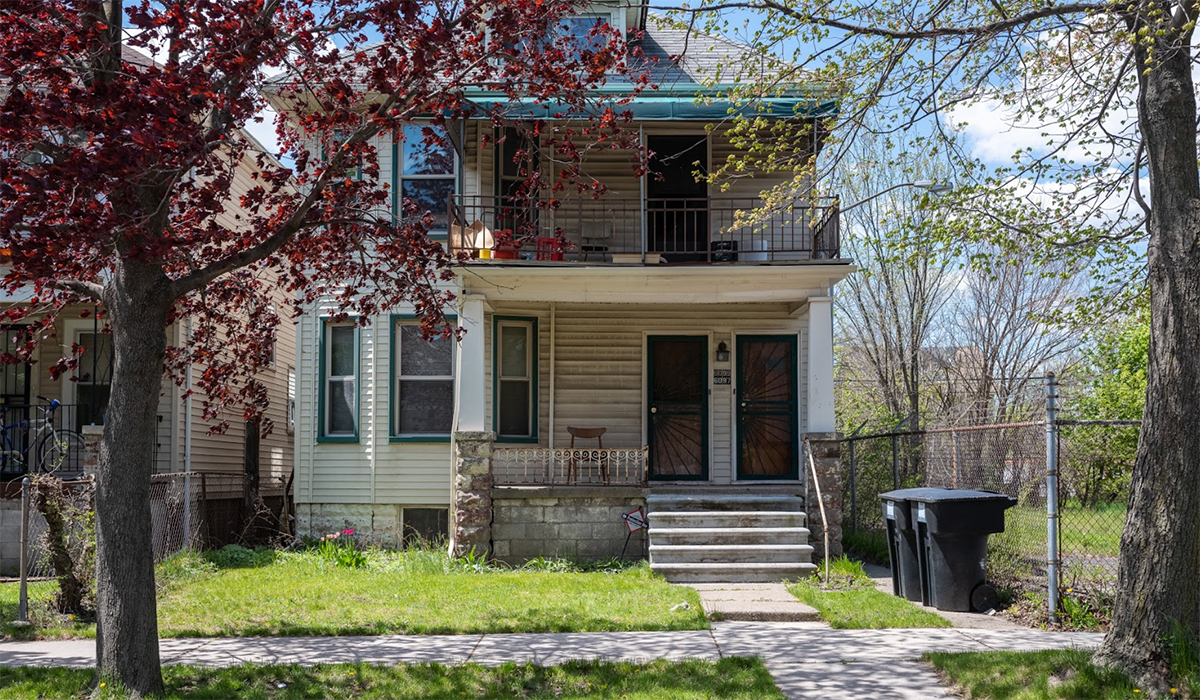 A house on Detroit’s east side. Photo by Ralph Jones

If you thought Detroit’s housing market was challenging at best, the spread of COVID-19 has made it that much more complex.

Less than half of city residents own their home, according to Rent Café’s recent rental market trend data. This is troublesome for tenants whose job security and financial stability have been threatened, even with a series of recent local, state and federal policy changes that were created to provide residents temporary support. Local housing support organizations now worry about an influx of eviction notices when the 36th District Court reopens May 28.

“We’ve made over 250 calls in the last six days, so a lot of folks are still in trouble…The level of trouble, we don’t know.” -Ted Phillips, UCHC

Congress was expected to vote on the Health and Economic Recovery Omnibus Emergency Solutions Act (HEROES Act), a second coronavirus relief package that would include rental housing assistance, as of May 18.

Ted Phillips, executive director of United Community Housing Coalition, says he’s concerned about upcoming evictions due to the number of judgments filed, and now in backlog, at the 36th District Court before the court closed on March 13.

UCHC staff said they found 3,700 eviction cases were scheduled and heard at the 36th District Court between February 1 and March 13. Of those cases, there were 2,600 judgments including 463 orders of eviction and 99 borders pending fines. Phillips said by mid-May UCHC had received 325 calls for assistance.

Due to court closures, it’s unknown whether those tenants moved or have remained in homes throughout Whitmer’s stay-in-place order.

UCHC, a local nonprofit that helps families retain their homes, changed their tax foreclosure hotline into an eviction hotline during the pandemic.

“We’ve made over 250 calls in the last six days, so a lot of folks are still in trouble,” Phillips said in an interview the first week of May. “The level of trouble, we don’t know.”

John Collins, an internationally known Detroit-based techno and house music disc jockey, said having a positive relationship with his landlord has made a difference to his financial well-being the last few months. Collins has worked with Red Bull Radio and has made appearances at Detroit establishments like Marble Bar, Motor City Wine and others. Originally booked to work through August, Collins said most of his gigs were canceled or postponed due to the increase in COVID-19 cases. 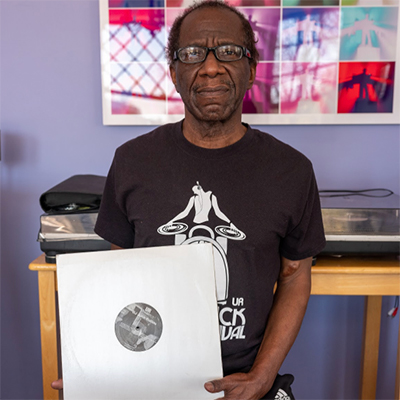 John Collins, a Detroit-based and internationally known DJ has rented an apartment in West Village for several years. (Photo by Ralph Jones)

A longtime resident of the West Village neighborhood, Collins said he knew he needed to approach his landlord about changes to his monthly income.

“I explained the entire situation and the fact that this is something nobody thought would happen,” Collins said. “Because of the type of person he is and our relationship, he gave me a 90-day deferment.”

Collins says he remains optimistic. Some of the in-person events he was scheduled to work will be made available online, affording him opportunities for minor cash flow. However, the artist says he realizes the impact of COVID-19 has left many Detroiters with few options.

“When you’re an artist you sometimes live from gig-to-gig,” Collins said. “It’s a different type of existence and it can be very discouraging and depressing.”

Not every tenant has a positive relationship with their landlord and some Detroiters are at greater risk of being taken advantage of for not knowing their rights. 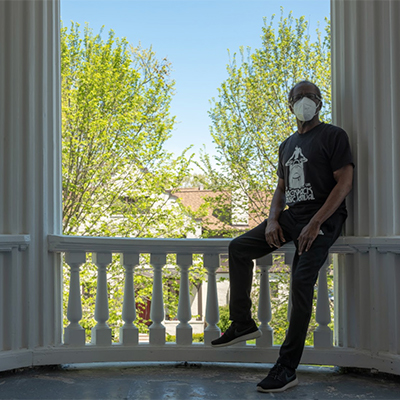 John Collins, who sits on the porch of his West Village home, approached his landlord about alternative rent payments after many of his spring and summer events were canceled amid the COVID-19 outbreak.  (Photo by Ralph Jones)

Delores Ingram said she has tried to help her cousin, who did not want her name used for this story, find a rental property for months. Ingram’s cousin, who said she lost ownership of her home while in a coma, needs an ADA compliant rental property due to physical limitations.

Ingram said they looked at two properties in the 5200 and 5500 blocks of Cadieux Street. The pair said they gave the property owner a $1,000 security deposit in December 2019 with an expected February move-in date as another tenant occupied the dwelling at the time. But the previous tenant never vacated the premises and Ingram said the property owner kept the security deposit.

As of May 8, neither of the Cadieux Street properties were registered with the city of Detroit. In November 2017, a city ordinance was passed requiring property owners to register rental properties with the city to ensure homes are up-to code.

Jason Hill, Collins’ landlord and broker at Historic Realty Detroit, said not everyone can afford to go through a licensed agency to find a vetted rental property.

Historic Realty Detroit is a boutique company that primarily serves tenants and landlords in downtown Detroit. Data from Historic Realty show their property sales from December 2019 to March 2020 were almost double the number of listings sold or rented during the same period in the previous year.

According to Hill, Detroit’s housing market is in a “gray area.”  Demand for rental properties remains high but some tenants and landlords are practicing extra caution, making it more difficult for residents with intermittent and unreliable income or rental history to find housing.

Governor Whitmer’s current stay-in-place order expires May 28, but she allowed realtors, construction and outdoor employees to return to work May 7. However, realtors may only conduct in-person showings by appointment, the current tenant must have already vacated, and no more than four persons may be at a property at a time.

As a response to the spread of COVID-19 and to maintain business, the property broker said many leasing companies have moved operations online. Hill said viewing properties online has become  popular, but still poses a barrier for Detroiters without reliable digital devices and internet streams.

With ongoing uncertainty, local housing experts suggest Detroiters learn their rights as tenants and reach out to local organizations that  can provide support.

Charles Hobbs of Street Democracy, an organization that provides criminal and civil legal services to Detroit’s homeless population, said judges from local courts have discussed the potential rise in evictions.

“I’m optimistic about the courts at least paying attention and trying to mitigate the risk of being unlawfully evicted,” Hobbs said.

The Street Democracy attorney said tenants should speak to their landlords first to avoid court processes. If talking doesn’t work, Detroiters who have received notices to quit from a landlord should contact the Attorney General’s office.

Phillips also said renters who are unable to make consistent rent payments should speak to their landlord and review their lease to ensure there isn’t an automatic lease renewal clause. The UCHC executive director said he’s heard that some tenants are paying portions of rent during this time rather than nothing at all. Tenants choosing this option should be cautious, as not paying rent in full can still be cause for eviction.

“I don’t recommend people to stop paying the rent under some grand hope from government that no one has to pay rent,” Phillips said. “I don’t see that happening.”

UCHC has become an important stakeholder in the effort to stem tax foreclosure in Detroit but during the pandemic the organization recognized the growing need for eviction assistance. Phillips said UCHC prioritized contact with residents who had eviction notices in February and March. The nonprofit also hosts free consultation services during specific hours to help residents learn their rights.

While Street Democracy and UCHC have extended assistance to residents most in need, free resources are also available online through the 36th District Court, MichiganLegalHelp.org, and the Landlord/Tenant Handbook published online by Michigan State University’s Law School, which is also used by the state legislature.

Most importantly, housing experts say tenants need one thing during this time:

“Have something in writing from the landlord saying that you will not be evicted that could hold up in court,” Phillips said.

This story was produced in partnership with Outlier Media. Text Detroit to 73224 for more info and resources you might need to navigate COVID-19 in Detroit.